Bitcoin Price Risks Dropping Below $10,000 if This Support Level Fails

The price of Bitcoin is at risk of falling below $10,000 if a crucial support level fails to hold.

As the price of Bitcoin (BTC) couldn’t break through the resistance level of $12,000, a retracement did not come as a surprise. In recent days, BTC/USD pulled back to $11,400, a correction of almost 10%. 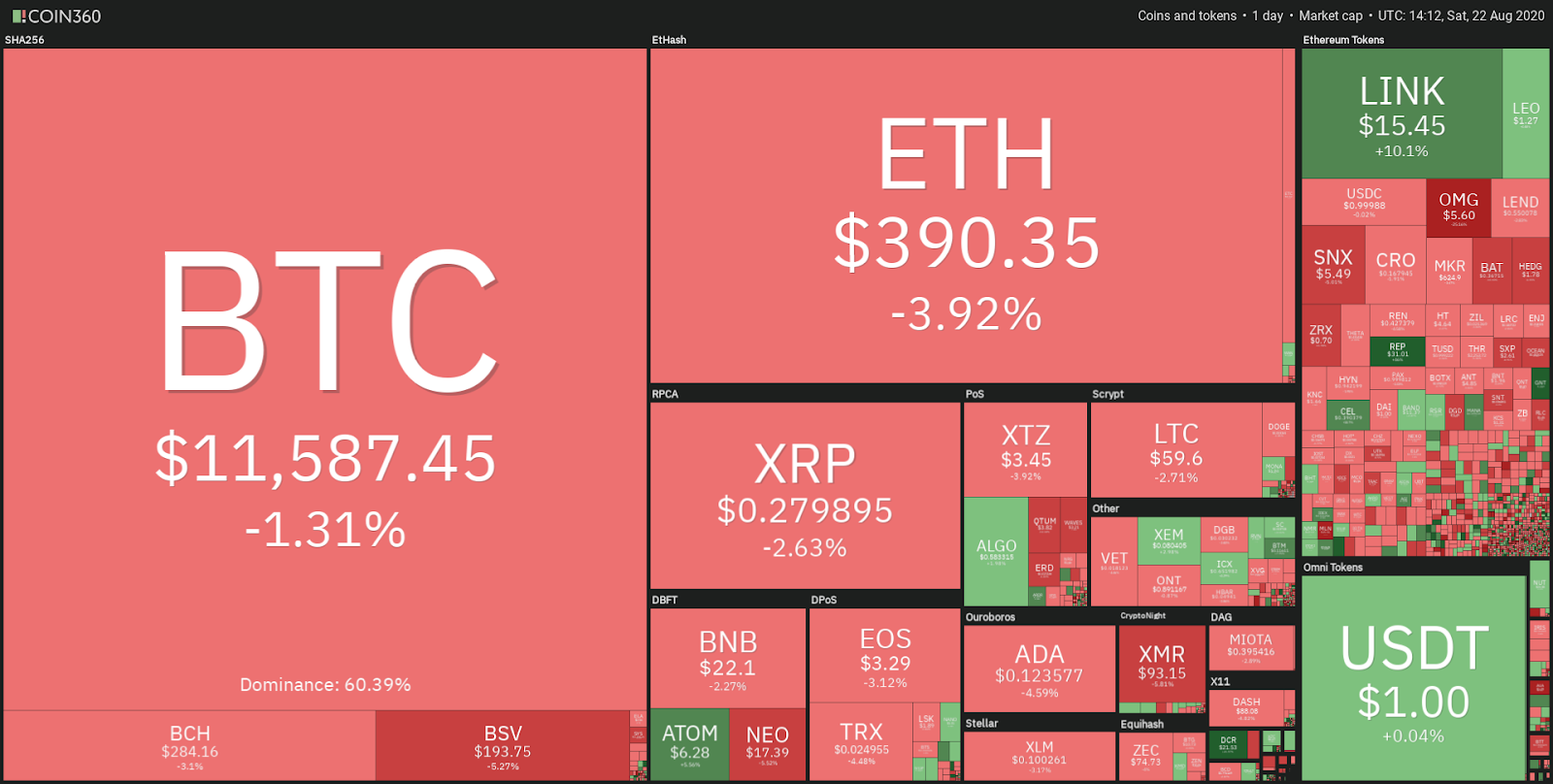 Meanwhile, gold, silver and other commodities are also correcting due to a slight bounce of the DXY, or the U.S. Dollar Currency Index.

What’s more, multiple heavy movers like Chainlink (LINK) and Tezos (XTZ) also showed substantial corrections in recent days. Can this be a moment to buy the dip, or are further revisions imminent? Let’s examine the charts.

Bitcoin rejected at $11,800 after breaking back in the range

The price of Bitcoin couldn’t force a breakout above the $12,000 resistance level, which led to a drop back into the range.

As discussed in the previous article, the $12,000 area was crucial to hold for any further upward momentum. It failed to sustain this support, which means that a pullback became likely.

Such a support/resistance flip generally means more downside as the buyers aren’t strong enough to force the price above this resistance level. Given the weakness of such a move, more support levels below may get tested.

This is indeed what happened as BTC then dropped toward the next support level, which is the green zone, and the final crucial hurdle before a potentially quick drop to $10,000.

This key support level must hold

As the recent low is found at $11,200-11,300, the market needs to stay above the green zone and recent low for a chance at more upside in the short term.

If the price of Bitcoin drops below the green zone, the next support zone is found at $9,600-10,000, and more pain for the bulls is on the horizon.

There are several examples of invalidated bearish divergences found in recent years. One of them is shown in the chart (April 2019) and it’s looking similar to the current price action.

The potential bearish divergence was spotted on the charts here as well. However, it was never confirmed as its latest low held as support. Given that the structure remained intact (higher lows, higher highs), the market continued climbing higher as Bitcoin rallied to $13,000.

The overall conclusion is that the current price action reminds me of a lot of the price action the market saw in April 2019, and history could repeat as long as $11,200-11,400 holds.

The bullish scenario depends on the $11,200-11,400 support level as mentioned previously.

As long as this area sustains support and Bitcoin reclaims the $11,800 area as support instead of resistance, more upside should be expected.

Similarly, the $11,200-11,400 support level is also crucial for the bears. If this level is lost in the coming week, further downward momentum is likely, particularly toward the open CME Bitcoin futures gap at $9,7000, which is also a significant support level.

However, before this can happen, a potential retest of the $11,800-12,000 should not come as a surprise. In that regard, there are two crucial zones for the bulls and bears.