Bitcoin price has closed October green, a first since June, and now has key moving averages on track to cross bullish in November.

So far, Friday has brought a small gain to Bitcoin price of around 0.39%, but down over the previous 24 hours by 1.61% with the retrace also being seen among the other major coins.

The Bitcoin chart clearly shows that BTC has been selling off since making highs of almost $14,000 back in June. 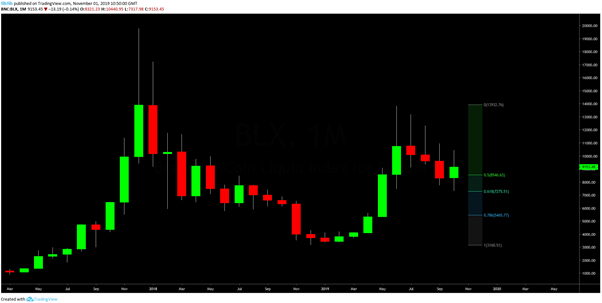 The price lows $7,000s in October represented a 61.8% retracement of the entire 2019 move and the first green candle in 4 months. Overall, Bitcoin has not made a new monthly price high and price would need to trade across October highs of $10,350 to show bulls are stepping back in. 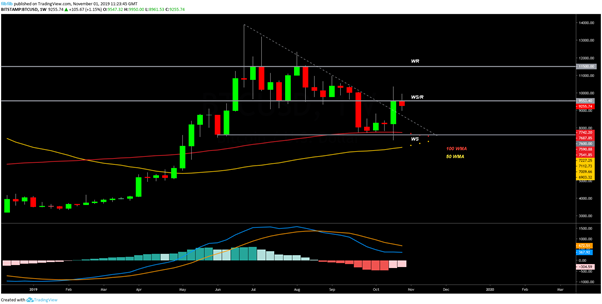 The weekly chart shows that Bitcoin did break and close above the diagonal resistance that has been in place for 16 weeks, but was met by former support at $9,500, now acting as resistance.

The Mac-D (moving average convergence/divergence) indicator further highlights that bearish momentum is flagging in the market.

However, the100 week moving average (WMA) has been acting as support for 6 weeks and is on track to cross bullishly with the 50 WMA towards the end of November. This would be a first since 2016, which highlights that Bitcoin price action has been moving higher as a whole.

The 50/100 WMA previously crossed in anticipation of the halving in 2016 and resulted in a 75% price appreciation. Therefore, this could be indicative of what may lie ahead given that the next Bitcoin halving is about seven months away.

Closing above $9,500 remains the objective for the bulls. When the price has been supported above this level, fast moves to test $11,500 have followed. Bitcoin has failed to close above $11,500 since January 2018, so clearly, this would be the next objective should the bulls make a breakthrough. 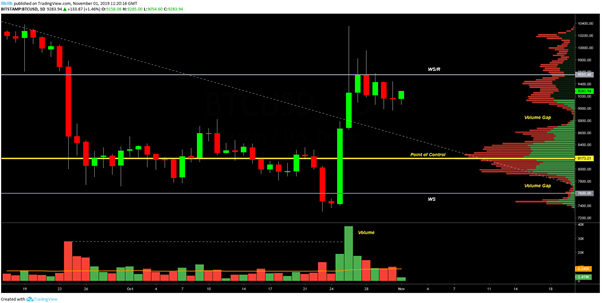 The chart illustrates the significance of the buying volume, which took Bitcoin up to current prices, with it surpassing that of the volume down. This demonstrates that there are clearly buyers in this market at lower prices, with most of the traded volume recently occurring at around $8,200.

The VPRV indicator highlights that there is a gap in volume traded through price levels below $9,000 meaning that a failure to defend this price will potentially mean a fast move down to retest previous resistance in the mid $8,000s. 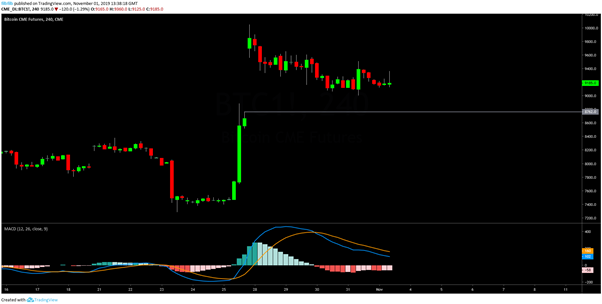 The CME Bitcoin futures have a gap in price action as a result of a large move to the upside last weekend. The gap currently lies at $8,762 and since reopening, momentum has clearly been moving down to fill the gap.

Although there was some erratic trading yesterday evening on some exchanges, the CME gap has not been filled at their exchange. Thus, the gap-filling narrative has not subsided and poses a threat should price action continue to fill weekend gaps as has commonly been the case.

It is worth noting that there is also one remaining CME gap in price action above weekly resistance, up at $11,695 and if one is to make a bearish assumption about filling gaps, it would imply that eventually this upside price gap should also be destined to get filled eventually. 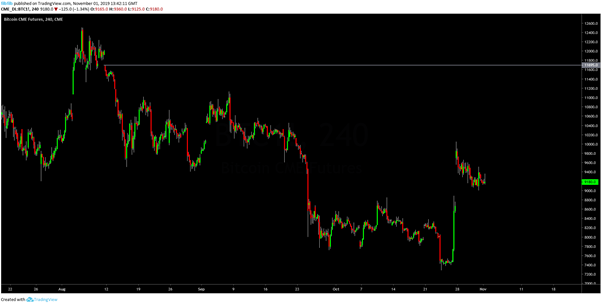 The 4-hour chart shows that Bitcoin has been held down by the 20 period moving average and price action is generally tightening within the Bollinger bands. 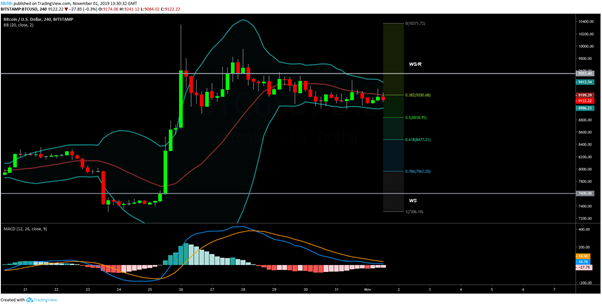 BTC/USD will need to break resistance at $9,200 and find support at this level to avoid retesting the lower $8,000 levels as mentioned earlier.

The Mac-D continues to be above zero and the higher lows on the histogram are implicit that the bulls could attempt to push higher early into the weekend, with $9,500 being the level to close above — something that has only briefly been achieved in prior periods last week.

A breakdown lower would potentially be met with buying interest at the 61.8% retracement level.

Key weekly close for the bulls

Overall, Bitcoin price is faced with a clear resistance of $9,500 which needs to be overcome by the bulls fairly swiftly to avoid spending further time in the range that has traded in the low $7,000s.

There is clear buying interest at prices towards range lows, but if the bulls cannot surpass the $9,500 level, the mid $8,000s will be telling. Should buyers feel they missed the range lows, we should see a strong response at this price point.

A move back into this range could see Bitcoin trade out the remainder of the year below $10,000 but with the halving next May, some may see this as a continuation of accumulation opportunity.

A weekly close across $9,500 would potentially see a fast move to the upside with short-sellers and those missing out on the $8Ks likely to drive prices high relatively fast as has been previously seen when Bitcoin breaks $10,000 with momentum.