Bitfinex: The Rumors of 'Insolvency,' Banking Partners’ Escape, and the Suspension of Fiat Deposits

Fiat deposits are available on Bitfinex, but rumors about its insolvency haven’t been fully dispelled.

On October 8, Hong-Kong-based exchange Bitfinex has announced that it is not under the immediate threat of insolvency and the related rumors are unsubstantiated, as well as false. According to the company’s press release, all cryptocurrency and fiat withdrawals are and have been processing as usual without the slightest interference.

After some mild clarifications, tension is rising in the crypto community – the spread between Bitcoin prices on Bitfinex and other exchanges, on October 15, reached $1,000 against the massive sale of Tether (USDT). In the meantime, Bitfinex is testing its improved solutions, it remains to be seen about the possible consequences for the crypto industry and to be confirmed that this is not a repetition of the story with Mt.Gox, which some traders draw a parallel to, but simply the implementation of a “new and increasingly robust fiat deposit system”.

The transparency of the work on one of the leading cryptocurrency exchanges has been questioned as early as October 2. The reason for this was the financial problems of the Puerto Rico’s Noble Bank, which was allegedly engaged in servicing the operations of Bitfinex and Tether Ltd (Bitfinex owners are the beneficiaries of Tether). As reported, the bank has filed for bankruptcy and is now searching for a buyer.

The news about the financial problems of Noble Bank was first published on Sept. 30, 2018. The information came from an insider, who reported on the possibility of a quick liquidation of the bank if it wouldn’t receive support from the holders of large amounts of Tether. The non-publicized connection of the bank with Bitfinex accounts were revealed by the BitMEX exchange researchers. 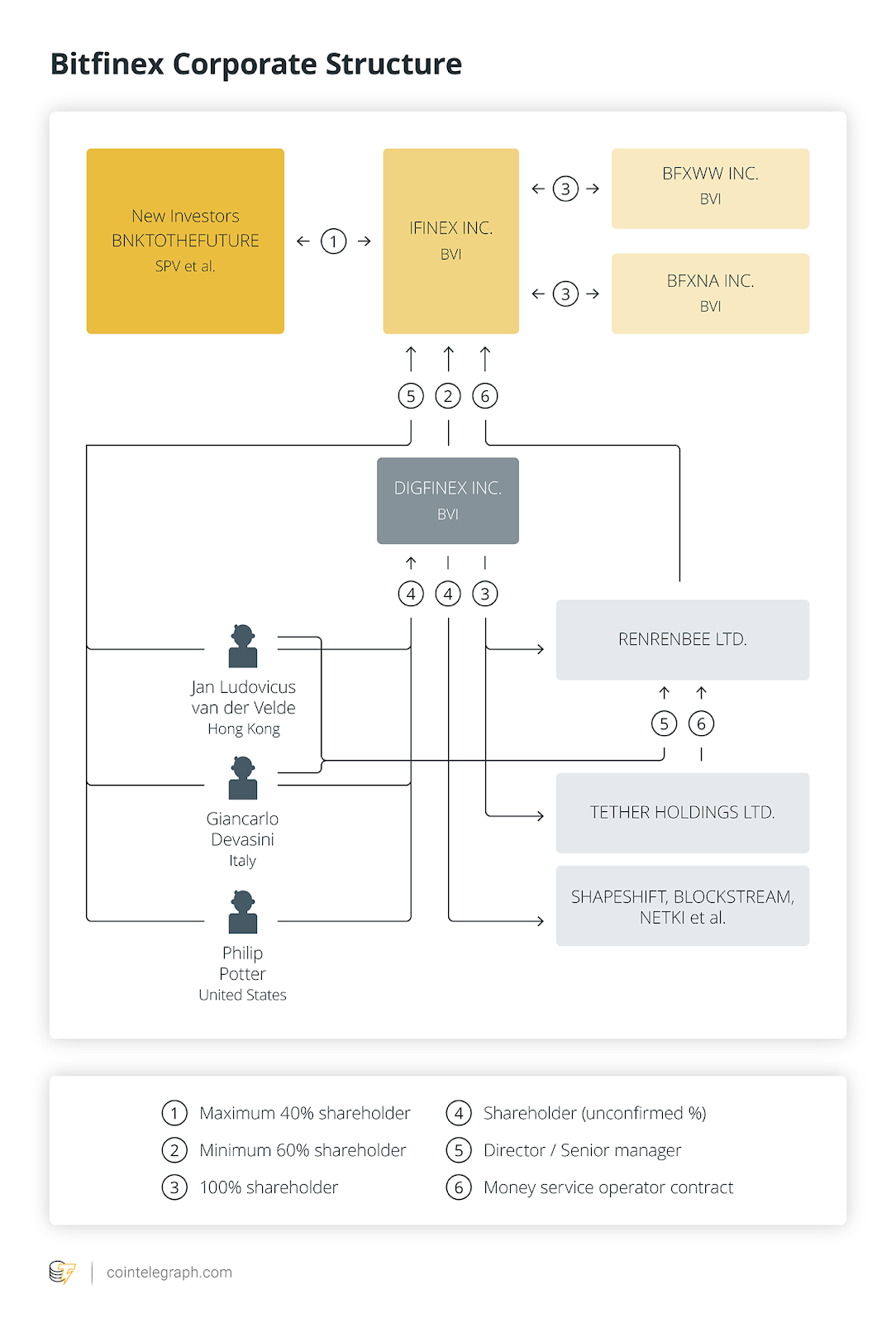 The cryptocurrency trading platform has dismissed that notion, stating in a Medium post that “stories and allegations currently circulating, mentioning an entity called Noble Bank, have no impact on [their] operations, survivability, or solvency.”

A day before the above post, Larry Cermak, a chief analyst at The Block, tweeted that Bitfinex had engaged HSBC as its new banking partner:

Bitfinex is now banking with HSBC through a private account of Global Trading Solutions. Very good fit if you ask me. It's also worth mentioning that all EUR, JPY and GBP deposits are paused but Bitfinex "expects the situation to normalize within a week". Banking issues? pic.twitter.com/1pxQ13NO0m

Bitfinex has faced challenges with banks before. Thus, on April 18, 2017, the exchange suspended fiat withdrawals and reported that several Taiwanese banks, with which it cooperated, had repeatedly blocked its transactions.

A cryptocurrency fund manager, Jacob Eliosoff, suggested that those withdrawal issues could create new pressures within the industry of digital money:

“This is a dynamic many of us remember from the Mt. Gox days when there were problems with fiat withdrawals. Investors responded by converting fiat they had on the exchange to Bitcoin so they could withdraw it. They buy Bitcoin to withdraw, pushing up the price on the exchange.”

A little earlier, in the second half of March, U.S. bank Wells Fargo & Co. suspended its services related to processing Bitfinex’s transactions. On April 5, the latter filed a lawsuit against the bank which was quickly dropped.

The rise of allegations

On Medium, a user called Proof of Research, wrote a detailed article titled “Bitfinex is No Longer Solvent – Remove Your Money Now” where he highlighted the difficulties in withdrawal issues that many users of the exchange have been facing.

The article is no longer available publicly, since the user’s account is now suspended. The blogger pointed out complaints, posted on Reddit, by users who were censored by Bitfinex moderators. Additionally, throughout the previous week, there were a series of complaints about poor customer service and the inability of stopping the infinite loop of currencies being loaned out on the platform. All of these reasons could have accelerated rumors that Bitfinex has become insolvent.

Tether’s in the mix

The concerns over Tether are not new. Bitfinex has been accused, by numerous media and industry representatives, of not being transparent on the audit of Tether, raising a lot of concerns over the 1:1 peg of the stablecoin. Notably, the crypto market is dependent on Tether currency, which is the eighth largest cryptocurrency, with a market cap of $2.2 billion. Furthermore, there are many crypto exchanges like OKEx, which are dependent on this cryptocurrency, as Tether is the second most traded crypto coin.

Last time Tether and Bitfinex proved the existence of real fiat money behind their tokens, after the community had repeatedly expressed scepticism with regard to banking audits and the source of funds. On June 20, Tether’s general counsel, Stuart Hoegner, stated that the number of USDT issued was equal to $2.54 billion, which almost coincided with the numbers reported by Coinmarketcap.

However, this week marked a sharp fall for the USDT price. During the Asian trading session on October 15, before the opening of trading in Europe, Bitcoin unexpectedly rose in price. 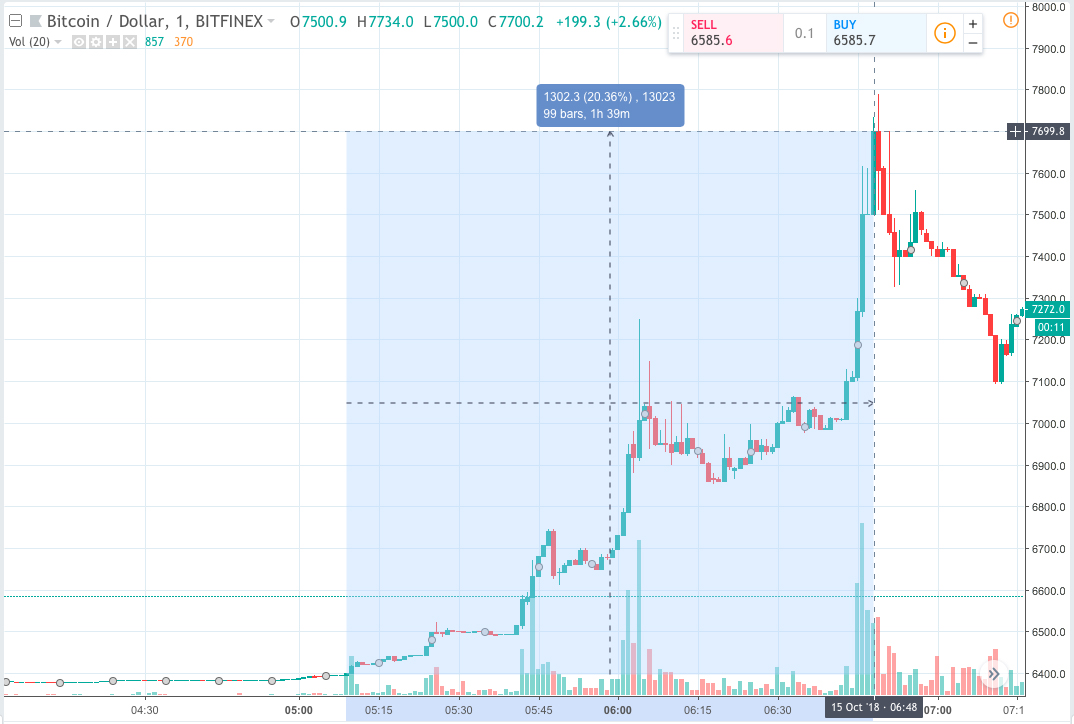 On Bitfinex, its exchange rate jumped by 21.9 percent to $7,788. The spread between Bitmex and Bitfinex reached $970.

It was suggested, by some users of the Bitcoin community in Reddit, that the price of Bitcoin on Bitfinex was caused by the massive sales of Tether. On exchanges such as Bitfinex, Bitmex, Binance, where the USDT was trading, the highest volatility of the coin was observed.

What was Bitfinex’s response?

On October 7, Bitfinex denied all of these allegations in a blog post, stating:

“Bitfinex is not insolvent, and a constant stream of Medium articles claiming otherwise is not going to change this.”

To further back its statements, the exchange representatives referred to the links leading to their key cold wallets where the main reserves are stored:

Firstly, Bitfinex revealed that it held BTC valued at over $1 billion, ETH valued at over $400 million, and $200 million worth of EOS. The management pointed out that this is just a fraction of what their cold wallets contain.

Additionally, Bitfinex stated that these wallets represented only a small part of their holdings, not considering the fiat holdings of any kind. They also clarified that all deposits and withdrawals were functioning normally, although “problems in fiat transactions exist, as they do for most crypto organizations.”

In an updated press release on Oct. 15, 2018, Bitfinex has clarified the following:

The exchange, with this short and informal announcement, took into consideration the concerns this event has caused to the cryptocurrency industry, and promised to implement a new and increasingly robust fiat deposit system to be available in the next 24 hours. And though it has kept its word, according to a press release posted on October 16, amid upgrading their order system, other questions have arisen.

Today we are happy to announce the release of the Honey Framework, beginning with an Algorithmic Order Library for creating custom, complex order types on Bitfinex.https://t.co/fWCvQnGKNX

Over the last few weeks you guys have almost done everything possible to create this FUD yourself-from deleting user questions on Reddit, to running away & hiding. Why aren't you allowing an independent audit? Why is your CEO not visible anywhere like Binance's or Coinbase's?

The speculators and Binance

At the same time, unconfirmed news and rumors claiming that Binance may delist USDT in the near future have spurred across Telegram groups and sent by email.

FAKE: Saw this floating around and it's an obvious fake. Binance is VERY politically correct and will never write "Tether big scam" (it doesn't even make grammatical sense). This is just as bad as the "Vitalik is dead" scam last year. @cz_binance @binance pic.twitter.com/bd9Anvclmt

In a tweet, Changpeng Zhao, Binance’s CEO has commented “too much FUD” regarding this situation. Two days earlier, CZ argued about USDT’s stability, while some of his followers question why CZ is risking his reputation to support Tether:

Alex Kruger, a cryptocurrency trader and analyst, stated that the USDT price fall could be caused by three factors:

Despite the trend of the market stabilization, it remains only to assume whether the Bitcoin price surge on Bitfinex was caused by a massive sale of USDT or more serious factors. Some analysts don’t exclude the speculative origin of Tether's volatility caused by fake messages in various Telegram channels and forums about the possible delisting of USDT by KuCoin and Binance.

Bitfinex resumed accepting fiat deposits and upgraded its security system. The representatives pointed out that “all cryptocurrency and fiat withdrawals are, and have been, processing as usual without the slightest interference.” Nevertheless, some users still feel the fear of losing their funds due to the inappropriate functioning of the exchange’s services and other users’ complaints. According to one of them, Bitfinex tech support specialists attributed delays in processing transactions to the change of a banking partner of their payment processor.

However, any possible changes in banking partners relationships won’t affect security of users’ funds, Bitfinex communications director Kasper Rasmussen  assured. He also added that the exchange is “currently working [its] way through a backlog of fiat withdrawals and a few users unfortunately continue to experience these delays.”

How quickly these problems will be solved is still unclear, but the number of users’ complaints and tickets, which can be tracked here, show that this is not a matter of “a few” accounts. Hopefully, a new banking partner and system upgrades will clear things up.