Untethered: The History of Stablecoin Tether and How It Has Lost Its $1 Peg

Stablecoin Tether has dipped below its 1:1 ratio with the US Dollar after a year of uncertainty regarding its fiat currency reserves.

Tether, a cryptocurrency that has long been a point of contention in the community, has seemingly been uppegged from the US Dollar.

The stablecoin, by virtue of that very description, was linked to the US Dollar at a 1:1 ratio. Simply put, every Tether token that was minted had to be backed by a US Dollar.

Concerns around the validity of Tether’s reserves of fiat currency corresponding to the circulating amount of tokens seem to have taken its toll. On October 15, the cryptocurrency dipped below the $1 mark amid a wave of negative sentiment that has led to an apparent sell-off of Tether tokens.

Another factor that may have influenced the drop in value of Tether was a report at the beginning of the month which stated that both Tether and Bitfinex, the exchange responsible for issuing the tokens, had parted ways with Noble Bank in Puerto Rico.

This was followed by Bitfinex temporarily suspending fiat wire deposits - with no specific reason given for the decision. It could well be that the closure of its Puerto Rican bank account has exacerbated the situation.

Tether is still trading below $1 according to data from CoinMarketCap. 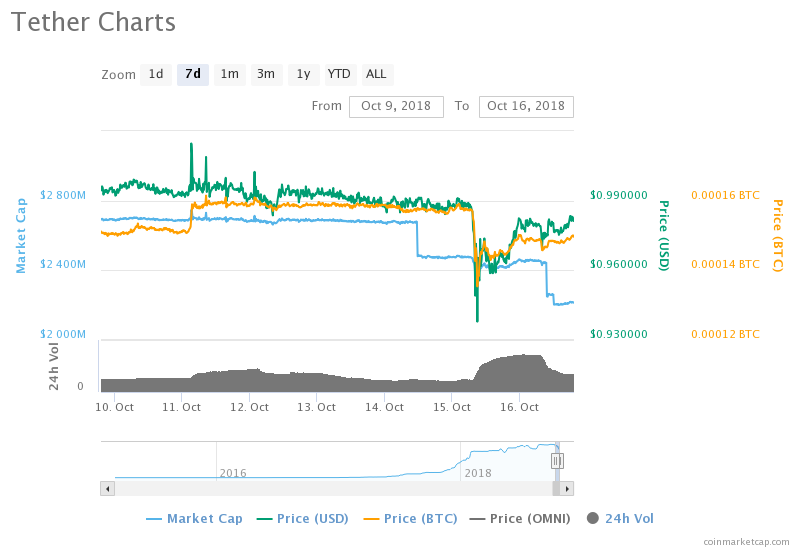 A history of Tether

Tether, as it is known today, was launched in November 2014, after it was rebranded from the original project Realcoin.

The project was initially founded by Bitcoin Foundation director Brock Pierce, alongside software engineer Craig Sellars, and entrepreneur Reeve Collins. The RealCoin startup laid the foundation for Tether’s operation before the name change came about.

The premise of the cryptocurrency was simple, to provide a utility token that represented certain fiat currencies at a 1:1 ratio, with the benefits of cross-border payments facilitated by blockchain technology.

The cryptocurrency was built and operated using an OmniLayer platform, a software layer built on the Bitcoin protocol. Thus, every time new Tether tokens were issued, these could be tracked on the platform, allowing the wider cryptocurrency community to keep tabs on how many new Tethers were released.

Tether has had an interesting association with Hong Kong based exchange platform Bitfinex. The exchange integrated Tether into its operation in January 2015, but the relationship has come under intense scrutiny over the last few years.

According to Tether’s official website, the company shares the same leadership as Bitfinex. JL van der Velde is CEO of both companies, and Giancarlo Devasini is the chief financial operator of both operations as well.

While there is nothing to stop people from buying Bitcoin with fiat currencies or various cryptocurrencies on a multitude of exchanges, the use of Tether to do this has been disconcerting for one major reason.

Since its inception, Tether has asserted that it always has the necessary fiat reserves to back all circulating tokens in the market. The website even provides a real-time ledger of Tether tokens in conjunction with their underlying monetary reserve. 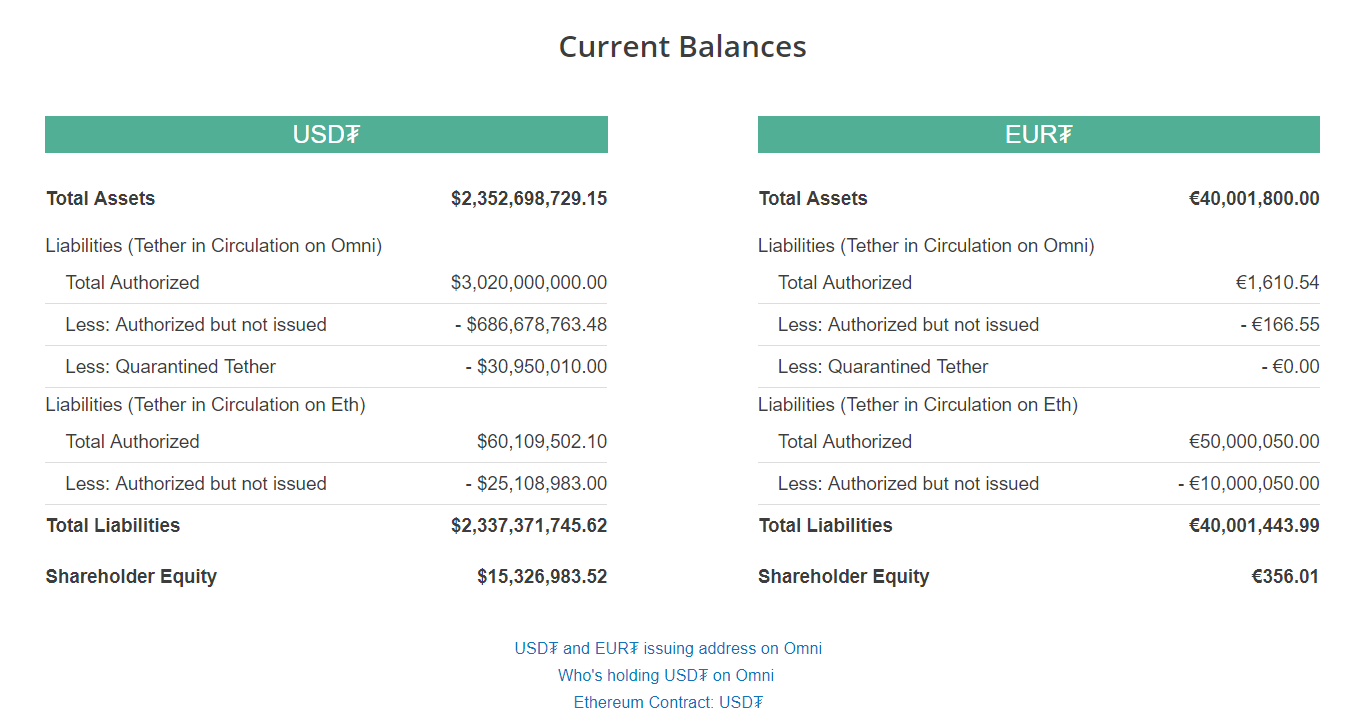 However, there have been claims that not all Tether tokens which are issued, have the necessary fiat currency reserve to back it up.

While Tether’s balance sheet on its website claims to provide a transparent reflection of its accounts, Tether has failed to complete an audit of its accounts by a third-party - which was promised in 2017.

The crypto community began to put pressure on the company to conduct a full audit to allay fears of inadequate cash reserves to the number of Tether tokens. To this end, Tether acquired the services of Friedman LLP to conduct a short review of its account balances.

Following that, the company published a memo of a short report from Friedman LLP with the company’s accounts - in the hopes of appeasing the concerns of various parties online:

“We hope that the community considers the attached memorandum for what it is: a good faith effort on our behalf to provide an interim analysis of our cash position and our issued and outstanding tokens, as part of ongoing efforts to further professionalize the transparency mechanisms of Tether Limited.”

As various critiques came out in public, Bitfinex eventually threatened legal action against parties that were questioning the authenticity of their operation in November 2017.

Both Bitfinex and Tether then received government subpoenas in December 2017 from the Commodity Futures Trading Commission (CFTC) in response to the concerns raised towards the end of the year.

With the pressure firmly on, Tether got Friedman back to conduct a full audit in January 2018. But less than a month into the process, Tether stopped the auditing process, claiming that it wouldn’t be completed in a reasonable period of time, according to Bloomberg:

“Given the excruciatingly detailed procedures Friedman was undertaking for the relatively simple balance sheet of Tether, it became clear that an audit would be unattainable in a reasonable timeframe.”

Following the dissolved relationship between Tether and Friedman LLP, Bitmex released a report that speculated that Tether had the necessary cash reserves in a bank account in Puerto Rico.

While that report may have settled some concerns around the validity of Tether’s claims, a research paper published in June from the University of Texas blamed Tether for Bitcoin price manipulation in 2017.

By using algorithms to analyze market data, the report claimed that purchases with Tether were timed after downturns in the cryptocurrency markets which resulted in price increases in the value of Bitcoin.

In the same month, a law firm in the US released a report stating the Tether did actually have the adequate reserve of fiat currency to back tokens in circulation. Law firm Freeh Sporkin &  Sullivan LLP had access to two of Tether’s bank accounts to release its findings - which were not an official audit.

In response to the report, Tether’s general counsel Stuart Hoegner told Bloomberg that mainstream accounting firms would not conduct official audits on companies working with cryptocurrencies:

“The bottom line is an audit cannot be obtained [...] The big four firms are anathema to that level of risk. We’ve gone for what we think is the next best thing.”

New Tether continues to be minted throughout 2018

Despite all of this media attention, Tether tokens have continued to be issued through the year, according to data from Omni Explorer. 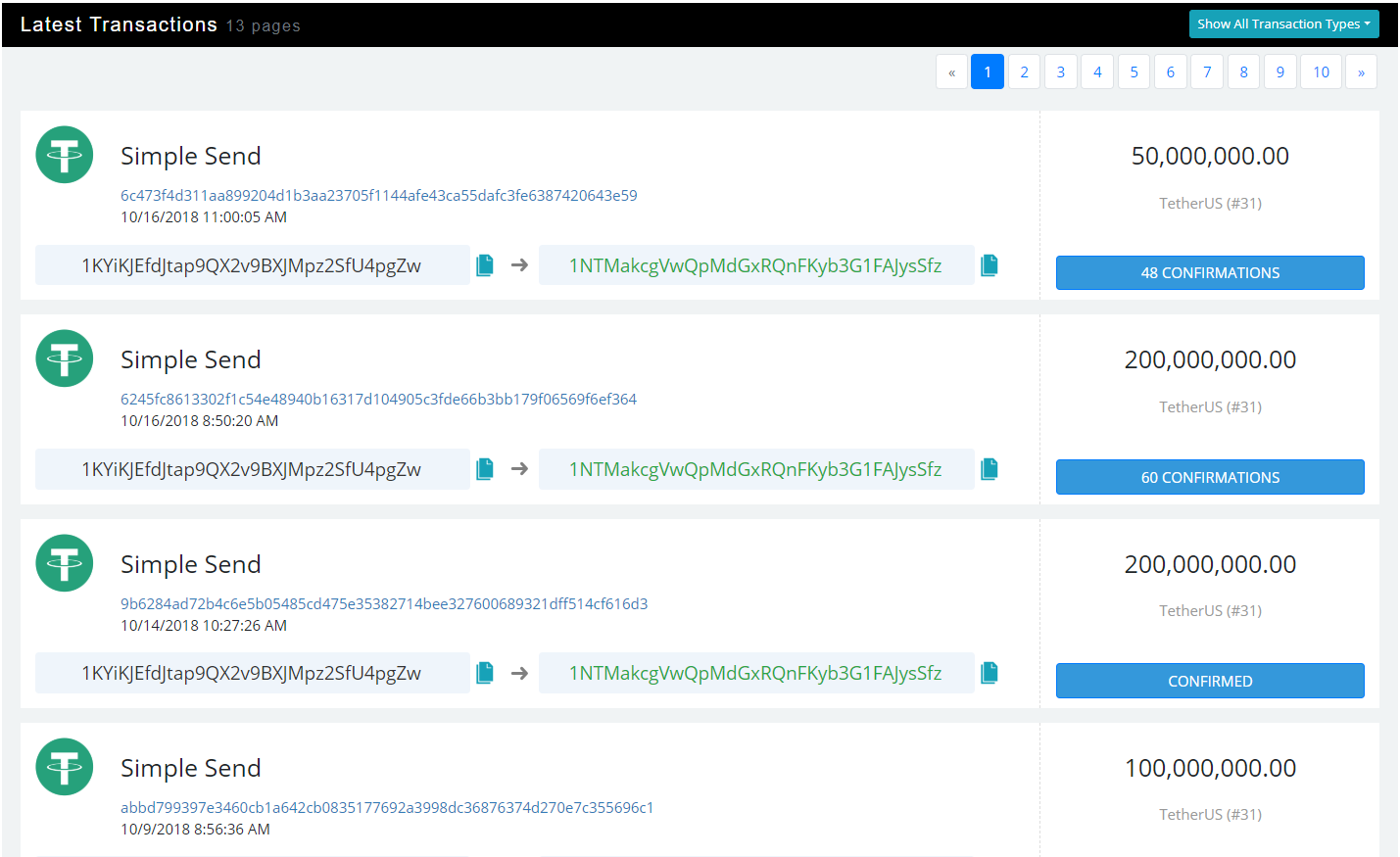 In August, more than $500 million worth of tokens were released, but the focus of many reports was on the apparent lack of effect this had on market prices these issuances were having.

While Tether has long been hailed as the original stablecoin pegged to the US Dollar, its duopoly with TrueUSD, has been disrupted by the approval of two new stablecoins linked to the Dollar.

In September, Paxos and Gemini launched two new stablecoins called the Gemini dollar (GUSD) and the Paxos Standard (PAX), which are both backed by the US dollar on a 1:1 ratio.

Both stablecoins are based on the Ethereum blockchain using ERC-20 token standards, which also ensures full transparency of these coins, as Ethereum can verify the smart contract of both ERC-20 tokens.

This should also rule out the need for third-party service providers and exchanges in order to make transactions with these stablecoins.

An overarching theme of the Tether saga has been the lack of trustworthy transparency when it comes to the necessary reserves of fiat currency to back-up newly minted coins.

To date, Tether has not undertaken or released an official third party audit of its accounts. While the community would love to give them the benefit of the doubt, hundreds of millions of dollars have been spent on Tether tokens and this necessitates a transparent and trustworthy audit.

If the company had carried out this process, at whatever cost and given timeframe, all fears could have been allayed. The failure to do so has led to serious uncertainty, the consequences of which are apparent in the current valuation of Tether tokens.

The launch of new stablecoins by highly reputable service providers has the potential to provide a viable alternative to Tether. The pressure is firmly on the company to prove it is running a transparent operation.