As Cointelegraph reported on Sept. 10, with the approval of the New York Department of Financial Services (NYDFS), Paxos and Gemini officially announced the introduction of two stablecoins called the “Gemini dollar (GUSD)” and the “Paxos Standard (PAX).” Both stablecoins are backed by the U.S. dollar on a 1:1 basis, with every unit of GUSD and PAX representing the value of one U.S. dollar.

Experts believe that the emergence of fully audited, legitimate and licensed stablecoins will have a profound impact on the crypto market, especially in the long-term, as it provides investors a way to retain value without being exposed to the volatility of the market.

Significance of GUSD and PAX deploying on Ethereum

Cameron Winklevoss, the co-founder and president of United States-based regulated cryptocurrency exchange Gemini, said in an official statement that it has launched GUSD on the Ethereum blockchain network utilizing the ERC-20 token standard.

Prior to the launch of GUSD and PAX, only two stablecoins — Tether (USDT) and TrueUSD (TUSD) — existed in the market, both of which have been integrated by major cryptocurrency exchanges like Binance, Bitfinex, OKEx, Huobi and HitBTC.

Tether and TrueUSD deployed USDT and TUSD on the Omni and Ethereum blockchain networks, with TrueUSD relying on the reputable ERC-20 token contract of Ethereum.

Brandon Arvanaghi, the core developer of GUSD, stated that the Gemini dollar is one of the first stablecoin, alongside PAX and TrueUSD, to be deployed on Ethereum as an ERC-20 token, with the entire system being integrated into the smart contracts of Ethereum.

The compatibility of GUSD and PAX with the Ethereum blockchain allows for the transfer of the two stablecoins through the Ethereum network with the existing infrastructure designed for tokens. For instance, the Gemini dollar can be transferred on the Ethereum network through wallets like MetaMask and systems such as MyCrypto and MyEtherWallet, without relying on third-party service providers and exchanges.

For usability and accessibility, it is advantageous to have stablecoins that can be seamlessly sent and received on an infrastructure that the vast majority of cryptocurrency users are already familiar with. The white paper of GUSD reads:

Charles Cascarilla, the co-founder and CEO of Paxos, emphasized that immutability and transparency in the structure of stablecoins is crucial for decentralized accounting. As PAX operates as a token on the Ethereum network, anyone on the Ethereum blockchain can verify and evaluate the smart contract of GUSD and PAX.

"In the current marketplace, the biggest hindrances to digital asset adoption are trust and volatility. As a regulated trust with a 1:1 dollar-collateralized stablecoin, we believe we are offering an asset that improves on the utility of money."

In the early days of Bitcoin, many investors in the cryptocurrency market called for an autonomous economy that operates independently from the broader financial market and government-controlled markets.

As the market started to grow and regulated financial institutions began to take interest in the market, the cryptocurrency market has become more intertwined with the global finance sector.

In terms of value, cryptocurrencies generally make up a practical store of value due to their lack of correlation to the broader financial markets, as Bitwise Asset Management vice president of R&D Matt Hougan explained:

The lack of correlation between cryptocurrencies and the global market has been considered to be one of the strongest points of the asset class that may enable major cryptocurrencies to potentially find competition in the offshore banking market, given the increasing crackdown on overseas savings accounts by governments like China and the ability of cryptocurrencies to hold value in a secure and efficient manner.

But, the integration of global finance into crypto finance through the adoption of fiat currency-backed cryptocurrencies, custodian solutions offered by banks and strict financial regulations will not lead to an increase in correlation of the value between cryptocurrencies and conventional assets.

Rather, it will ease the process for institutional investors to commit to the cryptocurrency market and individual users, like merchants and casual users, to escape extreme volatility in the market to utilize decentralized financial networks.

Erik Voorhees, the CEO of ShapeShift, noted that the integration of global finance into crypto finance is monumental and that it needs to continue for the asset class to survive and eventually compete against reserve currencies and traditional stores of value.

“It's a big deal and an important step. Global finance is becoming further integrated with crypto finance. All that crypto needs in order to win is for this to continue.”

The role of Gemini in the institutionalization of crypto

Throughout 2018, Gemini and the Winklevoss twins have directed their efforts toward institutionalizing the cryptocurrency sector, enabling digital assets to be more favorable toward institutions and large-scale investors.

The Bitcoin exchange-traded fund (ETF) proposal by the Winklevoss twins filed with the U.S. Securities and Exchange Commission (SEC) is well documented. To increase the probability of its approval, Gemini secured various partnerships with regulated financial institutions, including Nasdaq, to better monitor and oversee the cryptocurrency market.

In July, the SEC ultimately rejected the Bitcoin ETF proposal of the Winklevoss twins filed by Bats BZX Exchange, Inc. (BZX), citing issues in its pricing model, saying that it will not allow ETFs to base the value of Bitcoin on a cryptocurrency exchange, which is vulnerable to manipulation:

“Rather, the Commission is disapproving this proposed rule change because [...] BZX has not met its burden under the Exchange Act and the Commission’s Rules of Practice to demonstrate that its proposal is consistent with the requirements of the Exchange Act [...] in particular the requirement that its rules be designed to prevent fraudulent and manipulative acts and practices.”

Still, despite the rejection of the ETF, the partnership between Gemini and Nasdaq stands, and the disapproval of the ETF allowed other companies that have filed Bitcoin ETFs with the SEC to revise their filings accordingly, further increasing chances of approval.

Since April of this year, Gemini has been working closely with Nasdaq to integrate market compliance and surveillance programs to appeal to regulators and to legitimize the cryptocurrency exchange market.

The first step toward the institutionalization of a market is to create trusted custody solutions and appropriately regulate the spot market of the asset class to ensure stability and transparency.

The efforts of Gemini and other financial institutions like ICE — the parent company of the New York Stock Exchange (NYSE) — and Nasdaq to evolve cryptocurrencies into a well-regulated, structured and transparent asset class are expected to have a large impact on the long-term growth of the industry. Tyler Winklevoss, the CEO of Gemini, said:

“Since launch, Gemini has aggressively pursued comprehensive compliance and surveillance programs, which we believe betters our exchange and the cryptocurrency industry as a whole. Our deployment of Nasdaq’s SMARTS Market Surveillance will help ensure that Gemini is a rules-based marketplace for all market participants.”

For nearly four years, since its launch in 2014, Tether has been the dominant force in the cryptocurrency exchange market as the most widely utilized stablecoin.

However, many analysts and investors in the cryptocurrency space have heavily criticized Tether since its inception due to the lack of transparency and clarity on its origin, audit reports and structure.

The controversy around Tether began in 2017, when a set of 13.4 million confidential electronic documents relating to offshore investments called the “Paradise Papers” were released by German reporters Frederik Obermaier and Bastian Obermayer.

The Paradise Papers disclosed a connection between Tether and Bitfinex officials Philip Potter and Giancarlo Devasini, who established Tether Holdings Limited in 2014.

Tether was brought into the cryptocurrency market by the integration of Bitfinex, one of the leading cryptocurrency exchanges in the global market. As the volume of Tether continued to increase and more investors started to rely on USDT to hedge the value of their holdings to U.S. dollars, major exchanges like OKEx, Huobi and Binance adopted USDT as the primary stablecoin.

For many years, investors have publicly expressed their dissatisfaction in the opaque structure of Tether, as it became one of the core components of the cryptocurrency exchange market. Throughout this year, Tether consistently demonstrated a daily trading volume of over $3 billion, which is twice larger than that of Ethereum, the second most valuable cryptocurrency in the world. 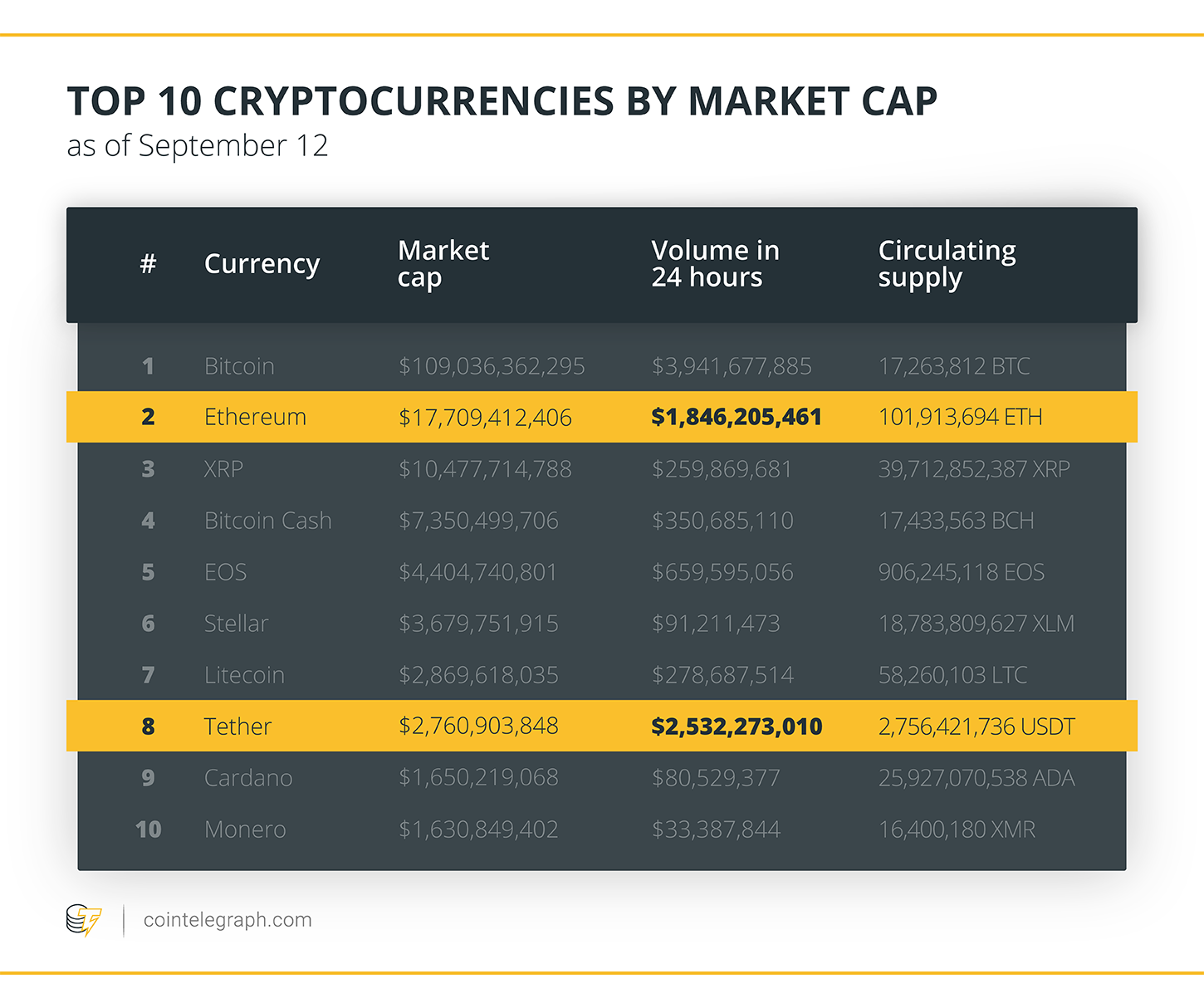 Hence, in a hypothetical situation in which Tether Holdings files for bankruptcy and the stablecoin does not represent several billion dollars — contrary to its balance sheet — then the entire global cryptocurrency market could suffer greatly.

In response to criticisms, Tether Holdings released audit results in June through law firm Freeh Sporkin & Sullivan LLP, demonstrating that it has more than enough funds to cover the billions of dollars its balance sheet portrays. At the time, Tether CEO J.L. van der Velde said:

“Despite speculation, we have consistently stated that Tether is backed by USD reserves at or exceeding the Tethers in circulation at a given moment, and we’re glad to have independent verification of this to answer some of the questions posed by the public.”

However, the fact that the audit result was not published by a widely recognized accounting firm and that Tether canceled the audit from Friedman LLP led the controversy around the stablecoin to intensify.

“The reason given by Tether was certainly not clear and precise, neither acceptable. An audit is to be allowed as much time as required, albeit the audit needs to be concluded before the due date. It is not a reasonable ground, and I've personally not heard of such a reason in my auditing career.”

For over four years, Tether has always been at the center of controversy and has struggled to definitively prove its legitimacy through trusted third-party audits. As such, investors such as Multicoin Capital partner Tushar Jain said that GUSD and PAX can be considered as improvements over Tether:

“This is such a huge improvement over Tether. It reduces systemic risk in the whole crypto ecosystem. Tether is a systemic risk in that, if it explodes, billions of dollars could effectively disappear and cause exchange insolvencies. An alternative to Tether hugely reduces that risk.”

Professor at the University of California is not convinced

In an op-ed published in The Guardian, Barry Eichengreen, professor of economics and political science at the University of California, Berkeley, firmly stated that he believes stablecoins do not solve the stability issue in the cryptocurrency sector.

As an example, Eichengreen offered the dilemma of cryptocurrency-accepting merchants. He stated that merchants are not able to price goods based on Bitcoin, given the extreme volatility rate of the currency. But, stablecoins can be accepted by merchants as a primary currency because their value is backed by fiat currencies.

“Stablecoins purport to solve these problems. Because their value is stable in terms of dollars or their equivalent, they are attractive as units of account and stores of value. They are not mere vehicles for financial speculation. But this doesn’t mean that they are viable.”

Still, regardless of the stability in the value of stablecoins, Eichengreen said that stablecoins are still not viable for various reasons, with the main factor being the vulnerability of the market to tax evaders and criminals.

“This exchange may be attractive to money launderers and tax evaders, but not to others. In other words, it is not obvious that the model will scale, or that governments will let it.”

The approval of GUSD and PAX by NYDFS directly refutes the two arguments of Eichengreen. A distinguished government body — in this case, the state of New York — regulated and licensed the launch of the two stablecoins.

Moreover, due to their compatibility with Ethereum as ERC-20 tokens, GUSD and PAX do not need to depend on an exchange. Even if they did, cryptocurrency exchanges are so heavily regulated in most major markets that it is highly impractical for criminals to attempt to utilize cryptocurrencies to launder money with stablecoins.