Japanese exchange Bitpoint has published the breakdown of crypto assets stolen in the $27.8 million hack of its platform earlier this month.

4509 Total views
156 Total shares
Listen to article
0:00
News
Own this piece of history

Japanese exchange Bitpoint has published the breakdown of crypto assets stolen in the 3 billion yen (~$27.8 million) hack of its platform earlier this month.

A document published by Bitpoint’s parent firm Remix Point Inc. on July 16 reveals that five crypto assets in total were stolen by the attackers. The breakdown provided by the company compares the proportion of stolen customer assets with assets belonging to the firm: 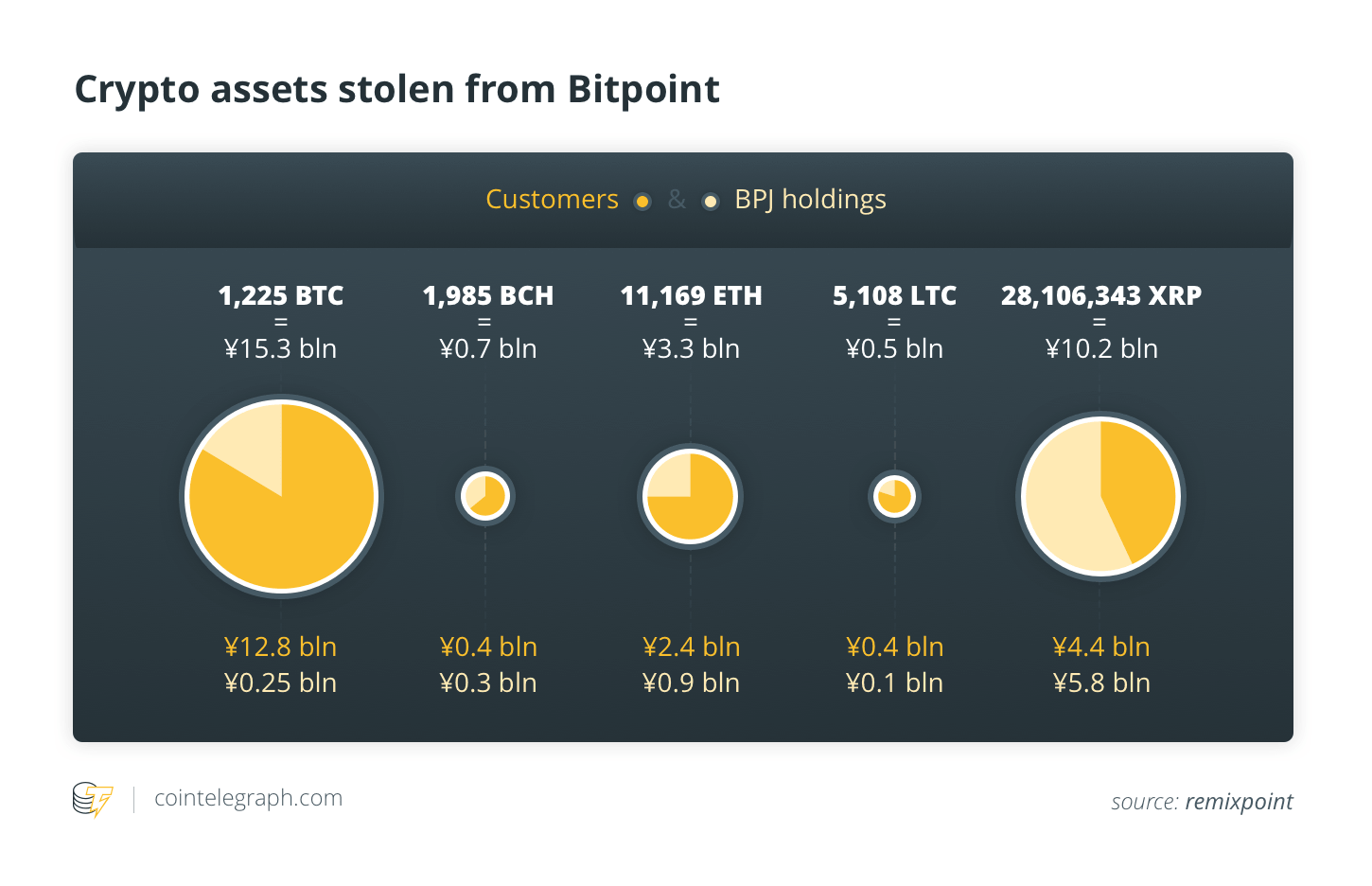 Out of the 3.02 billion yen stolen in cryptocurrencies overall, 2.6 billion yen belonged to customers and 960 million yen were company assets. XRP accounted for the highest share of total losses, with stolen XRP accounting for over 10 billion yen — roughly a third of the lost funds.

Bitpoint has moreover revealed its plans to compensate customers in cryptocurrencies rather than in their equivalent fiat value.

The exchange reiterates its belief that the breach occurred due to unauthorized access to the private keys of its hot wallets, and that it now plans to move all holdings into cold storage.

It confirms that no breach of its cold wallets has been detected, but states that it continues to monitor the situation and is also suspending all services until more comprehensive security measures have been undertaken and the firm has completed its tracking of the stolen funds.

The document reveals that Bitpoint is cooperating with the Japan Virtual Currency Exchange Association (JVCEA) — a self-regulatory crypto exchange association that formed in March 2018 to help establish industry-wide investor protection standards — and has requested that the association monitor any suspected ill-gotten funds and wallets potentially associated with the incident. The exchange is also reportedly in close communication with the Ripple Foundation.

As reported yesterday, Bitpoint discovered over 250 million yen ($2.3 million) in crypto that was stolen during the hack, bringing the total sum of lost funds down to its initial estimate of 3.5 billion yen ($32 million) to 3.02 billion yen ($28 million).