Bitcoin may not return to $10,000 soon, WHO launches blockchain platform to fight COVID-19, and more bad news for QuadrigaCX victims.

Bitcoin remained largely steady in the mid-$6,000s for most of this week but failed to punch through levels above $6,900. Analysts, such as Cointelegraph’s Michaël van de Poppe, have warned BTC isn’t in any bullish market right now, even as global stock markets show signs of a slight recovery. According to Glassnode, Bitcoin holders appear to be withdrawing their funds — with exchange balances at their lowest level in about eight months. On Wednesday, a “death cross” emerged that suggests BTC will struggle to return to five figures before May. Even though BTC might end up trading sideways between $6,000 and $8,000 for some time yet, a poll of “VIP” Kraken users suggests most traders think the world’s biggest cryptocurrency will hit all-time highs before 2021. The survey found that the average BTC price target for this year is $22,866.

Ethereum Co-Founder Vitalik Buterin has described the lack of easy movement between the Ethereum and Bitcoin networks as “embarrassing” — and is calling for a decentralized exchange to act as a trustless bridge between the two networks. The programmer also revealed that he has held talks with Electric Coin Company CEO Zooko Wilcox-O’Hearn about creating a DEX bridge from ETH to the privacy coin Zcash. A lack of liquidity has stymied the progress of decentralized exchanges to date, but a dedicated BTC–ETH bridge supported by Buterin could enjoy greater levels of uptake.

Could blockchain technology help slow the spread of the coronavirus? The World Health Organization hopes so. It is partnering with major blockchain and tech companies to launch a DLT-based platform that enables data to be shared more easily. Known as MiPasa, it’s hoped the network will achieve the “early detection of COVID-19 carriers and infection hotspots.” Built on top of Hyperledger Fabric in conjunction with the likes of IBM, Oracle and Microsoft, it aims to facilitate “fully private information sharing between individuals, state authorities and health institutions.” In other developments this week, Ripple Labs announced it is donating $200,000 to two non-profits fighting to contain the spread of coronavirus in the U.S.

Battle for the digital dollar in America’s coronavirus stimulus bill

This week, the biggest financial stimulus package in the United States’s history was signed into law by President Donald Trump. Worth $2 trillion, it’s hoped the drastic measures will help firms and consumers weather the impact of the coronavirus crisis. The U.S. has now overtaken China and Italy in the highest number of confirmed COVID-19 cases worldwide. One draft version of the bill included the requirement to develop a digital dollar, meaning all those entitled to financial aid would receive it in a free bank account. Alas, all mention of digital dollars was later erased from a later iteration of the legislation. Under the measures approved by Trump, every American who earns less than $75,000 a year will receive a direct payment of $1,200 — with $500 for every child.

The seemingly never-ending saga of QuadrigaCX has taken another turn. Canada’s Revenue Agency has requested 750,000 documents on the exchange’s 115,000 customers — many of whom lost money when the company collapsed. EY, the court-appointed bankruptcy trustee, is going to hand over a database containing personal user information, account balances and transaction histories between 2016 and 2018. A committee of affected users has given its approval because launching a dispute would be expensive and time-consuming. Not everyone is happy with the decision. Committee member Magdalena Grownowska described the demand as “an unprecedented affront to individual privacy,” and cautioned the Canadian taxman may have other motives. 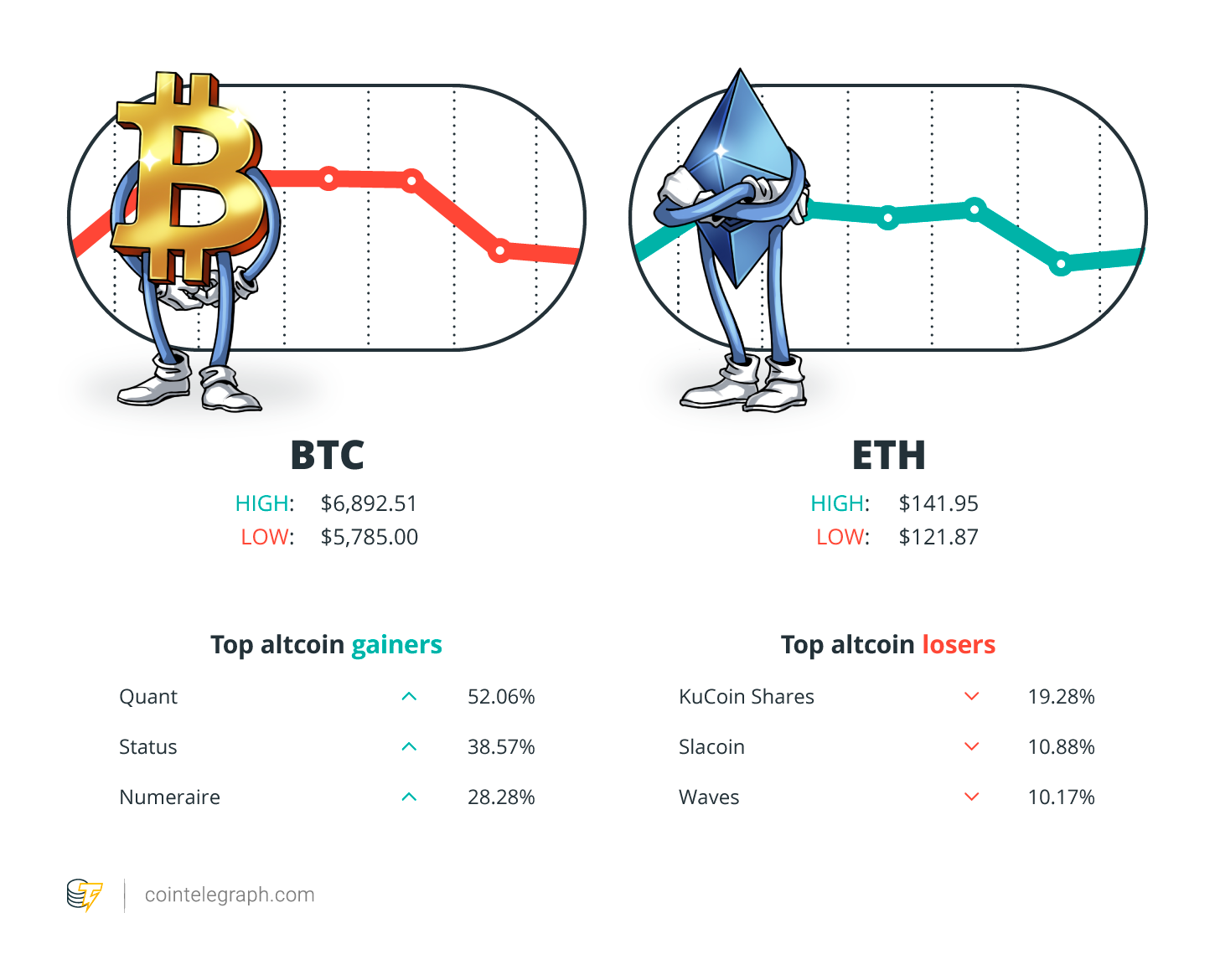 “Bitcoin was born in a financial crisis. It will come of age in this one.”

“I only have bullish scenarios for Bitcoin. Yes, I would say 6,800 is a key level that has played out before…I would say overall, I mean, we're looking at a very wide range for Bitcoin, something between $3,100 and $20,000.”

“Going above $6,800 would maybe give me 85% confidence we’re not going to go below this — and we’re almost there, we’ve almost broken it; we’re sitting at resistance.” 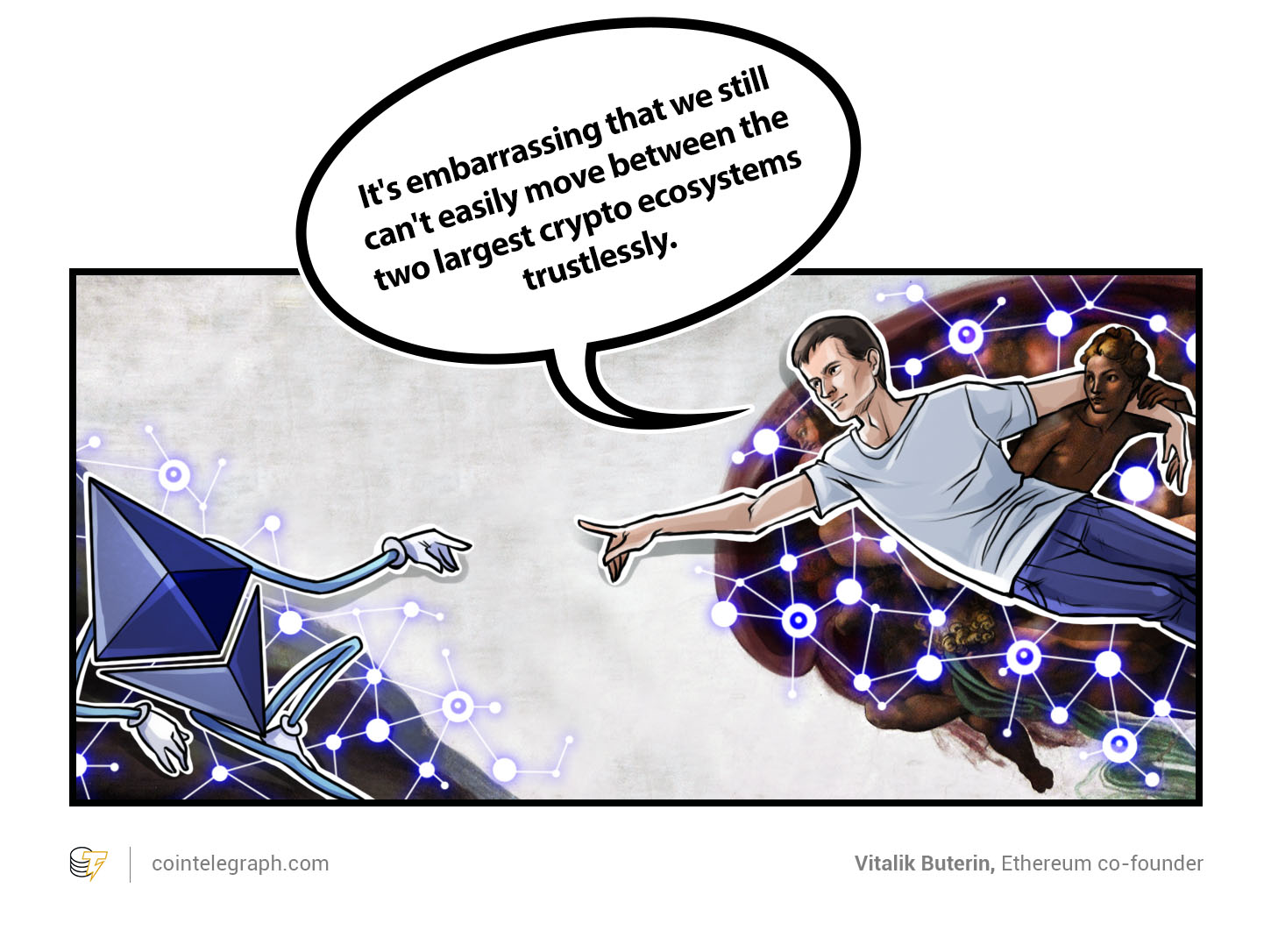 “It's embarrassing that we still can't easily move between the two largest crypto ecosystems trustlessly.” 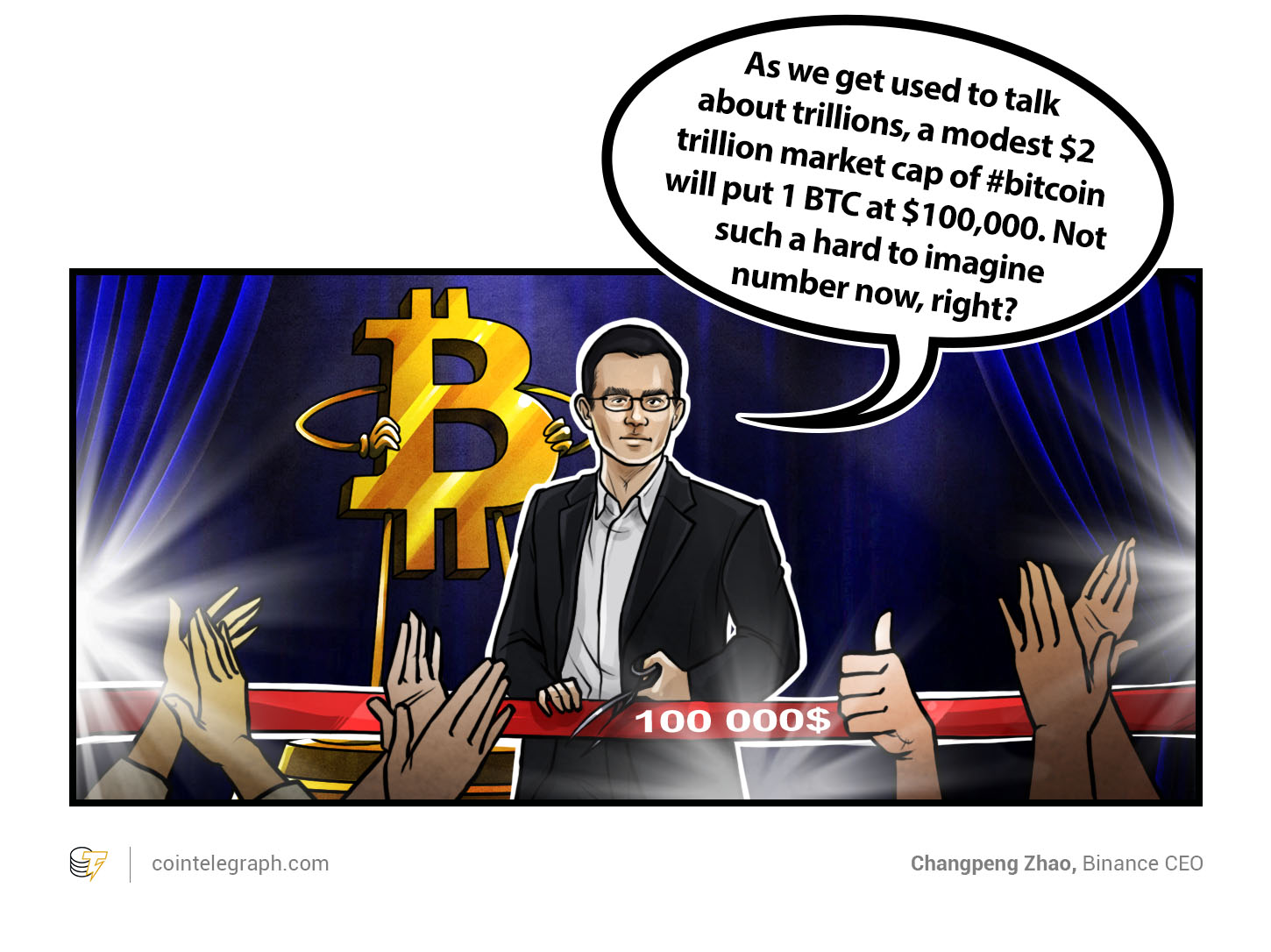 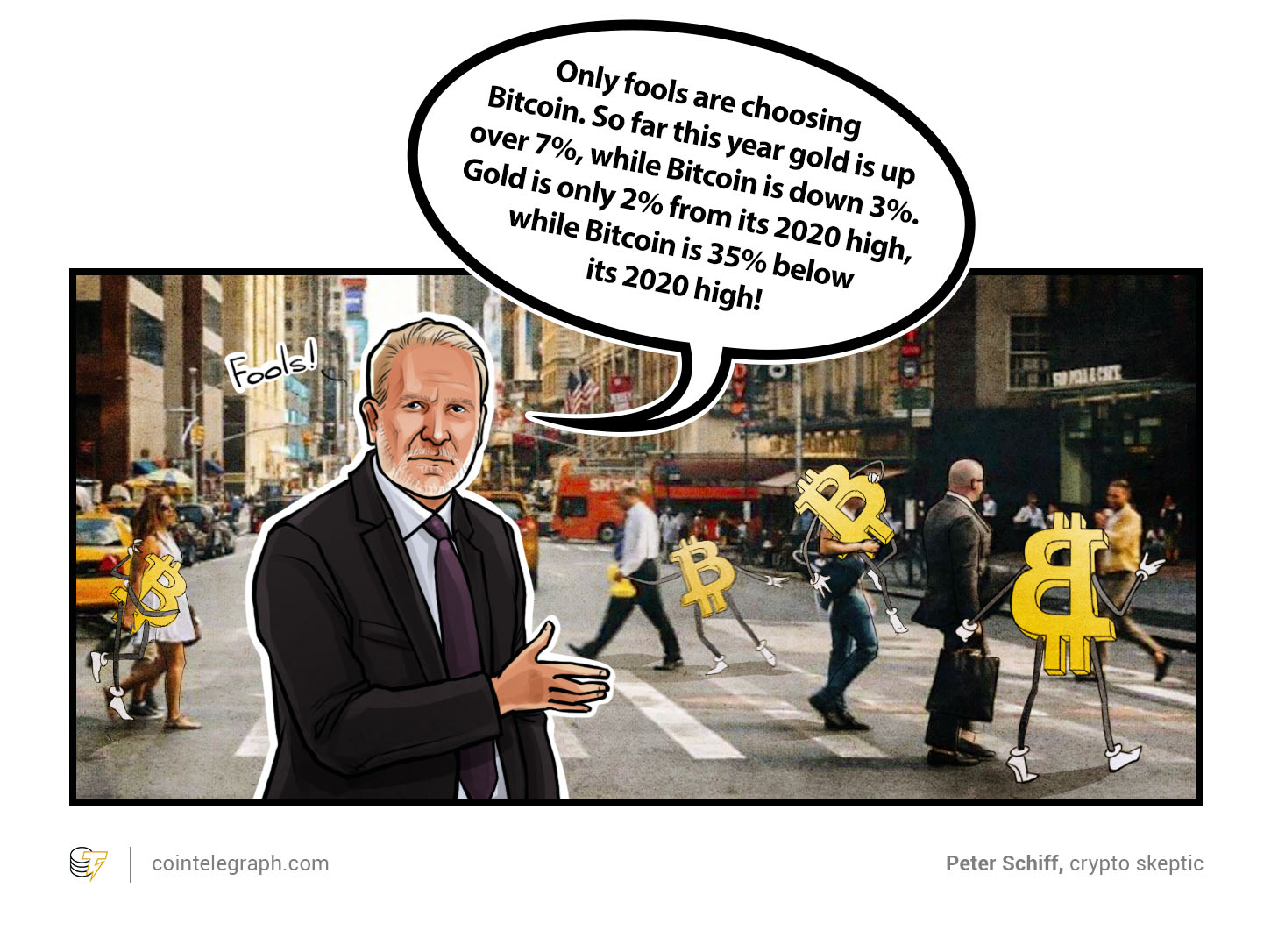 “$BTC will continue to be volatile over the next few months but the macro backdrop is WHY it was created. This will be and needs to be BTC’s year.”

Many were shocked at the scale of the U.S. stimulus package in light of the coronavirus. The Federal Reserve has started churning out fiat money to prevent a deeper financial crash — and has even suggested it could print an infinite amount of cash. Binance CEO Changpeng Zhao has predicted that this could be good news for Bitcoin. He tweeted that a BTC price of $100,000 is “not such a hard to imagine number now,” adding that this would achieve a “modest” market capitalization of $2 trillion. As modest as such a projection may be, it’s some way off BTC’s current market cap of $112.3 billion — and the industry’s overall valuation of $173 billion.

BitBay was offline for more than 18 hours this week — disruption blamed on a “network problem” with an “external service provider.” The company claims to be the third-largest cryptocurrency exchange in Europe, with more than 800,000 users. Alarm bells quickly started ringing as the outage rumbled on, with the exchange resorting to a Facebook live stream to calm users. It stressed that “all fiat and crypto funds are safe” and asked for a “little more trust” as work continued to bring the platform back online. Some users suggested that the so-called “network problem” was a cover story for a much bigger issue. Trading has now resumed.

The billionaire ex-husband of Janet Jackson has demanded that Facebook reveals who was behind ads on the platform that used his image to promote a Bitcoin scam. Wissam Al Mana alleges that a cryptocurrency firm called “Bitcoin Trader” used his name to promote itself in the Middle East. Facebook has deleted the offending ads, but Al Mana fears fraudsters could publish similar ads in the future. His lawyers now want the social media giant to unmask the ad’s publishers — and share their names, addresses, contact details and payment methods. Crypto scams have increasingly been injecting stardust into their campaigns to achieve false legitimacy. Kate Winslet, Bill Gates, Elon Musk and Richard Branson have all had their identities recently appropriated by swindlers.

Gavin Newsom has warned the public to be vigilant against Bitcoin fraudsters during the coronavirus pandemic — namedropping the cryptocurrency in a speech about “extraordinarily bad people, who do extraordinarily bad things.” The California governor has warned there are criminals who are using the health crisis to their advantage. He’s not alone. The U.S. Commodity Futures Trading Commission has warned scammers are likely to use the coronavirus to add credibility to their scams or manipulate emotions. Some online perpetrators have even been impersonating the World Health Organization in an attempt to steal cryptocurrency donations intended to fight the pandemic.

The world’s largest technology companies have made concerted efforts to investigate and integrate blockchain technologies over the past few years. Gareth Jenkinson has more.

Global crypto community comes out in full force against coronavirus

Many prominent members of the blockchain and crypto industries have heeded the global cry for help and have swiftly engaged in meaningful action. Shiraz Jagati looks at what’s being done.

No tax for you: Why crypto traders and miners might head to Portugal

Is Portugal willing to provide a friendly foundation for digital assets to grow? António Madeira finds out.