The Japanese government’s attempts to halt crypto gambling can only last so long, industry experts say.

Despite Japan’s reputation for being one of the most welcoming nations for fintech, online crypto gambling has struggled to take off in light of the country’s strict regulation. In late March, the blockchain-based, decentralized application (DApp) platform Tron announced that it would block gambling DApps in Japan, bringing the issue of regulating crypto gambling back to public attention. Cointelegraph takes a look at the legal and cultural approaches to gambling in Japan, along with how developers believe attempts to halt crypto gambling can only last so long.

On March 31, Tron announced in a press release that it would remove gambling DApps in Japan in order to comply with local regulation.

The press release laid bare the firm’s intention to comply with local laws and regulation worldwide. With special mention of Japan, the company said that it does not “encourage or recommend any gambling DApps regarding the Japanese market.” Additionally, Tron suggested that Japanese developers should not attempt to develop any gambling DApps on its platform and for developers to actively block users that are found to have Japanese IP addresses.

Gambling is generally prohibited by the Japanese criminal code, aside from a few regulated, government-approved sectors — such as horse, boat, bicycle and automobile racing.

The company also stated its readiness to work with Japanese law enforcement in the event that any Tron DApps are found to have violated Japanese laws or regulations.

The question of Tron’s commitment to decentralization reared its head once again on May 10, as Lucien Chen, former chief technical officer and co-founder of the company, announced his decision to leave the project, citing excessive centralization among his reasons. Although the former CTO noted his pride in a now-deleted Medium post what the project had achieved so far, Chen said that the project is no longer true to its original mission of decentralizing the web:

“The reason for leaving is very simple. As a technical man, I feel very sad that the TRON has departed from the faith of ‘decentralize the web.’”

Along with stating his belief that real internet applications cannot currently function in the Tron network, Chen also highlighted his concerns with Tron’s delegated proof-of-stake (DPoS), as well as Super Representative governance and block production nodes:

“The DPOS mechanism of Tron is pseudo-decentralized. The top 27 SR nodes (block nodes) have more than 170 million TRX votes, and most of them are controlled by Tron. It’s hard for other latecomers to become block nodes, so they cannot participate in the process of block production.”

Chen will now focus on the launch of his own decentralized blockchain project — dubbed Volume Network — designed to adhere to his ideological principles concerning blockchain and mining practices.

Existing hurdles for blockchain and crypto in Japan

Japan is famously one of the most bullish countries worldwide with regard to both crypto and blockchain, with cryptocurrencies legally considered a means of payment. While the country has a relatively open approach to crypto, some issues do still remain that could possibly hold back more widespread adoption, concerning both gambling and payments.

The first is that Japan has a long-established love affair with cash. According to Nikkei research, roughly 65% of transactions are still carried out via cash, a rate almost double that of other economically developed nations. 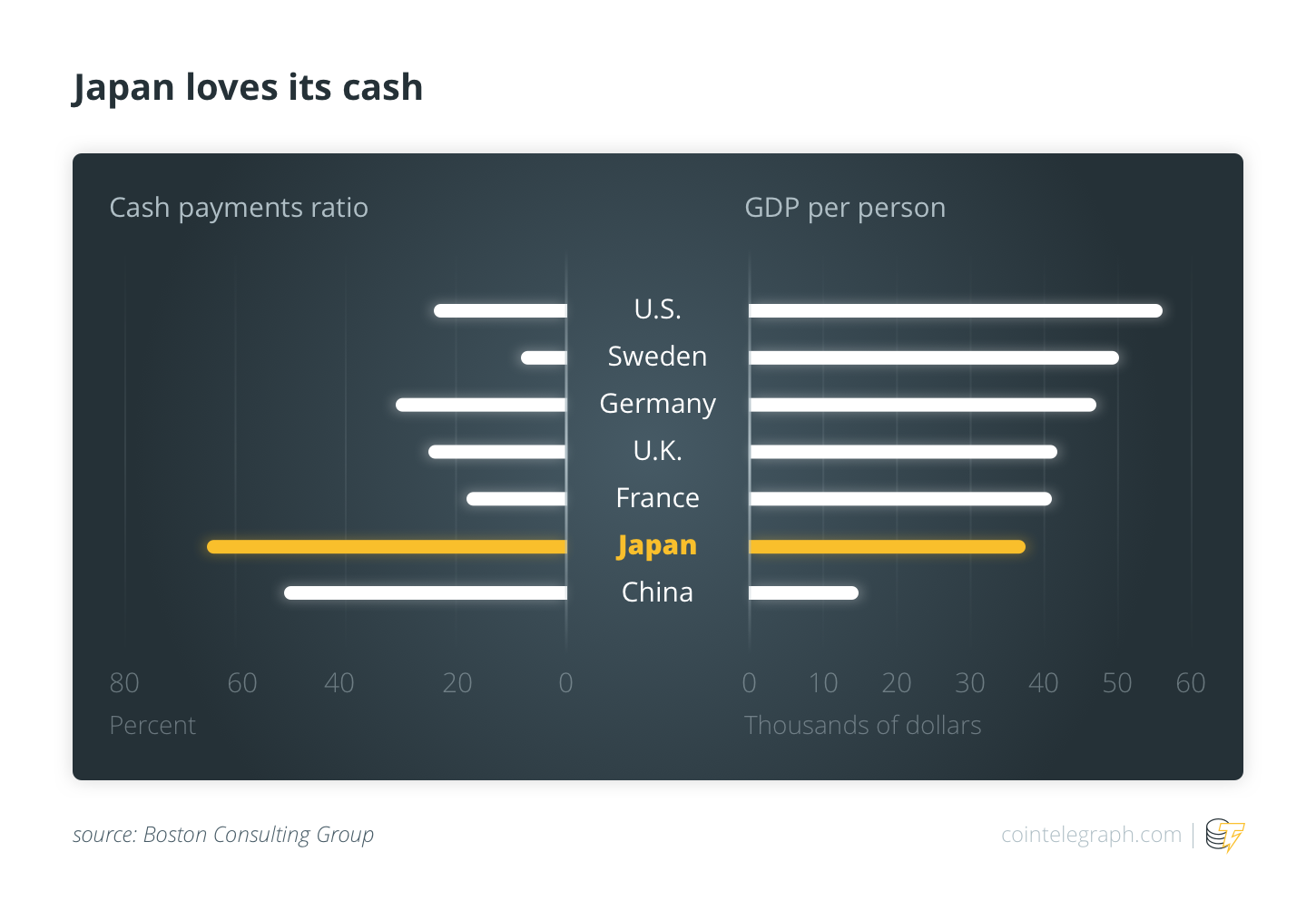 Another impediment to progress is the high rate of taxation currently imposed on cryptocurrencies in the country. According to research by Cointelegraph Japan, income gained from trading cryptocurrencies currently stands at a tax rate of 55%, although there are attempts underway to lobby the government to lower this to 20%. Profits from crypto trading are currently classified as “miscellaneous income” in Japan, meaning that traders pay between 15% and 55% capital gains tax on top of their annual tax return. The highest bracket of tax generally applies to high earners, or those earning more than 40 million yen ($365,000) per year.

Gambling, cultural attitudes and the law in Japan

In July 2018, Japanese lawmakers passed a controversial bill legalizing gambling resorts after a legal struggle spanning nearly two decades. The new legislation divided politicians and citizens alike, with a Nikkei poll indicating that 53% of the population did not support the bill.

Japan has an increasingly complex relationship with gambling. While the available gambling outlets enjoy a steady stream of customers, the industry is strictly regulated, and revenue is largely used in order to increase the revenues of the government. Despite the illegality of nonregulated gambling, hugely popular slot machines — known as “pachinko” — are being installed in shops across the country and operate in an increasingly prominent legal grey area. 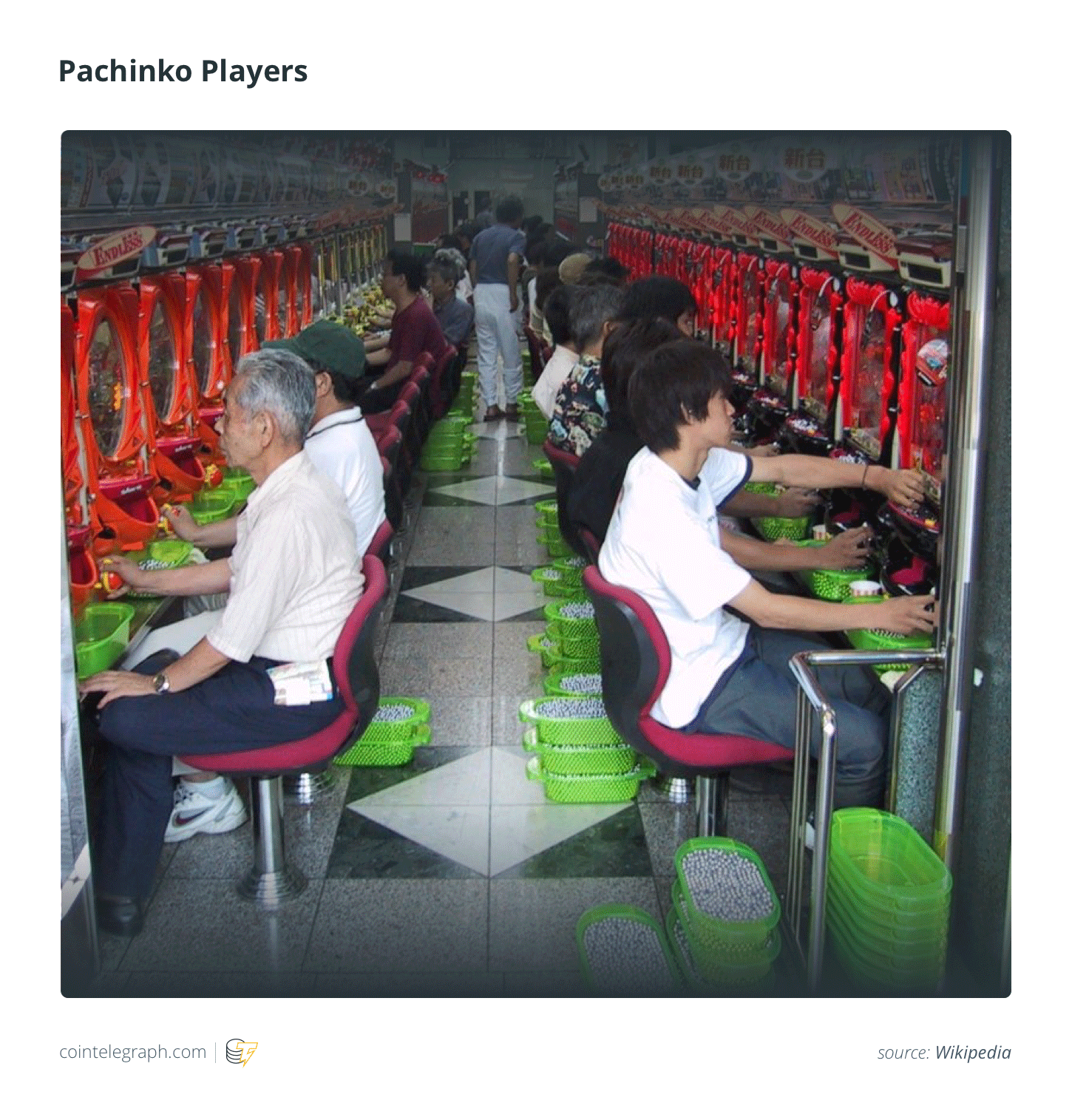 Satoshi Ashibe, operator of the online sports betting service Jukebucks.com, gave his private view about the many faces of gambling in Japan and attempts to regulate it:

“The former Horse Racing Law came into force in 1923, and horse racing was legalized. And after the Pacific War, Keirin, boat racing and auto racing 3 races were approved as legalized gambling in order to use the profit for economic reconstruction. Gambling officially licenced in Japan is the only of these four games.

“There are pachinko shops and slot machine shops in rural towns with a population of few thousands, but these games are not gambling ‘legally.’ The police are responsible for the game, and many former police officials work as executives at industry groups. The pachinko industry is the police's right-of-interest industry, for which ‘illegal’ games are silently accepted.”

While it is clear that, in the eyes of the government, only a select few sports are available to be bet upon, other sports enjoy an illegal, underground following:

Throughout the decades-long attempt to allow the development of casinos and other gambling institutions in Japan, critics have been keen to highlight the need for anti-addiction measures. Methods include an infrastructure consisting of gamblers, families and doctors to monitor addiction, and the installation of facial recognition software to restrict addicts’ ability to access facilities in gambling establishments.

The spread of gambling addiction as exposure to the industry grows has also had an effect on families. Ray Nault, an academic at Beacon College in Leesberg, Florida, whose career spent working with numerous Japanese universities and the Ministry of Industry and Technology spans several decades, explained that gambling still remains a taboo:

“As with most social ills, the gambling issue is largely masked by taboo. The taboo is related to the familial and social contagion that arises when there is an ‘ill’ member. Families do not speak of gambling addictions, since this is a burden that is to be carried alone, and neighbors and, for example, employers, would never be cognizant of an individual who is caught in the throes of gambling. This means that the family will not actively seek help. In an odd mirroring of this, the relevant department at City Hall also will not ‘advertise’ or openly acknowledge that such help is available in the form of counselling, for example.

“This means that there is also a municipal shielding that occurs, where a family member would have to go in and directly inquire about help. There is the added pressure of loan sharks, who feed on gambling debt, which further isolates the particular families who have someone who gambles excessively. The cultural attitude towards gambling is that it is the fault of the weak individual, and that the consequences are just punishment for such weakness.”

However prevalent the actuality of gambling in Japan may seem, support for the industry is by no means universal. Hesitancy and outright criticism of the industry is present in both the government and public opinion. In light of Tron’s statement of compliance, it appears that the Japanese government is determined to keep a firm grip over legal methods of gambling within its borders. However, it is important to note that, as technology develops and decentralization processes become more widespread, how exactly governments aim to regulate something designed to be free from the constraints of any one government or central authority remains to be seen.

What’s next for crypto gambling in Japan?

Despite the apparent attempts from the government to show a tough stance toward gambling and a desire to develop the industry on its own terms, innovators within the industry still remain cautiously optimistic that both crypto and blockchain gambling are compatible with the new era. European football and American sports such as the NBA now have a dedicated following in Japan. Both sports have a significant betting culture attached to them and this, in turn, has spread to Japan, with most gamblers using online betting services. As Ashibe explained, users face issues common to all international transactions in fiat currencies — i.e., remittances, regulation and commissions:

“The biggest problem when Japanese people play with overseas online gambling companies is the complicatedness of payment and withdrawal. Remittances by banks are strictly regulated, and withdrawals using payment services such as ecopayz are cumbersome.”

Ashibe also explained how he views cryptocurrency as the most obvious way of bridging the gap between international demand and a seamless service:

“I think gambling and blockchain/cryptocurrency are very compatible. Cryptocurrency is the best way to solve these deposit and withdrawal problems and financial regulations. Certainly, buying a cryptocurrency is very troublesome at the moment. You can open an account on the exchange, deposit money from a bank, place an order on the chart, and finally get BTC or ETH, or turn them into Japanese yen. There is also the problem of very high tax rates. However, in the next few years, legal development will progress, and there will be a way to easily exchange Japanese yen for a cryptocurrency without going through such a procedure.”

According to Ashibe, one government officer expressed his personal view to him that it was only a matter of time before online sports betting would be legalized in the country, considering it “essential to export sports content such as soccer and basketball in Japan to global content that can be enjoyed by people overseas.” This statement appears to be in line with the government’s “Japan Revitalization Strategy 2016,” which aims to boost the sports industry’s market size from 5.5 trillion yen (roughly $50 billion) up to 15 trillion yen (nearly $137 billion) in 2025.

Although it appears that the government is prepared to crack down on illegal gambling that takes place physically within the country’s borders, Ashibe said that the attempts to effectively regulate and prevent online, decentralized gambling are much less effective:

“Although Japanese law prohibits the operation of online casinos, it is not expressly prohibited that citizens play in online casinos based overseas. To be precise, no player has been arrested. There have been cases in which illegal casino or sports betting customers managed by Yakuza have been arrested. There are still few Japanese players betting on online gaming, which means that they have been silently accepted.

“Regulations on online gaming are different in each country, but online gaming industry will grow around the world by taking those restrictions one step ahead. That growth can only be achieved with the Internet and cryptocurrency. However, the online gaming industry is quietly growing outside the Japanese FSA and police regulations. I believe it is a matter of time to grow to a market size that regulators can not ignore. I do not know what kind of reaction the Japanese regulatory authorities will show when that happens.”

In light of the growing global demand for sports betting without the restrictions and costs that come with the current fiat-based infrastructure, the prospects for crypto gambling and decentralized applications could be positive using the opportunities given by the Internet and cryptocurrency.