The exchanges removed include Bithumb, the world’s second largest exchange in terms of trading volume, along with Coinone and Korbit.

CoinMarketCap, which uses data from multiple major global exchanges to produce averaged prices for cryptocurrencies, tweeted Monday about their decision to remove the exchanges, saying that it was due to “the extreme divergence in prices from the rest of the world and limited arbitrage opportunity.”

This morning we excluded some Korean exchanges in price calculations due to the extreme divergence in prices from the rest of the world and limited arbitrage opportunity. We are working on better tools to provide users with the averages that are most relevant to them.

CoinMarketCap’s decision was followed by a dramatic reverse in Ripple’s record-breaking uptrend. The day CoinMarketCap removed the South Korean exchanges, Ripple saw an immediate loss of over $20 bln in market capitalization, and an almost 30 percent price drop Jan. 8. The altcoin was overtaken by Ethereum (ETH) as the second largest cryptocurrency by market cap.

Ripple in particular is traded on South Korean exchanges at very high volumes, a fact which reportedly helped bring Ripple to second place on the crypto market just last week.

Prices on South Korean exchanges are also over a dollar higher than on most other exchanges globally, which is part of what prompted CoinMarketCap to exclude them.

Rumors that Coinbase would add the altcoin, followed by confirmation on Jan. 4 that it would not, caused a peak and drop in Ripple’s price in the first few days of January. However the price drop after CoinMarketCap’s Jan. 8 decision had a more immediate and drastic effect, with an over 16 percent drop in the space of 6 minutes. 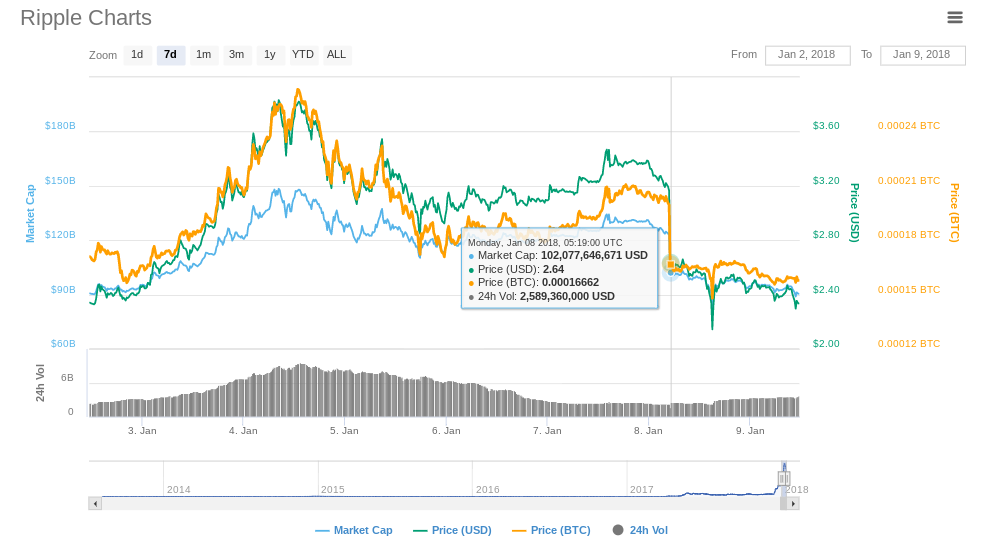 As a result of the move, XRP is currently trailing by some $0.60 on CoinMarketCap versus similar services such as Live Coin Watch, which still includes the major Korean exchanges.

Users on Twitter complained that CoinMarketCap’s failure to promptly alert users about their decision caused panic selling that in turn aggravated the market drop.

Coinmarketcap's decision to exclude Korean prices from the displayed XRP price made the price appear to drop, likely triggering some panic selling. Look closely at the data and don't be mislead.

On Jan. 7 local media in South Korea reported that authorities will inspect six of the country’s major banks to probe for money laundering via cryptocurrency.