Microsoft is bolstering its blockchain offerings on the Azure platform through a series of partnerships, Insolar the latest to join.

6044 Total views
173 Total shares
Listen to article
0:00
Analysis
Own this piece of history

Thanks to the high computational flexibility that it offers, the influence of cloud computing on the blockchain space continues to grow. It's less of a surprise, then, that cloud computing giants — such as Amazon, Microsoft, Oracle and Google's parent company Alphabet — are leading the charge to merge blockchain, especially the enterprise type, and the cloud.

Microsoft in particular has been actively engaging with blockchain startups that are developing blockchain solutions for the enterprise market, working with them to deploy their solutions on the Microsoft Azure cloud infrastructure.

The company's aggressive approach to bolstering the blockchain functionalities of Azure could be a move to take the lead in the blockchain cloud market, which should expand as the underlying blockchain industry continues to grow. Microsoft Azure is currently behind the cloud market leader, Amazon Web Services, by a wide margin. Amazon owns nearly half of the public cloud infrastructure market, while Microsoft only controlled about 15.5% in 2018. 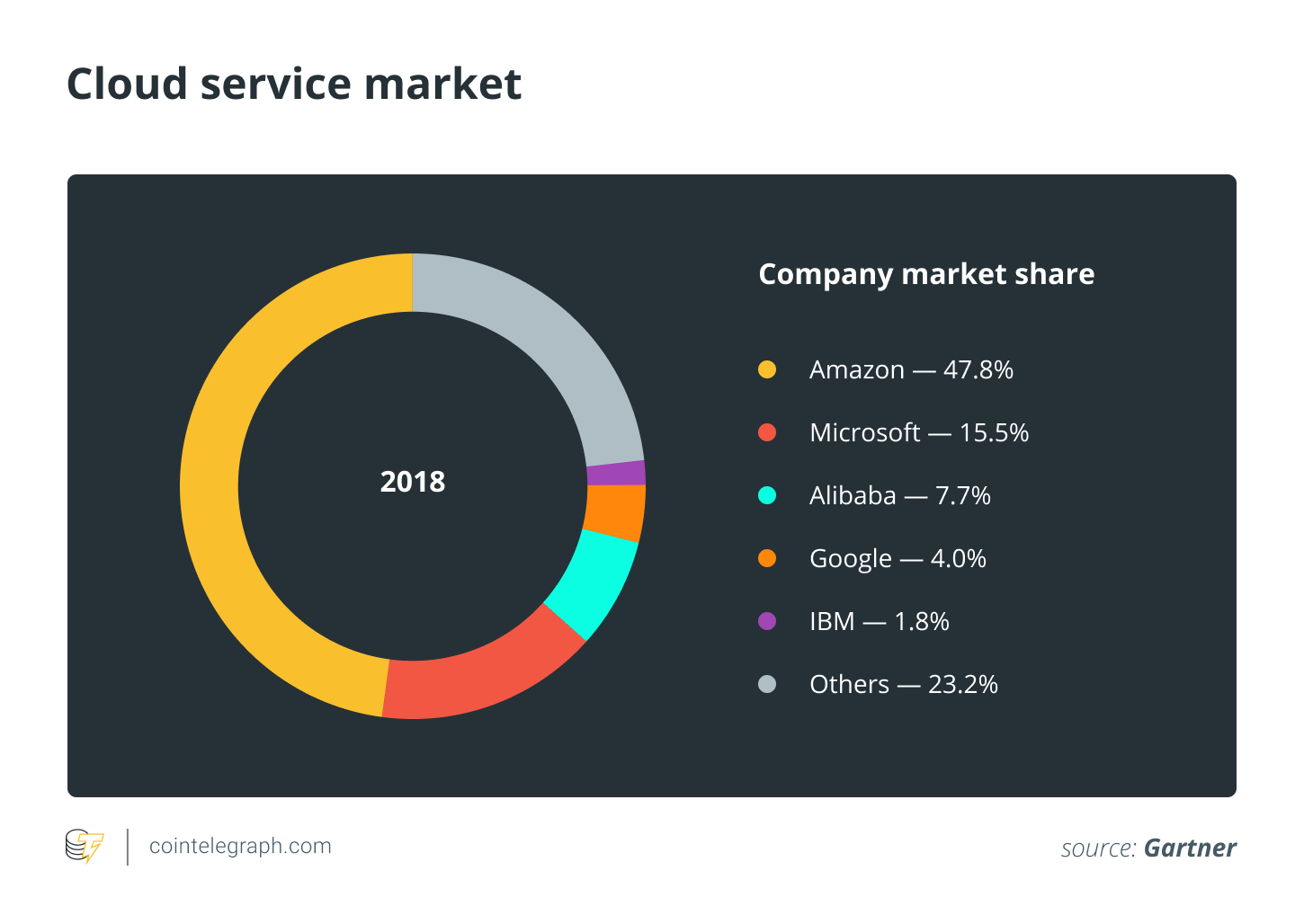 Microsoft recently agreed to collaborate with Insolar, a Switzerland-based startup that builds blockchain solutions for the enterprise market, to bring an additional option to Azure clients that are looking to deploy blockchain applications. Through the partnership, Insolar will be offering enterprise solutions on its own blockchain, called the Insolar Blockchain platform.

Insolar also got accepted to offer its blockchain solutions on the cloud service of database software giant Oracle. Speaking to Cointelegraph via email on the partnership with Microsoft and how it allows enterprises to build products, Insolar co-founder Peter Fedchenkov said:

Insolar's blockchain platform, whose mainnet is expected to launch on Nov. 1, is reportedly capable of executing 10,000 transactions per second.

By offering its Scalable Permissioned Blockchain on Azure, Kadena allows companies to build proof of concept products without delving too deep into the blockchain itself. Despite the promises that blockchain holds, the limited real-world proof that it actually solves certain problems can be limiting when companies think about the cost of building one from scratch. Kadena is also building a public blockchain called Chainweb, which is based on the proof-of-work consensus mechanism.

Enterprises typically opt to use a cloud provider that has an ecosystem for a range of services that work hand-in-hand. Kadena's head of marketing, Tony Pham, told Cointelegraph that offering Kadena's blockchain solutions on Azure means that businesses can easily implement its blockchain alongside other enterprise systems. Pham said:

“One specific example is that Kadena is ready for production smart contracts. An area where Kadena seeks integration is Know Your Customer (KYC). Onfido, a provider of KYC, is also on Azure so an enterprise user could choose to combine Onfido’s and Kadena’s solutions.”

Kadena says its smart contract dubbed Pact is the first human-readable smart contract language that anyone can write. Kadena announced last May that it has partnered with commodities and alternative assets management firm USCF Investments, which has approximately $3 billion in assets under management.

Ethereum-based second-layer blockchain scaling platform, Nahmii, also partnered with Microsoft in September 2019 to offer its solutions on the Azure cloud. Nahmii, created by Singapore-based Hubii, claims to solve the problem of scalability on the Ethereum blockchain "moving transactions away from the main chain to a second network that sits on top of the main Ethereum chain."

This potentially opens up the Ethereum blockchain, which presently executes only 15 transactions per second, to a new world of commercial possibilities. As part of the partnership with Microsoft, Nahmii also joined the Enterprise Ethereum Alliance. The alliance is a coalition of enterprises with the aim of developing standards for building enterprise-grade applications on the Ethereum blockchain.

"Our partnership with Microsoft is unique from the point of view that nahmii is unique; it is the only commercially ready scaling and interoperability protocol in the blockchain industry today. That alone implies that nahmii can be used — at scale — by Microsoft corporate customers to build any solution on the blockchain (payments, loyalty points, etc).”

As part of the partnership, Microsoft will allocate business development resources to onboard clients to the Nahmii network, according to Toll-Messia. Nahmii has already added the Norwegian Block Exchange to its governing body.

In June, Microsoft announced that it has partnered with Truffle, one of the earliest projects at Ethereum incubation lab ConsenSys. Truffle's tools offer developers a standalone, local node for writing smart contracts and a development environment that allows for the deployment of smart contracts. Azure users gain access to Truffle's tools through the partnership with Microsoft.

Truffle didn't respond to a request for comments. However, CEO Tim Coulter previously told Forbes that the partnership "opens up all of those developers to Truffle and it opens Truffle up to all of the services that Microsoft provides."

In the early days of the internet, when only deep-pocketed institutions could afford to own their servers, it wasn’t simple to own a website. These days, this can be set up within minutes. Such is the influence that simplified hosting services have had on internet adoption.

The expansion of blockchain-as-a-service (BaaS) platforms like Azure and AWS could be just as important to the rapid adoption of blockchain. Like web hosting, BaaS platforms take away hurdles like high capital investment and technical skills, and allows companies to simply build and deploy the products they need.