Crypto Vs. Cash: Which Countries Expect to Go Digital Soon?

Why do countries forego large cash transactions and what role will cryptocurrencies play in this transformation.

The Liberal Party of Australia recently proposed a draft bill clarifying that purchases of over 10,000 Australian dollars (around $6,750) in cash would not be legal. According to the government, this step will dissuade tax evasion and encourage a transition to a cashless society.

According to the document, transactions equal to or exceeding the stated amount should be carried out using an electronic payment system or by checks. Those payments also must be reported by an entity under Anti-Money Laundering (AML) and counter-terrorism legislation.

In this case, cryptocurrencies are considered as “payments that the entity must report in accordance with the law on combating money laundering and combating terrorism.” As is widely known, most large cryptocurrency exchanges comply with the government's requirements for Know Your Customer (KYC) and AML.

As the Australian Ministry of Finance noted, the bill was released for public comment, and the government plans to introduce a limit on cash payments starting Jan. 1, 2020. Australians can express their opinions before Aug. 12, 2019.

This step, of course, sounded like good news for the cryptocurrency market, as a cashless society will encourage companies and individuals to turn to digital assets. Here are three more countries that are close to abandoning cash payments and potentially accepting cryptocurrencies as a payment method. 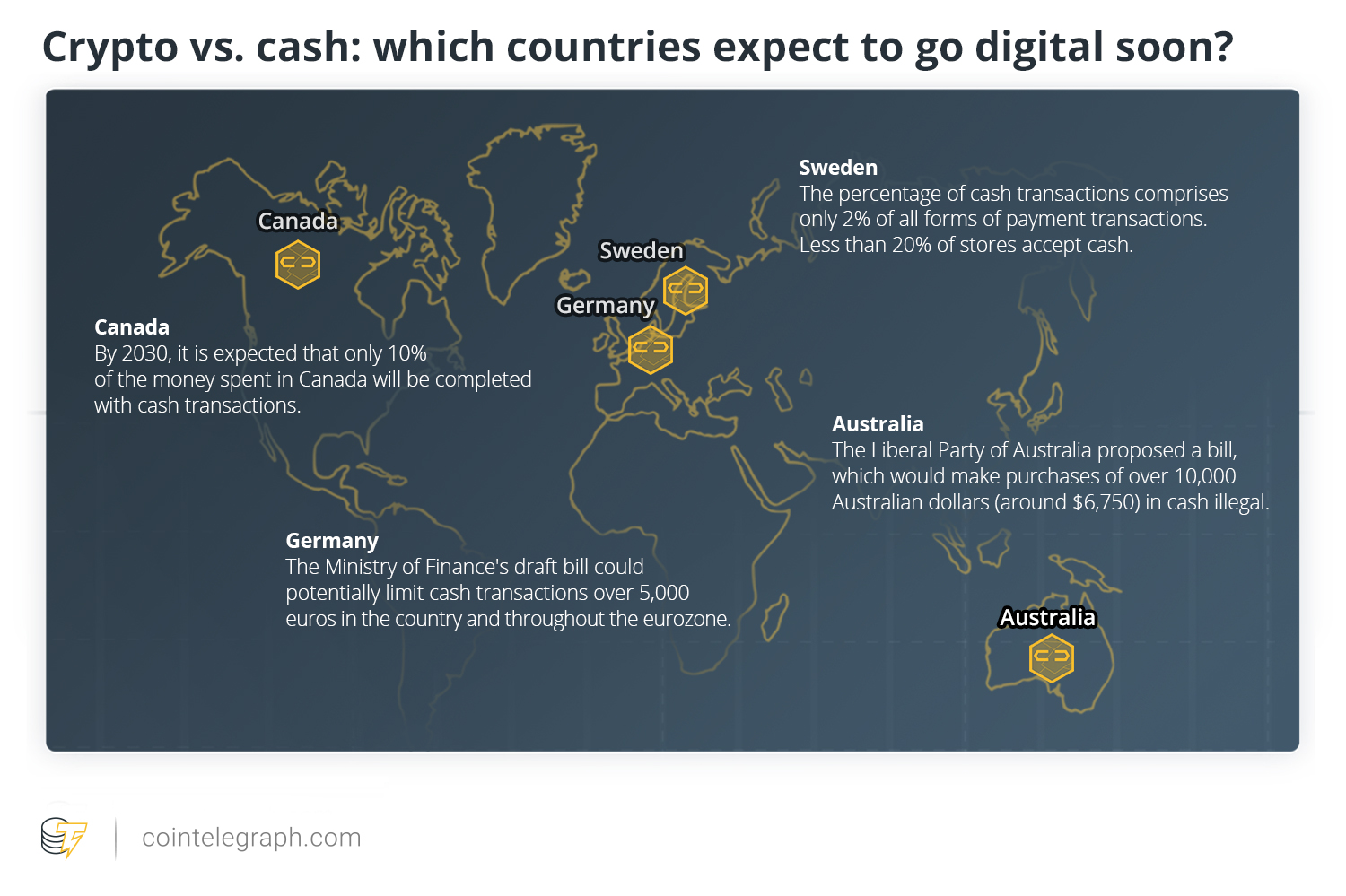 Sweden is one of the most striking examples of a cashless economy. The percentage of cash used in this country has fallen significantly (comprising only 2% of transactions) and less than 20% of stores accept cash. By 2023, researchers propose the country will become an entirely cashless society. This is three times less than in other European countries. The threat of robberies of banks, public transport drivers and retail outlets has virtually disappeared.

This became possible thanks to the efforts of the authorities, the unprecedented high level of public confidence in banking structures and now the promotion of the national Swedish mobile payment system, which is used by more than half of the population.

Overall, Sweden became the first European country with an independent payment service provider (PSP) — i.e., its own acquiring system. Previously, a company named Point offered services such as researching customers, distributing POS-terminals and executing contracts. Subsequently, Point was acquired by VeriFone, an American company manufacturing cashless payment equipment, which decided to enter the European market. At the moment, the company serves 475,000 retail outlets, and 42 acquiring banks from different countries in Scandinavia and Europe work with it.

It seems that Sweden wants to rid the country's infrastructure and tourist facilities of cash. However, the decline in cash usage has been driven by the decisions of citizens to use less cash. Cash is not accepted for public transport because dealing in it is less convenient and less secure for the drivers. In addition, Sweden's small business have completely switched to cashless payments. Stores are actively introducing PayPass, point-of-sale terminals and technologies that enable local startups — for example, iZettle is a card reader for securely accepting bank cards via smartphones. It was obvious that the desire for a cashless society led to the November 2018 intentions by the central bank of Sweden, Riksbank, when it announced the test launch of the first Swedish cryptocurrency called e-krona.

The Bank of Sweden has not yet decided whether the test launch of e-krona will be for a short- or long-term period. However, during the test, the bank’s specialists will decide how to best use the electronic korna in order to provide the masses with access to payment means guaranteed by the state.

Senior economist at Sveriges Riksbank and associate professor at Uppsala University Gabriel Söderberg is very careful about using current cryptocurrencies as a payment tool but thinks that the Swedish government might decide to issue its own digital currency in the future. Söderberg said:

“In my definition of cryptocurrencies one of their hallmarks is that they are not issued by a government, or union of government (such as the EU). In that respect I do not think that governments now or in the future will consider promoting cryptocurrencies as a major form of payment instrument. If we, however, talk about digital currency in a broader sense, I think it is highly possible that governments in the future will create digital form of money that can be used for payments.”

But Söderberg is sure that blockchain as a technology itself can be useful in various applications:

“I think that blockchain technology is very promising, and that there will be many different forms of applications for it in society. I think, however, that the case for it will not be universal, i.e. it will work better in some areas than in others. At the moment, many of us are looking into how blockchain could help with future payments. I am definitely open to the possibility that it could potentially be integrated in some forms in the future payment systems, but we do not know yet to what extent.”

Germany has long been an outlier of European Union, with the nation currently having no restrictions on the use of cash payments. However, at the beginning of February 2016, the Ministry of Finance proposed to limit payment transactions with cash to the amount of 5,000 euros ($5,600) — both in the country and throughout the eurozone. It is noteworthy that the Ministry of Finance reviewed and decided to support the initiative in less than a day.

Whether the German government will accept this restriction is not yet clear, especially when considering how negatively the German society reacted to the initiative. However, it is clear that a serious revision of the position cash occupies has already begun in Germany and in Europe as a whole. In this case, cryptocurrencies fit in with the new paradigm.

After all, the German Ministry of Finance signed a decree in February 2018 legally recognizing Bitcoin as a currency. As noted in the resolution of the Ministry of Finance, cryptocurrencies are equivalent to other legal means of payment, as they are used by transaction participants as an alternative contractual and immediate payment method.

The document also determined that purchases made with cryptocurrency are not taxable. The decree cites the 2015 European Court ruling, which determined Bitcoin as a currency in terms of taxation and abolished value added tax when purchasing goods and services using cryptocurrencies.

The decision of the European Court of Justice allows for differences of opinion between the EU states regarding the nature and regulation of cryptocurrencies. Each country can have its own opinion on what Bitcoin is (e.g., a currency or a property).

Canada demonstrates a sophisticated level of development in its payment system due to the high level of financial accessibility and a government program aimed at optimizing the national payment system. In Canada, there is already only one national debit card system represented by Interac and three major credit card networks operated by Visa, MasterCard and American Express. It is expected that by 2030, only 10% of the money spent in Canada will be completed with cash transactions.

At the same time, the Canadian authorities are not in a hurry to go to fully cashless payments too quickly. In October 2018, the Bank of Canada described a number of issues associated with the country's complete refusal of cash in the study “Is a Cashless Society Problematic?” For example, some people, such as the elderly, may still prefer to use physical money instead of electronic payments.

But the government sees more advantages going forth. The Bank of Canada claims that although a cashless society as a whole will not cause significant systemic problems, there are clear concerns about maintaining operational reliability.

In July 2018, the Bank of Canada conducted a study called “Central Bank Digital Currency and Monetary Policy,” which showed that cryptocurrency issued by the central bank will potentially benefit the country's economic well-being. The research paper states that the introduction of a central bank digital currency (CBDC) “could lead to a 0.64% increase in consumption for Canada compared to their respective cash-only economies."

Related: CBDCs of the World: The Benefits and Drawbacks of National Cryptos, According to Different Jurisdictions

Even earlier, in May 2018, the Bank of Canada, TMX Group and Payments Canada confirmed during their research that any asset and currency can be tokenized and instantly converted. According to the results of the “Jasper project,” the flagship distributed ledger technology experiment launched in June 2017, it was shown that distributed ledgers are an effective solution for automating real-time settlement of securities.

Over six months, the bank developed a system at the RBC Technology Center in Toronto, deploying software developed by the open-source, cross-industry blockchain development consortium Hyperledger that was founded in 2015. This technology was integrated into the bank's existing systems as a “shadow” for the Royal Bank of Canada’s general ledger, allowing the bank to track payments in real time between the U.S. and Canada.

It’s not uncommon now for many to simply leave their physical wallet at home and rely only on a card or their mobile device to call a taxi, order coffee or buy groceries in a store. A society without cash is no longer a utopian dream. Blockchain technology can give a serious boost to the transition to this new lifestyle.

Today, almost everyone understands the direction in which the payment systems of the future will develop, and it is definitely not toward cash or physical assets — cash will become electronic, but what role will blockchain and cryptocurrencies play? And whether it can prove its speed and complete security, we’ll have to wait to find out.