On Aug. 19, the standoff between Bitcoin Cash (BCH) and Bitcoin (BTC) took a new twist, as one of the industry’s most controversial Twitter accounts — with nearly a million followers — changed its views overnight.

The account in question, @Bitcoin, has had a history of promoting Bitcoin Cash. Arguably the crypto industry’s biggest turnaround, @Bitcoin not only deleted old tweets about BCH but also changed links on its profile from Bitcoin.com (a pro-BCH site) to Bitcoin.org (a pro-BTC site). 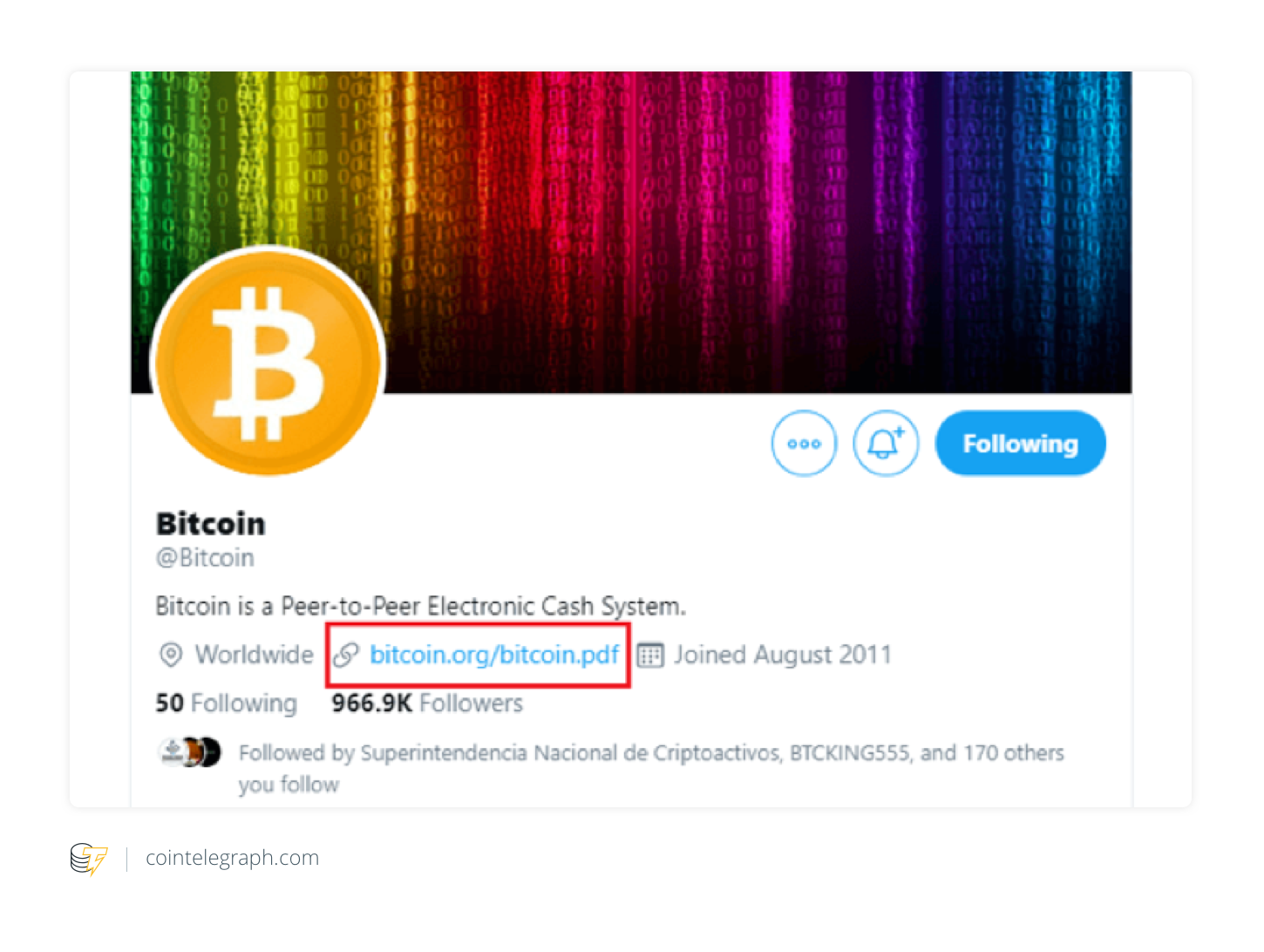 To date, it is not clear who owns the @Bitcoin Twitter account. However, for many years, the account has been used to promote BCH. Most onlookers have assumed that Roger Ver, a prominent BCH supporter, was involved with the account or at least knew the identity of its operator.

However, he denied involvement with the account in April of 2018, claiming that the account’s owner “supports BCH, is well known in the Bitcoin ecosystem, but doesn’t want to deal with incessant trolling so he has chosen not to make his identity public.”

Speculations about the matter

Hundreds of pro-BCH posts on @Bitcoin’s account were promptly deleted without notice on Monday, Aug. 19. However, a post promoting BCH as an electronic cash system still stands. In the thread, @Bitcoin even went as far as defending BCH in a tweet that reads:

“Bitcoin Cash is not BTC, but it works much better than BTC does.”

The @Bitcoin account has been involved in controversy in the past. Bitcoin supporters have criticized the account for its false advertising and misleading information that pushed people to believe that BCH is the true BTC.

After @Bitcoin switched from supporting BCH, multiple commentators — including those on Reddit’s r/Bitcoin subreddit — supplied theories to explain what was happening with the account. A Reddit user asked Roger Ver whether anything can be done to save the account, who replied with simply, “Don’t know.”

Ver’s carefree response to the matter has led many onlookers to come up with various speculative theories about what is happening with the account. Even Litecoin’s creator, Charlie Lee, has chimed in on the action with a tongue-in-cheek tweet that reads:

“I have no proof of this, but I think the owner of the @Bitcoin must have had a romantic relationship with Roger Ver and recently broke up with roger. That’s the only thing that can explain why @Bitcoin stopped supporting BCH.”

In an Interview with Cointelegraph (a full version of which will appear soon on the Youtube channel), Roger Ver debunked that idea by saying:

“The previous owner of the @Bitcoin twitter handle is not even a female.”

Ver then went on to say that the original owner of the Twitter handle is no longer in control of it and is upset at what is happening as he is a BCH supporter. He added:

“I don’t know who owns or has control of the @Bitcoin twitter handle now but it is not the original guy from 2009 who likes Bitcoin Cash.”

Therefore, the question outlined by a tweet from the account named Autonomous Bitcoin AI #2357 remains unanswered. It reads:

“Roger claimed in the past that he knows the current owner of the handle. So, he either must know what happened with the account or there was a fallout between them. Yet he doesn’t reveal any information and lets his employees run rampant on r/BTC with conspiracy theories instead."

A Twitter user with the handle @BashCo responded to the event by saying, “Maybe @Bitcoin went all-in on Bcash on Roger and Craig’s advice, and is now broke and angry.“

Moreover, a tweet by a user by the name of BTC Sessions revealed that the new owner requested the Bitcoin community to unblock the account as it is now under new ownership. Some users believe that the account has been sold more than once before and that the owners are “just trying to make the account more valuable.”

What this has to do with the newly appointed Bitcoin.com CEO

With close to 1 million followers, there is no denying that the @Bitcoin Twitter account is worth fighting for considering its expansive online real estate. The truth about the account, however, seems to revolve around Bitcoin.com’s newly appointed CEO.

On Aug. 2, Stefan Rust replaced Roger Ver as the new Bitcoin.com CEO. Ver will take on the position of executive chairman. However, his role in the company has yet to be disclosed. Some conspiratorial responses are inclined toward the idea that Rust is purging previous BCH tweets in preparation to launch a high-profile platform or to avoid legal trouble.

Another explanation for what may be happening was presented to Cointelegraph by Gregory Klumov, CEO of Stasis, the company behind a euro-backed stablecoin.

"It was an orchestrated marketing initiative by BCH stakeholders to raise awareness of BCH’s existence and ‘superiority’ over BTC.”

The controversy currently surrounding the @Bitcoin Twitter account is clear evidence of the continuing conflict between BTC and BCH supporters. In what seems to be a divide between the two tribes, they have vastly different visions for Bitcoin and its future.

It all began with the scalability crisis that emerged as Bitcoin’s network grew larger in 2017. As the media, Wall Street and the government started to focus on Bitcoin, concerns about the network’s block capacity came to the fore.

Another proposed solution would involve a Segregated Witness (SegWit) approach that would separate transactional data from actual transactions, thus speeding up the confirmation process without necessarily increasing the block size.

Although the Bitcoin concept is highly malleable, and different groups can extract different meanings from how the technology is supposed to run, hard forks can be risky for any cryptocurrency. In any case, hard forks lead to a drop in hash rate, rendering the network less secure.

While the 2017 hard fork only had a small impact on the Bitcoin network, a subsequent hard fork of BCH between Bitcoin Cash ABC and Bitcoin Cash SV in November 2018 revealed just how lethal a hard fork can be. The conflict between the two Bitcoin Cash factions resulted in a battle for a hash rate that weakened Bitcoin Cash’s network security and also led to a drop in price for BCH. 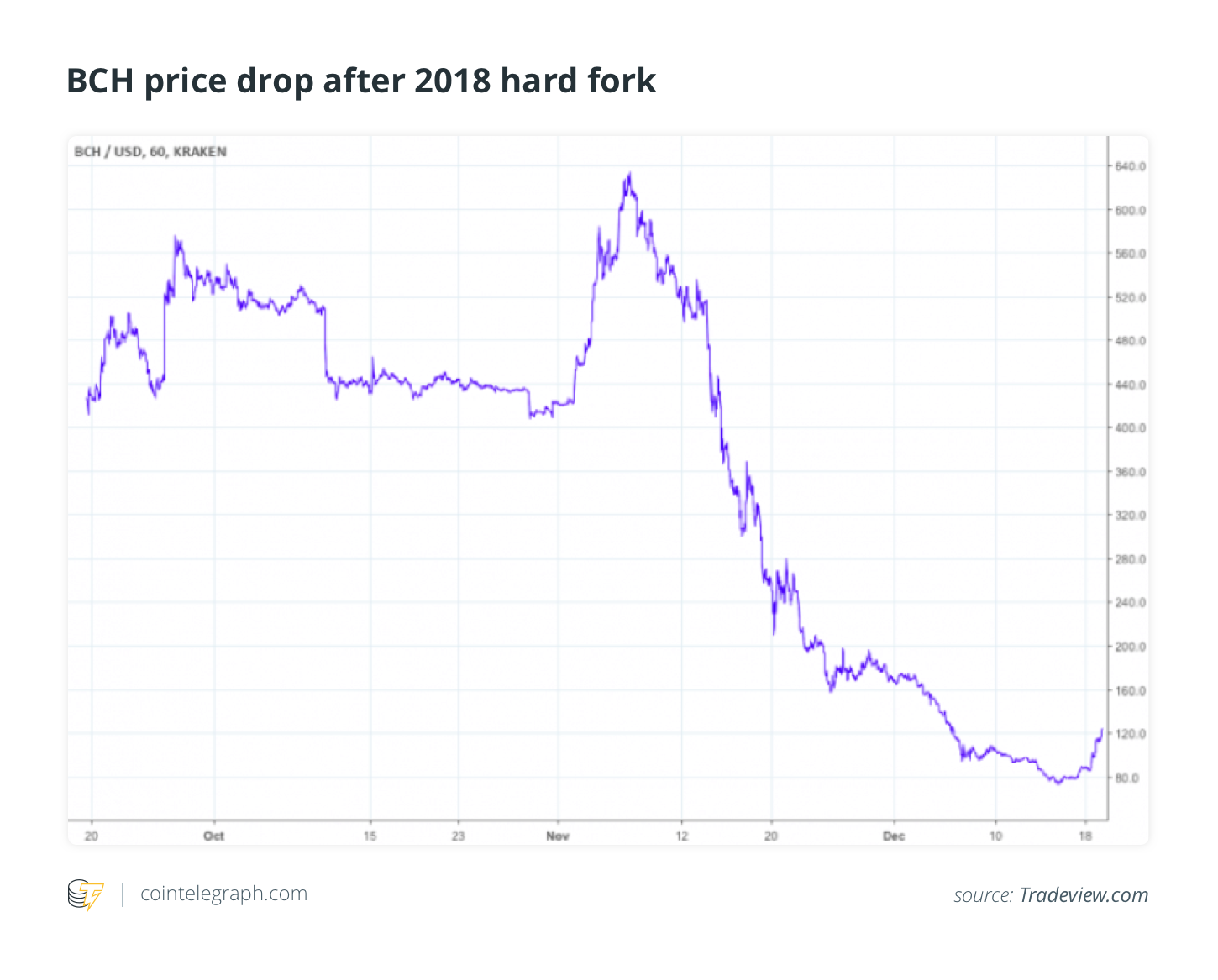 Richard Heart, an entrepreneur who speaks regularly on blockchain and cryptocurrency issues, shared his thoughts with Cointelegraph. He said that BCH used to be worth 50% of Bitcoin’s value and now it's worth 3%.

In his response to the conflict between Bitcoin and Bitcoin Cash supporters, Heart argues that it is a bad idea to try to make a cheaper, faster Bitcoin. He believes that:

"The @Bitcoin account spent quite a long time promoting fake Bitcoin as real Bitcoin. If you don't know why they stopped, you won't know why they might start again, or what their next scam will be. You can't actually own a Twitter account, twitter can just let you use one. It's against their TOS to sell them."

In Heart’s opinion, just because someone is giving away free coins to users like BCH did, it does not mean that there is support for Bitcoin SV. He went on to add: “Every minute spent on the fork drama could have been spent onboarding new users to the real bitcoin instead of confusing them.”

The strange behavior of the @Bitcoin Twitter account has triggered a debate about whether a consensus can be achieved in the community. Questions about Bitcoin’s scalability and whether the Bitcoin Cash hard fork have played a big part in this dilemma, and the answers are not obvious.

Even though Bitcoin Cash delivered on its promise of cheap peer-to-peer transactions, its key weakness is centralization. Plus, industry participants might agree with Klumov that the BCH network is “struggling to find minders support, especially after Bitmain’s exit,” this perhaps sends a signal to institutional investors that supporting the BCH network could be a relative gamble.

Related: Bitcoin Dominance Growing — What It Could Mean for Altcoins

Bitcoin, on the other hand, is not just the most popular cryptocurrency but is also around 30 times bigger than BCH in terms of market capitalization. Even though the BTC network struggles to keep up with transactional demand at times, Klumov explained that Bitcoin’s “hash rate has doubled this year alone.”