Cumberland, the Chicago-based cryptocurrency trading unit of DRW Holdings LLC, reported a sharp, sudden spike in large-scale Bitcoin (BTC) transactions the evening of Monday, April 1. The company revealed the data in a tweet on April 4.

The series of thirteen orders that the trading desk tracked all exceeded 1,000 BTC (about $4.9 million at press time). Cumberland — which has been operating an over-the-counter (OTC) crypto trading desk since 2014 — noted in the tweet that:

“The post-trade analysis of Monday evening’s price action revealed a series of large bids (>1,000 BTC per order) within a 1 hour span, which appear to be actual buyers vs. forced liquidations.” 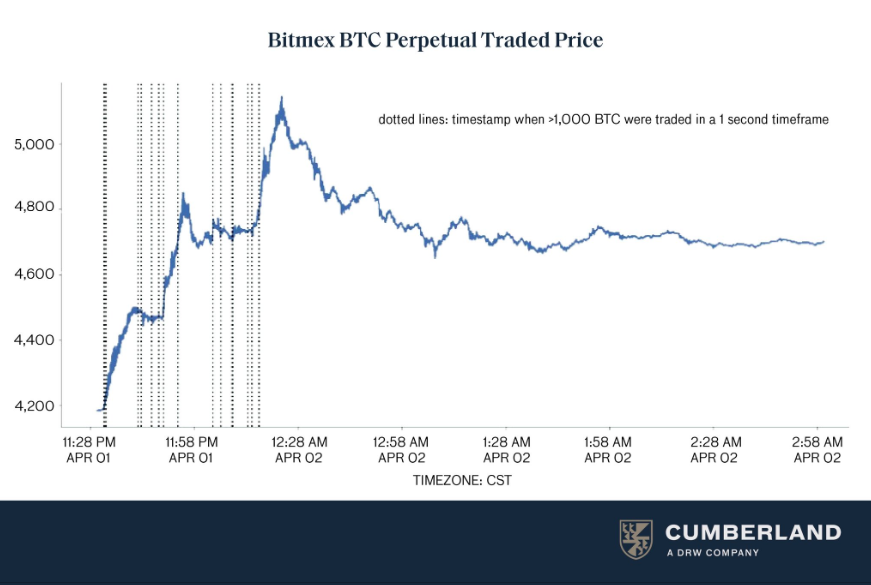 In a follow-up to the tweet, Cumberland’s Global Head of Trading, Bobby Cho, clarified that the data represented “executed, economically binding trades.”

In a separate update on Twitter earlier this week, Cumberland tweeted that Bitcoin had “moved more than 10% for the first time in 8 weeks,” stating:

Cryptocurrency markets have this week reported their first bullish uptick of 2019, with Bitcoin beginning a sharp rally overnight April 1-April 2, gaining 14 percent in about an hour to push over $4,500 for the first time this year. The coin then broke above the $5,000 mark on April 3.