Supply, demand and the April bull market: Why MakerDAO’s DAI hasn’t been all that stable.

Stability has become a holy grail for the crypto market, and right now, one of the biggest stablecoins is MakerDAO's DAI. Launched in December 2017 as an ERC-20 token, it's pegged 1:1 with the United States dollar, with its peg being maintained via over-collateralization with ether (ETH). In other words, users receive the equivalent of $1 in DAI by depositing more than $1 in ETH, and they can later reclaim their collateral by repaying the DAI they've received plus a “stability fee” in MKR, MakerDAO's other (nonstablecoin) token. By charging users this additional fee, the MakerDAO system theoretically prevents the value of DAI from dropping below $1, since the fee makes it expensive to mint more DAI tokens.

However, as elegant as this system is in theory, it recently hasn't been working quite as well as intended. DAI has been below $1 for much of 2019 and has even dropped under $0.95 on a couple of occasions. MakerDAO users have therefore voted to increase the stability fee on five separate occasions this year, with the most recent vote on April 11 deciding that the fee will rise to 11.5% per year.

But even with this hike, the MakerDAO community isn't sure that the value of DAI won't keep fluctuating until more substantial and longer-term solutions are implemented. Despite the infighting that has occurred recently regarding MakerDAO governance and transparency, it is nonetheless hopeful that such solutions will be found and agreed upon, and that DAI will become the “default stablecoin” for the wider cryptocurrency community.

People are buying DAI to go long on ETH 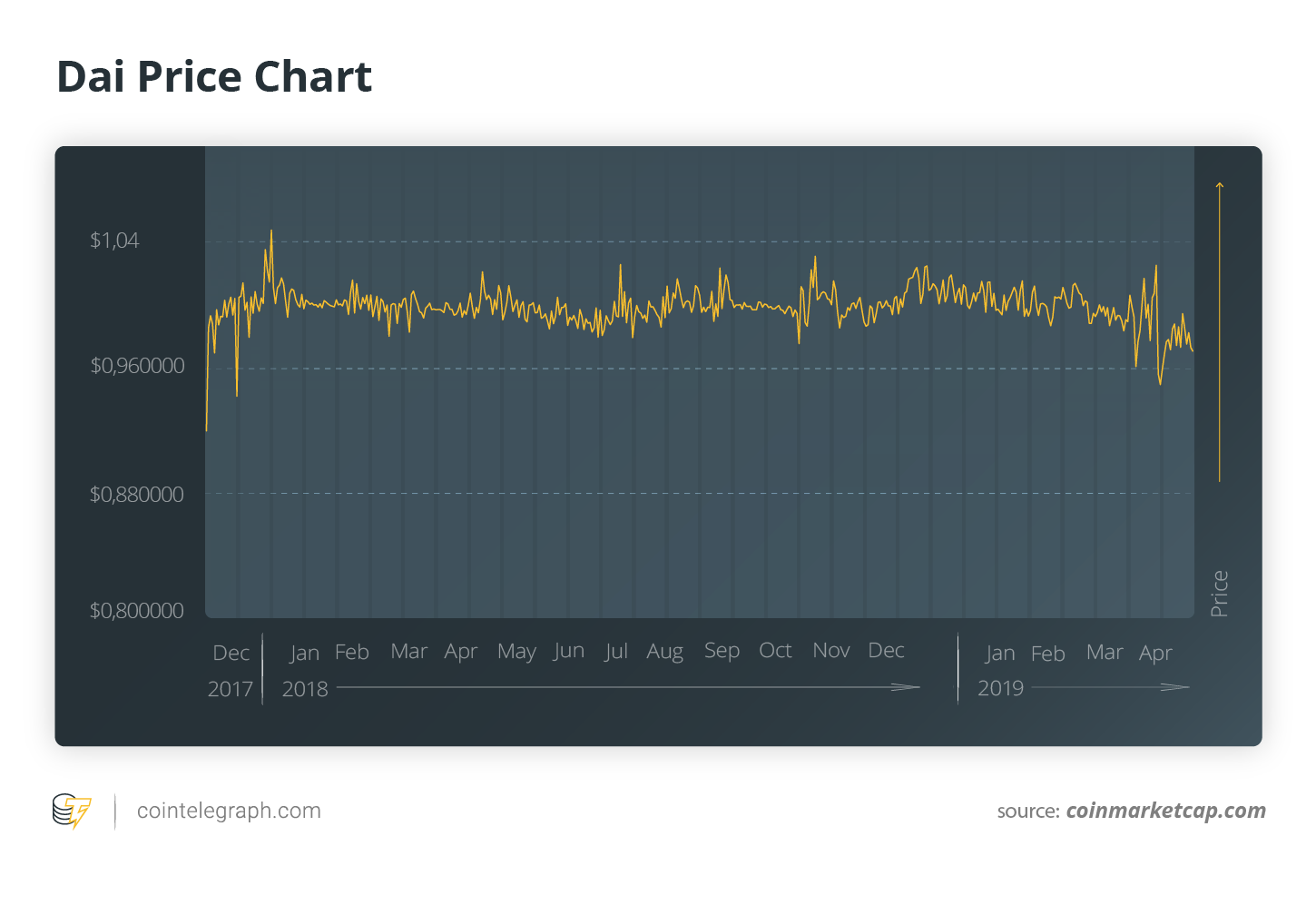 And as Steven Becker, the president and chief operating officer of MakerDAO, told Cointelegraph, this variation is largely the product of one of the most basic economic forces: supply and demand.

"The price has hovered below $1 simply because the supply has outpaced the demand for Dai. As a result, the MakerDAO community has been increasing the Stability Fee in order to incentivize CDP owners to close out their positions and thus reduce the supply."

For those who aren't familiar with the inner workings of MakerDAO, "CDP" stands for collateralized debt position. This is what MakerDAO users open whenever they deposit some ETH — the collateral — and receive DAI tokens in return. As the holder of CDPs, they're subject to a percentage-based stability fee, which accumulates each year. And because it accumulates each year, it incentivizes holders to return their DAI, thereby keeping supply low and the price stable.

Of course, matters are complicated by the use of ETH as collateral, which means that MakerDAO users are effectively going long on ETH when they open a CDP. What this means is that CDP owners can borrow DAI in order to purchase additional ETH (additional to the ETH they used to open the CDP), and if ether increases in price, more users will want to do this, since they will come out ahead — in comparison with simply buying ether with, say, U.S. dollars.

And in fact, DAI's failure to reach its peg has been exacerbated not only by the gradual improvement in ether's price since late January, but also by the post-April 2 bull market, when ETH (among other cryptos) increased by over 16% in a single day. Because ETH has been rising so spectacularly as of late, more traders have wanted to open CDP positions and use DAI to buy more of the other cryptocurrency (i.e., ETH). At the same time, because the value of DAI sticks — more or less — within the $0.98-$1.02 range, demand for DAI in and of itself hasn't risen. And as Lawson Baker, head of special projects at Tokensoft and a participant in recent MakerDAO community calls, explained, this has created a supply-demand imbalance.

"Over the past few months, DAI has been struggling to maintain its peg to the US dollar given demand for MakerDAO loans exceeds the demand for the DAI created by when those loans are issued."

So, in order to address this imbalance and make its stablecoin more, well, stable, MakerDAO has voted to increase the stability fee on five separate occasions this year. In theory, this will make it less profitable for users to open CDPs. That said, as of writing, DAI is still valued at $0.97, while the community is already voting on yet another fee rise. At the same time, any further spikes in the price of ETH might continue to make such increases irrelevant.

"In February, the Stability Fee was increased twice, each time by 0.5%. In March, the Fee was raised by an additional 2%, and then by 4% two weeks later. The impact of these combined increases was insufficient to restore the peg, indicating that the appropriate rate is still higher."

Solutions that go beyond a simple fee increase remain controversial, yet the MakerDAO community appears to be gravitating toward a multi-pronged attack that combines fee adjustment with some kind of means for boosting DAI demand and for limiting DAI supply.

"The are four ways to fix this problem," Baker explained. "(1) increase the interest rate on a MakerDAO loan, (2) find ways to increase DAI usage and as a result demand for DAI, (3) limit the supply of DAI that can be created (i.e. this functions as a MakerDAO debt ceiling for loans akin to the U.S. government’s debt ceiling, or (4) a combination of all three."

Even though he doesn't offer specific ways of boosting DAI usage, Baker nonetheless affirms that "a combination of all three is the best long term approach." Such a combination may indeed have the best chance of gaining wider community support, something that will be vital if MakerDAO is to solve its stability issues, since Becker told Cointelegraph that the MakerDAO Foundation can't itself do such things as lower the debt ceiling.

"The Maker Foundation cannot make any decisions related to the debt ceiling. That responsibility lies with MKR holders. The MakerDAO community could consider any solution that follows the principles of Decentralized Scientific Governance (If ideas are supported by the appropriate models and data, they are discussed by the MakerDAO community in a variety of social media platforms, including the weekly governance call."

There is, however, one more problem that complicates the stability issue and that might distract attention away from an agreement on a solution — at least, in the short and medium term. This is the age-old problem of governance. And in MakerDAO’s case, such problems revolve largely around the anonymity of its board, which consists of nine unknown members and which is being increasingly criticized by community members for undermining the transparency of MakerDAO's governance.

In a fractious April 9 community call, much of the discussion was consumed by this problem, with Chris Padovano — a former legal counsel for the MakerDAO Foundation — continually pushing for MakerDAO to publish its bylaws and make clear how its governance structure operates. More recently, a leaked letter asserted that five members of the board were pressured to resign by MakerDAO CEO Rune Christensen, who (according to an attorney) had claimed that these five had “engaged in a ‘conspiracy’ and breached their fiduciary duties as directors.”

Despite such tensions, MakerDAO defends the anonymity of its board, which decides how development funds are used and which also holds around 27% of MKR governance tokens (which are needed to vote on governance issues). "The anonymity of the MEGF board is preserved due to security concerns," Becker said. "Currently, the board members are also the signatories of the Foundation's multi-sig account."

However, while MakerDAO is still defending this anonymous setup, it is planning to introduce greater transparency into how the board operates, with a recent blog post revealing that it will be inviting input over the coming weeks from community members on an "ideal" board structure. As Becker explained, "The Maker Foundation is pursuing a formal and public board structure," alongside a separate custody solution for the foundation's multi-sig wallet, which holds development funds.

The renovation of its governance structure will help MakerDAO to arrive at more effective solutions. However, more importantly for MakerDAO's stability issues, the MakerDAO Foundation also plans to shift from a collateral system based purely on ETH to one that involves various cryptocurrencies. "Currently, the Maker Foundation is intent on shipping Multi-Collateral Dai (MCD) later this year," Becker affirmed. "MCD will allow new collateral types in addition to improved stability mechanisms."

The introduction of multi-collateral DAI should enable the stablecoin to avoid becoming too reliant on ETH for maintaining its peg, even if it could be argued that a crypto market that rises (or falls) as a whole will expose DAI to the same risks that it faces now. But according to Becker, its introduction will ultimately help MakerDAO and its community achieve its "primary goal" of ensuring "the integrity, stability, and growth of Dai, as we move toward our objective of leveling the economic playing field for people around the globe."

And while it's certainly true that there's some division on how exactly to solve DAI's stability woes, the community is generally confident that DAI will only grow in stability and importance in the coming months. "Over the next year, DAI and DAI-derivatives will become the default stablecoin for crypto-native projects," Baker predicted. "We are already seeing this with DAI adoption by Augur in their upcoming V2 fork and other projects."