Up until the most recent correction, Bitcoin (BTC) price was repeatedly pushing above $10,300 and attempting to reach a 2020 high above $9,500. 2020 started with a strong upward trend and altcoins followed Bitcoin’s price action, as thoroughly reported in Cointelegraph.

This aggregate trend leaves the door open for a full bullish period ahead since the last Bitcoin high growth period was between April and June 2019.

The volatile behavior observed since the start of the year may be causing the traditional assumptions associated with Bitcoin and other top currencies to be challenged. One of those assumptions is the belief that Bitcoin is closely connected to gold. 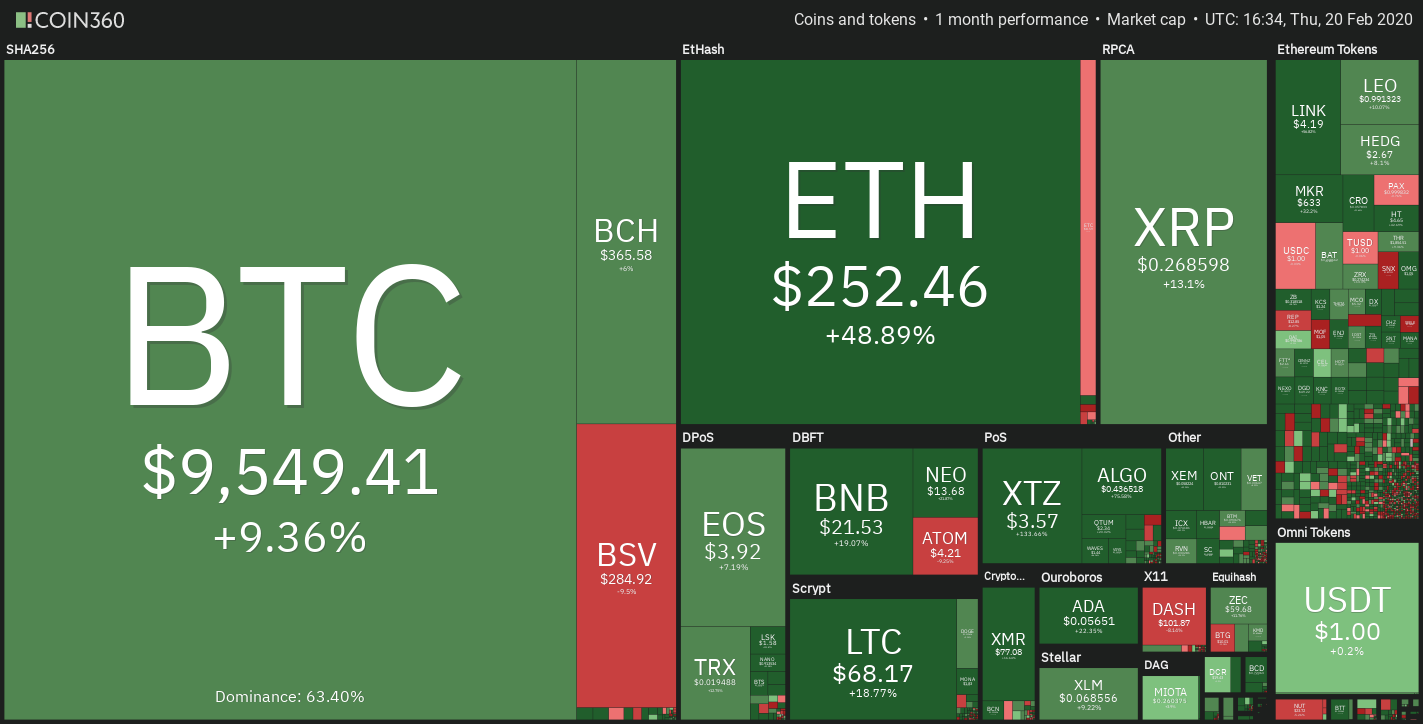 Cryptocurrencies and the precious metals narrative

A previous analysis reported by Cointelegraph has shown that the digital gold narrative attributed to Bitcoin may not be as realistic as investors believe. The lack of a significant relationship between Bitcoin returns and gold returns as well as the low correlations across the years are contributing to the challenge to the narrative.

The same can be said about the association between Litecoin and “digital silver”. The critical analysis of the relationships between cryptocurrencies and precious metals opens the door for further research.

Correlation between top 10 cryptocurrencies and gold

In the opposite direction, Tether (USDT) has an inverse correlation with gold at -37.7%. This is surprising since the behavior of a stable coin like USDT could be more correlated with a precious metal like gold than a much volatile coin like Bitcoin. 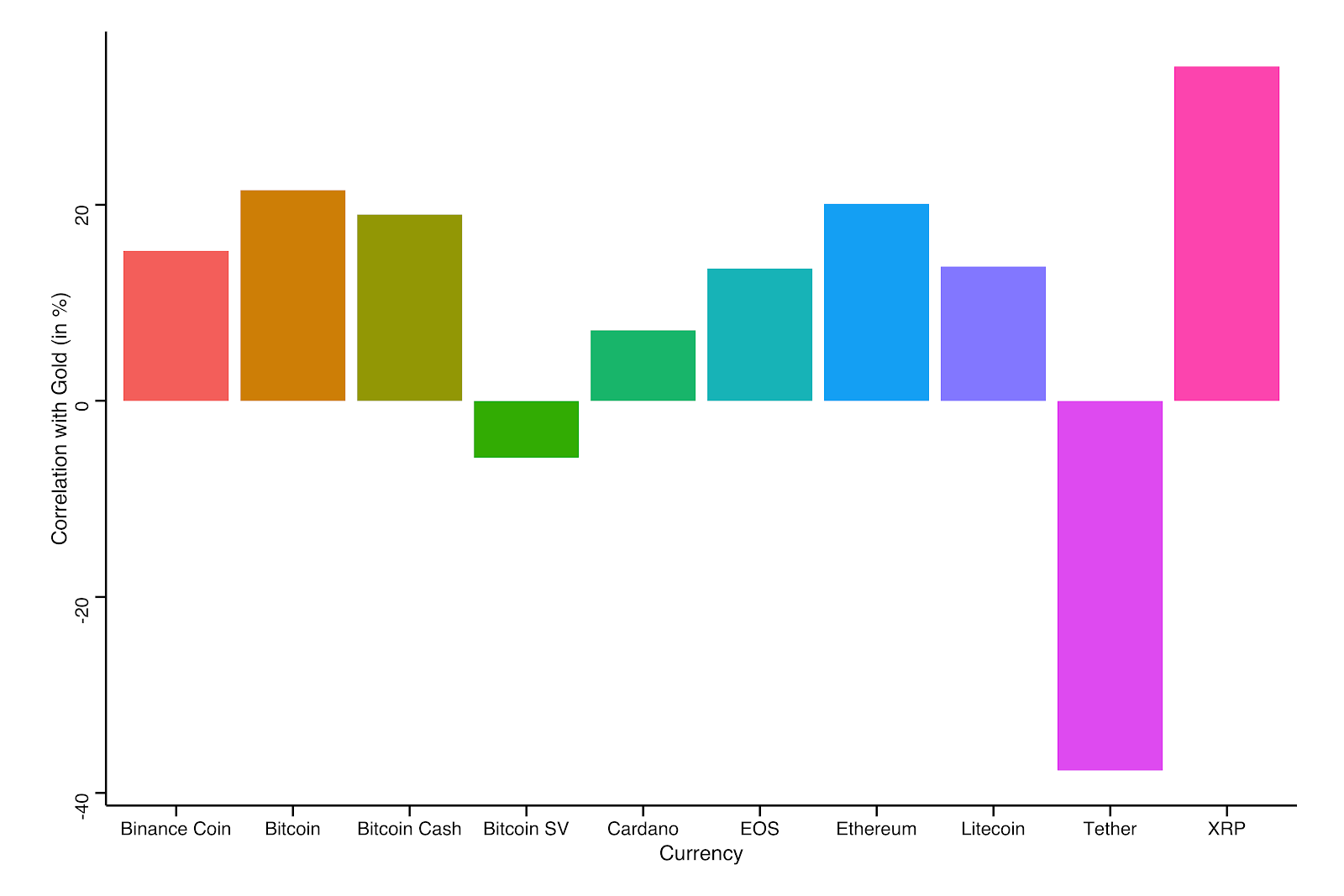 Correlation between Bitcoin and the top 9 currencies since Jan. 1, 2020.

By looking at a wider time frame like 2019, the assumption that Bitcoin is more related to gold is sustained. Bitcoin is correlated at 15.5% with gold for the entirety of 2019, being the most correlated currency with gold from the top 10.

As seen before, Bitcoin Cash is the second most correlated currency with Bitcoin at 8.2%, followed by Bitcoin SV (BSV) at 7.3%. For the entirety of 2019, XRP is less correlated (7.1%) with gold than in 2020, challenging the idea that a stronger correlation can be sustained over a long-term period. 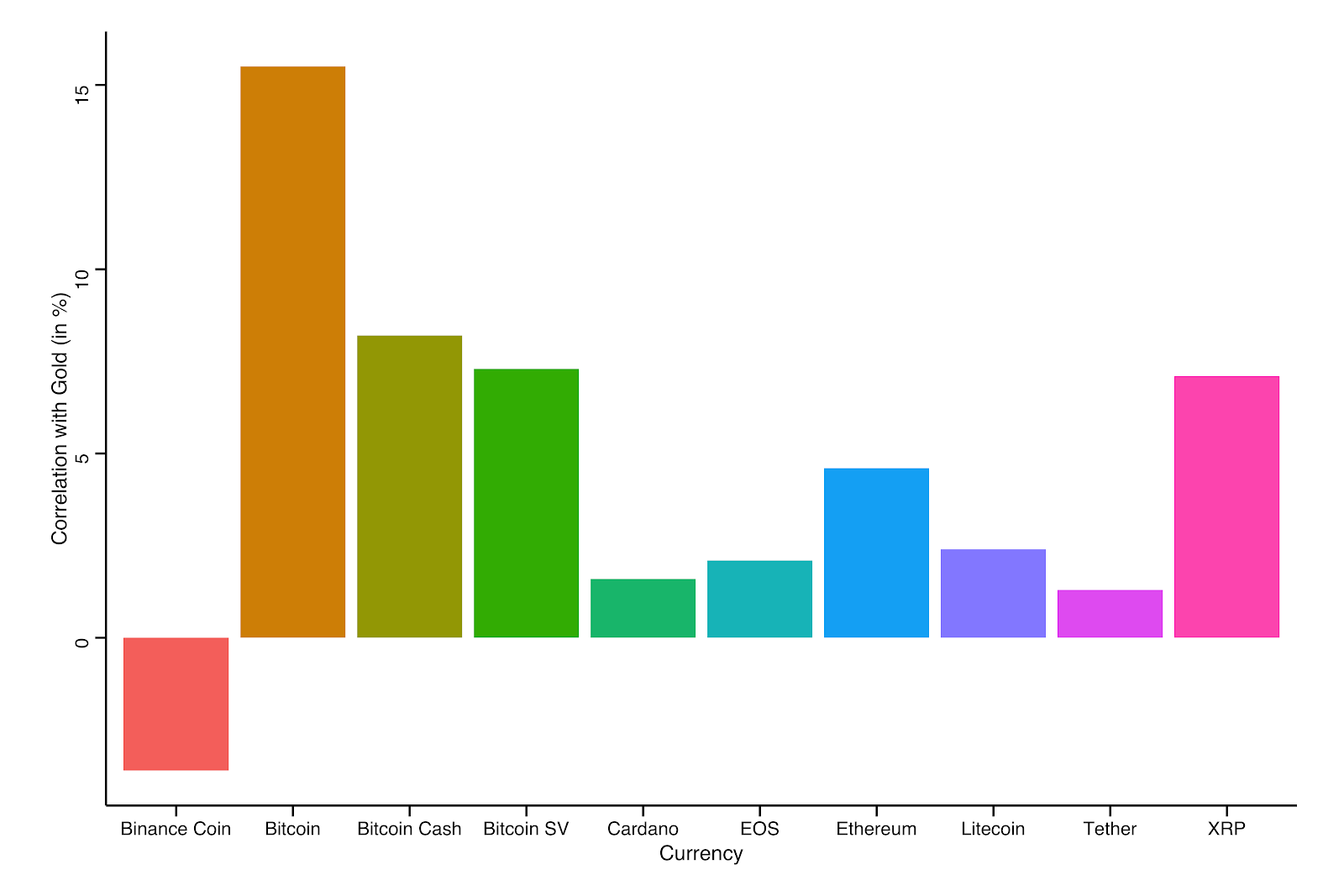 Correlation between Bitcoin and the top 9 cryptocurrencies during 2019.

Outstanding cumulative returns since the start of the year

The start of 2020 witnessed the start of a strong positive trend. If an investor bought any of the top 10 cryptocurrencies between Jan. 1, 2020 and Feb. 9, 2020, they would be looking at a cumulative return of at least 134%, when Tether is excluded from the analysis. From the top 9 currencies, Bitcoin produced the least profit, shifting one’s emphasis to the possible altcoin bull run ahead.

The biggest positive trend was seen by Bitcoin SV and Bitcoin Cash with a cumulative return of 228% and 179%, respectively. Other top coins like Binance Coin (BNB), EOS, Ether, Litecoin, Tezos (XTZ) and XRP offered investors a cumulative return between 138% and 167%. Meanwhile, gold prices grew by slightly more than 4% in January. 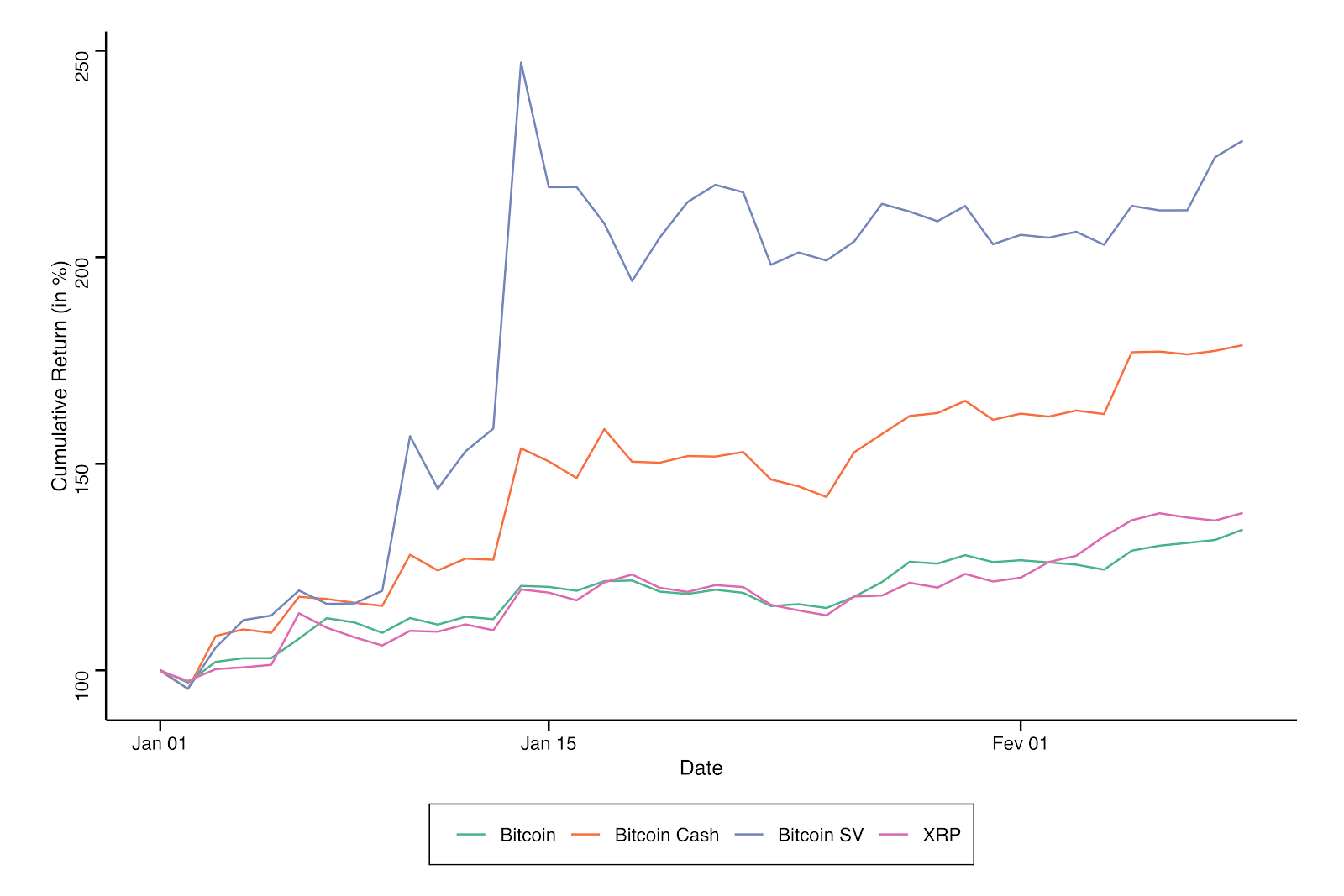 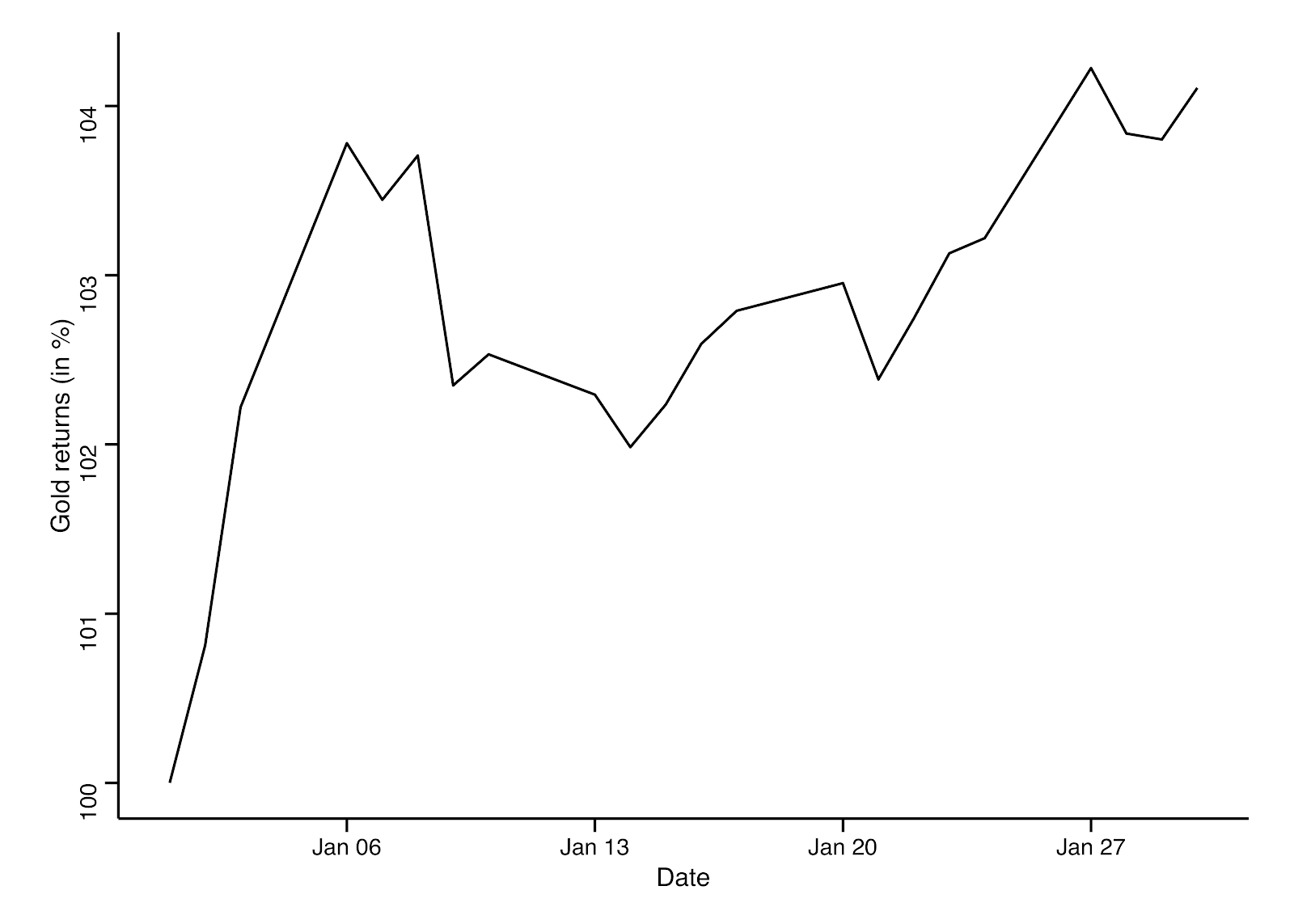 Cumulative returns for gold in January 2020.

Which is digital gold, XRP or Bitcoin?

A recent report from Coinbase suggests that Bitcoin will come closer to becoming digital gold due to underlying features of the network which are similar to the ones shared by gold as the scarcity of the asset aligns with the assumed bullish period ahead.