Dubai – the Blockchain Oasis of the UAE: From Public to Private Sector

Dubai and the United Arab Emirates are making concerted efforts to be global leaders in blockchain adoption.

2018 has seen some significant developments on this front but the foundations had been laid a couple of years ago.

Across the private and public sectors, there has been a push to incorporate this new tech to overhaul current systems. This includes as plans to launch a cryptocurrency that will be used by citizens and governmental departments. 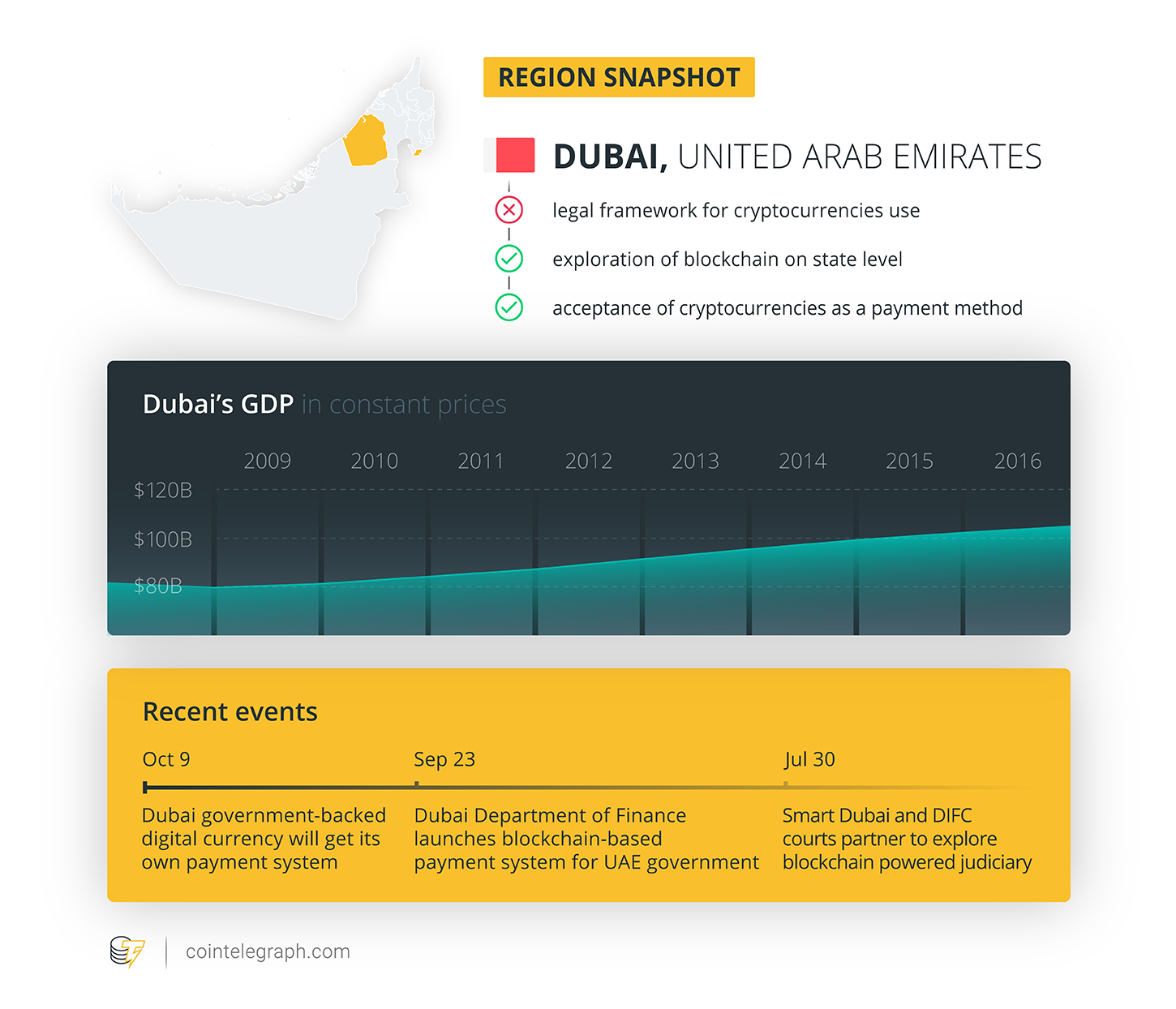 The first proposal for an official Dubai cryptocurrency called emCash came about in October 2017. The cryptocurrency is touted to be used for payments for governmental and nongovernmental services – and is pegged to the UAE Dirham.

Consumers could well be using emCash in the next few months after the government signed a deal with a number of parties to setup point of sale payments for the cryptocurrency.

The partnership was announced on October 9, which includes emCredit, a subsidiary of the Dubai Department of Economic Development, blockchain payment provider Pundi X and its partner Ebooc Fintech & Loyalty Labs LLC.

Ebooc will be responsible for providing point of sale terminals in retail outlets, while Pundi X is expected to create 100,000 point of sale units over the next three years.

The Central Bank of the UAE began working on legislation at the beginning of 2017 to address the use of cryptocurrencies in the country.

This culminated in a report by Abu Dhabi's Financial Services Regulatory Authority in October 2017, which released its findings on initial coin offerings (ICOs) and cryptocurrencies – classing them as securities and commodities respectively.

A swathe of apathy towards ICOs, with bans in countries like China, happened around the same time last year. This had a slight ripple effect, as other institutions and regulatory bodies put out warnings to investors centred on the associated risks of investing in ICOs. This saw UAE Central Bank Governor Mubarak Rashid al-Mansouri caution citizens against the use of cryptocurrencies – amid fears of volatility and criminal uses.

This was primarily due to the corresponding drop in value of various cryptocurrencies following China’s ban, as Al-Mansouri said in a speech at the Islamic Financial Services Board Summit:

“The risks of trading in digital currencies have clearly appeared when the prices of digital currency fell sharply after some countries announced a ban on using initial coin offerings.”

The negative stigma around ICOs seemed to continue into the new year, amid an overall decline in the crypto markets following all time highs in December. In the US, the Securities and Exchange Commission (SEC) led the way with no-nonsense attitude towards ICOs in February 2018.

The UAE Securities and Commodities Authority (SCA) also cautioned local investors about the inherent risks associated with ICOs. Given that they are not regulated in the country, investors had no means of legal protection against fraud.

In an effort to address these concerns, it is understood that the UAE in nearing the completion of a draft of regulations for ICOs in the country. This was reported in September 2018, and is led by the UAE SCA.

In 2016, the foundations were laid for Dubai to uncover startup companies that could help drive the way for the city to become blockchain-powered by 2020.

The UAE government founded the Smart Dubai initiative in 2013, an ambitious project looking to provide cutting edge technological innovations across the country, from technology to governmental processes.

A central part of the initiative is to improve government efficiency by using blockchain technology, in the hopes of making Dubai a global leader in the space. This includes a transition to digital systems which will see visa applications, bill payments, and license renewals move away from traditional paper documentation.

According to Smart Dubai, blockchain technology could redistribute up to 25 million hours of economic productivity by removing the need for paper document processing. The project also promised to benefit the tourism industry in Dubai as international travellers will have fast-tracked entry with pre-approved passport, visas, and security clearances.

Moving around the city will also be improved with approved drivers licenses and car rental, wireless connectivity as well as pre-authenticated temporary digital wallets.

An official Blockchain Strategy was launched in October 2016, in association with Seed Fund 1776, looking for companies building blockchain-based applications across a broad range of industries. In 2017 Dubai won the City Project award for its blockchain strategy, awarded by the Smart City Expo and World Congress in Barcelona.

In conjunction with the Smart Dubai initiative, in April 2018 UAE Vice President and Prime Minister Sheikh Mohammed bin Rashid eventually launched the broader UAE Blockchain Strategy 2021. At the time Sheikh Mohammed said that the project could save the UAE government up to $3 billion annually on document circulation, and drastically improve the quality of life and efficiency:

“The adoption of this technology will reflect on the quality of life in the UAE and will enhance happiness levels for citizens. 50 percent of government transactions on the federal level will be conducted using Blockchain technology by 2021. This technology will save time, effort, and resources and enable individuals to conduct most of their transactions in a timely manner that suits their lifestyle and work.”

Cointelegraph spoke with Muhammed Arafath, executive director at Apla Blockchain, platform helping integrate blockchain technology into government operations in a number of countries including India and the UAE, to get a first hand perspective on the current crypto climate in Dubai:

“Considering the vision which the Dubai government has set on being the ‘blockchain capital’ and the commitment for having most if not all of the government applications on Blockchain by 2020, Dubai is one of the most pro-blockchain governments in the region.”

Over the past two months, the UAE and Dubai have made significant progress in realizing some of the goals outlined in the Smart Dubai initiative.

Partnering with the Dubai Department of Finance, a blockchain-powered payment system was officially launched in September 2018. The Payment Reconciliation and Settlement (PRS) system aims to allow government entities like the Dubai Police, Roads and Transport Authority, and Dubai Health Authority to transact in real-time, providing a transparent system for intergovernmental processes..

According to local media outlet Zawya, the Dubai Electricity and Water Authority and the Knowledge and Human Development Authority have already been using the PRS system.

The tourism sector in Dubai is also expected to benefit from blockchain technology. In March 2018, plans for a virtual business-to-business tourism-specific marketplace using blockchain were unveiled. The Dubai Tourism Blockchain Marketplace will reportedly provide tourists with a platform that features real-time, transparent pricing of Dubai’s hotels availability.

From roads to the judicial system

Blockchain technology is also being leveraged to improve other areas of life in Dubai, from the streets of the city to its courts.

Thus, in February 2018 the Dubai Roads and Transport Authority (RTA) announced plans to launch a blockchain-based system in 2020 that would track the lifecycle of vehicles in the country.

According to media outlet Arabian Business, RTA chairman and executive director Mattar Al Tayer says the initiative should benefit almost every single player in the industry:

In July, Dubai International Financial Center Courts announced a formal partnership with Smart Dubai in order to set up a ‘Court of the Blockchain’ to facilitate improvements in the judicial system. The move would eventually create a blockchain-powered judiciary to help verify court judgements for cross-border enforcement.

Ambitious programs to lead the way

Countries like Malta and the UAE seem to be leading the way in terms of blockchain adoption. Having recognized the many benefits of the technology, strides have been made to actively get out ahead of other countries.

A seemingly important factor is the balance between accepting this new technology while providing the necessary frameworks to ensure investors are protected.

The UAE Blockchain Strategy 2021 is a clear indication of the efforts being made by the country to foster the development of blockchain to improve its own governance and the quality of life for people in the region.

This positive and proactive attitude towards the industry is proving a point, as Arafath told Cointelegraph:

“Dubai is clearly leading the region by example on the adoption of blockchain and crypto.”

As Dubai and the UAE continue to explore and develop technology with the use of blockchain technology, as well as provide a guideline for the use of ICOs and cryptocurrencies, the outlook in the region seems positive.