Here’s What You Missed at BlockShow Asia 2019

Binance CEO’s thoughts on China’s digital currency and insights on the future of stablecoins were just some of the highlights from this year’s BlockShow Asia.

Couldn’t make it to this year’s BlockShow Asia? Don’t worry. Cointelegraph has you covered with some key highlights of BlockShow Asia 2019 held Nov. 14-15 in Singapore.

Cointelegraph also took the occasion to announce the launch of a new consulting division. Industry experts will lead the new initiative, which will focus on expanding enterprise adoption of blockchain technology.

Zhao shared his perspectives on China’s central bank digital currency. He expects the system will be a blockchain-based version of the Renminbi that will help expand the currency’s economic influence:

“The Chinese government wants to push RMB’s influence globally. They want RMB to be competitive with the US dollar. In order to do that they really need to push this currency to have more freedom.”

“Xi Jinping made that announcement 10 days ago. The reason I know that is because my phone is sitting on my desk — my WeChat started buzzing and hasn’t stopped since.”

Overall, the experts at the event seemed to agree that while Bitcoin is just cryptocurrency, blockchain is a new connectivity framework. The speakers also held a panel titled “Collaboration in a Decentralized Ecosystem: Why Government And Corporations Need It,” which illustrated how blockchain technology is being used by governments.

The participants explained that, besides Bitcoin, blockchain allows for ecosystem connectivity and information in a trustless, decentralized fashion. Vinay Mohan, Managing Director of ConsenSys Singapore, said:

“We are talking here about an intermediate technology that connects different ecosystems providing a new form of governance.”

During a panel focused on blockchain scalability, all the speakers agreed that people have to choose between scalability and decentralization. Co-founder of Litecoin Foundation Xinxi Wang said:

“At Litecoin, we always choose decentralization and security over scalability. Unfortunately, we can’t do both, but we try to find something in the middle.”

Da Hongfei, the founder of smart contract-supporting blockchain platform NEO, shared his views on the current state of the decentralized web during the event. The NEO founder highlighted the problems deriving from monopoly, centralization abuse and single points of failure, proposing decentralization as the solution, saying:

“These standards should be transparent and decentralized. Data ownership should be given back to the users.”

Worth noting, CZ first met Da Hongfei at a panel in Shanghai in 2014. Now, they again shared one stage at BlockShow Asia 2019.

Meanwhile, Chief FinTech Officer at the Monetary Authority of Singapore Sopnendu Mohanty spoke about the importance of blockchain for the economy, highlighting its indispensability for the development of green finance.

According to him, blockchain can enable the monitoring, measuring and financing of what he refers to as “green assets.”

Perspectives on Bitcoin and altcoins

“99% of a [token’s value] is linked to speculation, and not to the value that solution can bring to society. This causes many startups to waste a lot of time producing and 'selling' the token, failing to develop solutions for where they were initially focused.”

Meanwhile, CEO and co-founder at Distributed Lab and author of “Blockchain and Decentralized Systems,” Dr. Pavel Kravchenko, shared his view that Bitcoin adoption by institutions may actually result in BTC price crashing. He said:

“Bitcoin is censorship resistant money, the first in the world. I don’t believe in institutional adoption. If this happens, Bitcoin will become not censorship-resistant. Then it won’t have this feature anymore and will crash to zero.”

On the other hand, during a panel titled “Unlocking Yield In Cryptocurrency Assets — Encouraging Institutions To Enter The Industry,” a number of crypto leaders shared their thoughts on how to make emerging fintech accessible to mainstream financial entities.

Head of Business Development Asia for Cumberland Justin Chow, in the end, said what he believes is needed to onboard institutional players:

“Custody, liquidity, and regulations are the top three petitions from institutional investors jumping into crypto.”

"Crypto is evolving, and the government can't try to regulate things it still doesn't understand. [...] I am still in favor of crypto regulation, but [it] needs to be done very carefully.”

On Nov. 15, Blockstream CSO Samson Mow said that Tether (USDT) is clearly the preference among investors but will not see a retail use case during a panel called “The progress of stablecoins — if any? Can I use it yet?”

Still, he noted that while Tether’s first mover advantage gave it a great advantage over competitors, he expects national cryptocurrencies to make stablecoins obsolete. He also noted:

“By definition, a blockchain is a distributed, decentralized, immutable ledger used to store encrypted data. On the other hand, AI is the engine or the ‘brain’ that will enable analytics and decision making from the data collected. But both AI and blockchain are in situations where they can benefit from each other, and help one another.”

Goertzel also announced a new partnership between SingularityNet and PayPal.

Finally, the show also hosted a startup competition called Crypto Busters with eight companies, after which the Board of Investors who judged the contest showed particular interest in six startups, namely Hacken, GamerHash, Chainstack, Keyless, Beatdapp and Holdex.

BlockShow Asia 2019 was sponsored by dozens of cryptocurrency companies and entities, including Changelly, Bequant, Bluehelix, Crypto.com, Apay and NGC Ventures and NEO, which joined the exhibition with a unique format of the zone being represented by its ecosystem projects such as Higgs, Guardian Circle, Liquefy, Switcheo, OnchainCustodian, Novem, CryptoFast, Ontrade. 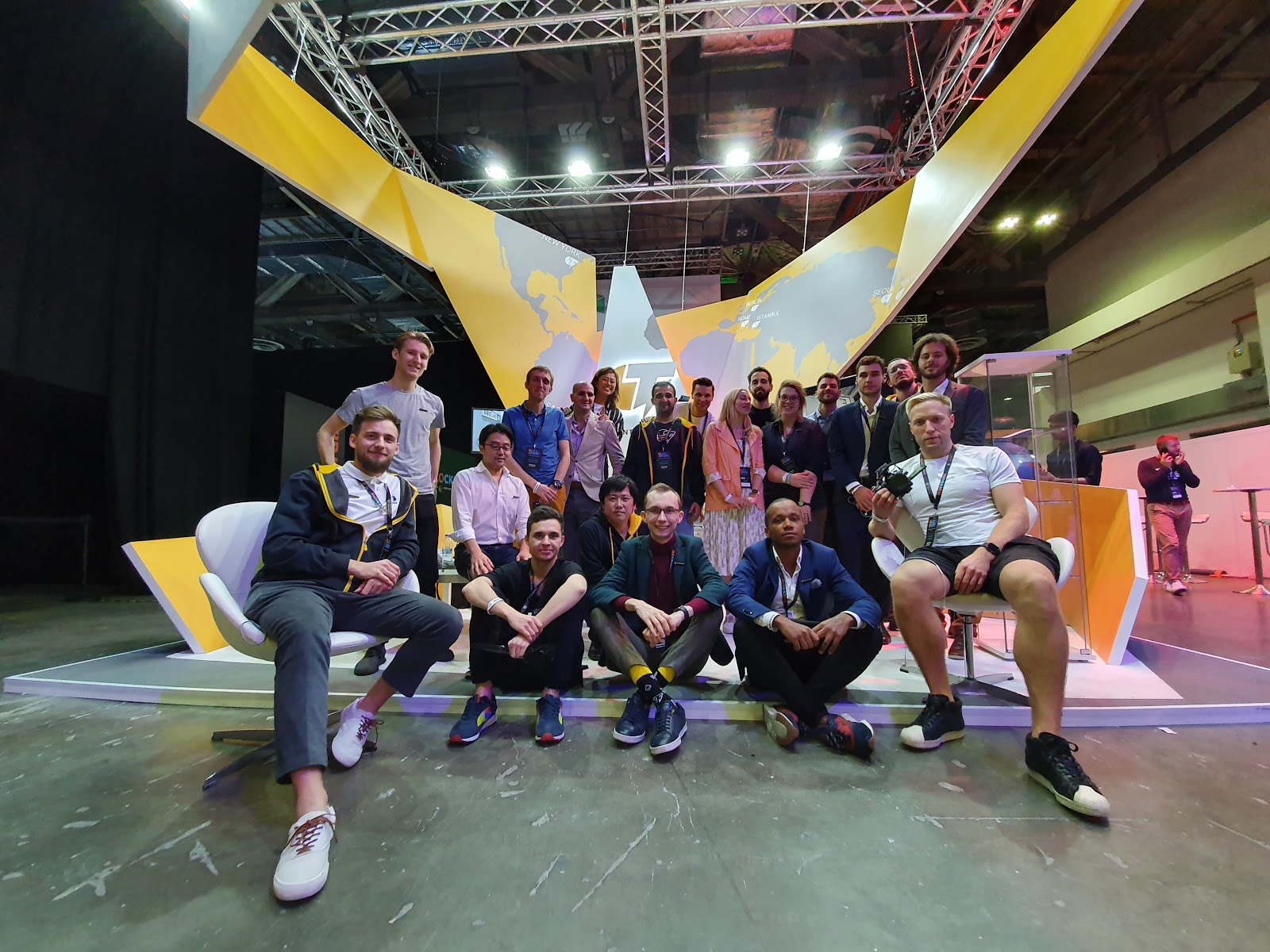 It was an action-packed couple of days at BlockShow, but we finally got the Cointelegraph team together for a group photo