Hodler’s Digest, October 1-7: WSJ Gets In and Out of Crypto, While BofA Sees a $7 Billion Future for Blockchain

The Wall Street Journal creates, then gets rid of, its own cryptocurrency and the Petro may be ready for public sale in November.

Cryptocurrency exchange ShapeShift has issued a denial in response to a Wall Street Journal article that the exchange had laundered around $9 million in ill-received funds. The article, which calculated a total of $88.6 million funneled through 46 exchanges, pinpointed $9 million as going through ShapeShift. In a blog post, Erik Voorhees, CEO and founder of ShapeShift, wrote that the information that the exchange gave the WSJ was misrepresented, and that the exchange has its own AML program that “deploys “blockchain forensics that are far more advanced than asking someone for their ‘name and address’.”

Wall Street Journal Creates, Then Destroys, Its Own Cryptocurrency

Major U.S. publication the Wall Street Journal (WSJ) has created and then halted the issuance of its own cryptocurrency in the pursuit of learning more about the industry. WSJ journalist Steven Russolillo created the “WSJ Coin,” in order to both shed light on the crypto economy as well as provide a use case for the journalism industry. However, after the two issued units were spent on two beers, the WSJ ethics head shut the project down, citing “ethical questions.”

Bank of America Estimates Blockchain Could Be $7 Billion Market

Bank of America (BofA) analysts said this week that blockchain has the potential to become a $7 billion market, providing a boost to corporations like Microsoft and Amazon. Although no timeline was offered, the BofA analysts used the figure that two percent of corporate servers could run blockchain at an annual cost of $5,500. However, the bank noted that the full capacity of blockchain has not yet been “built out.”

The U.S. Securities and Exchange Commission has given a time frame for reviewing the rule changes proposed in a series of application to list and trade Bitcoin exchange-traded funds. The SEC’s review period until Nov. 5 will affect nine different ETFs that were proposed by three different applicants: ProShares, Direxion, and GraniteShares. The SEC has solicited  “any party or other person” to file a statement in support or rejection of the proposed BTC ETFs in the review period.

Venezuela's President Nicolas Maduro said this week that the public sale of the national, oil-backed cryptocurrency Petro is set for November 5. According to Maduro, the official site of the Petro and the coin’s wallet are already live. The president also noted that the Petro is available on six major exchanges, without naming them, and that all oil purchases in and out of the country must be paid in Petro. Petro’s new whitepaper notes that the cryptocurrency is backed 50 percent by oil, 20 percent by gold, 20 percent by iron, and 10 percent by diamond assets.

"This whole blockchain deal has the potential it does only because it is applicable across national borders [and] income groups. The permutations and possibilities are staggeringly great,” — former U.S. President Bill Clinton

Two U.S. representative, Doris Matsui and Brett Guthrie, proposed this week a bill, the “Blockchain Promotional Act 2018,” in the House of Representatives. The bill notes that the definition of blockchain differs across different bills, and suggest that the U.S. Department of Commerce create a working group in order to form a common definition of blockchain, as well as come up with suggestions for government tech and communications bodies to research the potential impact of blockchain tech across the policy spectrum.

Two Chilean deputies, Miguel Angel Calisto and Giorgio Jackson presented a text to the lower house of Chile’s parliament this week for a blockchain resolution project. In the proposal, the legislators suggest that Chilean president Sebastian Pinera adopts blockchain in all public areas of the country. The resolution also offers to carry out studies on the advantages of blockchain-based security and energy solutions.

Ripple’s real-time settlement platform xRapid became commercially available this week, after the pilot phase had already been launched in May. The platform, designed with the intention of speeding up international payments, reportedly sources liquidity from the digital currency XRP on exchange globally. Three firms — Cuallix, MercuryFX and Catalyst Corporate Federal Credit Union — have thus far been signed up as clients.

US retail brokerage firm TD Ameritrade — which currently supports 11 million clients with investment services — is backing new cryptocurrency exchange ErisX. The details of the deal have not been made public, but Bloomberg reports that  investing company DRW Holdings and high-speed trader Virtu Financial are also participating with investments. According to the Wall Street Journal, ErisX will support both direct cryptocurrency sales as well as launch futures contracts in early 2019.

MoneyTap, a consumer-focused service co-developed by Ripple and Japanese financial services firm SBI Holdings, was launched this week. According to MoneyTap’s website, the app will use blockchain solution xCurrent to permit domestic bank-to-bank transfers in “real time.” Account holders at three participating Japanese banks   SBI Sumishin Net Bank, Suruga Bank and Resona Bank   can send funds using the mobile app, which is compatible with both iOS and Android devices.

Institutional investors are now bigger buyers of cryptocurrency transactions worth more than $100,000 as opposed to high net-worth individuals, Bloomberg reported this week. The publication’s research found that traditional investors like hedge funds are becoming more involved in the cryptocurrency market through private transaction, noting that miners have begun scheduling regular coins sales rather than holding or selling during market rallies.

Russia’s Nuclear Corporation To Use Blockchain For Increasing Efficiency

Rosatom, the Russian state nuclear energy corporation, will develop “4.0 technologies” including blockchain, artificial intelligence, and the Internet of Things in order to increase the efficiency of their manufacturing process. The corporation is also seeking new talent in the three new technological fields.

The Enterprise Ethereum Alliance (EEA) and Hyperledger reported this week that they would each join the other’s organization as “Associate Members” in order to foment enterprise blockchain adoption. Brian Behlendorf, Executive Director of Hyperledger at the Linux Foundation and Ron Resnick, Executive Director of the Enterprise Ethereum Alliance, wrote about their decision to join together, nothing that collaboration will “enable more active and mutual cross-community collaboration through event participation, connecting with other members, and finding ways for our respective efforts to be complementary and compatible”

Ethereum co-founder Joseph Lubin has invested $6.5 million in DLT startup DrumG Technologies through blockchain ecosystem ConsenSys. DrumG, notably headed by senior level executives at rival blockchain consortium R3, will now include Lubin as an outside member of its board of directors, with Drum3 now having a “significant presence” in ConsenSys’s ecosystem. DrumG plans to address the problems in the blockchain space with acception of multiple interconnected distributed ledgers in the corporate world.

Yale University, an Ivy League institution in the U.S., is reportedly one of of the investors in a $400 million investment into crypto-focused fund Paradigm. The fund was reportedly created by Coinbase co-founder Fred Ehrsam, former Sequoia Capital partner Matt Huang, and Charles Noyes, formerly of crypto fund Pantera Capital. Bloomberg notes that the fund reportedly plans to invest in “early-stage” crypto-focused projects, new blockchains and digital asset exchanges.

Binance Labs, founded by major crypto exchange Binance, has reportedly invested millions of dollars in decentralized digital content ecosystem Contentos. The exact amount of Binance Lab’s “multi-million” investment was not disclosed. Contentos noted in their press release that they plan to develop a decentralized ecosystem that will allow for more transparency and the monetization of content.

Korean Investment Partners (KIP), South Korea’s largest venture capital firm, has invested in TEMCO, the first time the company has invested in a blockchain startup. KIP, known for investments in firms like Korean search engine Naver and Japanese messaging app LINE, has invested an undisclosed sum in TEMCO, which aims to develop supply chain management solutions on blockchain for enterprises. 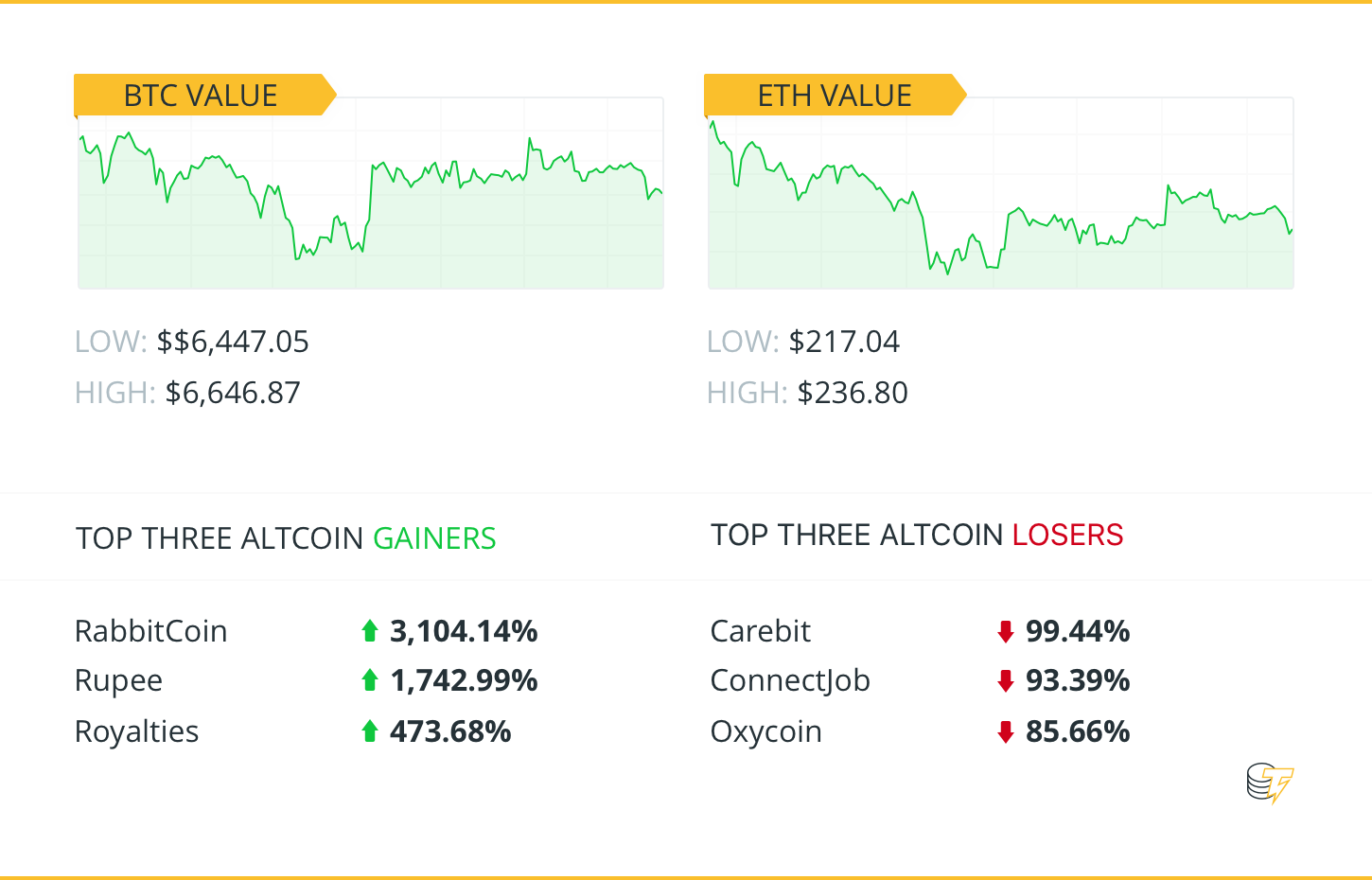 Crypto markets have had a calm week, with Bitcoin trading at around $6,525 and Ethereum at around $223. Total market cap is around $216 billion.

Spencer Bogart, an expert in crypto and blockchain from Blockchain Capital, said this week that Bitcoin has almost found its bottom. According to Bogart, the markets are down around 70 percent from their high, so he thinks that “Bitcoin is close to bottoming and so is the rest of the market.” Bogart also noted that media coverage of the crypto markets is “a piece of kindling that we are going to throw onto a future crypto bonfire when we have the next bull market."

Cryptojackers Have Compromised Over 30,000 Routers In India, Report Shows

Security company Banbreach’s recent report has found that the number of routers compromised by cryptojacking software in India has doubled in the past month, now numbering over 30,000. The report, which was compiled by tracking Internet traffic on devices with public IP address, grouped areas of India together from the most to the least dense. According to Banbreach, 45 percent of the compromised routers are located in the less-populated areas.

According to research, investors in German ICOs have lost as much as 90 percent of their capital. German business magazine WirtschaftsWoche looked at the token issue prices of ICOs in Germany in early September 2018, finding that German startup coins lost even more in value than Bitcoin and Ethereum so far this year. The magazine noted that only eight startups with a head office in Germany so far have completed an ICO.

Deloitte has outlined five basic areas that need development in order for blockchain technology to achieve widespread adoption. According to the firm’s report, blockchain must first overcome five issues —  the possibility of time-consuming operations, lack of standardization, high costs and complexity blockchain applications, regulatory uncertainty, and the absence of collaboration between blockchain-related firms — before in can be more widely accepted.

According to a report from the Wall Street Journal, automated trading programs (bots) are manipulating cryptocurrency prices. The WSJ writes that the lack of regulation in the crypto markets has allowed the bots to execute their abusive strategies on an industrial level. The article specifically references a $80 million digital currency hedge fund and its battle with “enemy bots” in the crypto markets.

CEO of crypto investment firm Galaxy Digital Capital has corrected his BTC price forecast — having said in November 2017 that BTC could hit $45,000 in a year — now stating that Bitcoin won’t actually break $9,000 in 2018. Novogratz also suggested that the falling prices in the crypto market are a result of companies currently selling crypto “just to fund the burn rate of the industry.”

The Future Of Cryptocurrency Legislation

Brookings looks at where exactly cryptocurrency regulation is going in the future, noting key concerns such as the defining of crypto and tokens as securities, the multiple class-action suits against ICOs, and diverging international views on regulation.

Learn how American rapper Soulja Boy “got on a computer and bought a Bitcoin” in his new album. The rapper further explains in verse: “This cryptocurrency man, it’s crazy. I got Bitcoin, and I got Litecoin. I’m going digital. Yah. Soulja.”