Hodler’s Digest: SEC May Make U-Turn on BTC ETF Rejections, While India and China Crack Down on Crypto Scammers

SEC rejects 9 BTC ETFS, then decides its decision will be reviewed, and one researcher thinks that BTC isn’t really using all that much energy.

The U.S. Securities and Exchange Commission (SEC) has rejected a total of nine applications to list and trade various Bitcoin (BTC) exchange-traded funds (ETFs) from ProShares, Direxion, and GraniteShares. However, the SEC then noted that it will be reviewing its decision, which was based on the claim that the products did not comply with the requirements by the “Exchange Act Section 6(b)(5), in particular the requirement that a national securities exchange's rules be designed to prevent fraudulent and manipulative acts and practices."

A clean energy expert has written an article explaining why she thinks that Bitcoin’s high energy consumption is not as bad as it is often made out to be. In her article, Katrina Kelly, strategy manager at the University of Pittsburgh’s Center for Energy, writes that we need to shift the debate around Bitcoin mining away from energy-intensivity focus instead on where that energy is produced and how it is generated. Kelly notes that although BTC mining consumed 30 terawatt hours in 2017, banking continues to consume an estimated 100 terawatts of power each year.

Police in China have arrested three “highly experienced” hackers suspected of stealing up to 600 million yuan (around $87.3 million) in crypto. At the end of March, an individual with the surname Zhang filed a complaint with local police in the northwestern city of Xi’an, claiming that his computer had been hacked and BTC, ETH, and other crypto holdings worth up to $14.5 million stolen. The police hypothesize that the suspects had used a remote attack to transfer funds from Zhang’s computer without leaving a trace, in what is reportedly considered to be a “rare case.”

Indian police have arrested a man who was allegedly involved in promoting the Bitconnect investment scam. The suspect is reportedly the India head of Bitconnect, the high-yield investment program that stopped operating in January 2018 after coming under scrutiny for appearing to be a fraudulent Ponzi scheme. According to a recently filed Freedom of Information Report (FIR), this is the third case under investigation in India associated with Bitconnect. Local promoters of Bitconnect are alleged to have fled with 1.14 crore (11.4 million) rupees worth of Bitcoin from one investor.

Analysis Shows Bitcoin Cash Use in Commerce Has Decreased

A review of payments received by the world’s 17 largest crypto exchanges has shown that Bitcoin Cash (BCH) use in commerce has gone down, according to data from blockchain analytics firm Chainanalysis. They found that BCH payments dropped to $3.7 million in May from $10.5 million in March, while the volume of Bitcoin (BTC) payments was estimated $60 million in May, down from a high of $412 million in September. Chainalysis also noted that between 10,000 and 100,000 BCH are held by just two wallets.

“It may be a stunt, but a stunt that is working. The question is though – working for whom? President Nicolas Maduro and his cohorts? Or the people of Venezuela? Sadly, it’s more likely to be the former,” — Dickie Armour, CCO at Corre Innovation

“I’m involved with, very soon, my first time being involved in a blockchain company [...] Our approach is not like a new currency, or something phony where an event will make it go up in value. It’s a share of stock, in a company,” — Steve Wozniak, Apple co-founder

The U.S. Commodities Futures Trading Commission (CFTC) has won a court order to permanently bar the operator of the New York-based firm CabbageTech Corp. for cryptocurrency-related “bold and vicious fraud.” Earlier this year, Patrick McDonnell, cryptocurrency promoter and operator of CabbageTech Corp., was charged with “fraud and misappropriation in connection with purchases and trading of Bitcoin (BTC) and Litecoin (LTC).” A New York judge has now ruled that McDonnell must pay $290,429 in restitution and $871,287 in penalties.

Gemini, Bitstamp, Bittrex, and bitFlyer USA have created a self-regulatory organization for digital commodities such as cryptocurrencies. The new group, dubbed “Virtual Commodity Association Working Group,” aims to help large-scale investors get more comfortable with the crypto market, work on formulating industry standards, and “be a precursor to the formation of a self-regulatory organization for digital commodities like Bitcoin and Ethereum.”

The World Bank and the Commonwealth Bank of Australia (CBA), the country’s largest bank, have issued a public bond exclusively through blockchain technology. According to the CBA, the $100 million ($73.16 million) deal entails two-year bonds that will settle August 28 and have been priced to yield a 2.251 percent return. The World Bank’s official mandate for the project had been first reported on August 10.

Union Bank AG of Liechenstein announced this week that it was issuing its own security tokens and in-house cryptocurrency backed by fiat. The bank, which has concentrated increasingly on blockchain this year, said issuing its so-called “Union Bank Payment Coin (UBPC)” was a further step towards becoming a “full-service blockchain investment bank.” The bank noted that the UBPC will act as a stable coin and will have fiat currencies like the Swiss franc to back it.

The U.S. Customs and Border Protection (CBP) agency will launch a live test of a blockchain-based shipment tracking system, combining the CPB’s legacy application and a blockchain-powered platform developed by the agency’s parent body — and the country’s primary border control organization — the Department of Homeland Security (DHS). While testing, the agency intends to establish standards of interaction between different blockchains in order to ensure that all firms and software will be easily connected to customs without the need for additional customization, as well as see how blockchain can enhance the verification of certificates of origin.

The de facto central bank of Singapore has signed a deal with multiple big name entities including the Singapore Exchange (SGX), Anquan, Deloitte and Nasdaq to ease digital asset settlements. Together, the parties will create “Delivery versus Payment (DvP)... capabilities for settlement of tokenized assets across different blockchain platforms,” with the latter three acting as technical partners.

The Shanghai Stock Exchange (SSE) and Insurance Asset Management Association of China (IAMAC) have agreed to cooperate on improving the insurance and pension industries with the use of blockchain tech. The SSE, the world’s fourth largest stock exchange, was joined by several major insurance industry players, including the IAMAC, Changjiang Pension Insurance Company, Tokyo Maritime Sunshine, and others in order to create a “new, high-efficiency, low-cost and safer insurance industry” through the use of blockchain technology.

U.S. technology firm Seven Stars Cloud Group (SSC) has partnered with with China’s largest electric bus operator, the National Transportation Capacity Co Ltd (NTS), to provide finance services using blockchain technology. The partnership will run for three years and was worth $24 billion. According to the press release, the SCC will provide “fixed income lease financing-based products” through its regulated network, which will in turn provide NTS with regulatory-compliant blockchain finance products.

UK-based trading platform eToro has signed an advertising deal with seven Premier League football clubs paid in Bitcoin for the first time, according to various sources. The UK soccer clubs involved are reportedly Tottenham Hotspur, Brighton & Hove Albion, Crystal Palace, Cardiff City, Leicester City Football Club, Newcastle United and Southampton. Blockchain and cryptocurrency integration in football stadiums and the industry will also form a focus for the partnerships, eToro so far not giving details as to the nature of the “exploration.”

Japanese financial services giant SBI Holdings announced this week that it had made a second investment, amount undisclosed, in troubled cryptocurrency exchange LastRoots. SBI had originally invested in LastRoots, which is one of the exchanges singled out by regulators for improvement following Coincheck’s $530 million hack in January this year, in December 2017. This investment aims to help LastRoots make the changes needed to adhere to regulation guidelines, as SBI will send in its own executives to bring practices up to scratch and bring the platform in line with regulation.

Blockchain marketing platform Atlas Protocol (ATP) has concluded a seed investment round of several million dollars led by SoftBank China Venture Capital, with participation by Baidu Ventures, Danhua Capital, and Fenbushi Digital. Atlas Protocol was formed by Nebulas Labs and the xGoogler Blockchain Alliance (xGBA), with co-founder of Jide Technology and the “first engineer” of Google Adwords Jeremy Zhao, as well as professor Ronghui Gu of Columbia University, all acting as technical advisors for Atlas Protocol. 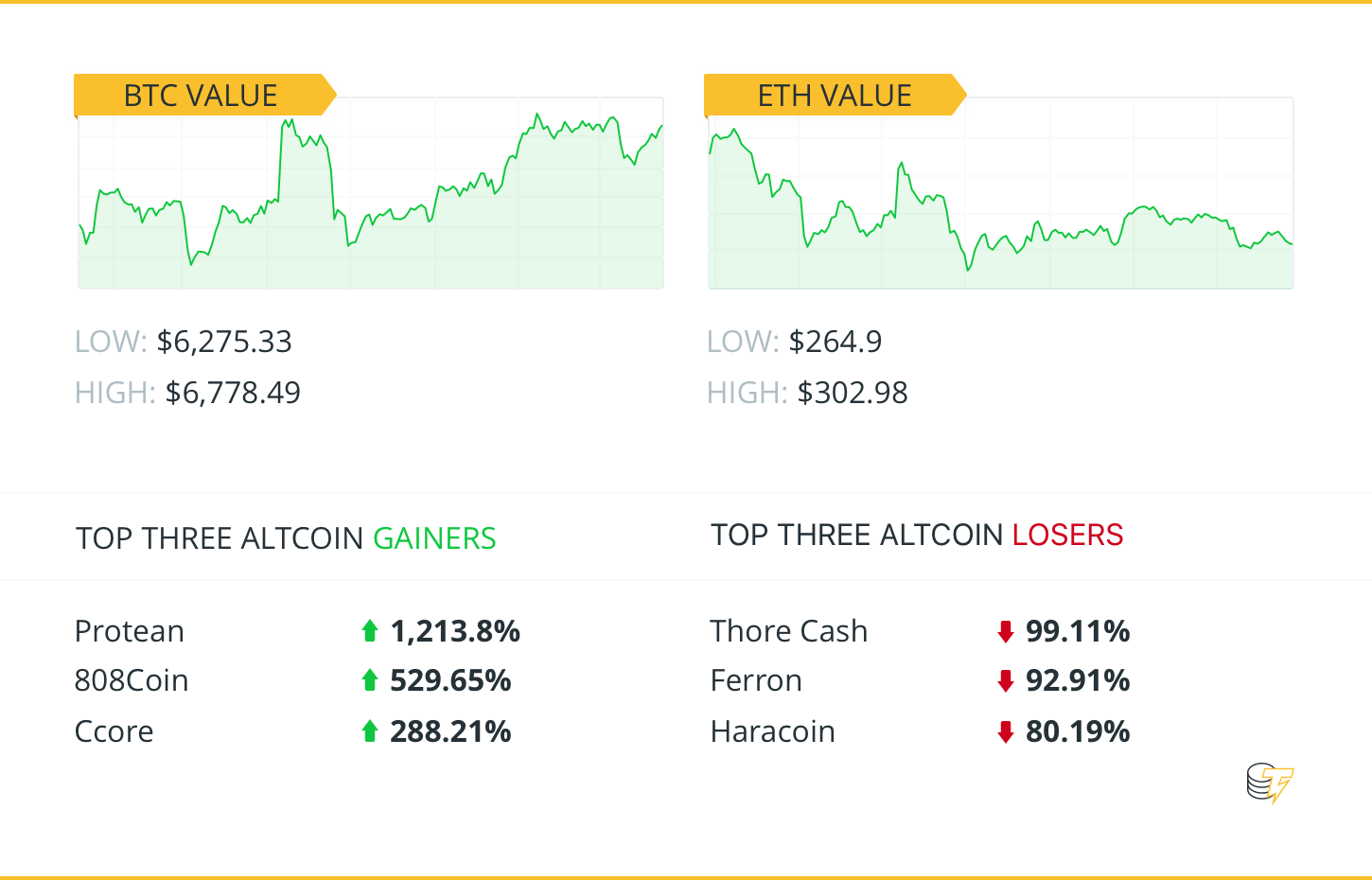 The crypto markets are slightly up this week after some recent lows, with Bitcoin trading around $6,706 and Ethereum at $275. Total market cap is around $215 billion.

An Ethereum scam application appeared on Android’s Google Play Store this week, offering a fraudulent “Ethereum” application – which seemed to just be a picture of the Ethereum logo – for around $388. The app, which has since been removed, showed that it had over 100 downloads.

The U.S. Federal Trade Commission has published a warning to “men” about a type of Bitcoin blackmail scam that involves threatening the victims with exposure of an alleged affair unless a BTC ransom is paid. Among the “classic signs” of blackmailing, the FTC lists “threats, intimidation and high-pressure tactics” and advises consumers to “report it immediately to your local police, and the FBI.”

North Korean hackers have infected an unnamed crypto exchange with malware for both Windows and macOS for, reportedly, the first time, according to a report by Kaspersky Lab. The malware, dubbed “AppleJeus,” entered the exchange’s systems after an employee downloaded a “tainted” app believed to be from a fake developer with fake security certificates in a major operation by North Korean hacker collective Lazarus Group.

A hacker who allegedly stole Bitcoin totalling more than $1 million by hijacking cellphones has been arrested by police in California. The alleged hacker used “SIM swapping,” a technique also known as a “port out scam,” to reportedly steal cryptocurrency from victims’ devices. Over a period of several years, the recently arrested alleged hacker and another suspect already under arrest used the funds to buy items such as luxury sports cars.

After the Bitcoin Boom: Hard Lessons for Cryptocurrency Investors

The New York Times takes a look at crypto traders from America to South Korea that lost large amount of their savings in the recent crypto market slump, delving into whether they think the risk of investing was worth it.

Bloomberg provides an analysis of all of history’s “biggest bubbles,” juxtaposing Bitcoin’s recent fall over crashes like the much-talked-about tulip crash and the dot com bubble.