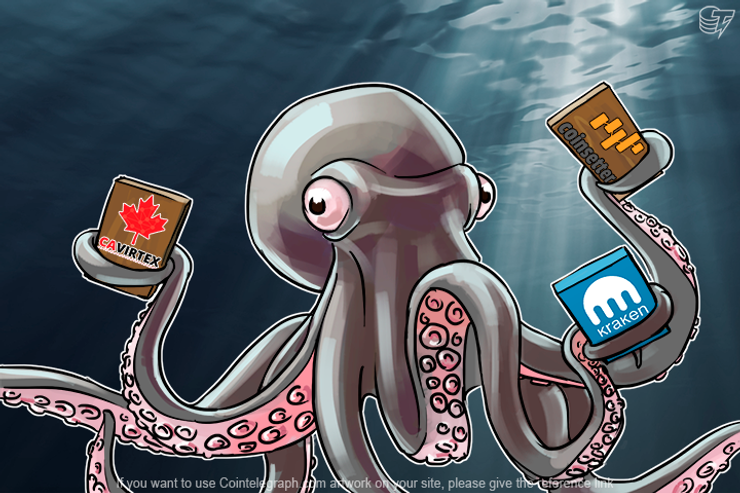 One of the world’s major Bitcoin exchanges Kraken has just announced today the largest M&A deal in Bitcoin industry and acuired two of the oldest BTC exchanges - Coinsetter and Cavirtex. Kraken is now officially coming to North America.

According to the official press release:

“Kraken will fully absorb both Coinsetter and Cavirtex brands in the acquisition. Client accounts of both exchanges will be automatically transferred to Kraken’s cutting edge, low fee platform on January 26, 2016. Once the transfer is completed, account holders will be directed to www.kraken.com to login, update account information if needed, and begin trading immediately.”

Coinsetter was founded in 2012 and became one of America’s most prominent national bitcoin exchanges, while Cavirtex is the oldest bitcoin exchange in Canada since 2011.

“The acquisition of Coinsetter and Cavirtex marks the beginning of a new era for Kraken. The consolidation of these three veteran giants is the largest exchange deal to date. Combined, we represent over thirteen years of bitcoin exchange experience in an industry that is only seven years old. Kraken has big, exciting plans for 2016.”

Kraken deposits and withdrawals for users in US and Canada

On January 19 2016, Kraken also announced a partnership with American payment provider SynapsePay. This will allow US users to make rapid, low-fee domestic USD deposits and withdrawals.

“Before this deal Kraken built out the platform to support the US and Canadian markets. With the acquisitions and expansion into 37 states (and DC) the addressable market has definitely increased and we're ready for an increase in volume.”

Clients in Canada will be able to use Kraken’s services through Canadian payment platform Vogogo.

All American and Canadian clients will be able make deposits to the Kraken bitcoin exchange for free until March 1, 2016.