Less than 1% of Australians used crypto for consumer payments in 2019, according to a survey by the Reserve Bank of Australia.

2091 Total views
108 Total shares
Listen to article
0:00
News
Own this piece of history

While some Australian authorities recognize cryptocurrencies as a form of investment, digital assets like Bitcoin (BTC) are apparently not very popular as means of payment in the country.

Australia’s central bank, the Reserve Bank of Australia (RBA), says that less than 1% of Australians used cryptocurrencies like Bitcoin to make a consumer payment in 2019.

The data is based on RBA’s own study, conducted in October and November 2019. Released on March 19, the RBA’s latest report is the fifth comprehensive survey of consumer payments in Australia. The purpose of the survey, which aggregated results from 1,100 people, was to find out more information about local payment preferences.

According to the RBA, the survey has provided further evidence that Australian consumers increasingly prefer to use electronic payment methods. In line with the growing role of digital commerce, Australians are specifically aware of cryptocurrencies as a means of payment.

Crypto is the third most familiar alternative payment method in Australia

Despite very few people using crypto for payment in Australia in 2019, the awareness level about the method is not low at all. According to the RBA’s data, over 80% of people had heard of cryptocurrencies, making it the third most familiar alternative payment method after “buy now, pay later” services and “tap and go” mobile payments.

As such, even more people in Australia are aware of cryptocurrencies as a payment method than services like in-app mobile payment, AliPay, or WeChat Pay, according to the RBA’s findings. 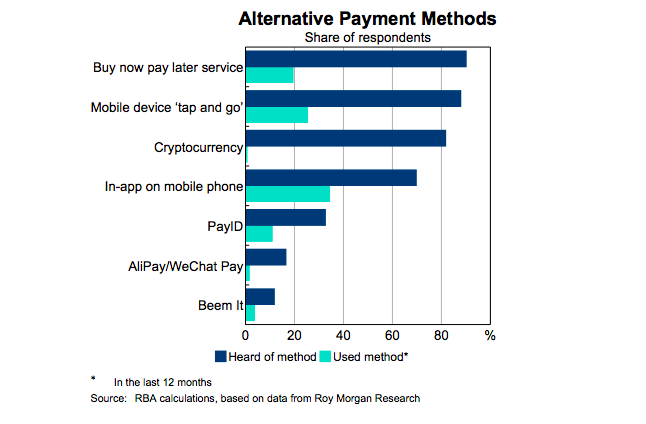 In the report, the RBA outlined the growing importance of electronic payments, emphasizing the increasing demand for low-cost, secure means of payment. In response to this, the bank said that it is now preparing a review of retail payments regulation for 2020. This review would consider a wide range of issues like competition, efficiency, and security of retail payments.

Crypto’s high level of user awareness in Australia may be due in part to the Australian government’s overall supportive view of the technology. In mid-2019, the country’s Department of the Treasury excluded cryptocurrencies from its new 10,000 AUD ($6,900) cash limit, as reported by Cointelegraph. Australia has also been actively involved in blockchain development, releasing its national blockchain roadmap in February 2020.

On Feb. 27, the district court of New South Wales ruled that cryptocurrencies like Bitcoin can be used as a security, with a judge claiming that crypto is “a recognized form of investment.”