Both the Litecoin Foundation and Litecoin’s founder have publicly apologized for attaching themselves to the now-defunct Litepay merchant solution.

The Litecoin Foundation published a bulletin Monday, March 26, notifying the public about the closure of “LitePay,” a potential Litecoin merchant solution similar to BitPay, and apologizing for “not doing enough due diligence” before promoting the company.

The notice, written by Director of Operations Keith Yong and addressed to the “entire LTC [Litecoin] community,” notes that the foundation is “greatly disheartened that this saga has ended in this way”:

“We are currently working hard to tighten our due diligence practices and ensure that this does not happen again. Litecoin was doing perfectly fine before the promise of LitePay and will continue to do so.  The ecosystem is far bigger than one company and is continually growing with support from many others with market ready products joining the space and fulfilling their promises to make it easier for the world to use Litecoin.”

Like everyone else, we got too excited about something that was too good to be true and we optimistically overlooked many of the warning signs. I am sorry for having hyped up this company and vow to do better due diligence in the future. https://t.co/khIjeHnyZ1

According to the bulletin, the Litecoin Foundation had recently refused LitePay CEO Kenneth Asare’s request for more funding for LitePay, citing a lack of transparency and explanation for how the previous money had been used.

The problems with LitePay had become apparent during an “Ask Me Anything [AMA]” Reddit post by Asare from March 16, where he was unable to provide answers for many of the questions concerning the company’s documentation, which Reddit users requested, the bulletin notes.

Other Reddit users pointed out the “scam” aspects of LitePay’s website: user BrockFukcingSamson had commented that the privacy policy for LitePay was just copied and pasted from Coinbase, but added an update that “they replaced ‘Coinbase’ with ‘LitePay’” without changing the text of the policy. As of press time, the two privacy policies have different wording.

In mid-February, Litecoin’s price had jumped 30 percent following LitePay’s Feb. 12 announcement that they would release their merchant service on Feb. 26, a promise that they were clearly unable to keep.

Litecoin has seen a drop in price since the Monday news of LitePay’s closure – although many of the top 100 coins on CoinMarketCap are also in the red. On Sunday, March 25 LTC was trading at a high around $162, and is currently at $144, down around 1.6 percent over a 24-hour period. 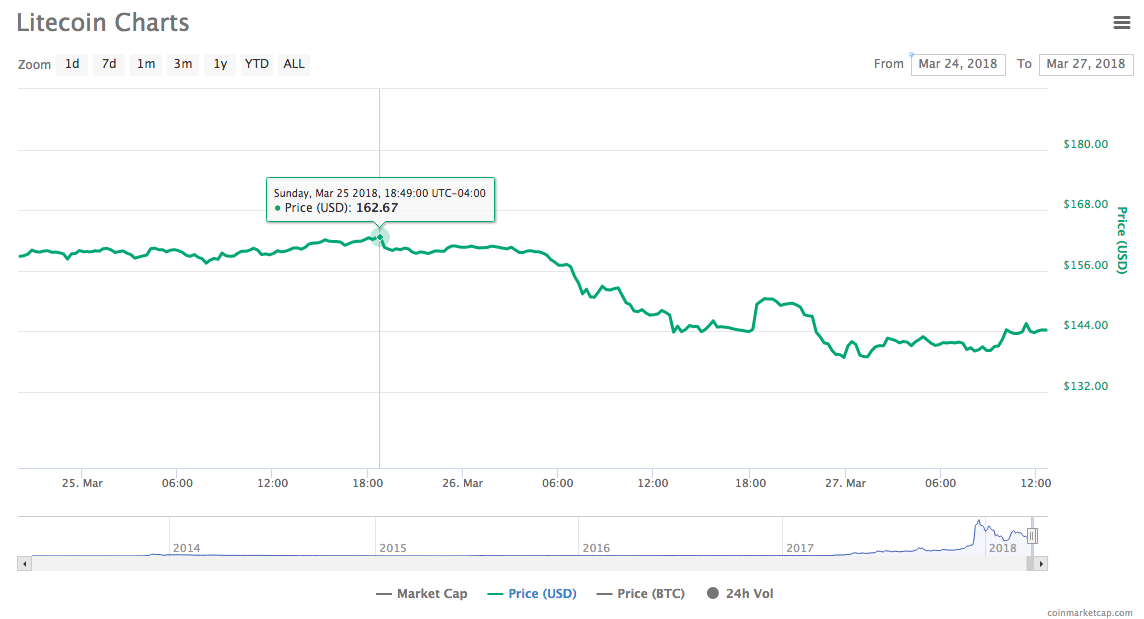