Binance IEO tokens such as MATIC and ONE have been flashing bullish signals amid some impressive price gains in recent days.

9752 Total views
115 Total shares
Listen to article
0:00
Market Analysis
Own this piece of crypto history
Collect this article as NFT

As everybody focuses on the recent price action of Bitcoin (BTC), some other cryptocurrencies are deciding to break out of their long term downtrend. Notably, Initial Exchange Offerings (IEOs) and Binance IEOs, in particular.

IEOs are similar to ICOs except that they are immediately launched on an exchange. The phenomenon started to gain attention at the beginning of 2019 through the launch of the Binance Launchpad. 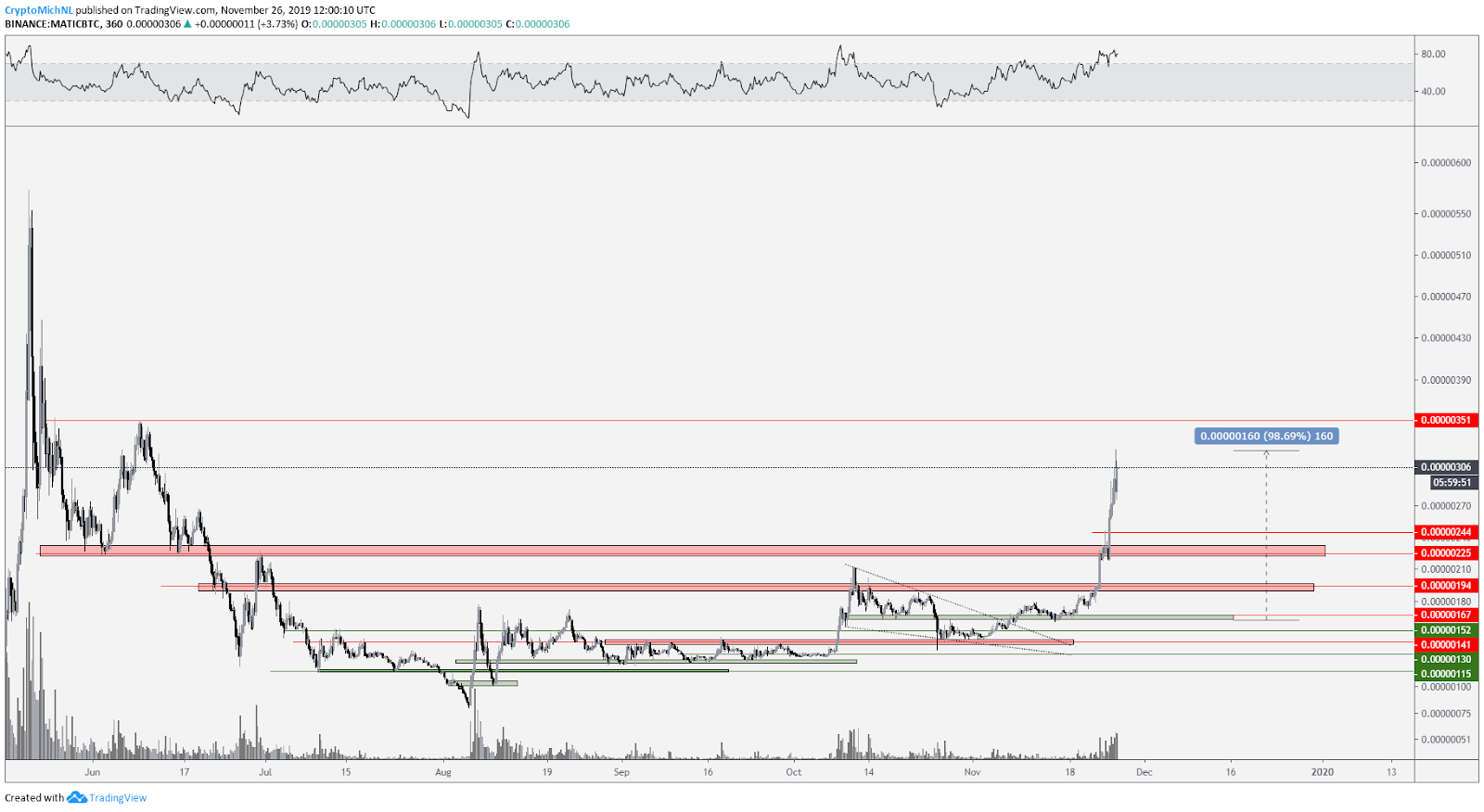 One of these IEO’s is called Matic Network (MATIC), which has been providing some exciting setups during 2019. In the past ten days, the cryptocurrency provided an upwards surge of nearly 100%.

Does it mean that it’s an automatic buy here? No.

Rule number one in trading: never buy an explosive green candle and never FOMO (fear of missing out) after the fact. There’s always a retrace.

Interestingly enough, MATIC broke back into a big range here. 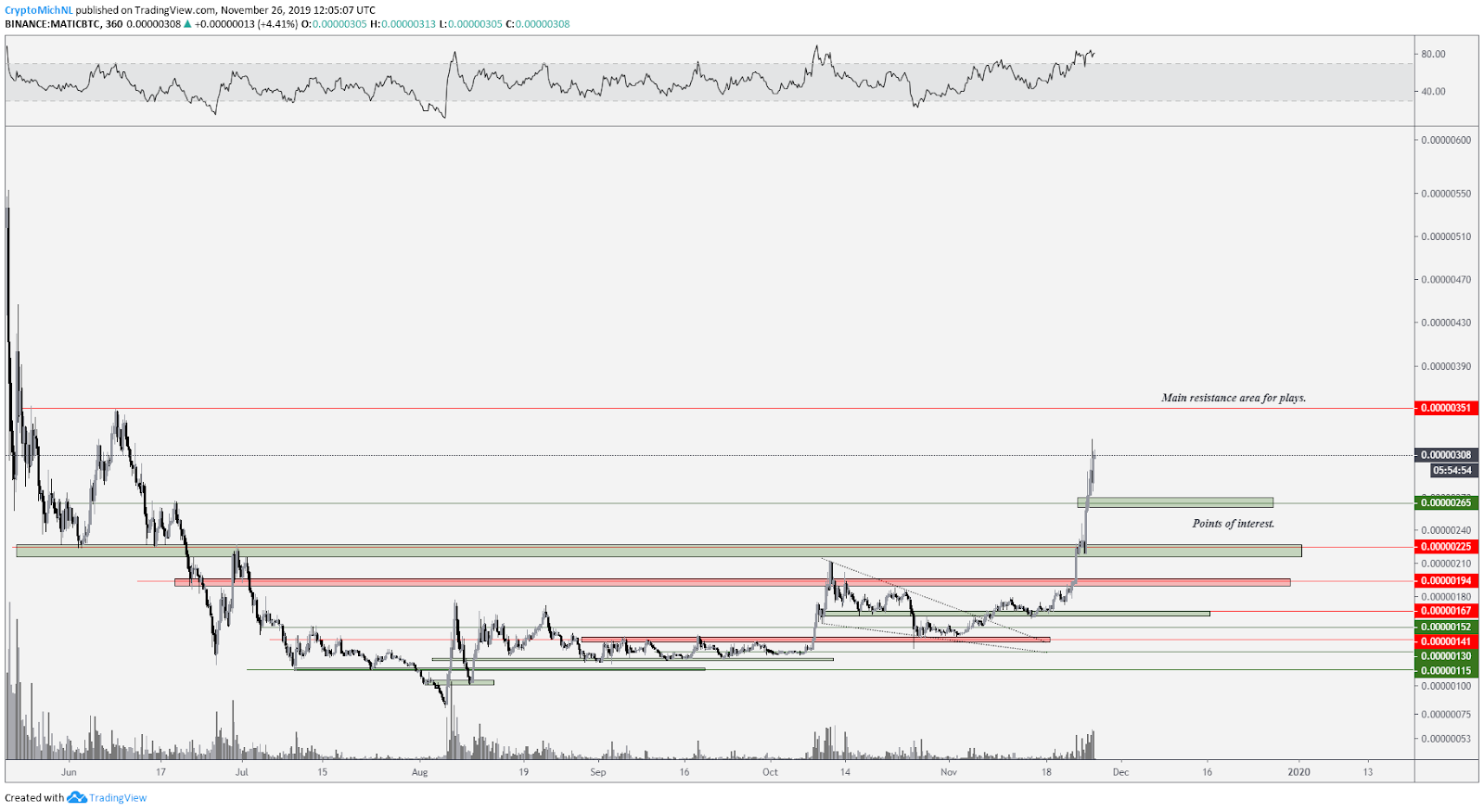 In that regard, defining support and resistance levels can be quite simple. From this perspective, I’d be aiming for a potential long entry at the 265 satoshis zone. If that doesn’t hold, I’m pointing the range low at 220-225 satoshis for a possible entry zone.

What would be the target and resistance from here? The range high is structured through 345-350 satoshis (the red line). 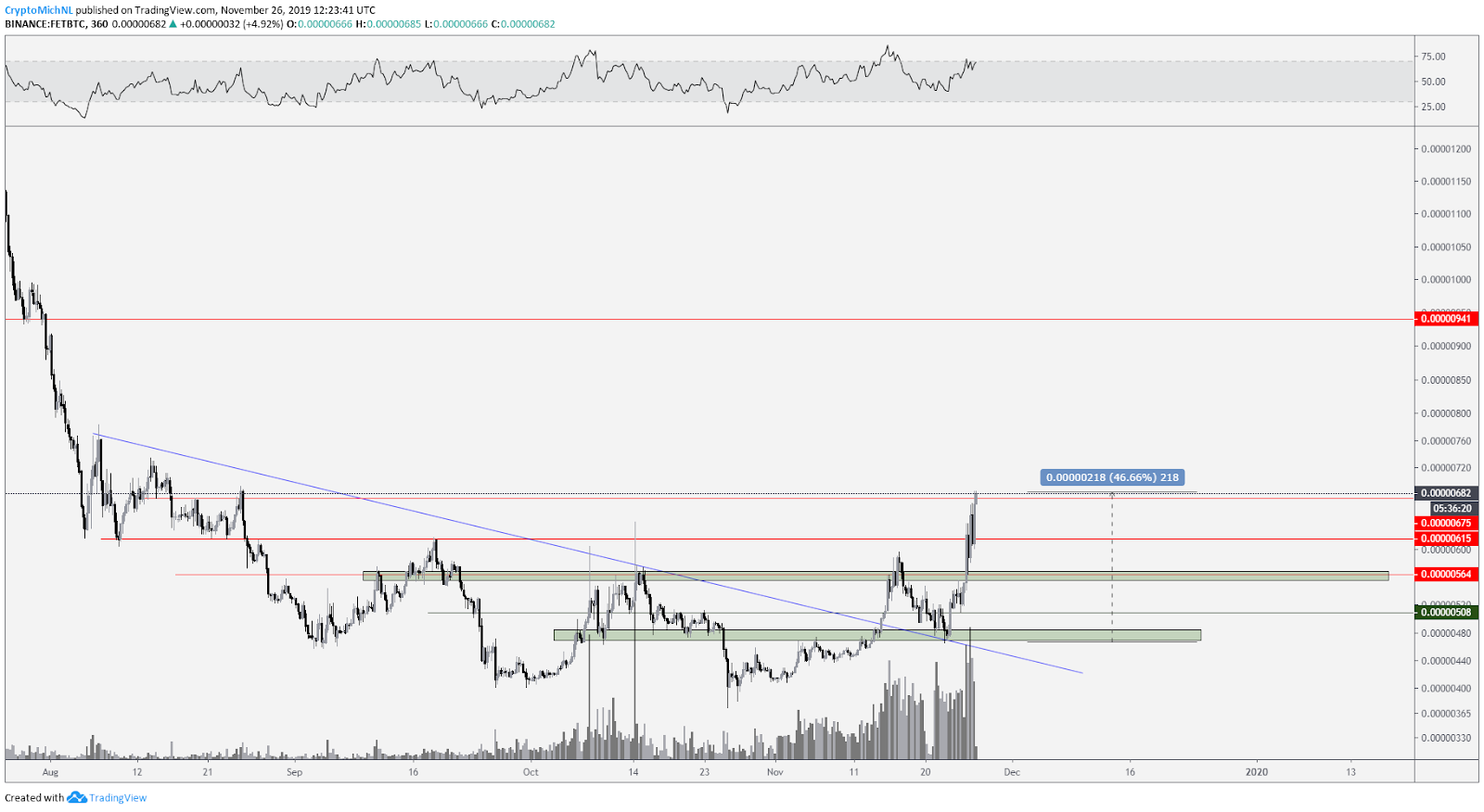 One of the first IEOs was Fetch.AI (FET). But while it has seen a significant dump since the listing, it’s now starting to show signs of a trend reversal on some timeframes as well.

As seen in the chart, the impressive volume is showing up in the last weeks showing indications of interest at this level. A 4-month downtrend was broken upwards, retested and confirmed as support before a 47% surge towards the next resistance area.

I’d be highly interested if we backtest some of the previous resistance levels as support. In that case, I’d be watching 560-570 and 610-620 satoshis levels. I’d also be monitoring if this level can flip into support (685 satoshis zone). 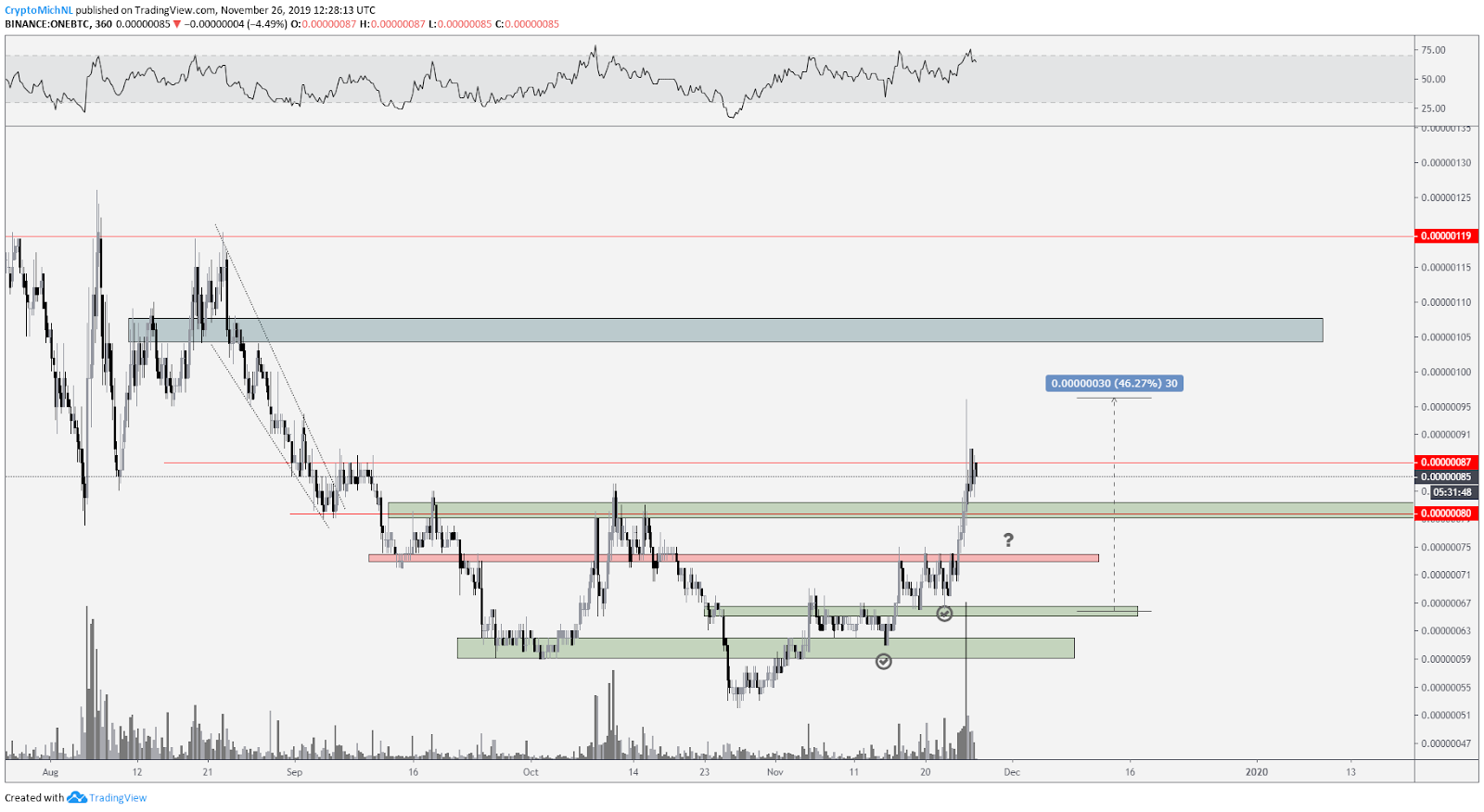 Another IEO, Harmony (ONE), is also showing strength as it surged 47% in the past four days.

Similar signals can be seen with FET as it dumped quite severely after the listing. However, the volume has recently been picking up for ONE and the trend is starting to reverse as we can see in the chart above.

In the green zones, several support/resistance flips are shown in which the trend reversed, resulting in the recent push.

So what is needed right now? I’m expecting to see some backtesting of previous resistance levels for support. In that regard, I’d be aiming to see support at the 80 satoshis level first. If that doesn’t hold, I’d be aiming for 74 satoshis.

If the coin can hold either of the two levels as support, further upwards moves can be expected towards resistance at 105 and possibly 120 satoshis. 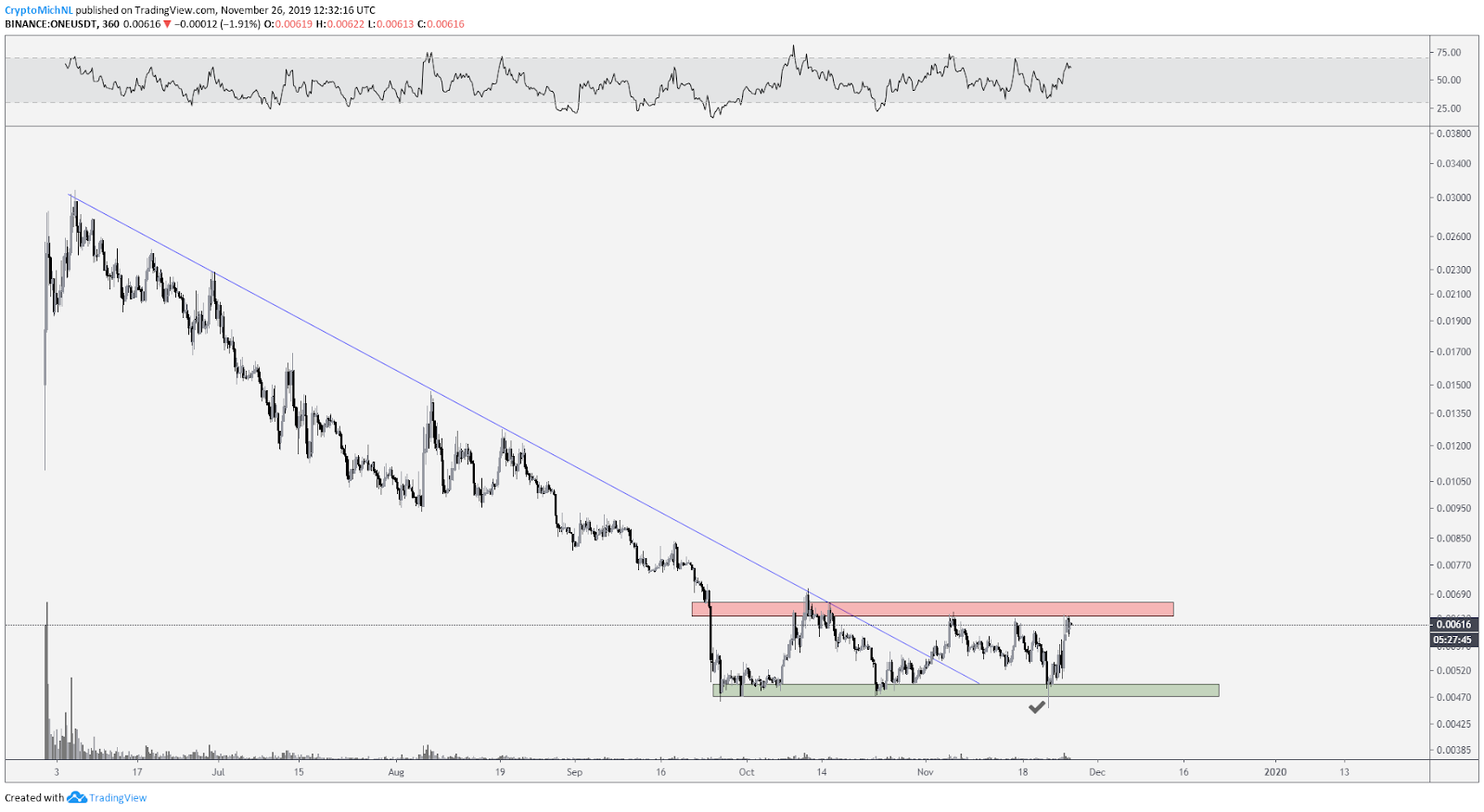 The USDT chart is showing some interesting movement. Harmony has broken its downtrend since listing for the first time. Did it start trending upwards immediately? No, it’s quite reasonable to have an accumulation period first (sideways price action) before a move up.

In that regard, the range is defined through the green ($0.005 area) and red ($0.0065) zones. Breaking the red zone would provide enough space for a potential move towards the next resistance around $0.01.

Elrond shaping up as well? 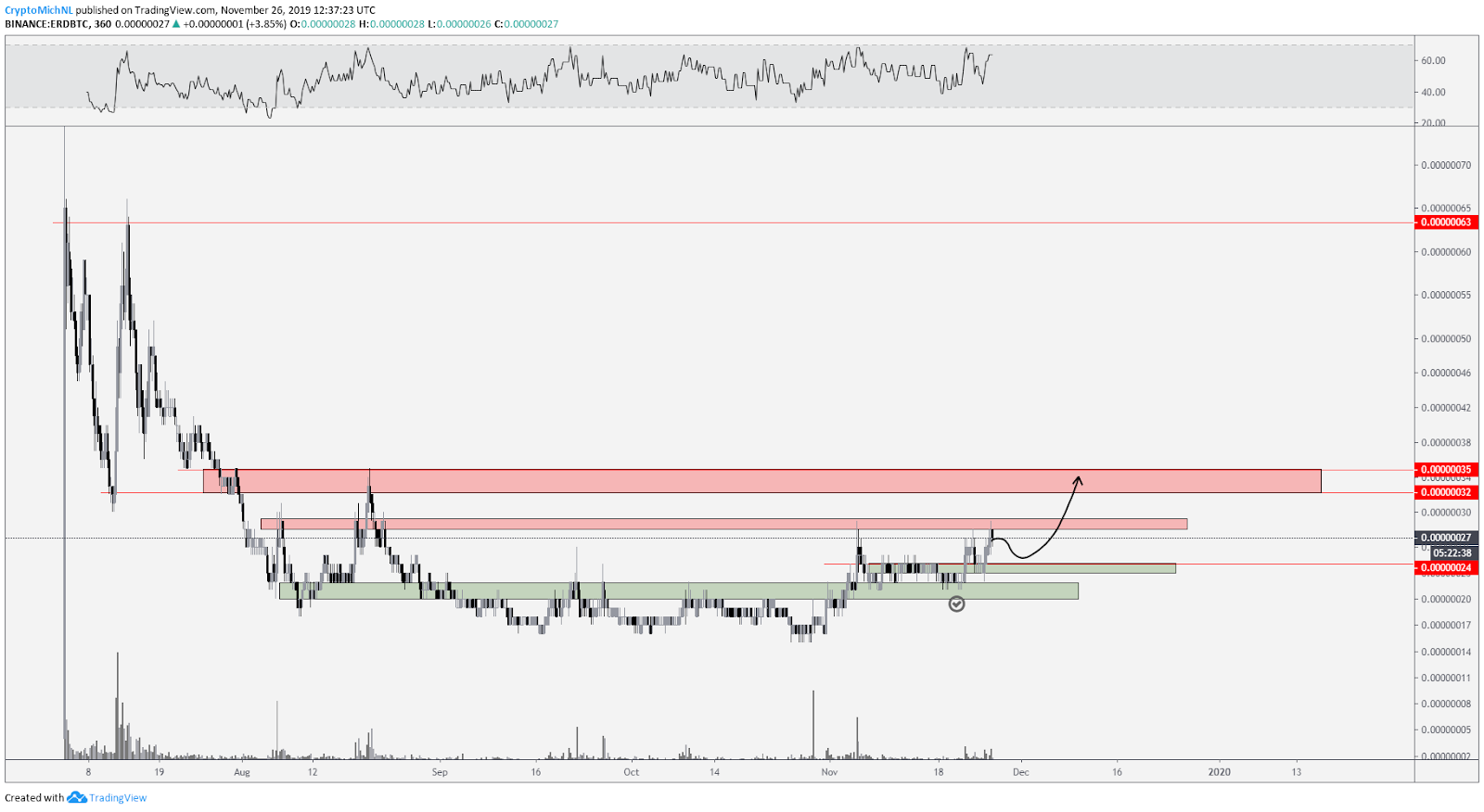 Another IEO, Elrond (ERD), is showing similar signals as ONE. However, it seems to be lagging behind. Interestingly, ONE was showing these support/resistances flips as well prior to surging 47% in a matter of days.

As can be seen in this chart, Elrond starting to present a similar setup suggesting that it might see a similar move upwards.

What does the chart say? It shows that the green zone flipped support after a range-bound period of 4 months.

At this point, a similar movement must occur where the upper green zone at 24 satoshis should become support. If the price can do that, a move towards the 32-35 satoshis level is likely to occur.

It ain’t all sunshine and rainbows, but another IEO is also showing some impressive buying pressure: Band Protocol (BAND). In the past two days, it gained 48%.

This cryptocurrency made a beautiful double bottom structure in the green zone before a big move upwards to the range high. The question is whether this level can be immediately flipped into support or whether a retracement is in order.

As Bitcoin has been showing weakness with the recent move to $6.5K, other altcoins are showing significant movements and potential setups. Time to FOMO? No, always define a proper risk/reward ratio according to your risk management rules.

Nevertheless, the IEOs are providing some exciting setups that could spark a whole new market cycle similar to what ICOs did in 2016/2017.