Binance and Huobi received over 52% of total $2.8 billion in illicit Bitcoin transfers in 2019, according to a new Chainalysis report.

6414 Total views
107 Total shares
Listen to article
0:00
News
Own this piece of history

Binance and Huobi have together received over 52% of total $2.8 billion illicit Bitcoin (BTC) transfers in 2019, according to a new report.

Over the course of 2019, criminal entities moved a total of $2.8 billion in Bitcoin to cryptocurrency exchanges, according to a Jan. 15 study from Chainalysis.

According to the New York-based firm, Binance and Huobi, two of the world’s largest crypto exchanges to date, have received 27.6% and 24.7% of total transfers from criminals in 2019. As such, the two major crypto trading platforms are allegedly responsible for acquiring over a half of all illicit Bitcoin in 2019, while all other exchanges combinedly received 47.8%. 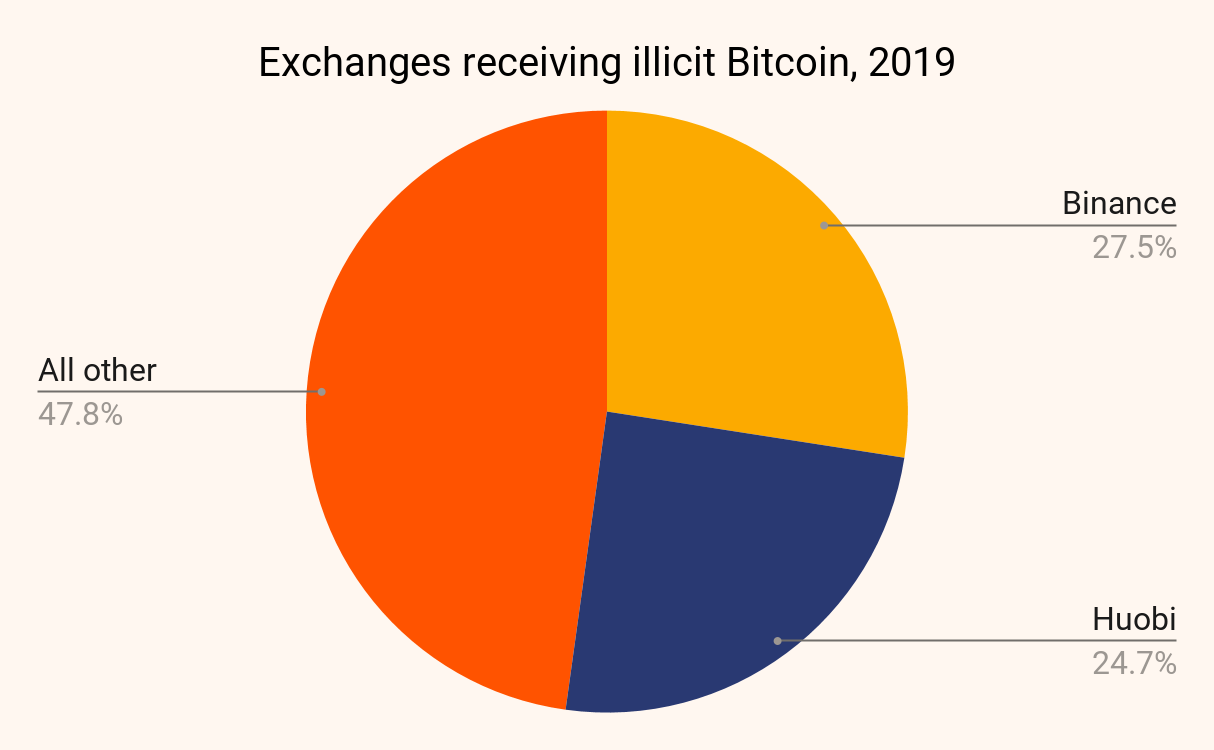 Only 810 accounts out of all 300,000 criminal accounts moved 75% of all illicit BTC transactions

Chainalysis analysts suggested that many of those large illicit accounts likely represent over-the-counter (OTC) brokers. As OTC trading envisions trading deals that happen directly between two traders and without the supervision of exchanges, some OTC brokers may specialize in providing money laundering services to criminals, Chainalysis said.

The company further noted that OTC brokers usually have looser Know Your Customer (KYC) standards than other exchanges, which is attractive for criminals:

“The problem, however, is that while most OTC brokers run a legitimate business, some of them specialize in providing money laundering services to criminals. OTC brokers typically have much lower KYC requirements than the exchanges they operate on. Many of them take advantage of this laxity and help criminals launder and cash out funds, usually first by exchanging Bitcoin and other cryptocurrencies into Tether as a stable intermediary currency before they presumably cash out into fiat.”

Out of the top 100 OTC brokers that allegedly provide money laundering services, as manually identified by Chainalysis, as many as 70 are in the group of Huobi accounts receiving Bitcoin from illicit sources. Dubbed “the Rogue 100,” the list of OTC brokers includes “extremely active traders who have a huge impact on the cryptocurrency ecosystem.

According to Chainalysis, the Rogue 100 received gradually increasing amounts of crypto each month since late 2017, but their activity skyrocketed in 2019. Specifically, those traders received more than $3 billion worth of Bitcoin in 2019, while a substantial number of them were involved in alleged $3 billion Chinese Ponzi scheme PlusToken. The traders in the list allegedly account for as much as 1% of all Bitcoin activity per month.

Speaking to Chainalysis, Binance’s chief compliance officer Samuel Lim reportedly said that the crypto exchange is committed to tackling financial crime in crypto. Lim noted that Binance is compliant with rules and KYC requirements of every jurisdiction they operate in. The exec added that the exchange will continue to expand its own technologies to combat money laundering and other illicit activities facilitated via crypto:

“We will continue to improve on our proprietary KYC and AML technology, as well as the third-party tools and partners we work with, to further strengthen our compliance standards.”

Cointelegraph contacted Huobi exchange to comment on the news but had yet to receive a response as of press time. This article will be updated if new comments come in.