For ICOs, fall 2018 begins with a cloudy September: the bad ‘weather’ which started at the beginning of the summer endures, but there are stable trends as for the localization and industry distribution.

The ICOmeter aims to provide the accurate and concise information about the development of the ICO market in the previous month, and its relation to the all-time statistics. The ICO market data is provided by ICObench, based upon the projects’ announcements recorded in ICObench database, which includes over 4600 ICOs since August 2015.

In the last 12 months, the ICO market has shown a fluctuating trend, reaching two peaks, both for the number of ICOs and total capital raised: in December 2017 and March 2018. Afterwards, the amount of resources gathered by ICOs began to decline, in spite of the temporary recovery in June 2018. Nevertheless, the number of ICOs launched during the last year is above the value of September 2017, with a trend often diverging from capitalization. This movement implies a reduction of the average availability of resources per ICO.

Data collected about ICOs which ended in September 2018 reflects the most recent situation for token issuing and crowdfunding. The general picture is quite gloomy: in spite of some clear ups and some robust trends, as the long awaited recovery of the market still seems to be nowhere in sight. 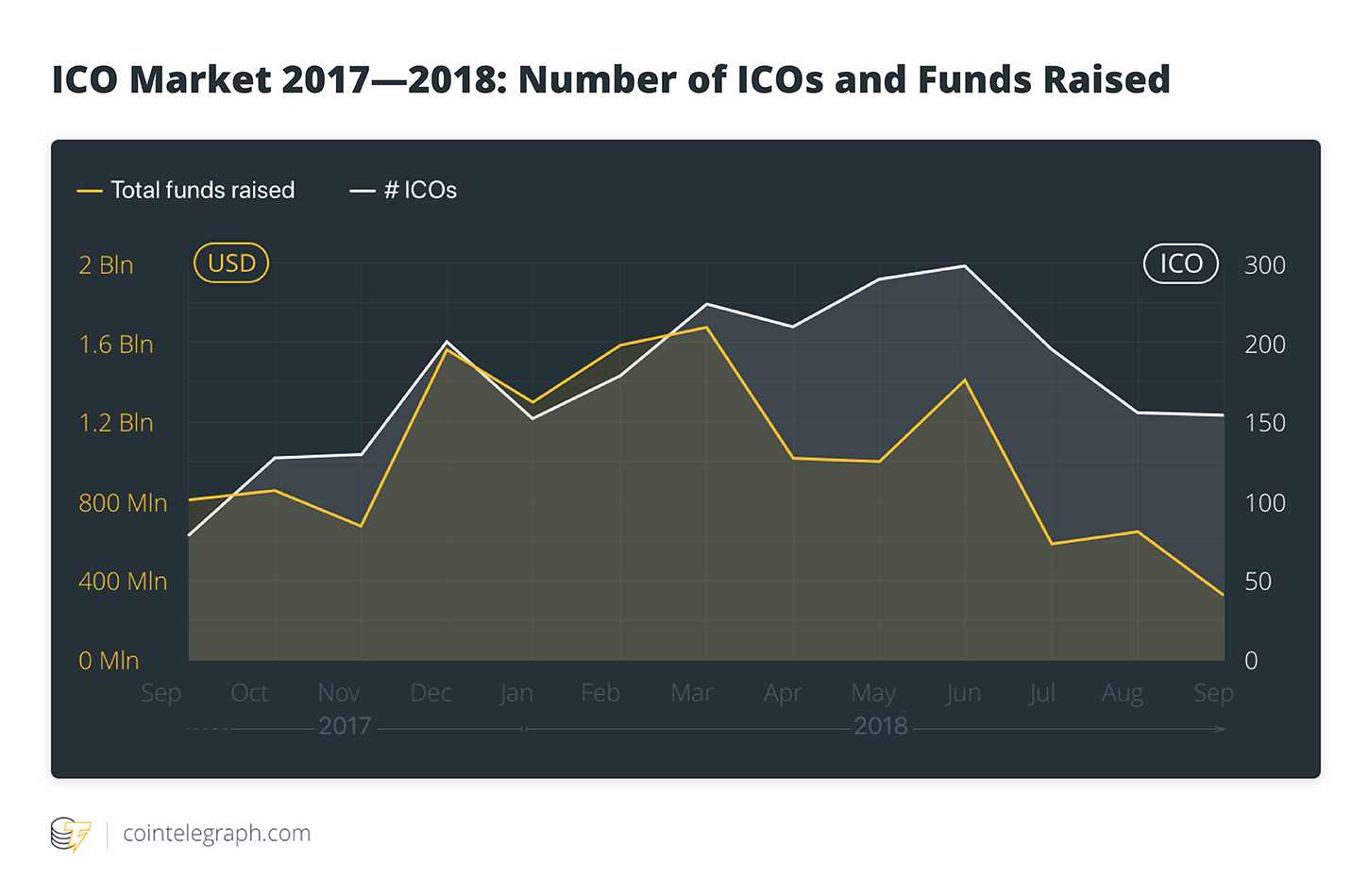 In spite of the recent downturn of the market, businesses operating in the blockchain industry didn’t seem to lose the stimulus to promote new projects, trusting crowdfunding via ICOs as a means to retrieve capital. However, investors’ responses nowadays, are rather more tepid than how they used to be some months ago as could be seen on the graph above.

Considering data references back to September 2018, the variation in the number of ICOs concluded during the last month is slightly above that for August. The value of capital raised by all 155 ICOs ending in September fell by almost $325 million (with a fall of almost 46 percent, compared with the amount recorded in August). In addition to this, some data seems to indicate that promoting a token issuing event at the present time could bring results far from the success standard the market was used to at the end of 2017 - beginning of 2018. In fact, among all the ICOs ending in September, only 41 percent were able to raise at least $1, 24 percent achieved their soft cap, and only 2 percent got past their hard cap finish line.

Ethereum maintains its role as the leading platform for issuing tokens, with a share of almost 90 percent, thus the strong volatility could jeopardize the financial plans of many projects fueled by ICOs.

Considering the value of capital raised by ICOs during the last 12 months, after the peak of over $1.7 billion reached in March 2018, a downward trend has been clear since the end of spring 2018 and – in spite of a temporary recovery at the start of the summer – the tendency seems to have accelerated during the last few months, turning back the clock below September 2017’s values.

Countries and sectors: some stable trends

Although the ICO environment is growing to a slower pace, it seems, at least, quite stable referring to some features, such as its distribution in countries which offer some localization advantage, or its focusing on projects referring to the ‘core industries’ of the blockchain economy. 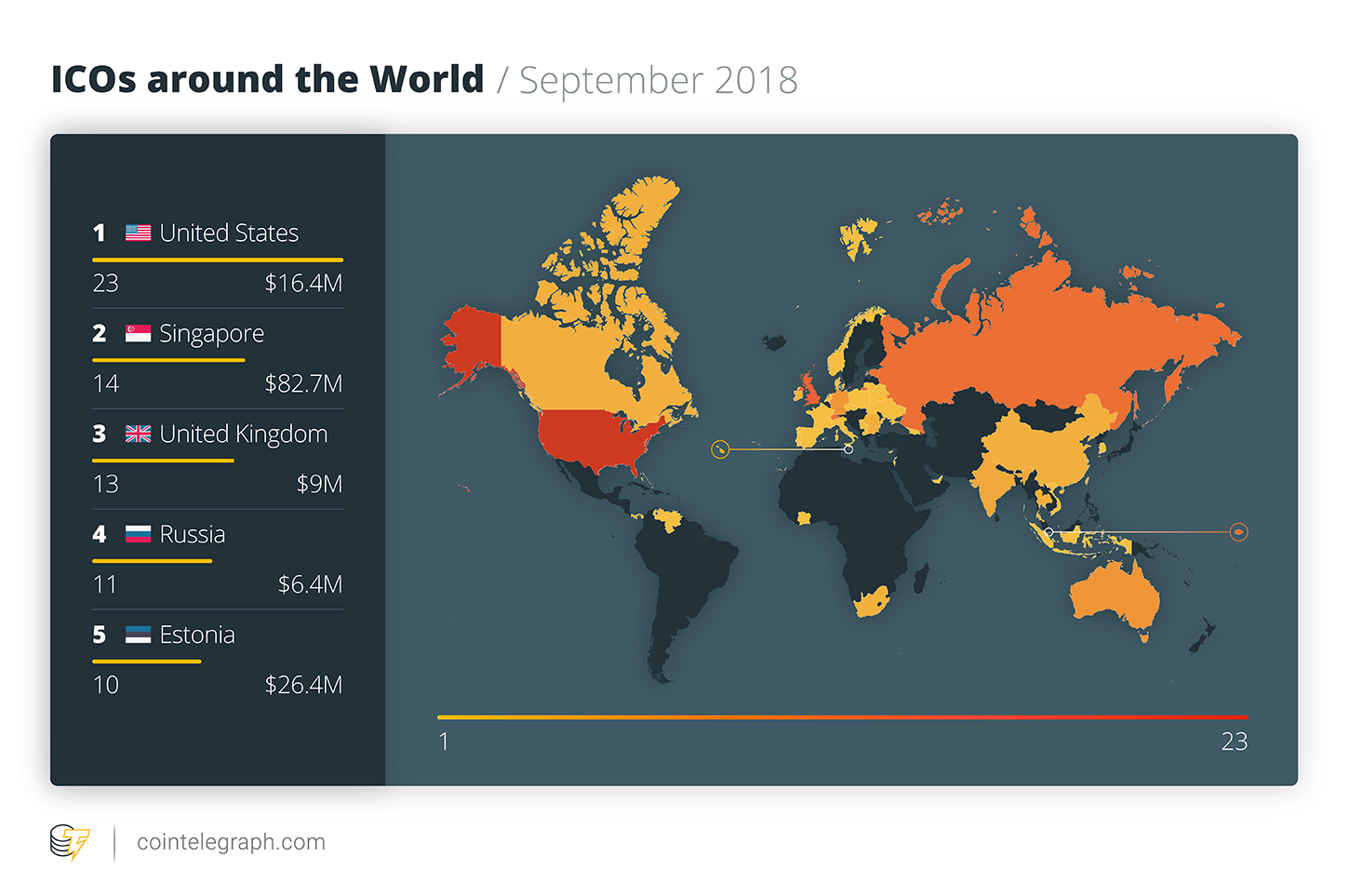 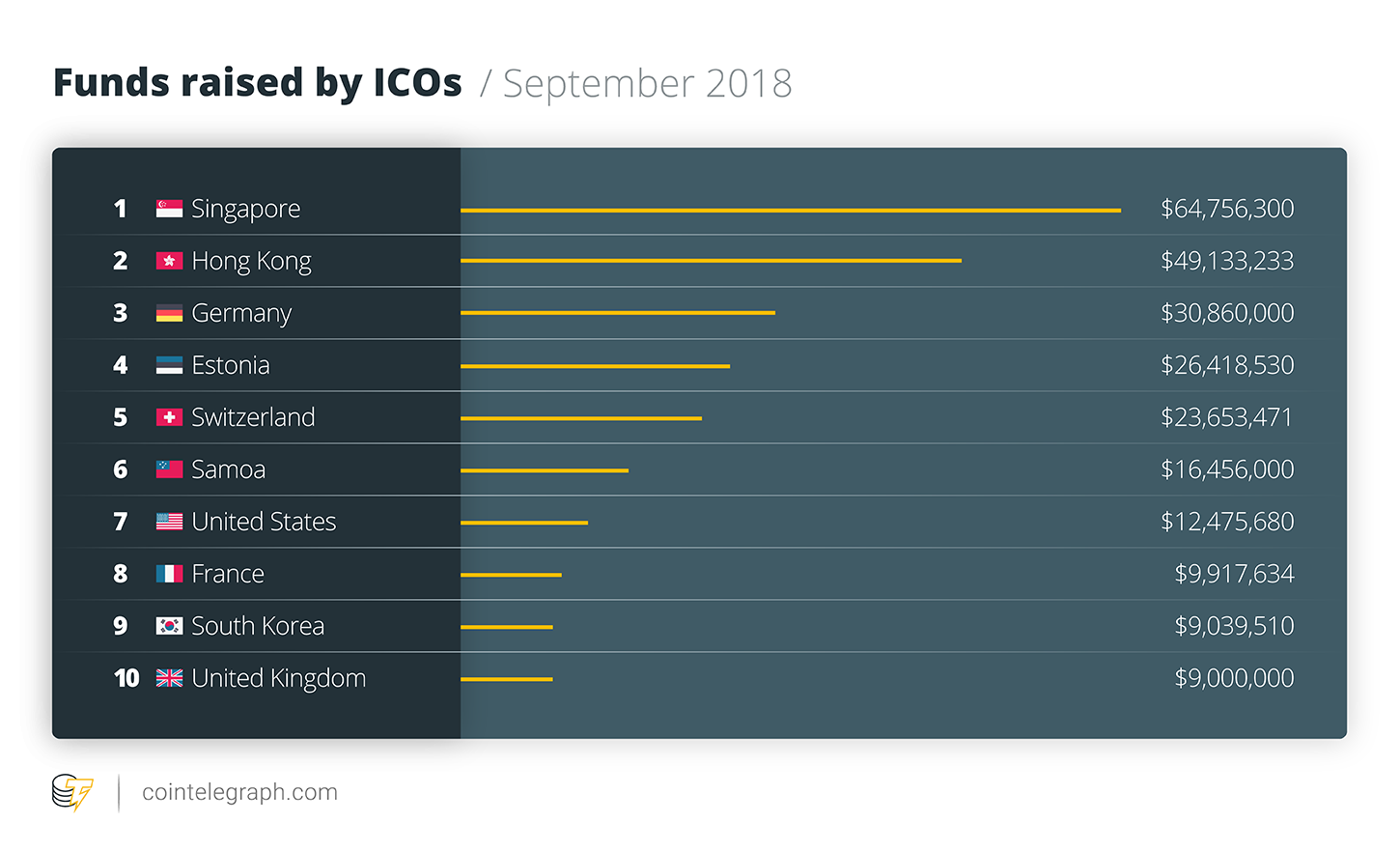 The geographical distribution of projects which completed their funding process during September 2018 seems, in fact, to confirm a longer-lasting trend which identifies a leading group composed of the United States, Singapore, the United Kingdom, Russia, Switzerland, and Estonia, which between them contained the headquarters of about 50 percent of the ICOs concluded since 2015. The U.S., for instance, has maintained its outstanding leadership in the long run, in spite of the severe limitations preventing U.S. citizens from legally investing in any ICOs created, since 2016, by the SEC’s interpretation of the US Security Act of 1933. 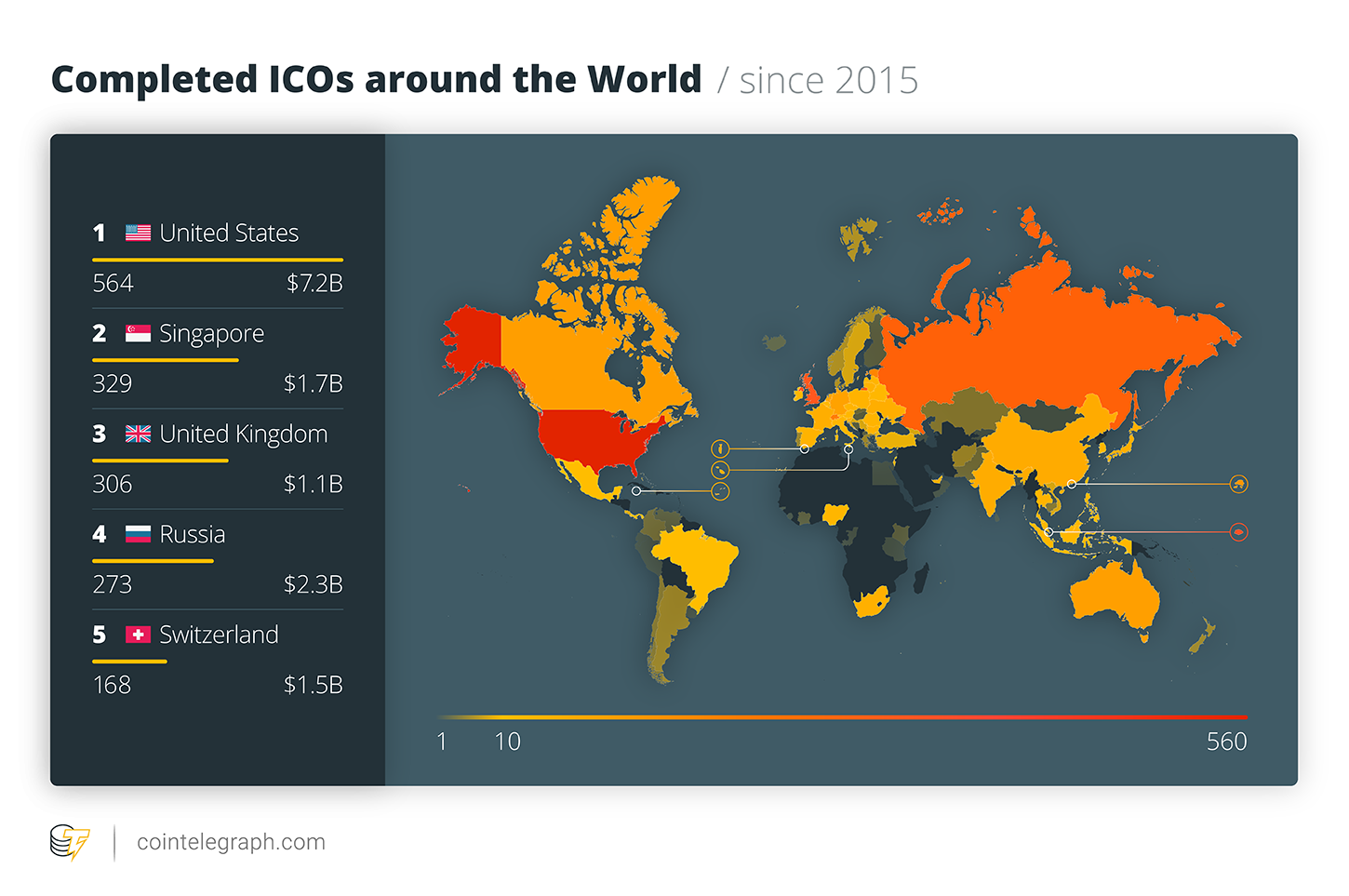 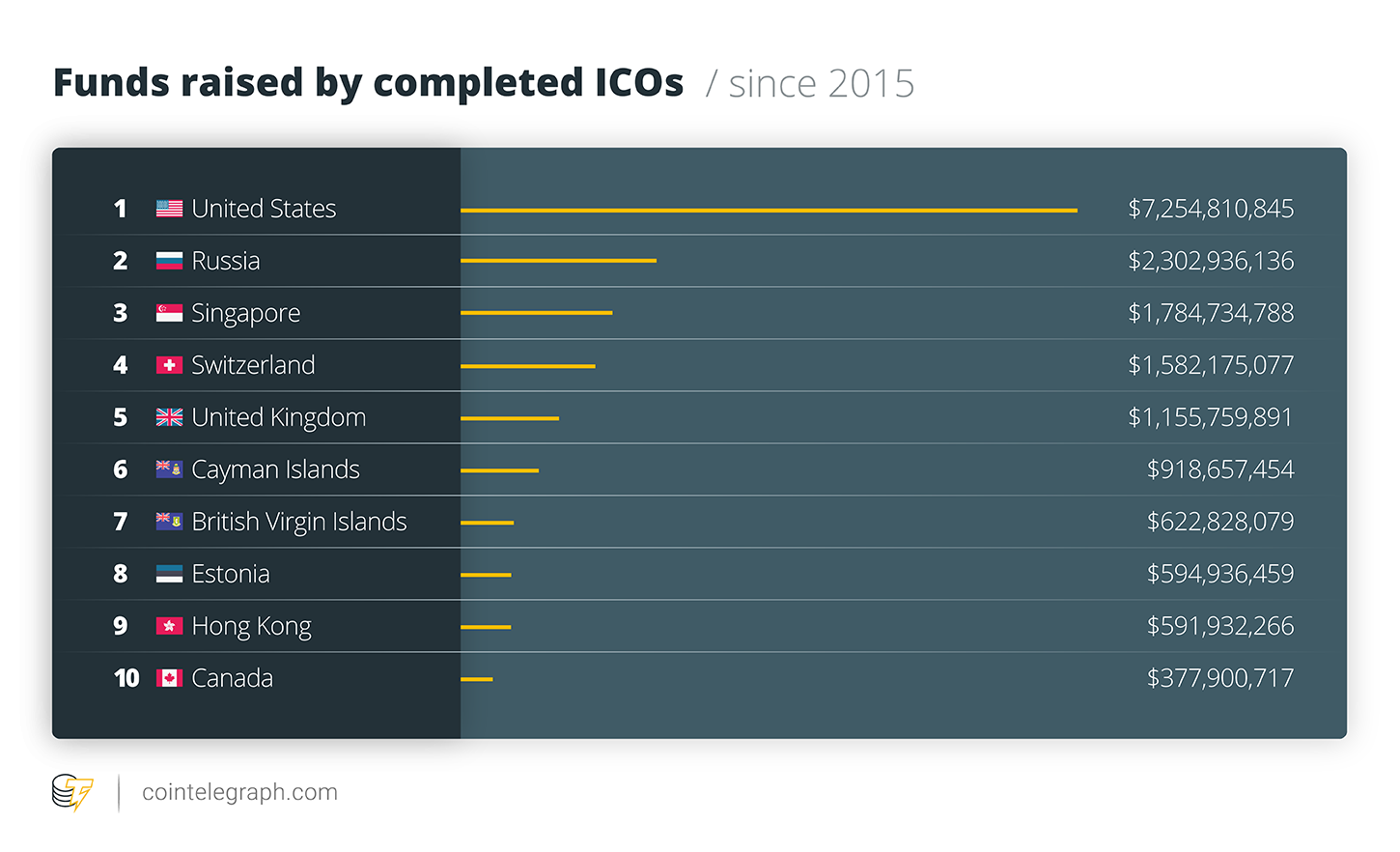 In any case, monthly data needs to be considered carefully: the ranking references the amount of capital collected by ICOs and can vary enormously in the short run, due to the ‘nationality’ of some single ‘out of range’ ICOs, and to the presence of some tax havens attracting a large amount of resources. Also, even if September shows a slightly different ranking, the aggregate data confirms the presence of a strong leading group, distributed among a very small number of centers in North America, Europe, and South-East Asia. 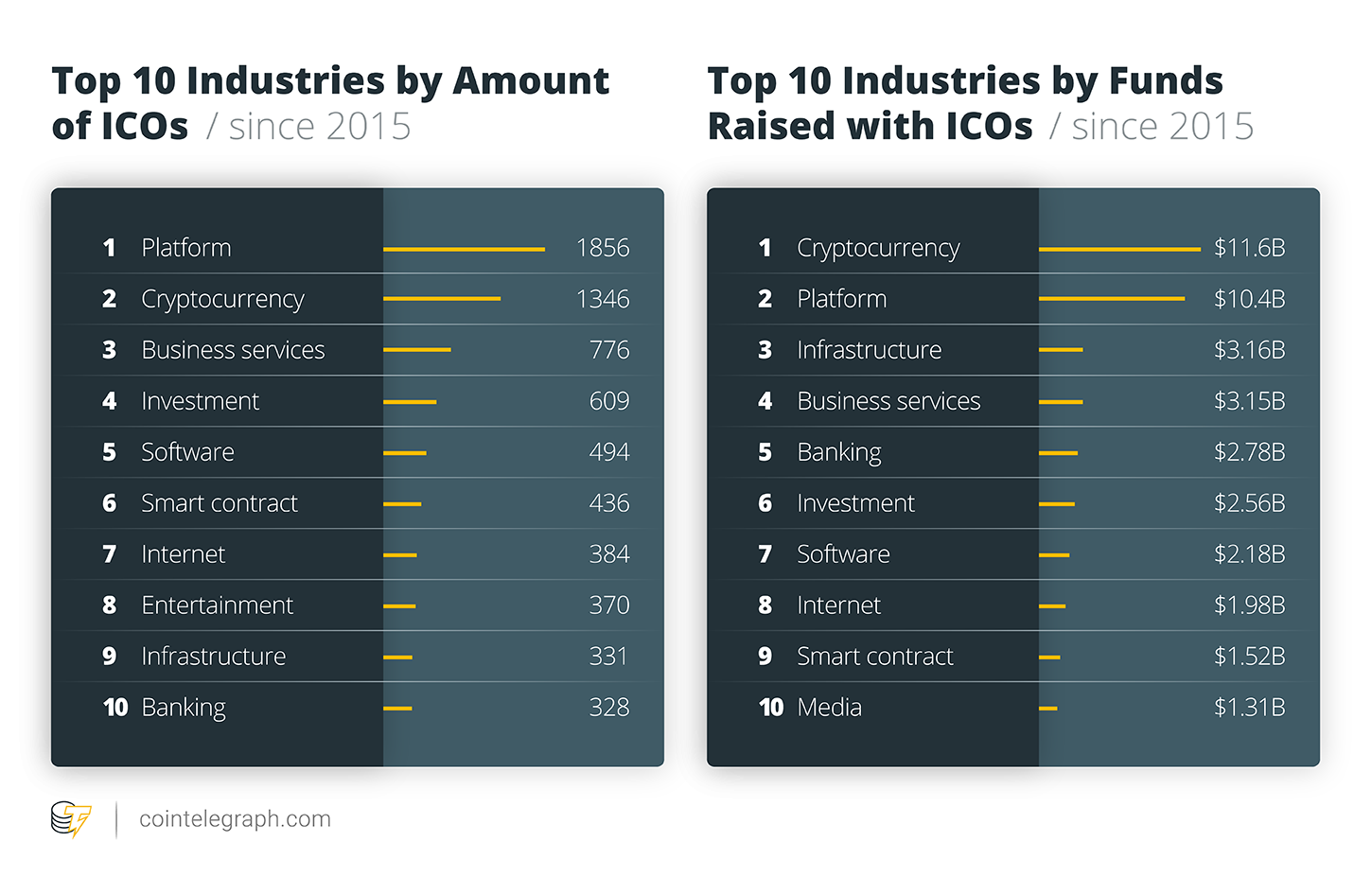 Also in terms of sector composition, September confirms the predominance of some ‘core industries’, which refer to the field of IT and fintech (such as cryptocurrencies or platforms), while projects aimed at applications in sectors further from the crypto economy’s ‘backbone’ (such as charities or tourism) remain a minority. 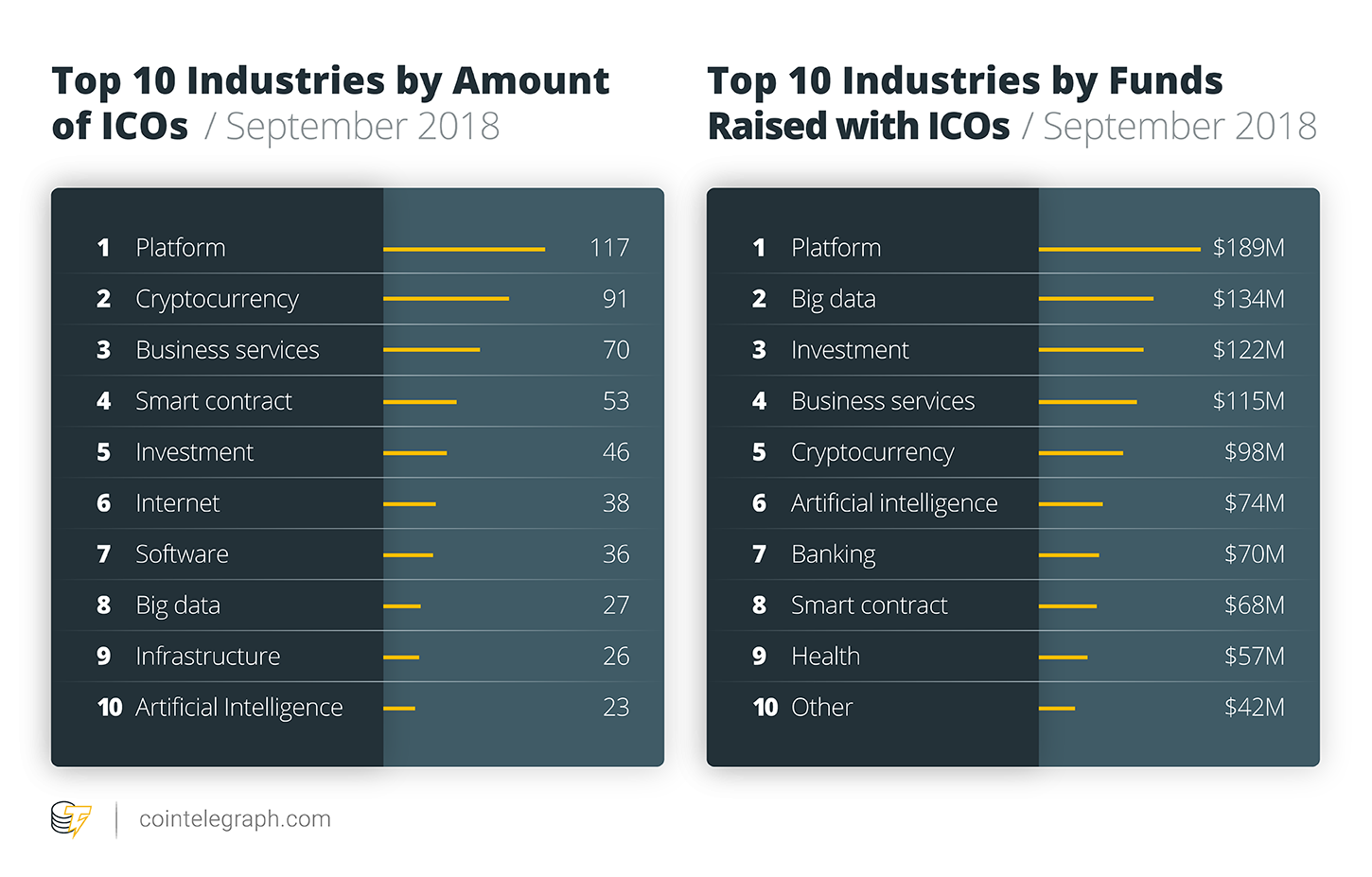 A troubled month, even for the leaders

Even considering data for a relatively short period, usually a rather limited number of large projects mesmerize the market, however the success rate isn’t always directly proportional to the dimensions of the project. In September, the top 5 ICOs, in terms of the amount of capital, raised more than 35 percent of the funds invested in this market compared with the previous month when the concentration was over 57 percent, with two of September’s largest ICOs obtaining almost 22 percent of the available capital.

Nevertheless, none of the top performers were able to achieve its hard cap goal and, among them, the completion rate varied from 78 to 30 percent of the higher goal set. The fact that even projects attracting the larger share of funds raised during the month of September closed their ICO far from hitting their anticipated goals, could be seen as proof of the difficulties affecting all companies which base their funding on ICOs to attract investors generating ‘hype’.

A comparison with the success rates for September 2017 and September 2018 would confirm the concerns about the present market situation: considering the aggregate value of the soft caps indicated by the ICOs that ended a year ago, the goal set was achieved for 95 percent, while the aggregate hard cap was achieved for 29 percent (this data is available, however, only for ICOs which explicitly indicated a hard cap).

One year after the events are quite different: referring to the ICOs that were concluded in September 2018, the two values dropped, the hard cap goal achievements moved to 64 percent, and the soft cap goal fell to seven percent.

Comparing this result to August 2018, it’s possible to see a slight recovery only considering that the minimum amount requested to start a project was achieved by a larger share, as the aggregate soft cap covering rate rose from 44 percent to 64 percent.

The turbulence which engulfed the crypto-assets’ market during the last month didn’t stop the possibility for startups to finance their project through ICOs. In spite of that, it is possible to recognize the continuity of some trends, such as geographical and sector distribution, and this form of crowdfunding remains somehow robust, at least considering the number of ICOs concluded every month. 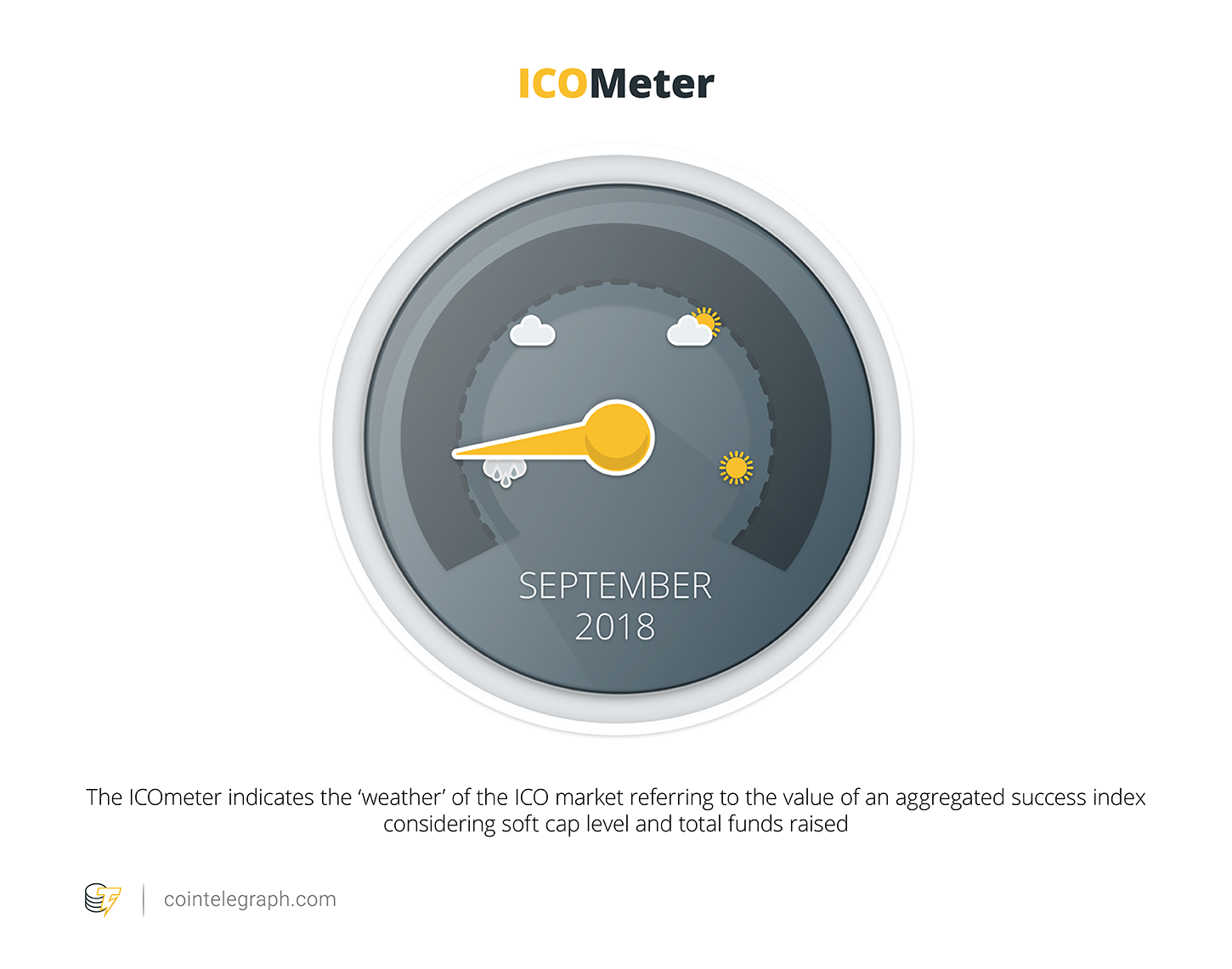