As the wider market slides, Ethereum has plummeted to multi-month lows below $300, although Bitcoin is holding its recent gains.

August 13: Crypto markets have today failed to sustain their short-lived recovery, with Ethereum (ETH) plummeting to a multi-month low below $300 and only a scant few altcoins spared from the widespread losses, as Coin360 data shows. Bitcoin (BTC) is seeing only minor losses on the day.

Ethereum (ETH) is currently trading at $288, down a stark 9.77 percent on the day. Having traded sideways most of the day to hold close to the $320 mark, the top altcoin saw a vertiginous plummet in the two three hours up to press time.

Ethereum’s losses on its daily chart are the most severe among the top ten cryptos on CoinMarketCap’s listings. On the week, the leading altcoin’s losses are over 28 percent, with monthly losses pushing 33 percent.

Ethereum is currently trading at an 9-month price low, hitting below the $300 price point last in early November. 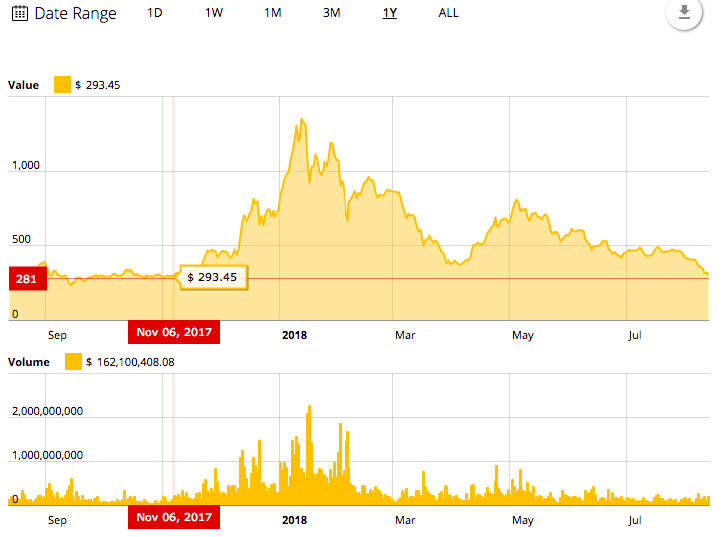 Bloomberg analysts today explained the drop in Ethereum’s price being due to “pressure from ICOs cashing out,” pointing out that Ethereum is the “most popular” platform on which blockchain startups build and raise funds.

Bitcoin (BTC) on the other hand is down a negligible 1.6 percent on the day, trading at around $6,224 at press time, according to Cointelegraph’s Bitcoin price index. During earlier trading hours today, the asset made a fresh attempt at breaking through the $6,500 resistance, but slid downwards, losing around $200 within 6 hours.

While at this granular resolution, Bitcoin’s fluctuations may appear significant, the coin is in fact almost exactly where it was a month ago. Weekly losses however remain at around 9 percent –– just last week on August 7, Bitcoin was trading above the $7,000 mark. 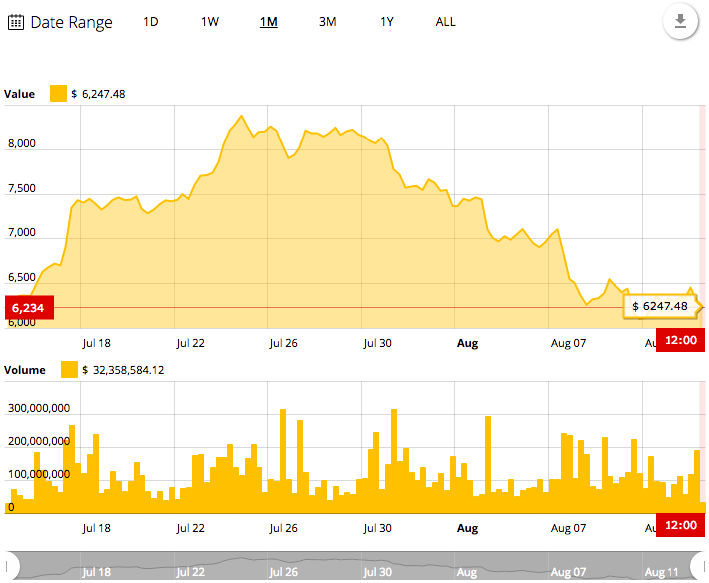 Almost all of the other top ten coins on CoinMarketCap’s listings are seeing significant losses between 4 and 8 percent, with the exception of Stellar (XLM), which is up a solid 2.25 percent to trade at $0.23 at press time. Stellar has now virtually closed its losses on its weekly XLM/USD chart. 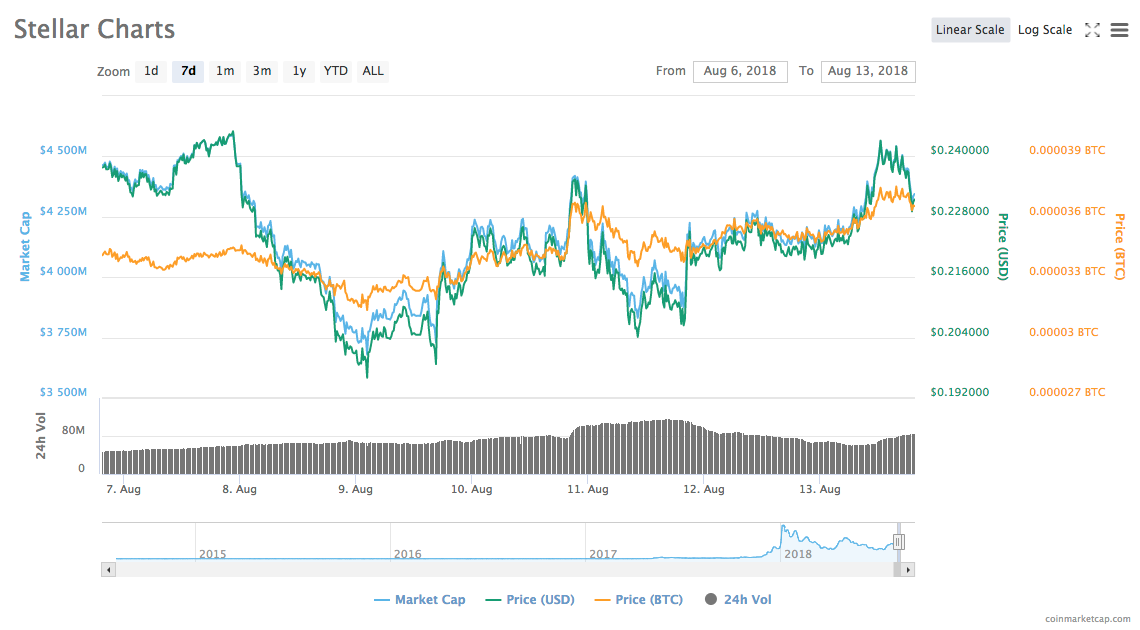 Among the top twenty coins by market cap, IOTA (MIOTA), ranked 12th, has seen as significant losses on the day as Ethereum, down 10.61 percent at press time. The altcoin’s tumble has –– like Ethereum’s –– accelerated in the past few hours up to press time. 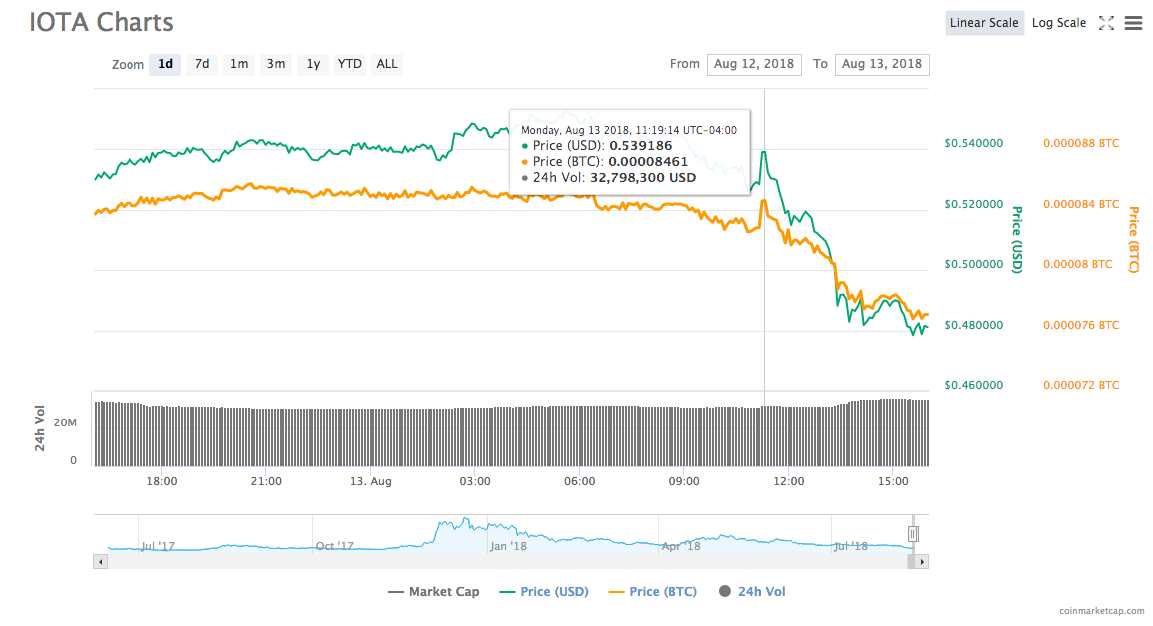 Tezos (XTZ), ranked 18th, has seen something of a bloodbath, plummeting almost 19 percent on the day to trade at $1.23 –– again, losses were intensified in the past few hours before press time.

Bitcoin (BTC) dominance –– or the percentage of total crypto market cap that is Bitcoin’s  –– has broken to a new 2018 record level, soaring on the day to 52.7 percent. BTC dominance has been on the rise as of mid-May. 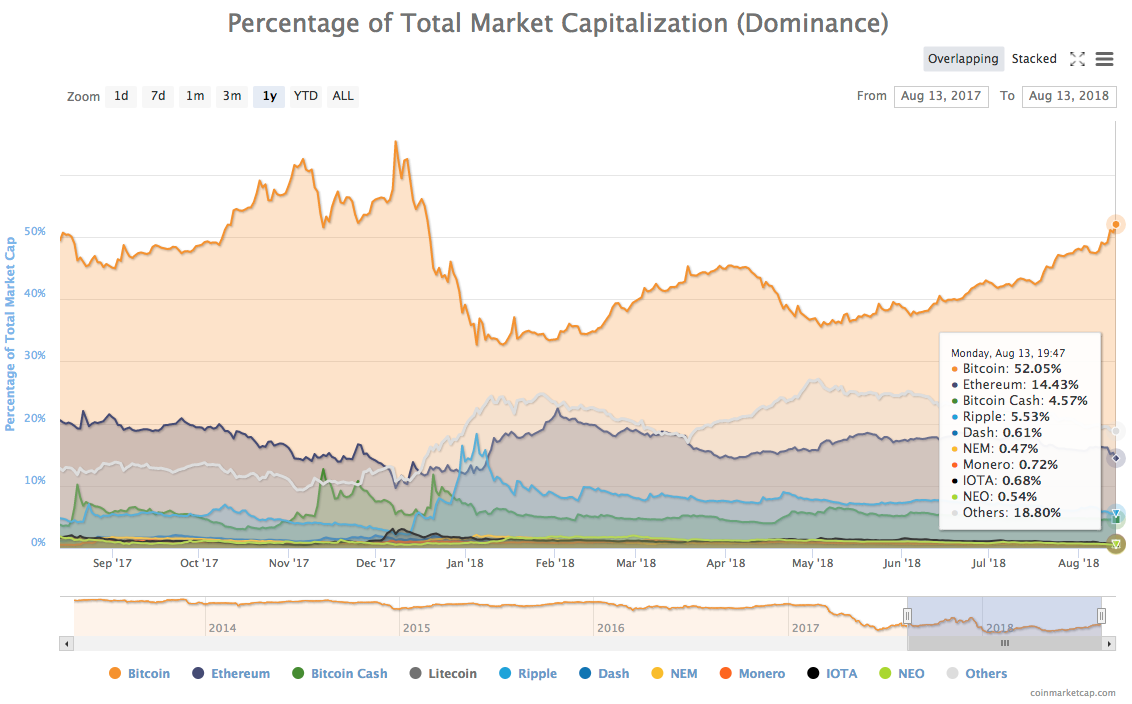 Total market capitalization of all cryptocurrencies is around $205.5 billion at press time, still close to its lowest levels on the three-month chart, which it hit Saturday, August 10, around $207 billion.

With Bitcoin seeing markedly more resilience than other major crypto assets, mainstream media today made a further positive comparison with the mainstream financial sector: in the midst of the unravelling currency crisis in Turkey, Bloomberg today noted that “The 10-day swings in the lira relative to the U.S. dollar now exceed those for Bitcoin amid Turkey’s escalating currency crisis.”

Meanwhile, as an in-depth Cointelegraph analysis suggested today, the entire crypto market has been absorbing the impact of the U.S. Securities and Exchange Commission (SEC) postponing its decision on the listing and trading of a high-profile Bitcoin ETF until late September. The ramifications have apparently dented Bitcoin and suppressed its recent value, but as the market picture suggests, they have also extended to the wider space.