Most top performers of the past seven days are consolidating in a range. At what levels do they become an attractive buy? Let’s look at the charts.

Only a handful of hedge funds have invested large sums of money in the crypto universe. Digital Currency Group, likely the largest, has invested in over 130 crypto-related projects with an average seed round size of $3.24 million. Its subsidiary, Grayscale Investments, which invests directly in cryptocurrencies and digital assets, had $2.7 billion in assets under management according to its Q2 2019 financial report.

According to the 2018 Preqin Global Hedge Fund Report, the size of the hedge fund industry was more than $3.2 trillion. This shows that hedge fund interest in cryptocurrencies is very low compared to other asset classes. Even if a fraction of this money starts to flow into cryptocurrencies, prices can surge.

The physically delivered futures platform Bakkt is scheduled to launch on Sept. 23. Its arrival is expected to increase institutional flow into the asset class. It will be interesting to see whether the launch improves sentiment and provides a much-needed boost to start the next leg of the up-move.

Though Chain Link (Link) only closed marginally in the green, it turned out to be the best performer among major cryptocurrencies in the past seven days. Can it build on its gains if the market recovers or will it also succumb to selling pressure? Let’s analyze the chart.

The LINK/USD pair has been consolidating between $2.0531 and $2.8498 for the past four weeks. This shows that buyers step in to defend $2.0531 and sellers stall the up-move at $2.8498. Trading inside such a tight range can build up energy, which will be released either on a breakout or a breakdown from the range. However, it is difficult to predict which way prices will escape.

If bulls push the price above $2.8498, the pair can retest the lifetime highs. Traders can ride this rally by initiating long positions on a breakout and close (UTC time) above $2.8498. The stop loss for this trade can be kept at $1.95.

Conversely, if the tight range resolves to the downside, bulls might try to hold the price above 20-week EMA, but if this support cracks, the next stop will be at $1.3139, which is the 78.6% Fibonacci retracement of the rally.

UNUS SED LEO (LEO) is the second-best performer of the past seven days. According to its plan to buy and burn LEO tokens using 27% of all accrued margin trading fees, Bitfinex tweeted that it had completed burning of 1750,570 tokens. Can it move up, building on this week’s performance? Let’s find out.

Due to a short trading history, we will analyze the daily chart on the LEO/USD pair. The bears broke below the support of $1.20 on Aug. 16, but could not capitalize on it. Buying at lower levels propelled the price back above $1.20 on Aug. 17. This is a positive sign as it shows that the sentiment is to buy on dips.

The 20-day EMA is flattening out and the RSI has risen to the center, which suggests a balance between buyers and sellers. If bulls can breakout of $1.40, it will increase the probability of a new uptrend that can carry the price to $2. Therefore, traders can initiate long positions on a breakout and close (UTC time) above $1.40 with stops placed at $1.15.

Bitcoin Cash (BCH) turned out to be the third-best performer of the past seven days. Can it build on its strong performance? How does its future look? Let’s analyze the chart.

The BCH/USD pair has been trading inside an ascending channel. The bulls have defended the support line of the channel twice within the past five weeks. This shows that buyers are accumulating the cryptocurrency on dips.

However, if the price fails to sustain the rebound from the support line, it will show a lack of demand at higher levels. The bears will then reverse direction and attempt a breakdown of the neckline of the developing head and shoulders pattern. If the price closes (UTC time) below the neckline, it will complete the bearish pattern, which will be a huge negative.

On the other hand, if bulls push the price above $360, a rally to the resistance line of the channel is likely. Aggressive traders can attempt a trade by initiating a long position if the price sustains above $360 for a day. The first target is $515.35, above which, the pair is likely to pick up momentum. The stop loss for this trade can be kept at $250. As the risk-to-reward ratio is not very attractive, keep the position size at 40% of usual.

The ETC/USD pair has been consolidating in a large range of $3.40 to $10 for the past ten months. Both moving averages are trending down marginally and the price has been trading below it for the past five weeks. The RSI has also dipped into the negative zone, which suggests that bears have the advantage in the near term. This increases the possibility of a fall to $3.40.

However, such a consolidation can sometimes be a sign of accumulation by strong hands. Therefore, traders can buy after the price bounces off the support at $3.40. This provides a low-risk buying opportunity that can offer great returns if the pair breaks out of $10. The first target on a break above $10 is $15 and above it $20. Contrary to our expectation, if bears sink the pair below $3.40, it will start a new downtrend, which will be a bearish sign.

The Bitcoin SV pair has been giving up ground in the past few weeks. The bulls are struggling to sustain the bounce, which shows lack of demand at higher levels. The pair has dipped below the 20-week EMA, which has flattened out and the RSI is also close to the midpoint. This suggests a range-bound action for the next few weeks. Support for the range is at $107 while resistance is at $188.69.

If bears sink the cryptocurrency below $107, the pair will become negative and can drop to $92.933, which is the 78.6% Fibonacci retracement level of the rally. On the other hand, a breakout of $188.69 can propel it toward lifetime highs.

The best place to buy in a range-bound market is close to the support of the range or on a breakout of the range. Until then, we suggest traders remain neutral on the digital currency.

OKB’s performance has been supported by strong fundamentals. Hence, the pullbacks have been shallow, which show that investors are not willing to dump their positions and fresh investment enters even on minor dips. This outperformance has taken place even when the altcoin sentiment has been hugely negative.

The OKB Buy-Back & Burn Program is an attractive incentive for the long-term holders of the token. Migration of the token from the ERC-20 protocol to the OKChain mainnet in the future will also be a huge positive.

Following a new plan for OKB supporters, trading fees for VIP users will be determined only by trading volume, unlike the normal user for whom fees will be based on trading volume and OKB holdings.

Currently, OKB’s 24-hour volume is just over $92 million. Will the rally in the token continue or is it ripe for a correction? Let’s analyze the chart to find out. 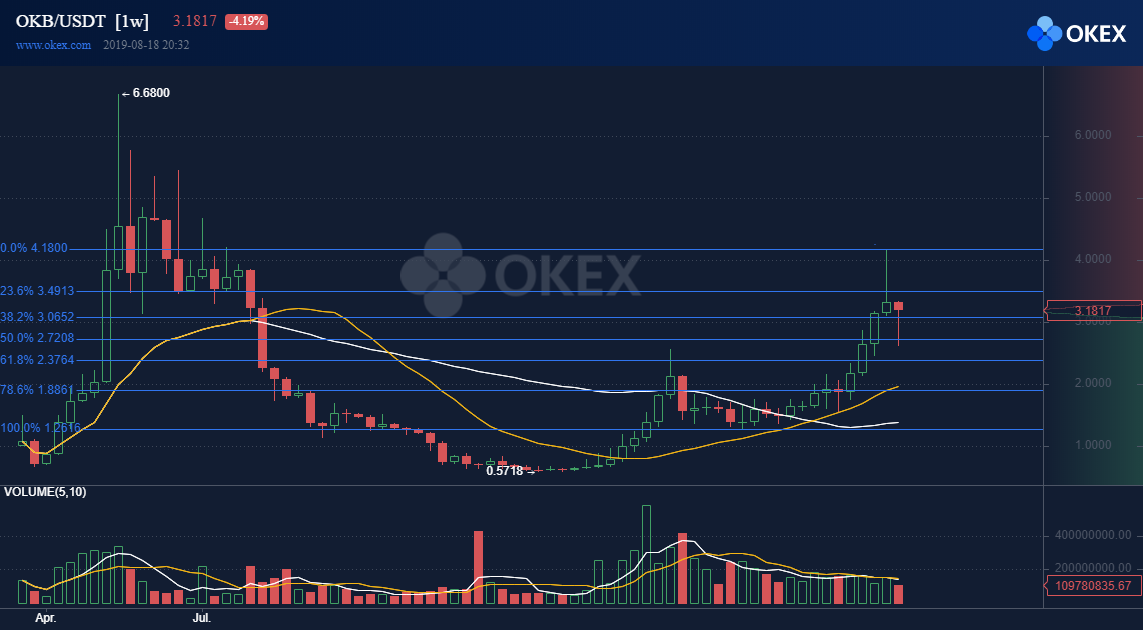 OKB has formed a higher highs and higher lows pattern since the start of the year, which confirms that it is in an uptrend. When the uptrend is strong, pullbacks are shallow. During its latest pullback, it found support at $2.605, which is just below the 50% retracement of the latest leg of the rally from $1.2616 to $4.18. This is a positive sign and shows strong demand on dips.

The 20-week EMA is sloping up and the 50-week SMA has also started to turn up, which is a positive sign. A breakout of $4.18 will extend the uptrend and can carry the price to the lifetime highs of $6.68.

However, if the bears defend the overhead resistance at $4.18, the cryptocurrency can remain range-bound for a few weeks. It will lose momentum only if it drops and sustains below $2.3764, which is the 61.8% Fibonacci retracement of the recent rally.

*Disclaimer: OKB is a featured cryptocurrency from one of Cointelegraph’s sponsors, and its inclusion did not affect this price analysis.

Market data is provided by the HitBTC exchange.