While Bitcoin’s range-bound action is likely to extend for a few more days, select altcoins continue to show promise.

Bitcoin’s (BTC) tight range has put analysts in a fix, meaning, every bit of data is being analyzed to determine the direction of the impending breakout. Bitcoin options open interest data can provide some clues on what the larger investors are expecting but there are many other factors at play that could influence Bitcoin’s spot price.

Currently, the maximum open interest buildup in calls is at the $11,000 strike price and in puts at the $8,000 strike price. This suggests that the writers of these options do not believe that these levels are likely to be breached by expiry.

This suggests that the number of options buyers who believe that the price of top-ranked cryptocurrency on CoinMarketCap will not break below $9,000 is more than traders who do not expect the price to rise above $9,500, which is a mild positive.

BTC options data largely supports the view that the price could remain range-bound until the expiry. However, in case the price breaks out with force, options sellers will be forced to cover their positions and this could add fuel to Bitcoin’s price action.

The range in Bitcoin (BTC) has tightened in the past few days, which suggests that both the bulls and the bears are waiting on the sidelines for a trending move to start before jumping in to initiate a position. 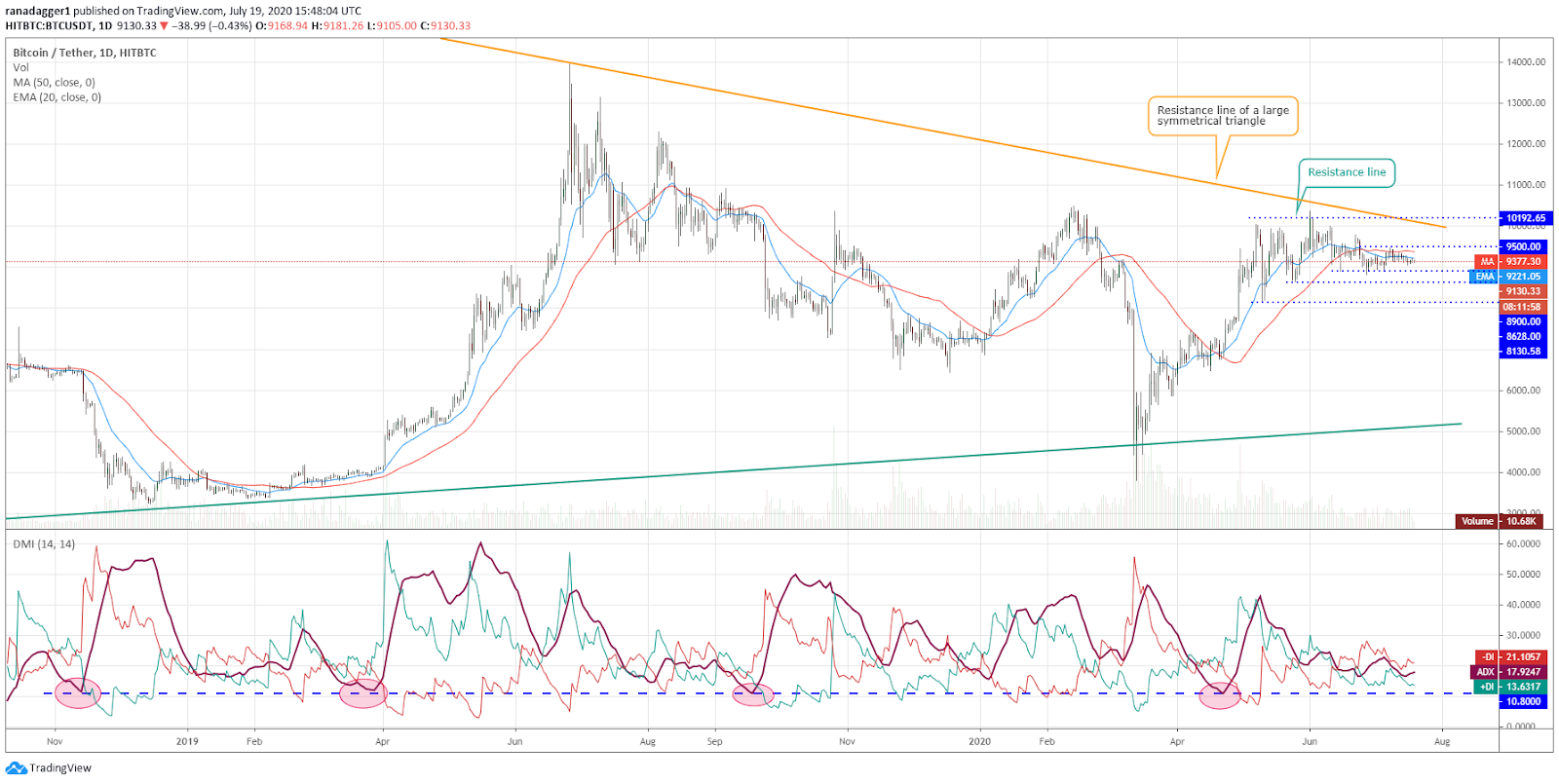 While the range-bound action has been talked about for many days, the biggest question is which way the breakout will happen. The directional movement index (DMI) indicator can be used to identify whether the bulls or the bears have the upper hand.

Along with it, the average directional movement index (ADX) can be used to see when the trend is likely to pick up steam.

In the BTC/USD pair, history suggests that the ADX starts a strong trending move when it is close to 10.80 levels (marked as ellipses on the chart). Currently, the ADX is at 17.92, which suggests that the range-bound action might continue for a few more days and the ADX can drop further before the price breaks out decisively.

The -DI (colored red) is currently dominant as it is on top and the +DI (colored green) is at the bottom, which suggests that the bears have a slight edge over the bulls.

There are two critical things for traders to watch is the ADX level as it will indicate a possible sustained trend above 25 and the dominant DI. 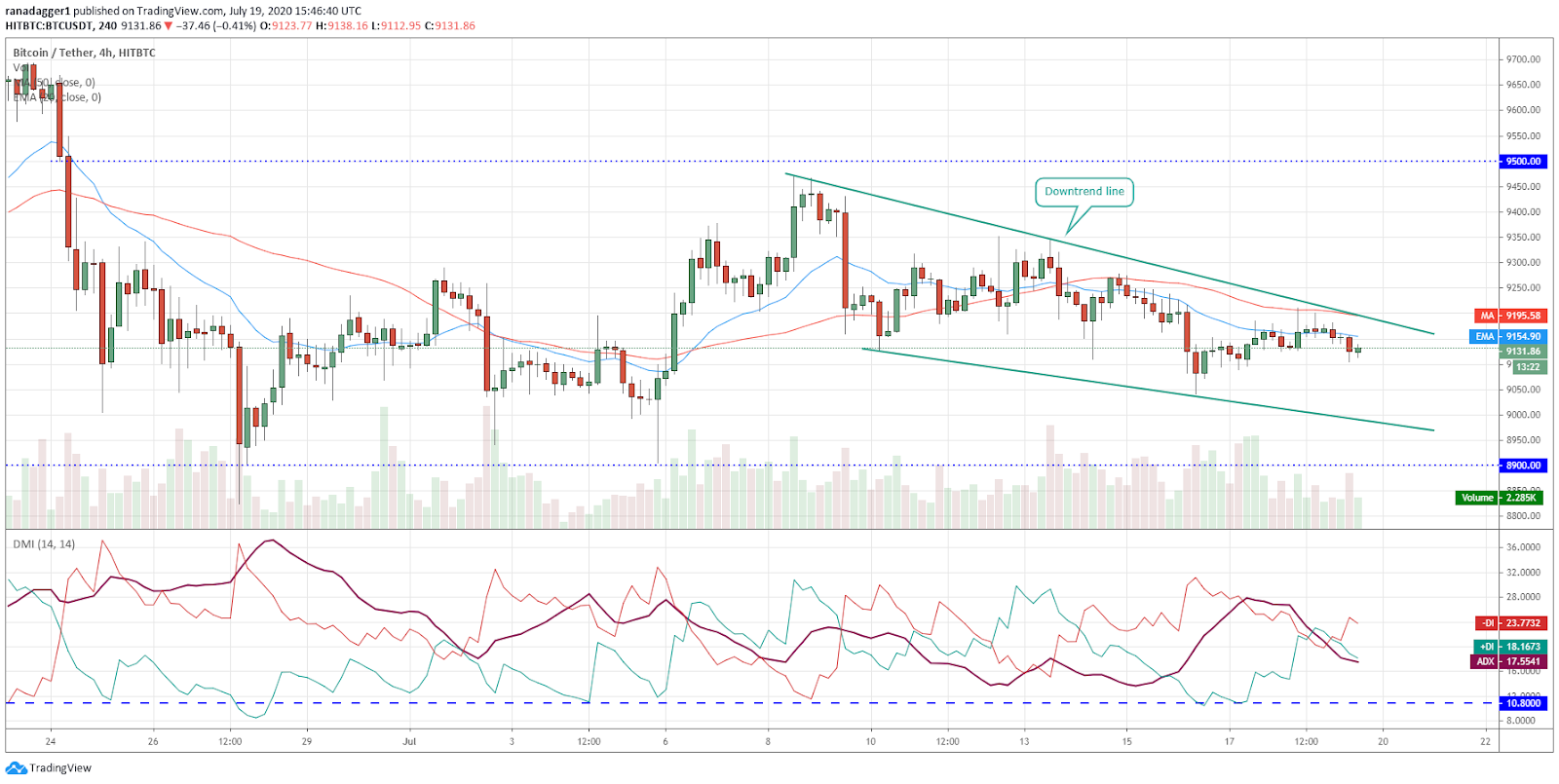 The price is trading below both moving averages and the downtrend line, suggesting that bears have a slight edge. The immediate support on the downside is at $9,089.17 and below that at $9,040.48.

If these supports crack, the bears will try to break below the psychological level of $9,000 and challenge the support at $8,900.

If the price turns up and breaks out of the downtrend line, it will suggest accumulation by the bulls and could result in a move to $9,345.05 and possibly $9,500.

Cardano (ADA) is in a strong uptrend with the ADX above 40. The altcoin has currently formed a symmetrical triangle, which mostly acts as a continuation pattern with the price generally breaking out in the direction of the prevailing trend. 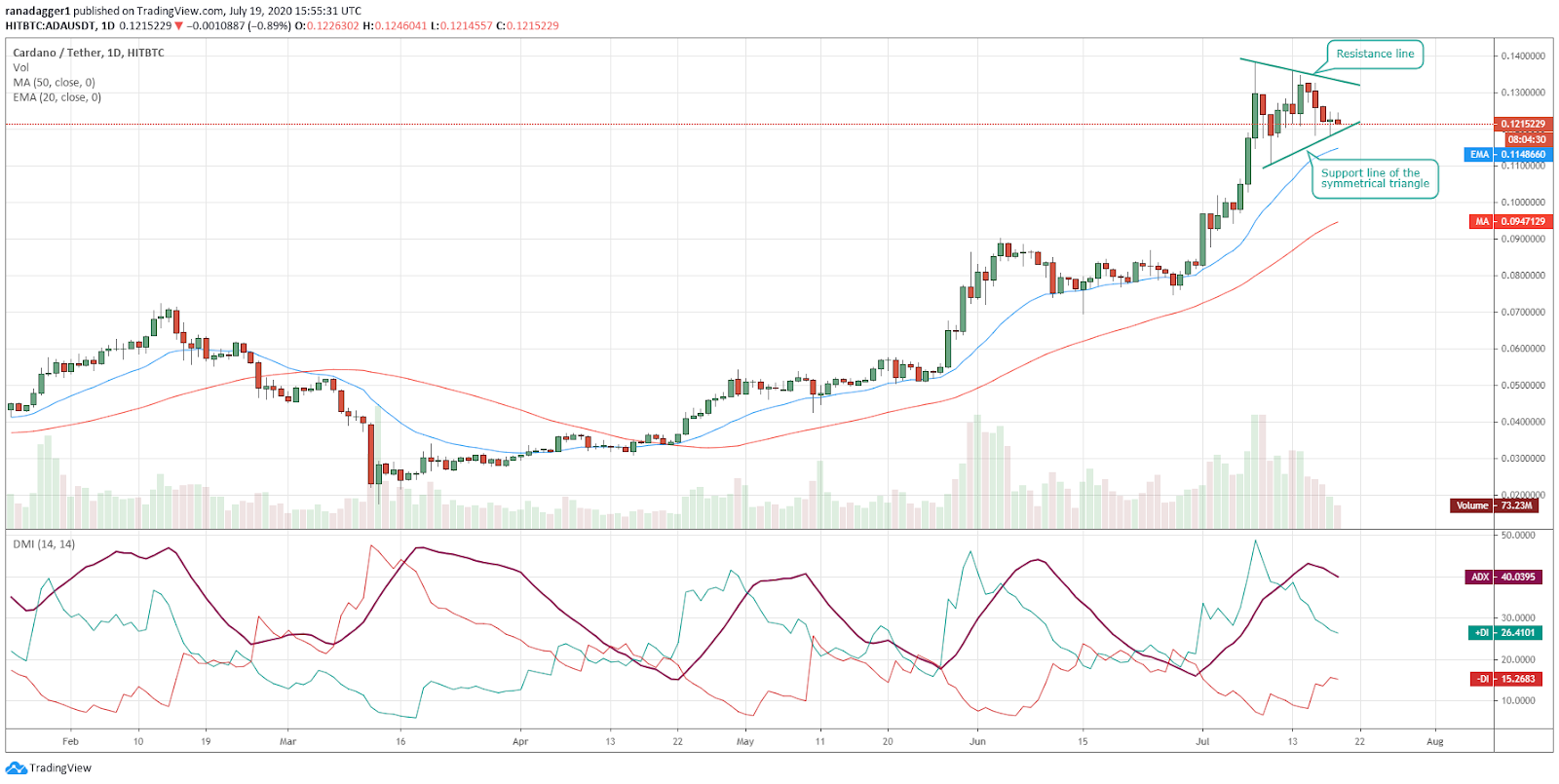 The uptrend will resume after the bulls push the price above the symmetrical triangle and the recent high at $0.1380977. Above this level, the sixth-ranked cryptocurrency on CoinMarketCap can rally to $0.173 and then to $0.20.

Contrary to this assumption, if the bears sink the price below the triangle, the 20-day exponential moving average ($0.114) is likely to act as a strong support but if it cracks, a deeper correction to the 50-day simple moving average ($0.094) is possible. 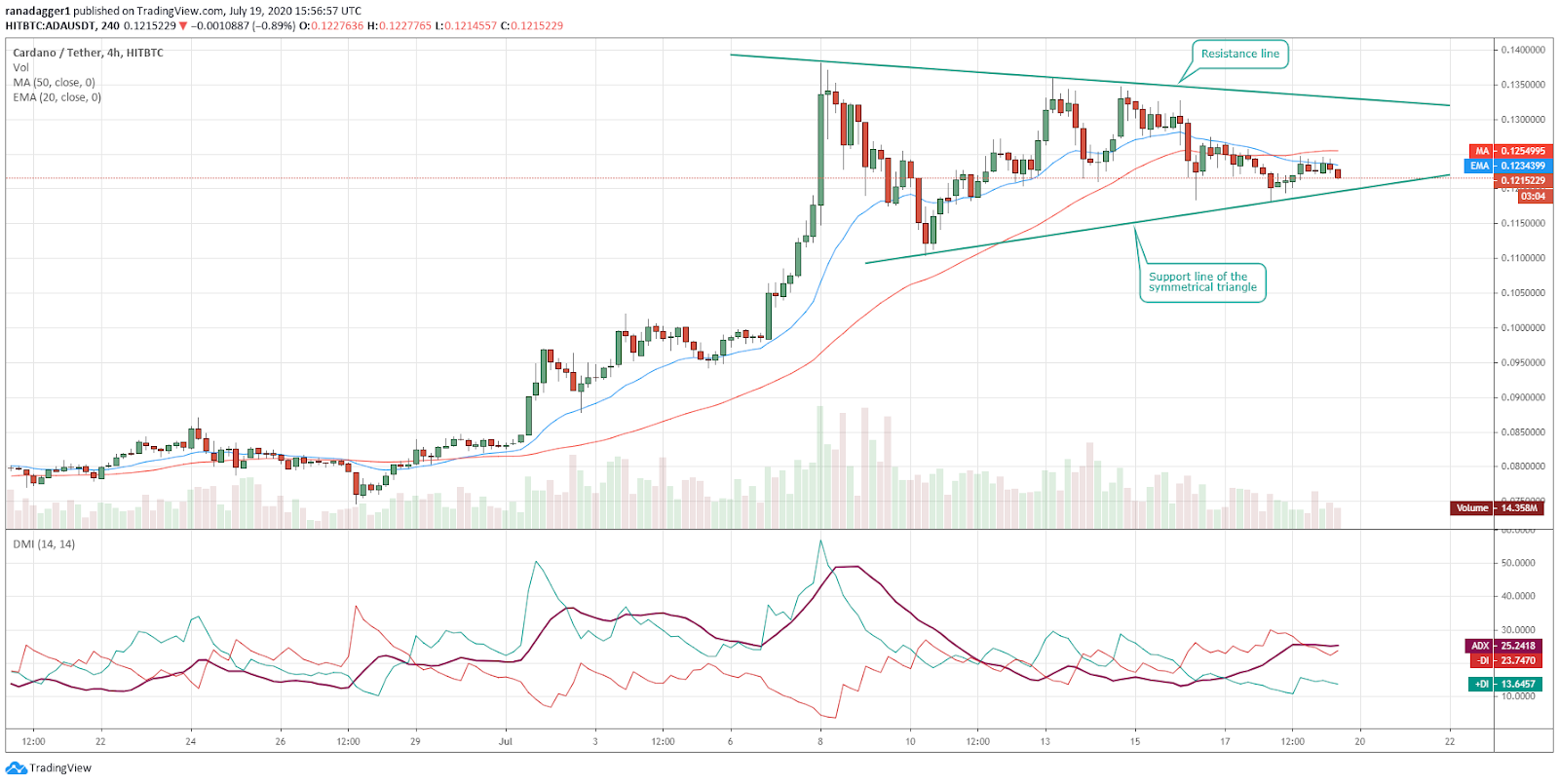 The ADA/USD pair is currently below both moving averages and the -DI has become dominant, which suggests that the bears are attempting to make a comeback in the short-term.

A break below the triangle will be a negative sign as it could result in profit booking by the short-term traders. There is a minor support at $0.11 but if this support cracks, a deeper correction is possible. Hence, bottom fishing can be avoided if the price sustains below the triangle.

A breakout and close (UTC time) above the triangle is likely to resume the uptrend and could be an opportunity for the traders to consider long positions.

Chainlink (LINK) is in a strong uptrend with the ADX above the 54 level. However, after the sharp up move of the past few days, the altcoin is currently witnessing profit booking. 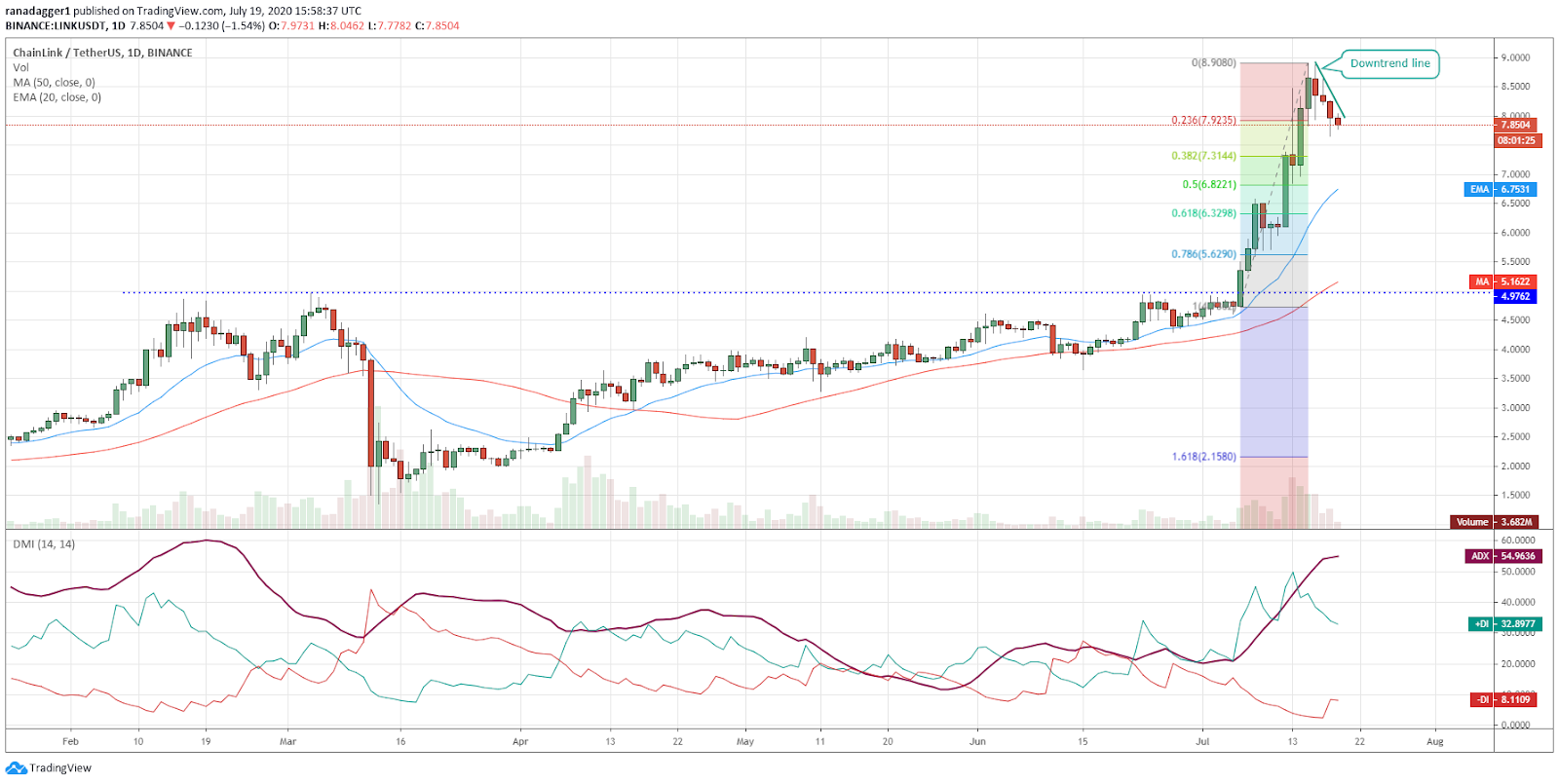 Usually, in a strong uptrend, the pullback lasts for one to three days. If the up move does not resume after a three-day correction, chances of a deeper pullback or a consolidation increase.

If the price bounces off this zone, it could offer an opportunity to the traders to establish long positions if they expect the uptrend to continue. 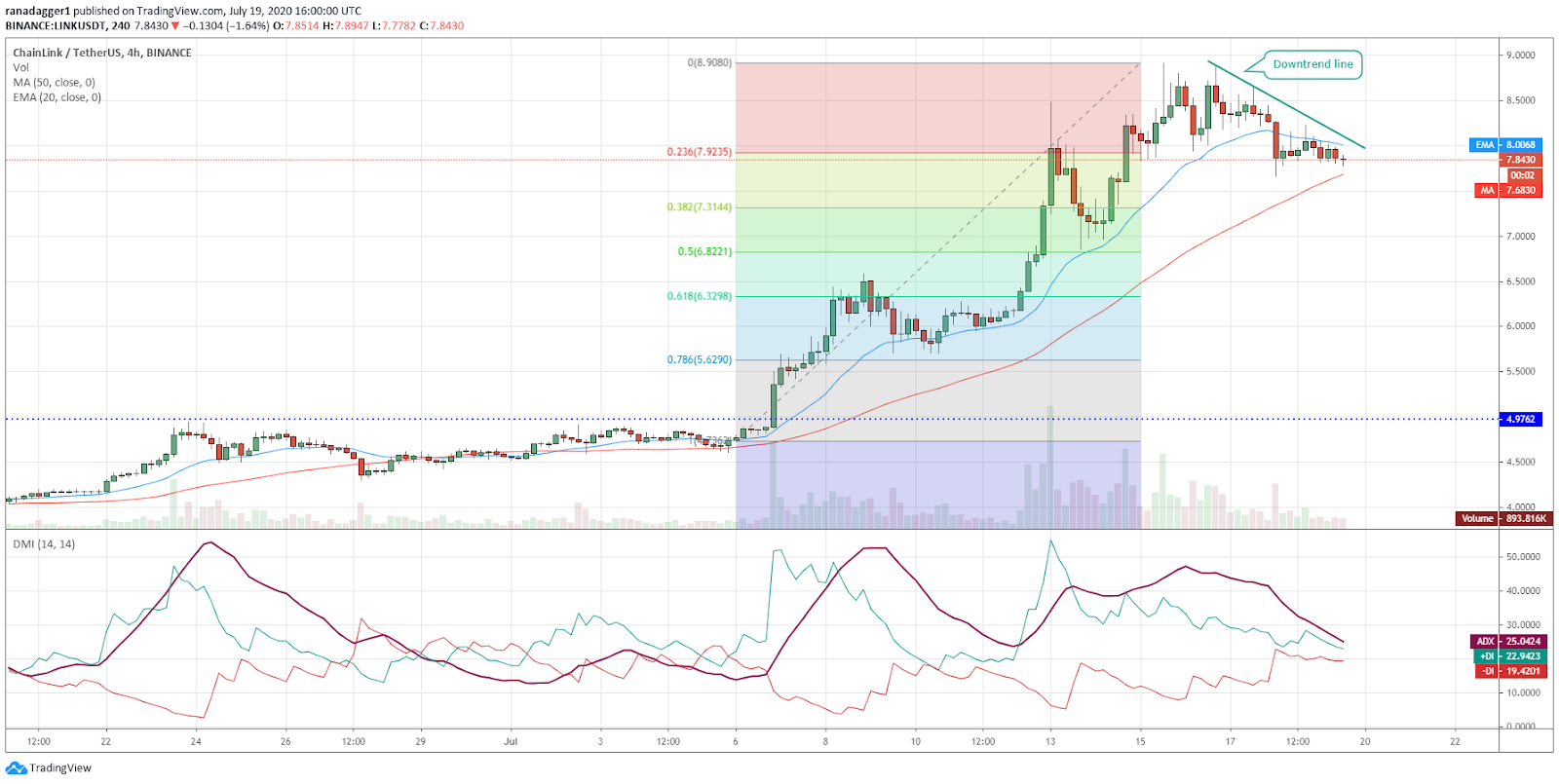 The 4-hour chart shows that the trend is weakening in the short-term as the ADX has dropped to 25 levels and the price is currently between the 20-EMA and the 50-SMA. A break below the 50-SMA could attract further selling by the short-term traders, which could result in a deeper correction to $6.8221.

However, if the LINK/USD pair rebounds off the 50-SMA and bounces above the downtrend line and $8.2241, it will be the first indication of strength. Above this level, a retest of $8.9080 is likely and if this level is crossed, the uptrend is likely to resume.

Stellar Lumens (XLM) is in a strong uptrend with the ADX above the 42 level. However, the bulls could not sustain the price above the $0.101360 level, which suggests selling at higher levels. 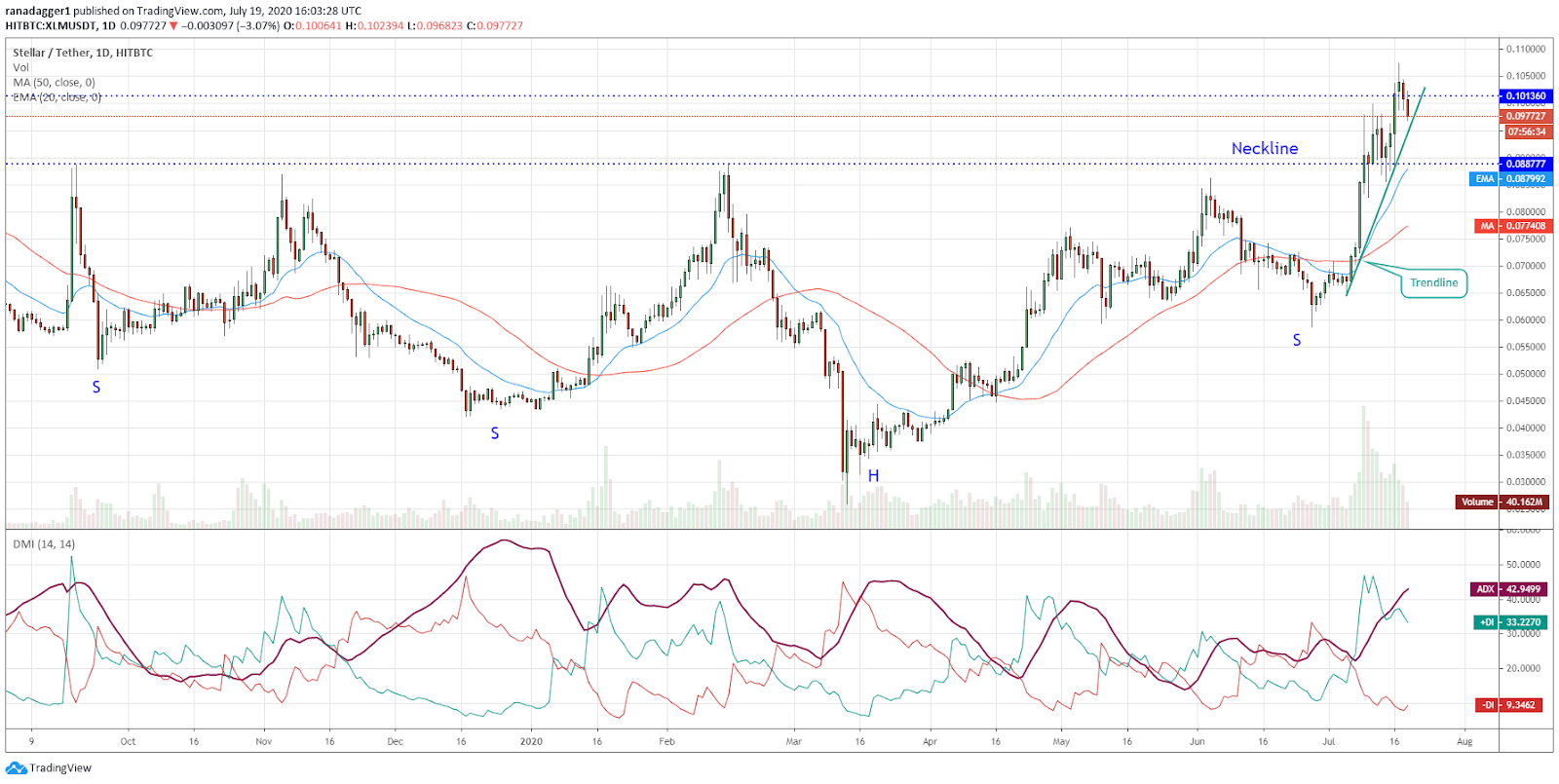 If the 14th-ranked cryptocurrency on CoinMarketCap rebounds off the trendline, the bulls will once again attempt to resume the uptrend. If they can push the price above $0.107455, a rally to $0.13 and then to $0.14 is possible.

A breakout of these levels can carry the price to $0.151491, which is the pattern target of the breakout from the inverse head and shoulders pattern.

This bullish view will be invalidated in the short-term if the bears sink the price below the trendline. In such a case, a correction to the 20-day EMA ($0.088) is possible. 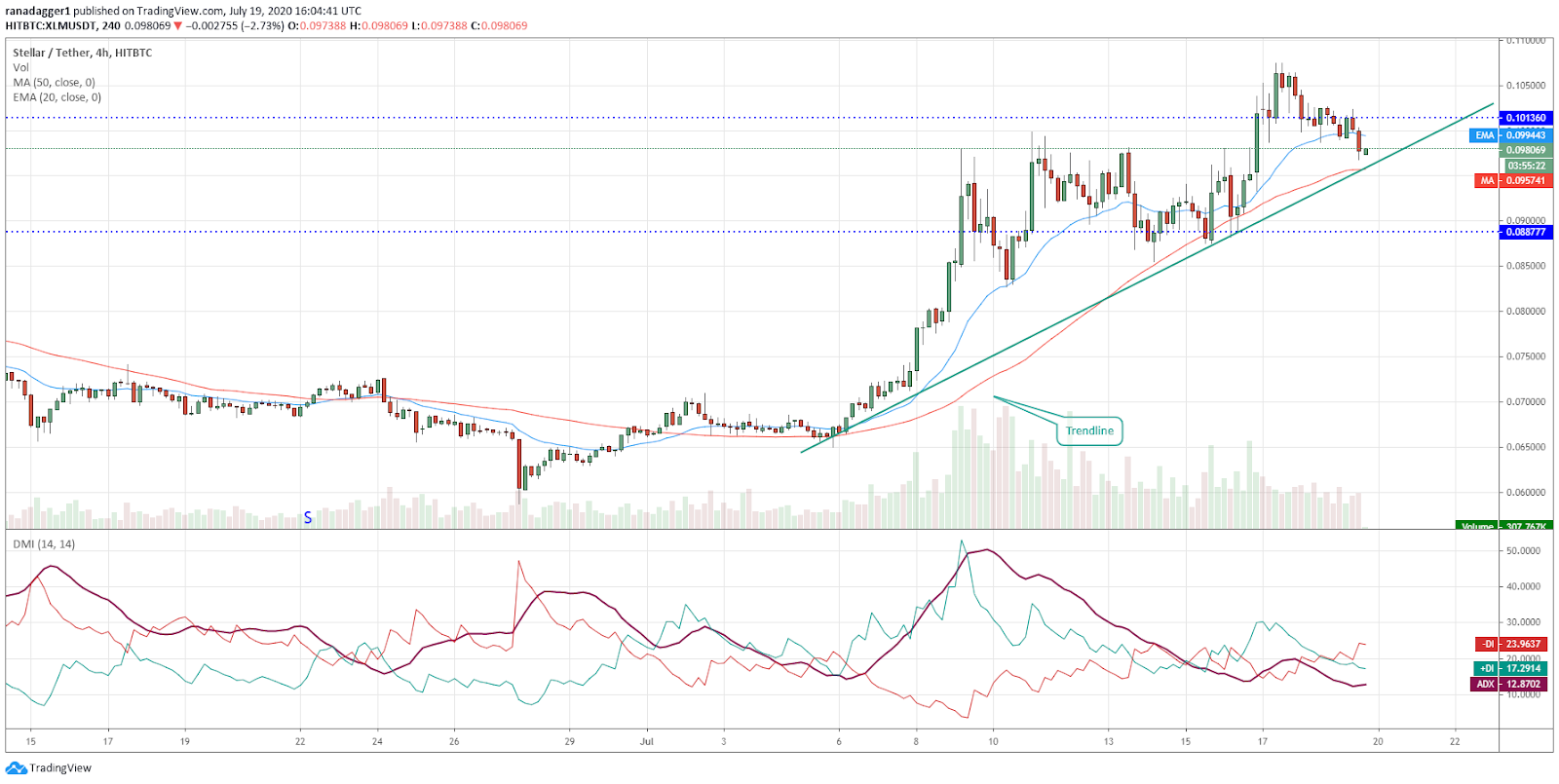 The 4-hour chart shows that the bears have broken below the 20-EMA, which suggests profit booking by the short-term bulls. However, the bulls are likely to defend the trendline aggressively.

If the XLM/USD pair rebounds off the trendline, the bulls will attempt to push the price above the $0.101360–$0.102626 resistance zone, which could offer a trading window with a good risk to reward ratio.

VeChain (VET) is in a strong uptrend with the ADX above 43 level. The altcoin broke above the stiff resistance of $0.020 on July 8 but the bulls could not sustain the higher levels, which resulted in profit booking by the short-term traders. 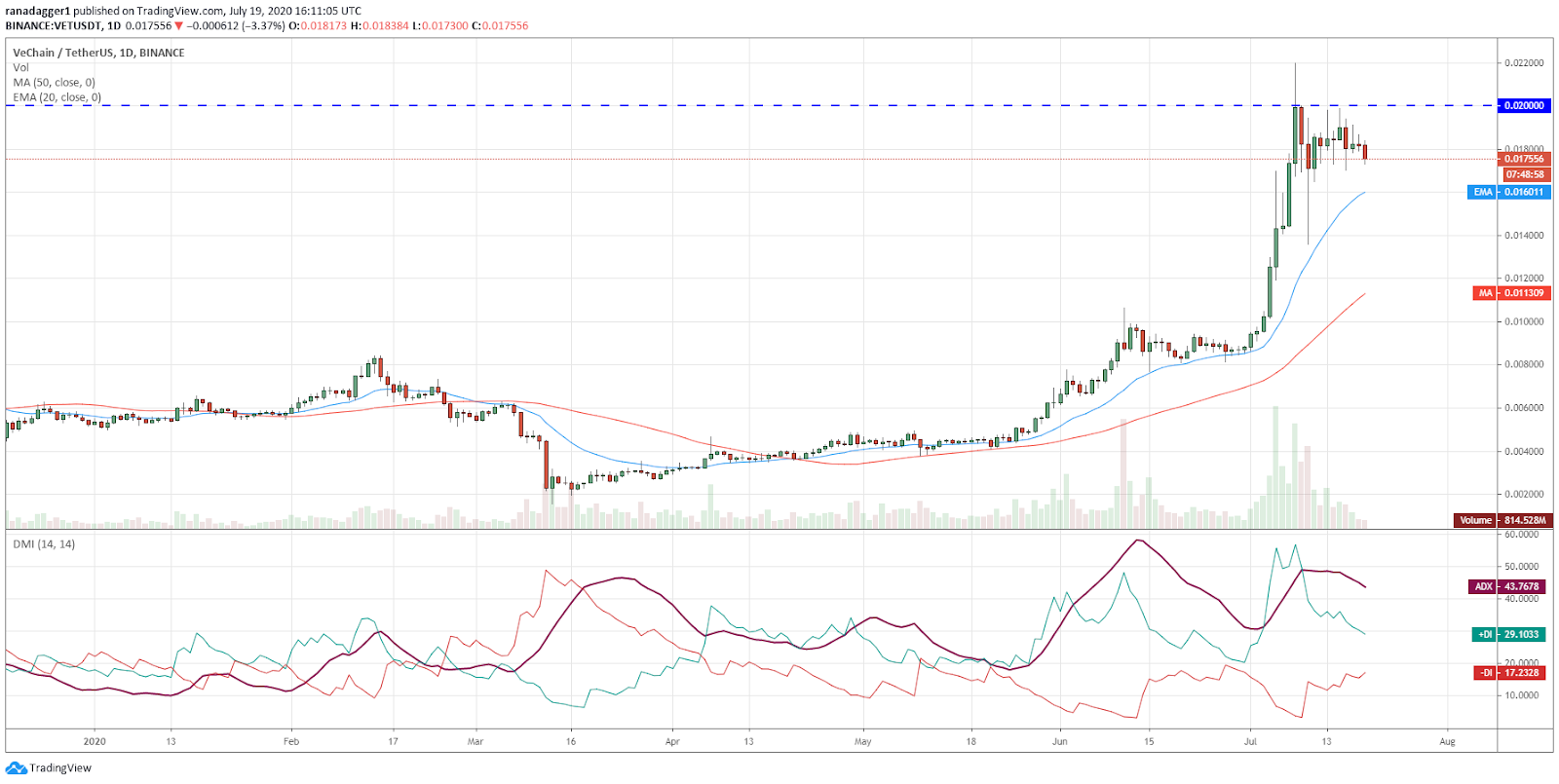 Since then, the 19th-ranked cryptocurrency on CoinMarketCap has been consolidating close to the $0.020 resistance. On the downside, the 20-day EMA ($0.016) is the critical support to watch out for.

If the price rebounds off this support, the bulls will again try to propel the altcoin above the $0.020 level. A close (UTC time) above this resistance is likely to resume the uptrend. This bullish view will be invalidated if the bears sink the price below the 20-EMA. 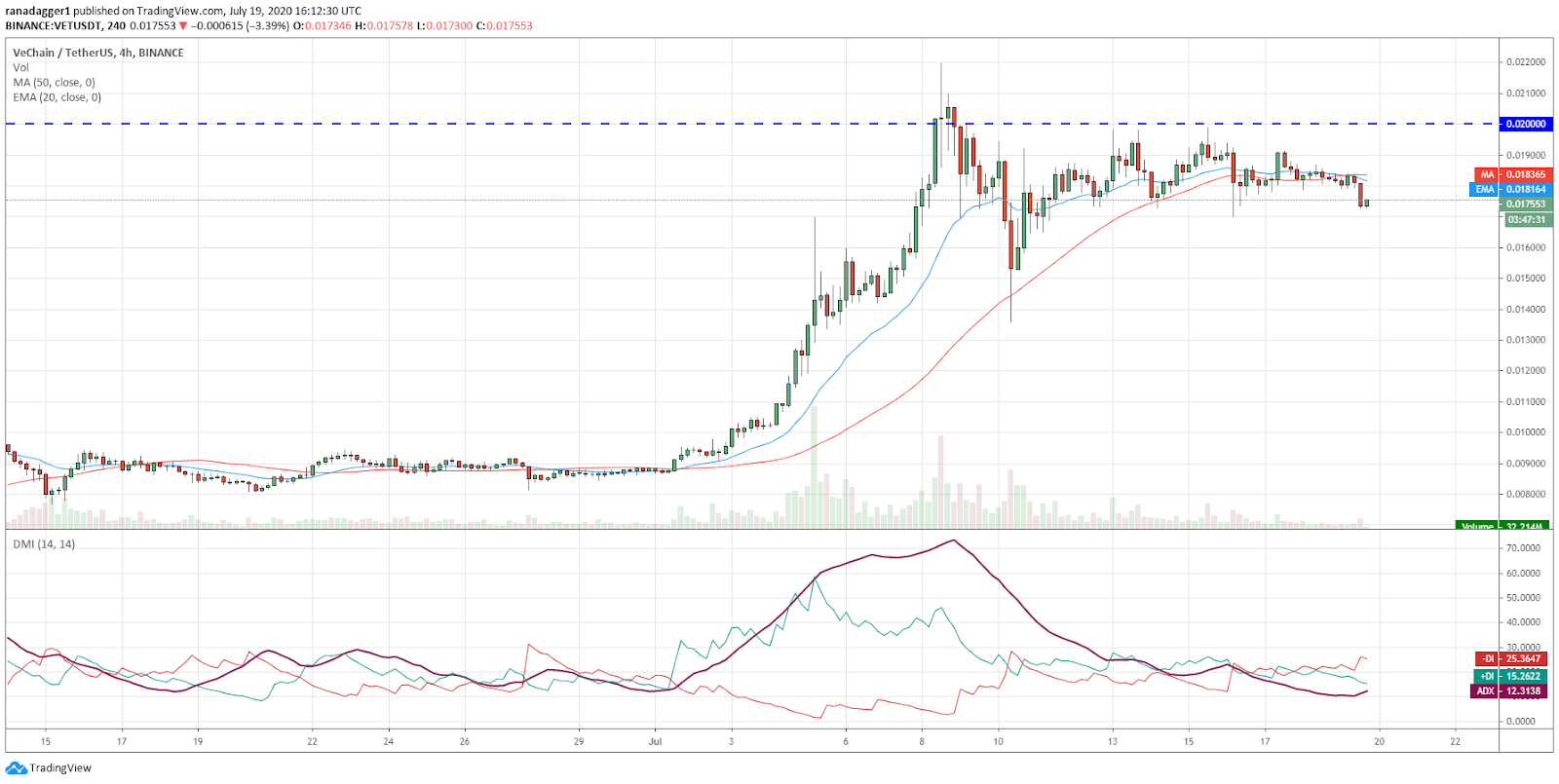 A break below $0.017 could be the first indication that the bears are back in action. Below this support, a drop to $0.014 is possible.

Conversely, if the price rebounds off $0.017, the bulls will again attempt to carry the price to $0.020. The uptrend is likely to resume after the price sustains above this resistance.

Digitex Futures (DGTX) will be launching its commission-free Bitcoin futures exchange to the general public on July 31, after eight months of extensive testing on both the testnet and mainnet with select traders. The world’s first zero-fee Bitcoin futures exchange already has about 30,000 traders onboard with many joining daily, who are generating over $250 million in 24-hour trading volume.

Scalpers and high-frequency traders can benefit from the fast order matching engine and trading ladder interface as trading small price fluctuations is made easier by the fact that there are no commissions.

The exchange will hold a day-long trading event on the launch day and live trading competitions and will reward trades with up to $250,000 in DGTX tokens and other merchandise to the winners.

Digitex CEO Adam Todd said: “I’m just so excited to finally give crypto traders what they have been waiting for and what they deserve. Finally, an exchange that serves its users with no mechanical edge in the form of commissions working against them.” 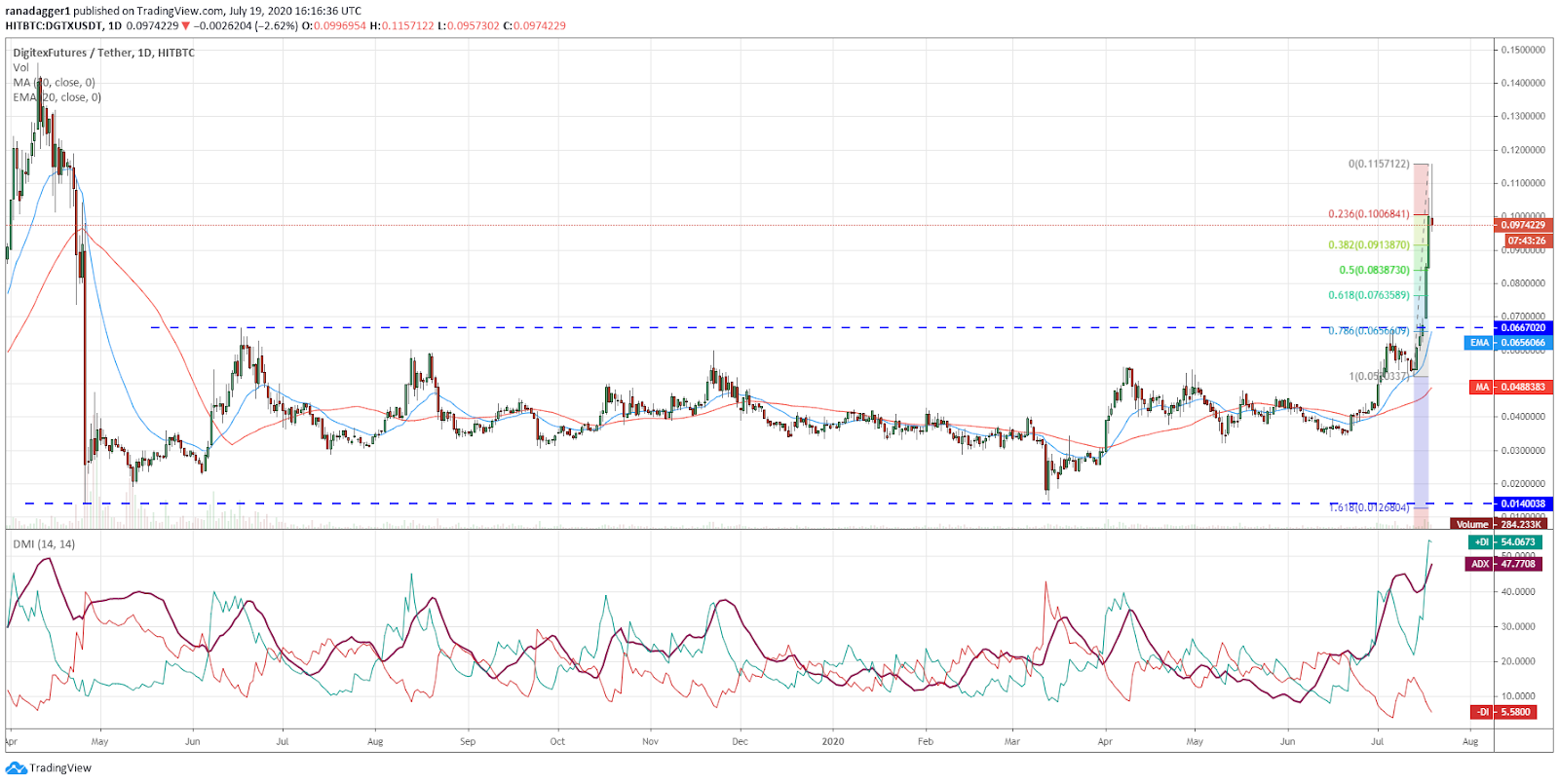 The ADX has risen above the 47 level and the +DI is surging, which suggests that the bulls are firmly in command.

However, the 82nd-ranked cryptocurrency on CoinMarketCap could face profit booking close to $0.1194002, which could result in a minor correction or consolidation for a one to three day period. The first support is at $0.0913870 and then at $0.0838730, which are 38.2% and 50% Fibonacci retrenchment levels of the most recent leg of the rally.

This bullish view will be invalidated if the bears sink the price below the 61.8% Fibonacci retracement level at $0.0763589.

*Disclaimer: DGTX is a featured cryptocurrency from one of Cointelegraph’s sponsors, its inclusion did not affect the price analysis in this article.