Bitcoin price collapsed to a 2020 low below $6,000 as US markets sharply sold off as investors are unconvinced that the coronavirus is under control.

Equities markets and the crypto market continue to struggle as Europe and the United States enact increasingly drastic measures to ward off the spread of the Coronavirus. Among the general public and investors, there is a feeling that world governments have drug their feet in responding to what is clearly an urgent crisis, thus major markets continue to tumble.

The Dow opened sharply down, triggering the circuit breaker which halted trading for 15 minutes. Despite the intervention and a live statement from President Trump, the Dow is down 7% and the S&P 500 has dropped by 6%.

By the afternoon hours, the U.S. Federal Reserve revealed a plan to beef up its funding operation by at least $500 billion and there are also plans to expand the classes of securities that will be purchased. This announcement helped major markets recover roughly 50% of their daily losses but was short-lived as the selloff continued less than 30 minutes later.

Surprisingly, it took less than two weeks for a historic 11-year bull market to shift to a bear market.

What’s next for the price of Bitcoin?

In a worst-case scenario, if the price is unable to hold $6,000, a revisit to $5,500 is likely and the volume profile visible range (VPVR) and Bitcoin’s price history from April 3 to April 30 show support in this range. Below $5,500 there appears to be support at $5,200 and below this level the VPVR shows purchasing interest at $4,050.

A positive sign would involve Bitcoin reclaiming the $6,400 and $6,800 support but at this point clearer signal of the equities markets finding a bottom is required before investors will show further interest in buying cryptocurrency, hence the declining buy volume on the hourly time frame.

Altcoins were also slammed by today's strong pullback, with virtually every cryptocurrency in the top-50 dropping by double digits. In fact, today’s sell-off from $223 billion to $167 billion vaporized 25% of the cryptocurrency total market capitalization and data from Skew shows that $700 million in liquidations occurred on BitMEX. 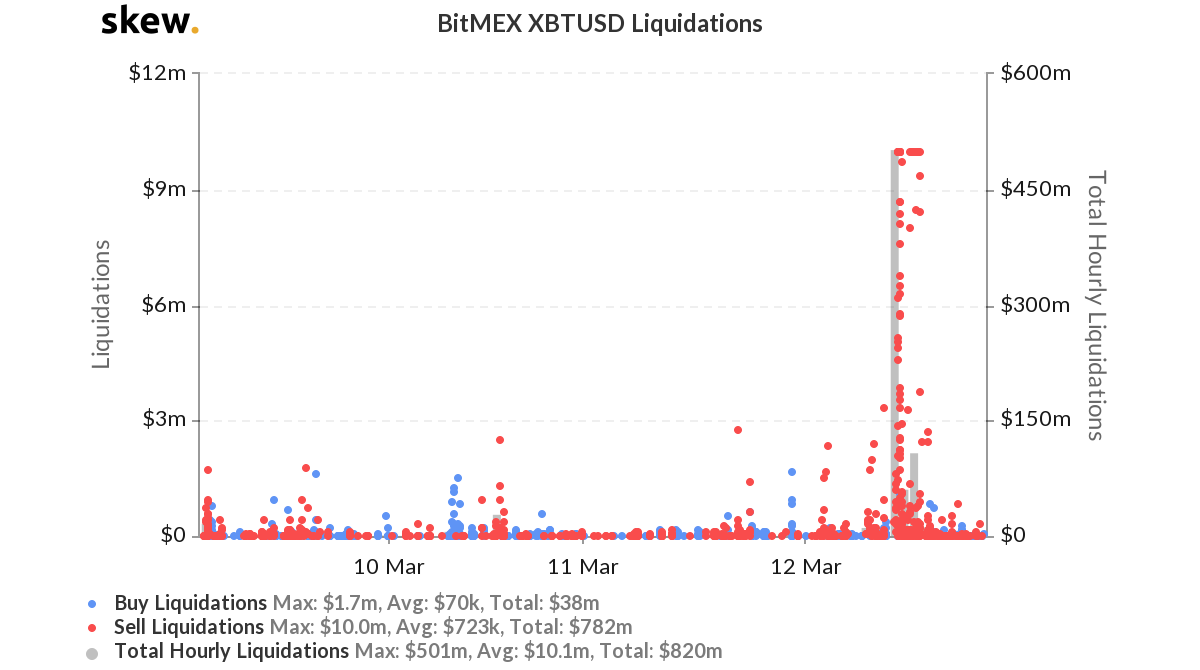