As many in the cryptocurrency community prepare for this weekend’s Bitcoin in the Beltway conference in DC, we wanted to take a look back at some of the week’s big stories. 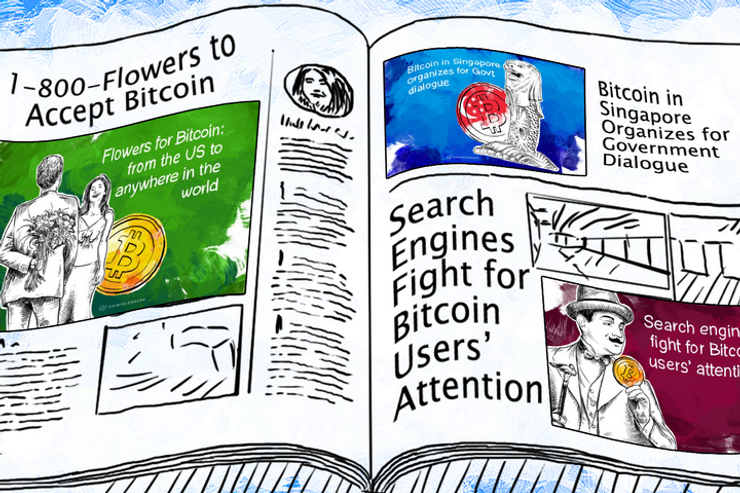 As many in the cryptocurrency community prepare for this weekend’s Bitcoin in the Beltway conference in DC, we wanted to take a look back at some of the week’s big stories.

Carlo Caraluzzo reports that a company that built its name with flower-delivery orders over the phone will soon begin processing Bitcoin orders via Coinbase.

“There are currently more than 30,000 businesses worldwide that are accepting cryptocurrencies, mostly Bitcoin, for payment and others who are also making payroll and paying for expenses with Bitcoin. The latest of these to join the lineup is 1-800-Flowers. ... The company has a wide selection of flowers, flower arrangements and gifts which can be delivered straight to the customer’s door by one of the thousands of distributors around the globe.”

Cyril Gibson reports on a new organization aiming to facilitate the currency’s expansion in Singapore.

“The Association of Cryptocurrency Enterprises and Startups, Singapore (ACCESS) was formed by various members of the Singapore Bitcoin community to facilitate ‘an open and clear dialogue between Singapore cryptocurrency businesses and the wider public, including regulators,’ it was announced in a statement issued today.

ACCESS is the first such organization to surface in the Asian Bitcoin space, an area which currently variously contends with myriad governmental stances and restrictions.”

Nina Lyon notes that search engines such as Yahoo, Google, Bing, and DuckDuckGo have been integrating Bitcoin price search operators.

“The biggest thing to take away from this is that the movers and shakers of the Internet are finally not only starting to acknowledge the existence of Bitcoin but are demonstrating that they can quickly adapt to a world with cryptocurrencies, if necessary.”

4. BTC Companies Rally Around Charities with the BTC Cup

Caraluzzo reports on some of the great work BitPay has been doing recently to get Bitcoin embedded even more deeply in the public’s awareness.

“The effort has twin purposes and a profile unique among charities. Large charities such as the United Way often spend more money on administration and paying for expensive fundraising experts than they actually put into charitable activities and this has pushed many people away from both donating or sponsoring a charitable effort.”

5. Japan Says It Will Not Regulate Bitcoin

Allen Scott reported on Thursday that Japan was taking a hands-off approach toward Bitcoin, at least for now.

“Speaking at a committee meeting on Thursday discussing the party's take on the crypto-currency, Takuya Hirai, an LDP member who is in charge of the party's internet media division, stated: ‘Basically, we concluded that we will, for now, avoid a move towards legal regulation.’”

For those of you with free time this weekend, we have a lot of great reading we can recommend.