Bitcoin price is now facing stiff resistance at $7,800 with less than 17 days remaining before the much-anticipated halving event.

But Bitcoin is not the only cryptocurrency that has been showing strength as altcoins are also following suit with Cardano (ADA) jumping by 22% and Ethereum (ETH) by 16%.

So what can be expected from the markets with just over two weeks before the halving for Bitcoin? 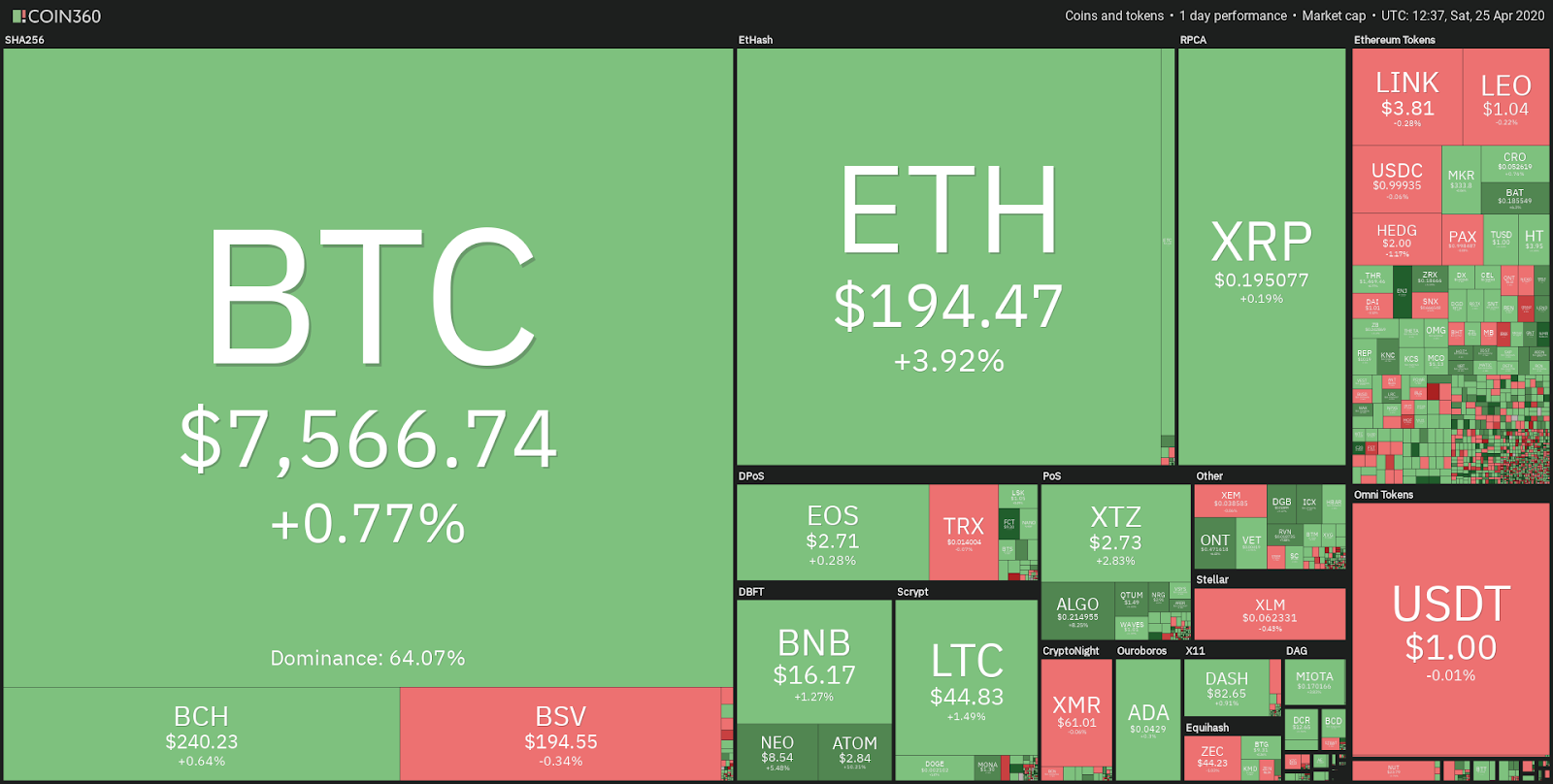 The price of Bitcoin was stagnating between $6,800 and $7,300 for a few weeks, which made the price indecisive on which direction it wanted to go. The clear answer was given by a crucial breakout above the $7,300 resistance zone, as the chart is showing. 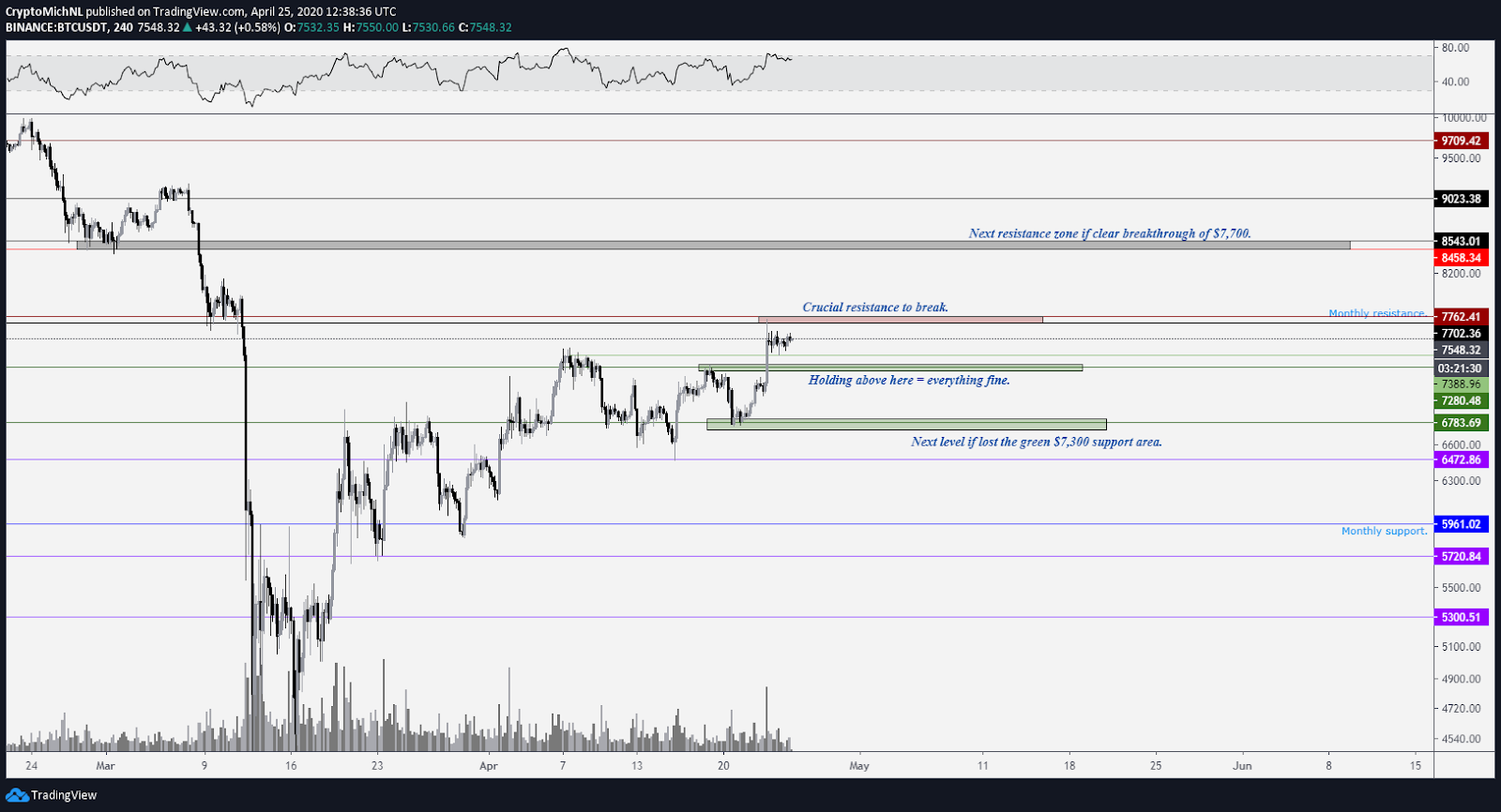 The price of Bitcoin held the $6,800 area earlier this week as support, after which it started to rumble up for a test of the resistances. These were then broken to the upside, which squeezed a massive amount of shorts out of the market.

This squeeze resulted in a push towards the next resistance level at $7,700-7,800, as the chart shows.

Currently, a new range is defined for Bitcoin. The resistance is found at the $7,700-7,800 area, while the support is found between $7,275 and $7,350. As long as the price of Bitcoin remains above this support level, further upwards pressure and momentum are warranted, especially going towards the halving. 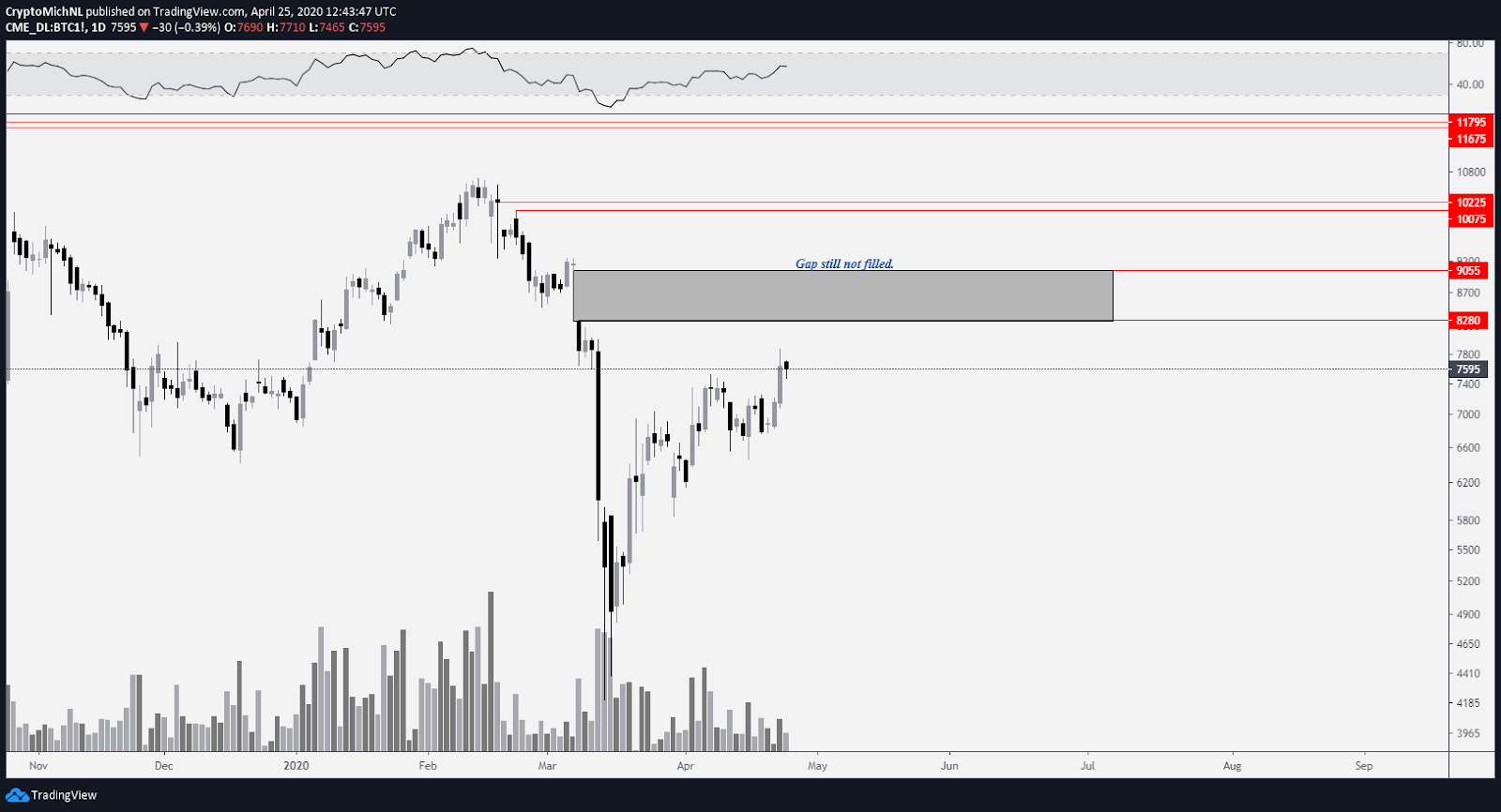 The BTC chart from the CME Futures is providing data regarding “gaps.” These gaps are created during the weekend as CME futures are not open on Saturdays and Sundays. Gaps are often used as an additional narrative for traders to trade on, which makes the upside of the current market interesting.

The chart is showing a significantly large gap between $8,280 and $9,055, which is likely to occur at some point. Alongside with the current gap structure, multiple other gaps are found at the upside, as there are others, specifically at $10,100 and at $11,675. 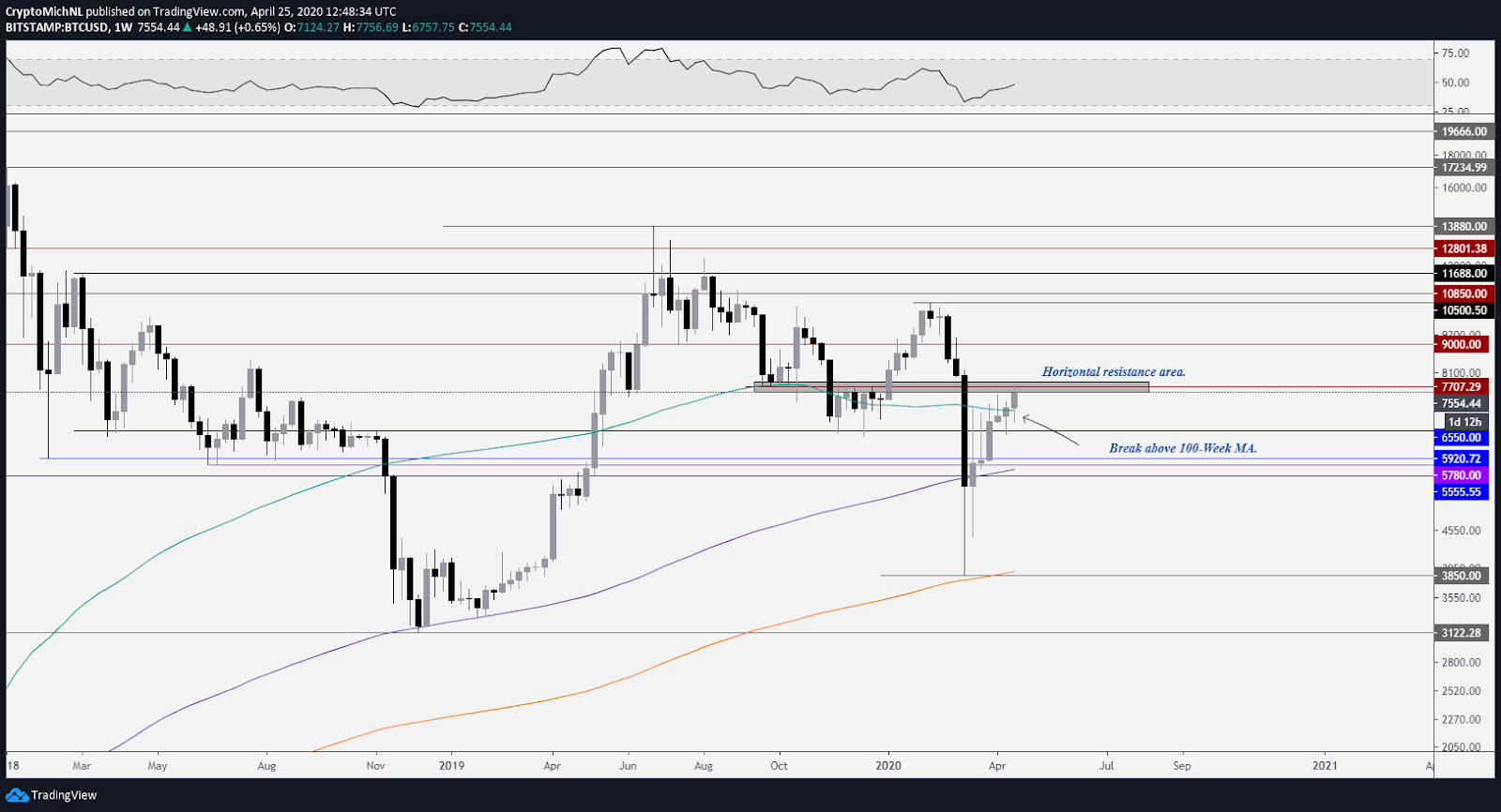 However, further upwards momentum should be warranted if the horizontal resistance level at $7,700 is broken to the upside. As the chart is showing, further continuation towards $9,000 is on the tables if $7,700 breaks. 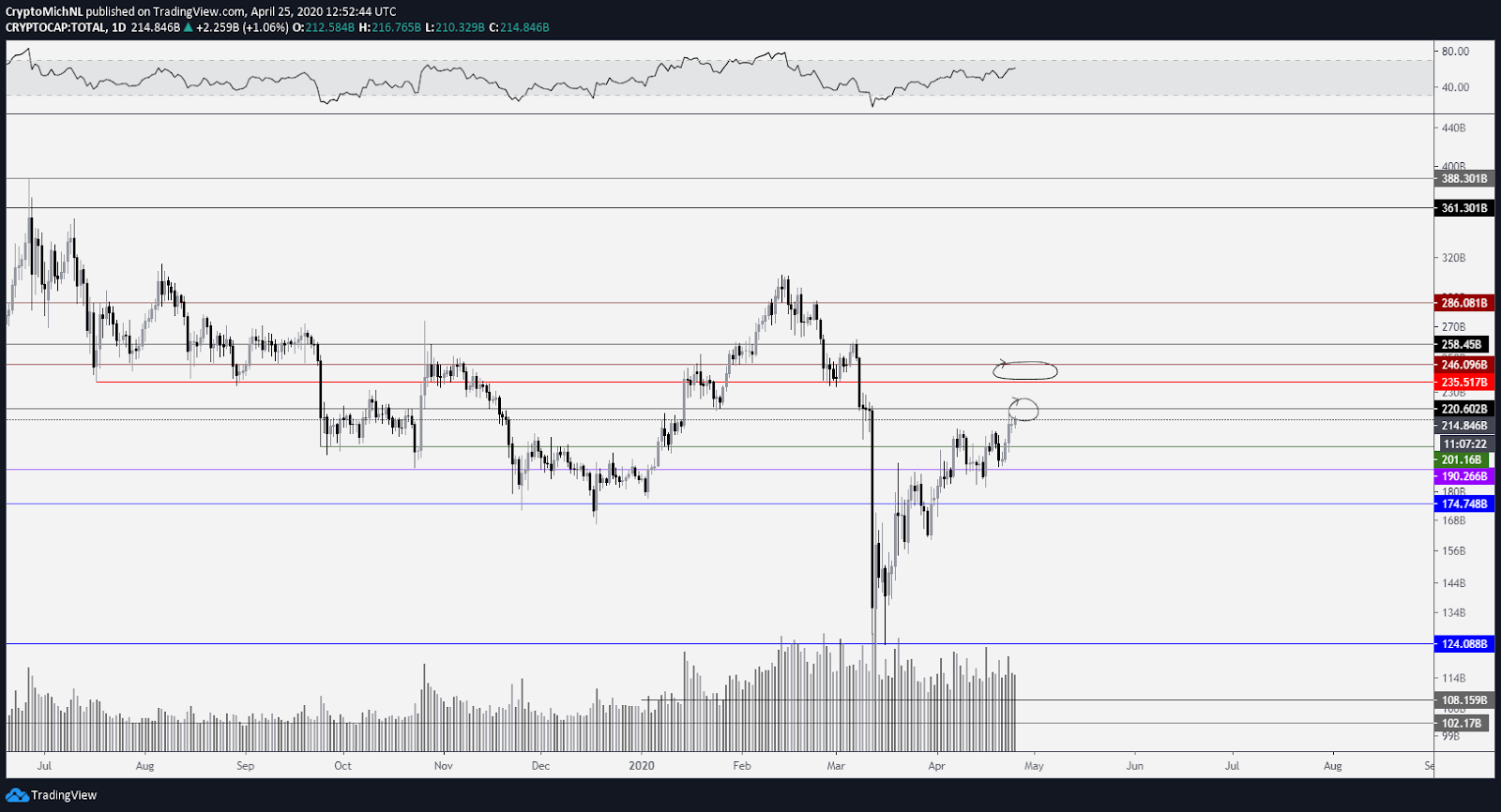 The total market capitalization cryptocurrency chart is providing a clear view. The $190 billion zone has held as support, which was crucial for any further upwards momentum.

Currently, the total market capitalization chart is facing the next resistance level at $220 billion. Breaking through this level would warrant further upwards momentum towards $235-245 billion for the cryptocurrency markets.

So what are the key support levels now?

From the chart, I’d like to see $202-207 billion holds as support, as that’s the resistance the market capitalization broke through. Once the market cap breaks below this level, further downwards tests at $175 billion are back on the table.

Altcoin market capitalization gained more than 100% in past weeks 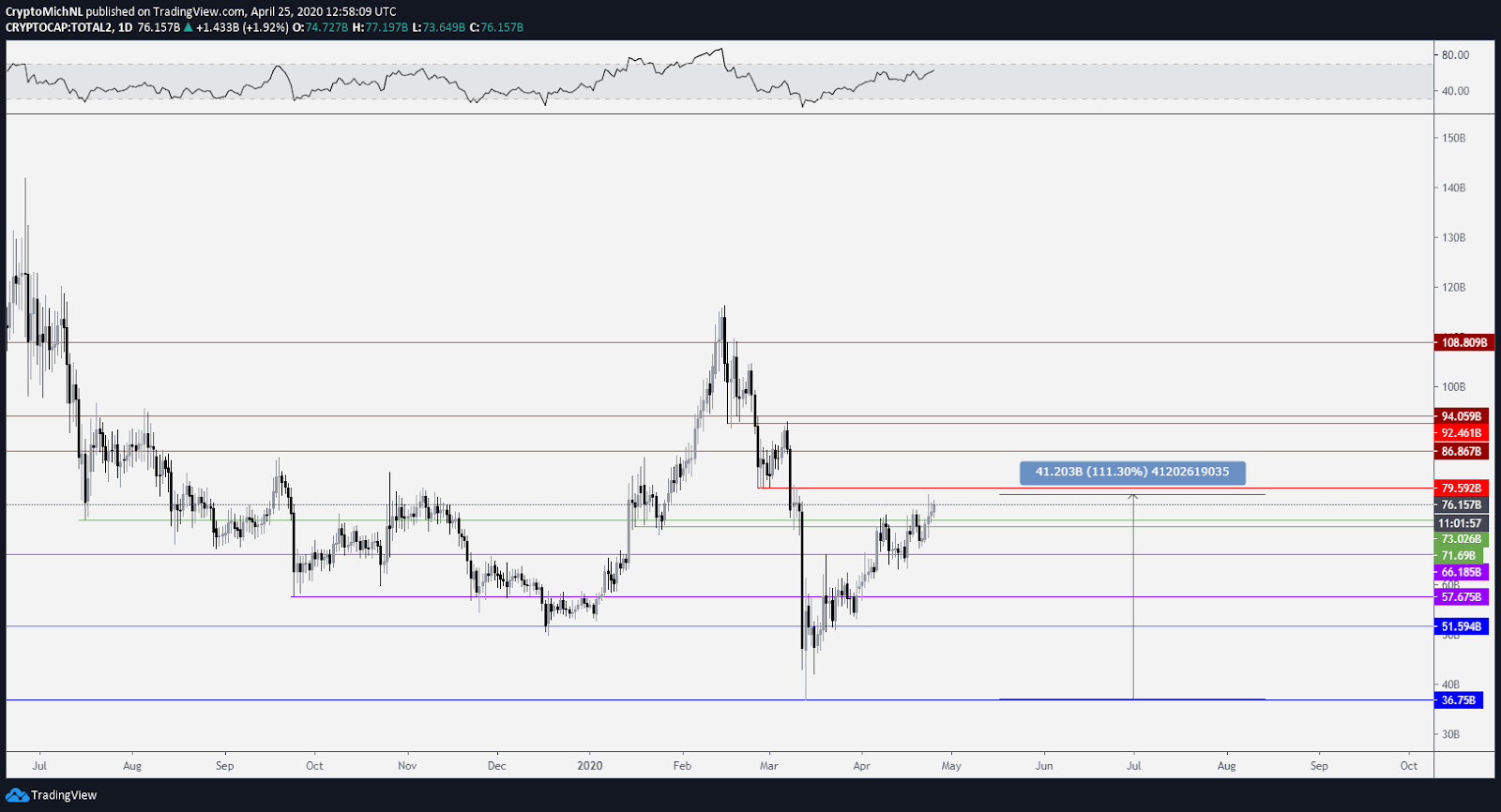 Similar to the total market capitalization, a breakout above the green levels occurred in the past few days, resulting in upwards moves for several altcoins.

The next resistance to break is the level of around $79-80 billion. Next, further upwards momentum is likely to occur towards $92-94 billion. However, losing the green levels and tests at $66 and $57.5 billion should be expected. 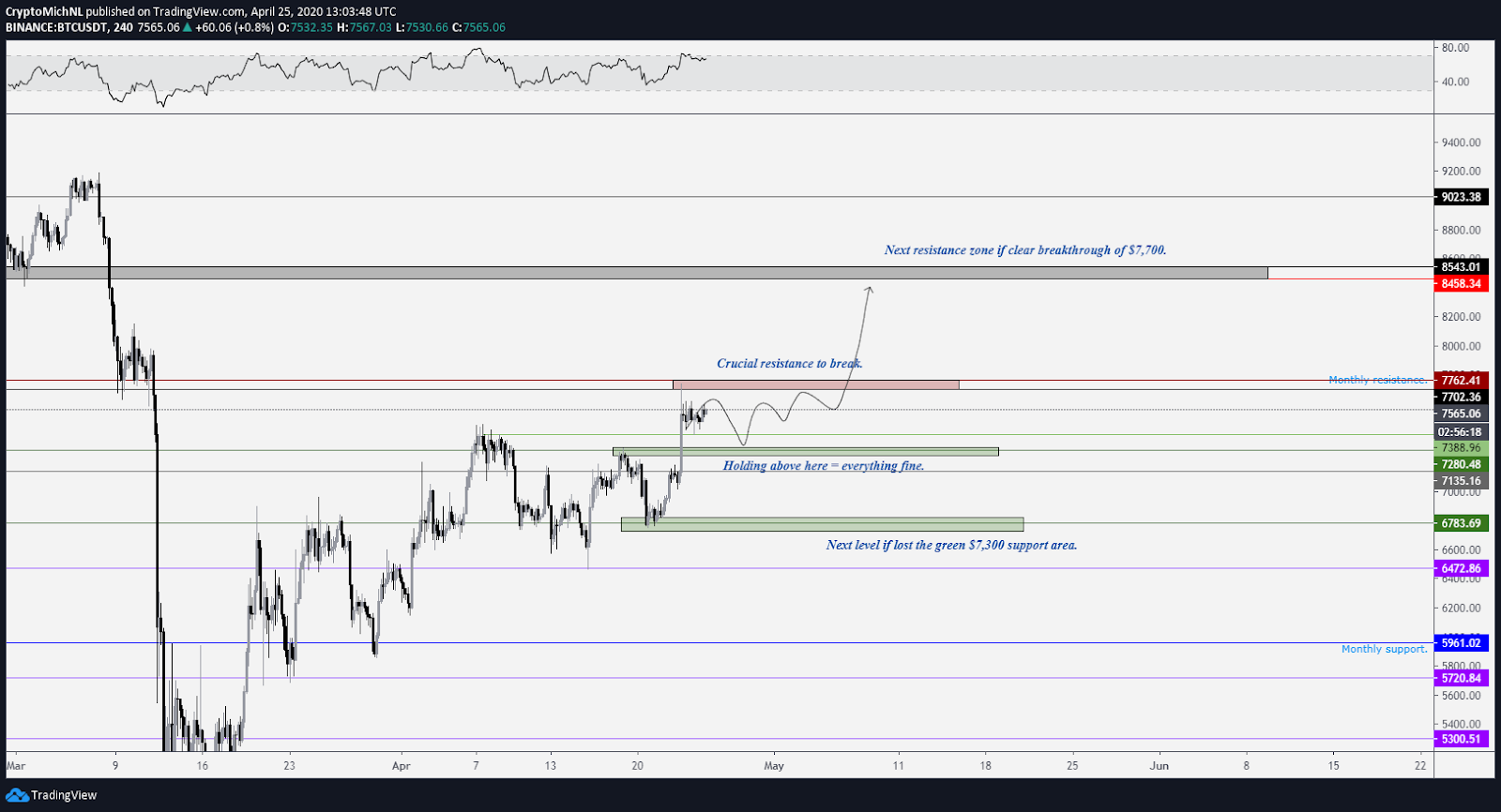 Either way, both scenarios are quite simple, given that Bitcoin broke out of a sideways range. As long as the green levels around $7,300 hold as support, further upwards momentum is in play.

Moreover, the halving narrative is also becoming increasingly important. Such a narrative could create FOMO (fear of missing out) and generate some more buying pressure leading up to the event. Be aware, however, as such events typically end up in “buy the rumor, sell the news” fashion. In other words, a substantial rally going into the event with a selloff after the event should not be unexpected.

In any case, holding $7,300 as support strengthens the bullish case. The price of Bitcoin could be hovering around this range for a while before attacking either of the levels. 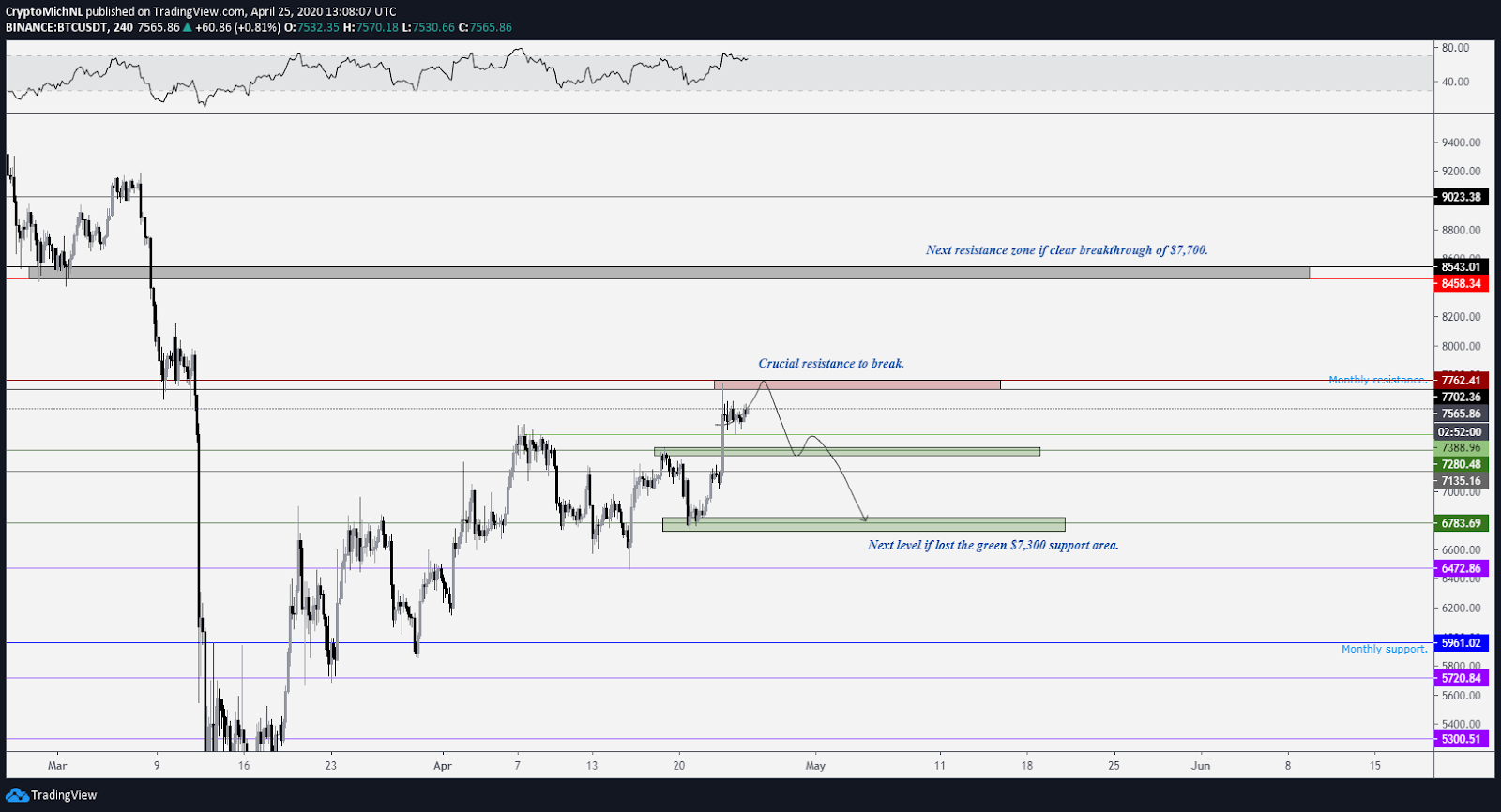 The bearish scenario is also straightforward. If the price of Bitcoin starts to rally towards the resistance but then sees a selloff afterward, a temporary top is likely to be in. Particularly, since the $7,700 area was the last level of defense before the Black Thursday BTC price crash.

If that level can’t be reclaimed as support, lower levels must then be retested before the market can regroup for any further upward moves.