After Testing $7K — Is Bitcoin Price Finally Close to the Bottom?

Bitcoin price crashed below the 100-day moving average, leaving bulls no choice but to find a way to reclaim $7.6K in order to reverse the bear trend.

The loss in Bitcoin valuation has dragged the entire market down with notable loser being Ether (ETH), which has lost support at $150 and printed lows of almost -15% at $137.

Bitcoin dominance is up for the week at 69%, meaning that BTC has outperformed the remainder of the cryptocurrency market during the continued decline this week. 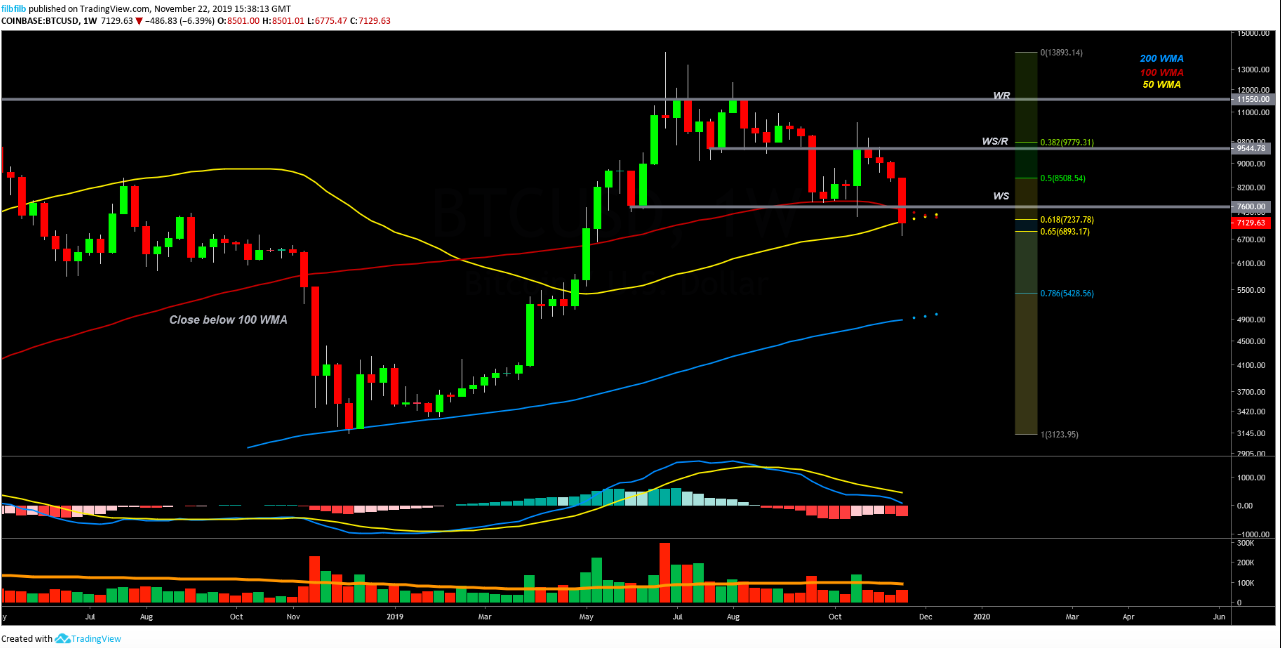 Bitcoin is down around 16% from the weekly open of $8,500. As price fell towards previous support at $7,600 and the 100-week moving average (MA), Bitcoin found no support and sold off beyond the 61.8% retracement and down to the 65% retracement of the 2019 bull run where it has found some intermediate support.

The gap between the Fibonacci retracement level of 61.8% and 65% is sometimes referred to as the “golden pocket” where traders look to profit from shorts or take on long positions. So this may explain some of the reasons why we have found some support here. The 50-week MA is also acting to support the price.

It will, therefore, be key to see if the 100-week moving average and the $7,600 level now turn to resistance, which would be problematic for a bullish scenario.

The bulls, therefore, need to look to close the weekly candle above $7,600 which looks to be a tall order. Key Fibonacci levels and weekly moving average support are now down in the $5K levels and this would typically be the bull’s absolute last line of defense. 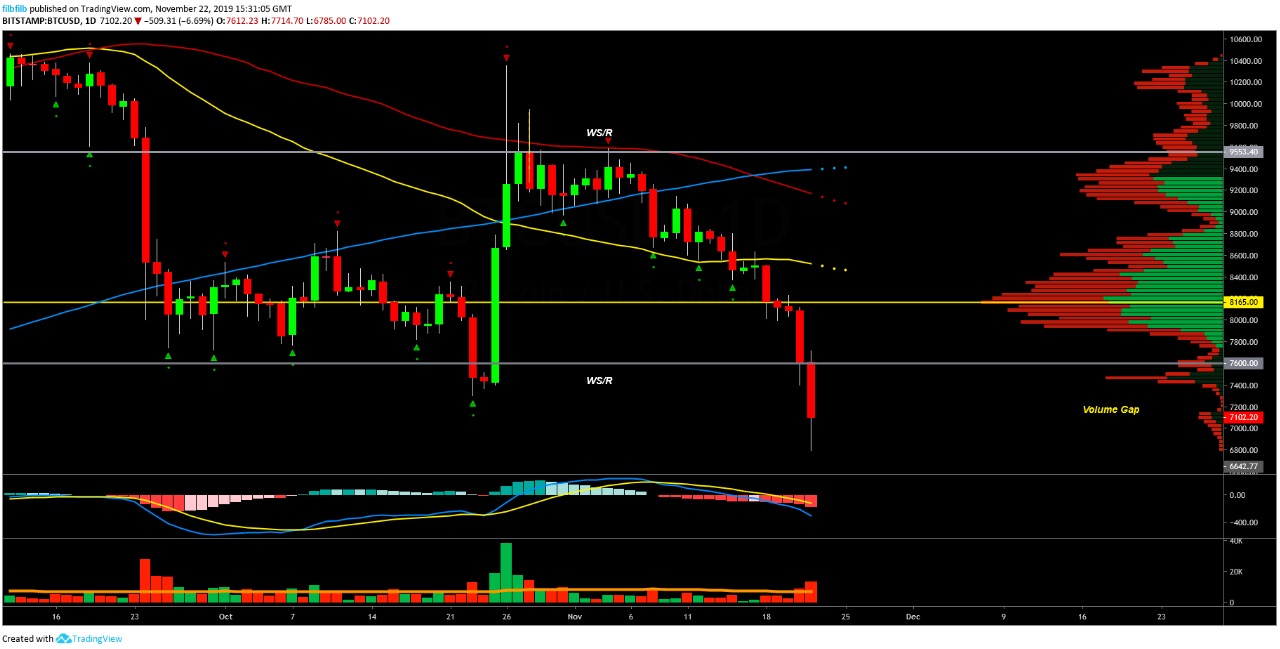 At first glance, the daily chart looks particularly bearish. BTC price failed to find support at $7,600 and fell straight through the previous support at 7,400, which was the launchpad for the move to $10,000. There was very little price support in history for trades at prices below the point of control at $8,200

Volume has been steadily increasing through the down move with today’s volume being a new recent high. The Moving Average Convergence Divergence indicator — or MACD — has also printed new lows illustrating the increase in bearish momentum.

How close is Bitcoin to a local bottom? 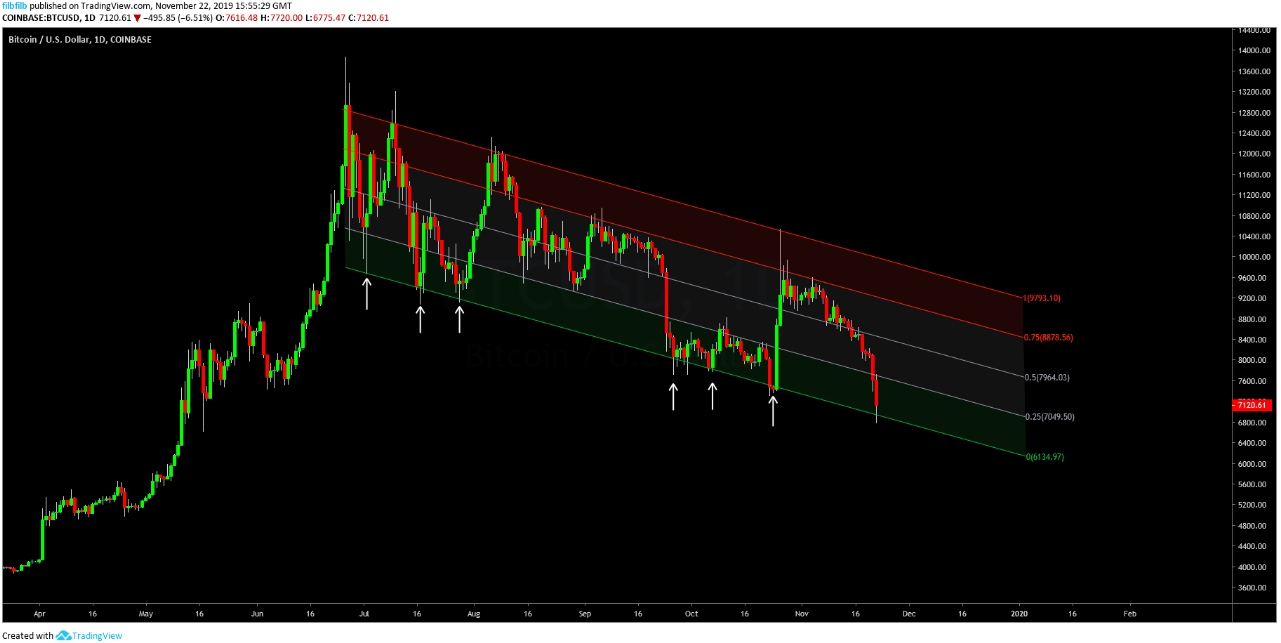 Looking at the daily chart from afar, it is clear that Bitcoin has hit the bottom of the downward channel in which it has been trading since July.

Typically, this has proven to be an area in which the balance has favored a bullish reversal, often taking some time at the bottom of the channel before making a U-turn to the top of the channel. 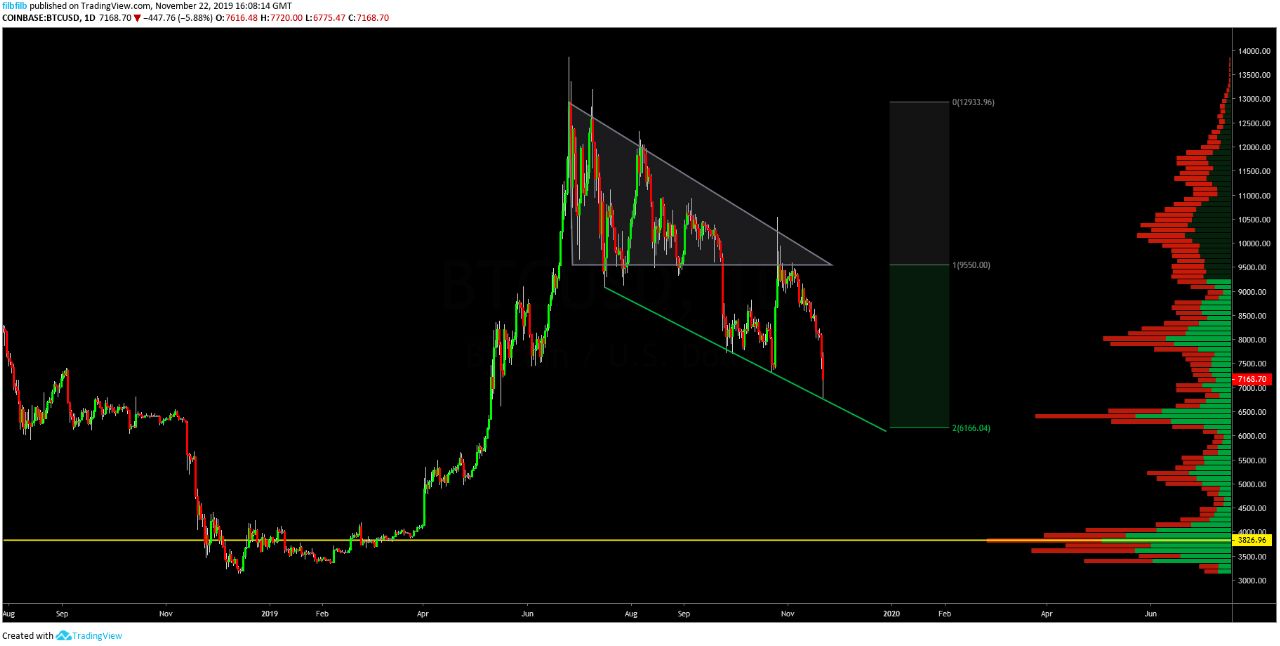 Having broken down from the descending triangle at $9,550, the technical target on the following down move is just above $6,000.

This is also an area where there was a reasonable area of interest, particularly at $6,500, where a bounce in price happened earlier in the year following a large selloff on spot exchange Bitstamp — this is visible at the large volume node on the VPVR or Volume Profile Visible Range.

Based on technicals and trends alone, it seems as though there is a good argument for Bitcoin finding some buying interest in the $6,000 price range. 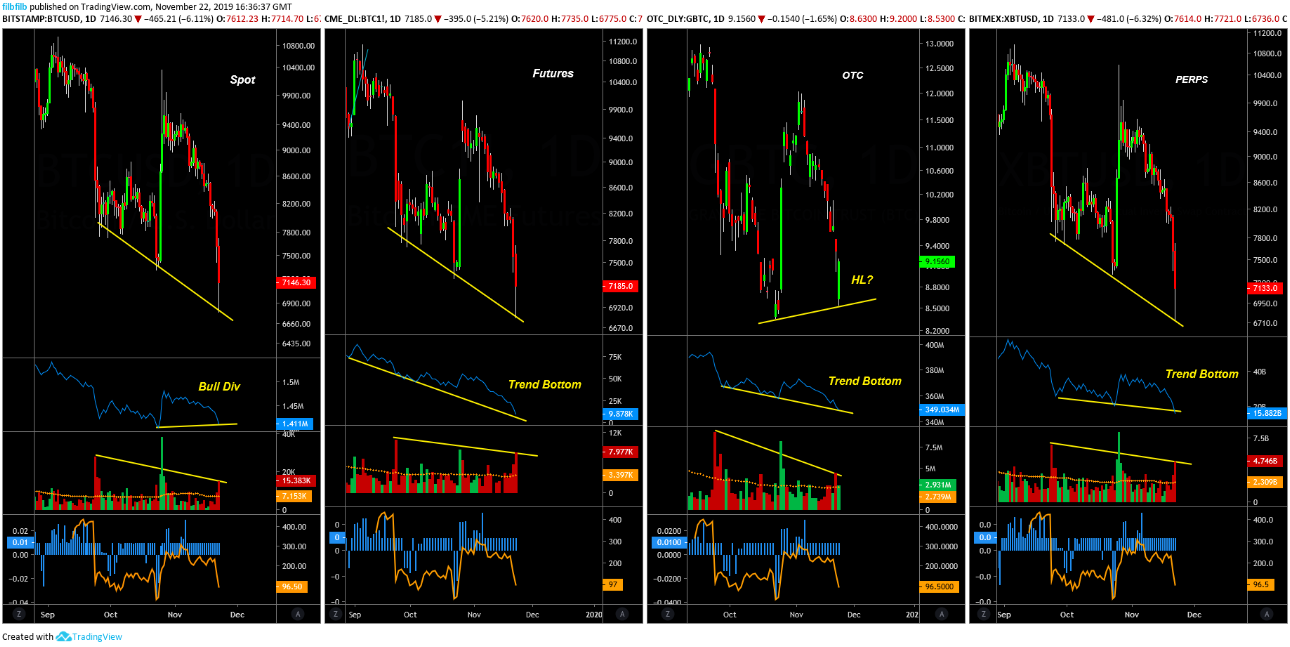 Looking across the different markets, however, some interesting differences have emerged. Regarding volume, the selling volume is noticeably lower than the drop from $10,000 implying that selling pressure may be close to subsiding.

The spot exchanges are showing signs of bullish divergence on the OBV, which shows the decreasing selling pressure relatively. The OTC market in GBTC is showing a higher low, meaning the premium with the spot market has increased, which is sometimes considered a bullish indicator.

The premium on the futures market has been eliminated and is now in backwardation, meaning spot price is above the futures price. This is indicative of bearish sentiment, which can often also be an early sign that the decline in price may be close to subsiding. 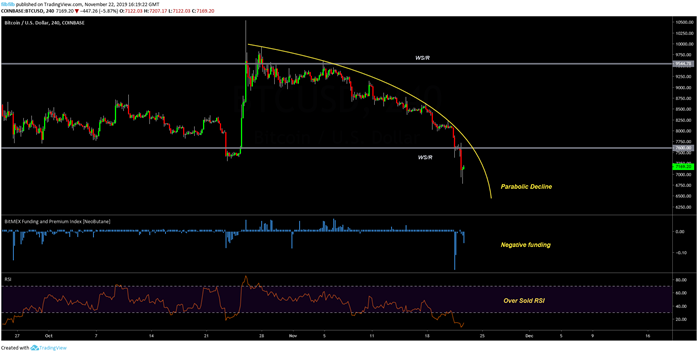 The 4-hour chart shows that Bitcoin has experienced a parabolic decline on low timeframes as it broke the weekly support. The RSI is now heavily oversold and there’s also been negative funding where shorts pay longs to be short, which has typically been indicative of a bottoming price due to the overly bearish sentiment in the market.

The bounce in price from the lows is emphasized on the 4-hour chart and the eyes will be on this level for support. A close on the daily below it would be a bad sign for the bulls. 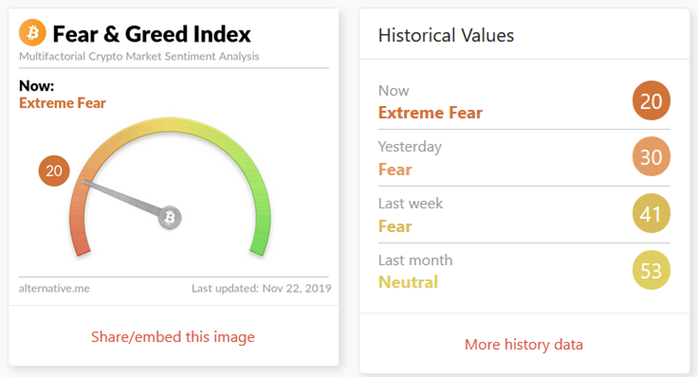 Finally, the Cryptocurrency Fear and Greed index highlights that the market is now in extreme fear having declined from being neutral during October.

Again, Bitcoin price typically has an inverse relationship with this index and could highlight a temporary bottom may be nearing, although the index has seen lows as far as 5 on the scale.

Bitcoin bulls have clearly lost key support at the 100-week moving average, which has spelled trouble in the past and this accelerated today’s price drop. However, other indicators being in volume, sentiment, trend and pattern analysis all seem to point to there being signs of a nearing bottom.

The price point of $7,600 will be a key level for the bulls to reclaim but this will be a challenge, especially in the short term. Probability would suggest BTC/USD will need to spend a little more time testing below $7,000 before there is a significant bullish reversal.