Better Than Corporations: Layoffs in Crypto Are On the Rise, Still Lower Than in Other Industries

Job cuts have become a reality in the crypto industry - but they pale in comparison to the biggest corporate layoffs in history.

Since Bitcoin hit its all-time high of $20,000, the dominant cryptocurrency has seen more than an 80 percent decline in value from that historic milestone over the past 12 months.

The popularity of Satoshi Nakamoto’s Bitcoin pioneered the way for other projects to explore the possibilities of blockchain technology. The brightest minds pushed the boundaries, which gave birth to Ethereum, Ripple and other projects that have provided new and unique use cases for distributed ledger technology (DLT).

Their success set the bar high, but that also led the way for a swathe of projects being launched which sought funding from initial coin offerings (ICO). Not unlike the dot-com bubble of the 1990s, hundreds of millions of dollars were raised by projects with half-baked ideas, and now it seems as though the hens have come home to roost.

According to a report published in July 2018, over 1,000 ICOs had been declared ‘dead’ while bigger projects began to slim down their operations to ensure they remain cost-effective and profitable. 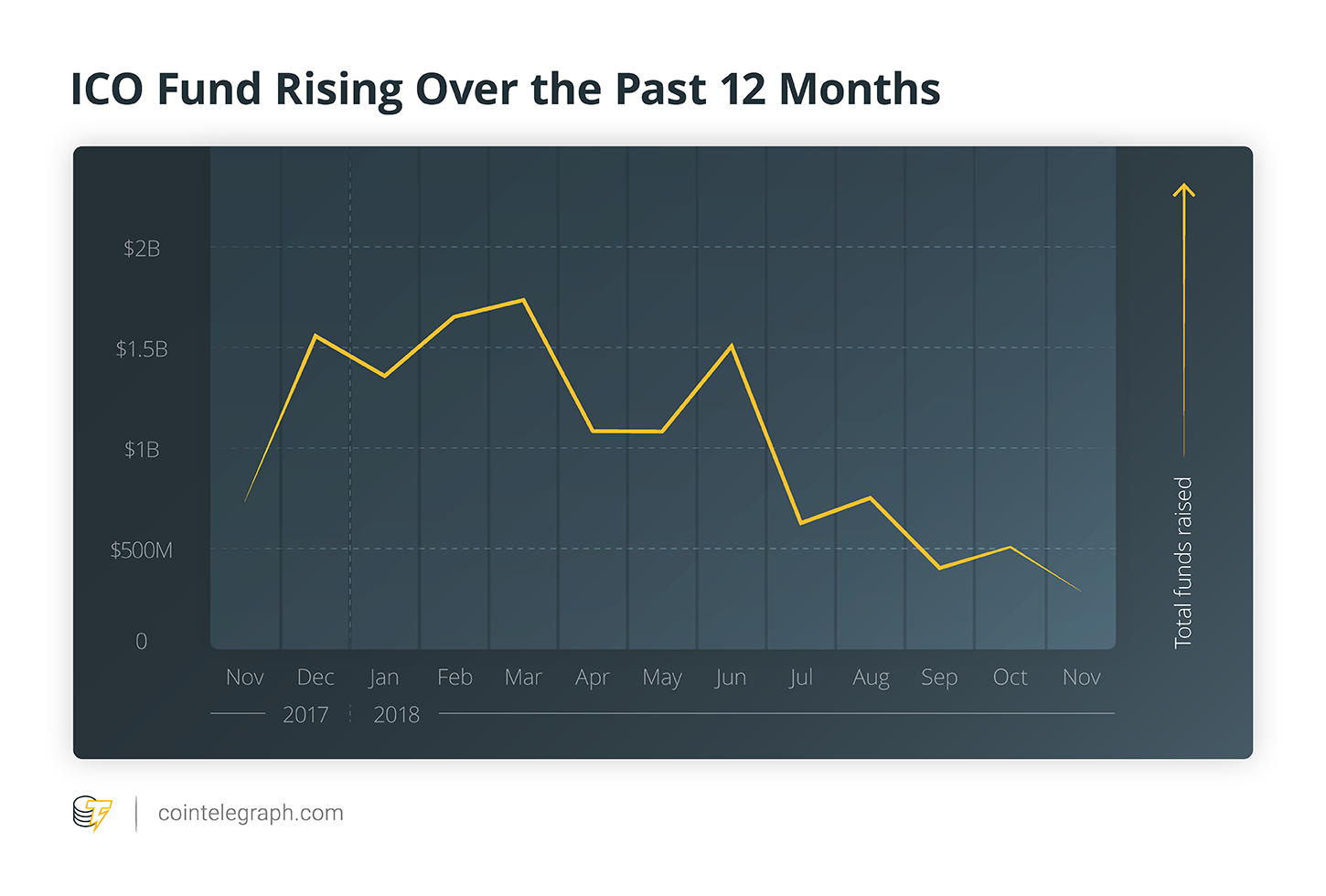 Over the last two months, a couple of businesses have announced that they would be streamlining their operations.

At the beginning of December, a blockchain software startup and incubator ConsenSys headed up by Ethereum co-founder Joseph Lubin, announced plans to restructure its business.

Lubin revealed the plans in a letter to the staff of the company, calling the new chapter in the company ‘Consensys 2.0.’ It reportedly entails a more revenue-driven approach.

“We must retain, and in some cases regain, the lean and gritty startup mindset that made us who we are. We now find ourselves occupying a very competitive universe […] to ‘succeed wildly’ [...] we must recognize that what got us here will probably not get us there, wherever ‘there’ is.”

Given that ConsenSys invests and helps startups building applications on the Ethereum blockchain, Lubin also made it clear that the company would become far more rigorous with projects under their care and wouldn’t hesitate to dissolve projects that may have looked promising at their inception.

As far as staff cuts go, ConsenSys has confirmed that it would reduce its workforce by 13 percent.

As a crypto industry investor Anthony Pompliano summed up in a recent newsletter, Lubin has taken a tough but necessary course action to take control of proceedings in trying times:

“Joe Lubin is a smart, ambitious guy. He has been at the forefront of many technology trends and built one of the most important companies in crypto. While unpleasant, it is encouraging to see him and his team making the hard decisions to put the business in a better position for future growth. Great leaders have to make the tough calls — I’m sure this one wasn’t easy.”

Like Bitcoin, Ethereum has endured a monumental correction from highs above $1,400 in 2017. It is currently trading at around $94.

Cointelegraph has reached out to Consensys for comment but has not received in by the press time.

While ConsenSys is adopting what Lubin has described as a “lean and gritty startup mindset,” other companies have had to take far more drastic measures to downscale their operations.

Social network Steemit announced at the end of November that it would be laying off over 70 percent of its staff as a direct result of the severe market conditions affecting cryptocurrencies across the board.

The decentralized platform, which runs on the Steem blockchain, has felt the pinch alongside the rest of the industry. Steemit CEO Ned Scott addressed the challenges in a video, citing a decrease in fiat currency returns from STEEM sales, the platform’s native cryptocurrency, as well as the running cost of Steem’s nodes.

In addition to the staff cuts, the company is looking at a number of technical changes in order to further reduce running costs.

The harsh market climate has taken its toll, considering that Steem once had a market capitalization of over $400 million in May 2017.

Blockchain, Bitcoin jobs on the rise

Even in this harsh slump, the outlook seems positive for the space in general. According to a LinkedIn study, blockchain developers are in high demand on the platform, becoming one of the fastest-growing emerging jobs in the United States.

Over the past three years, jobs relating to blockchain, Bitcoin and cryptocurrency have been on the rise on LinkedIn.

Facebook, for one, with its chequered attitude toward cryptocurrencies, listed five openings for blockchain-related jobs on its career portal earlier this month. 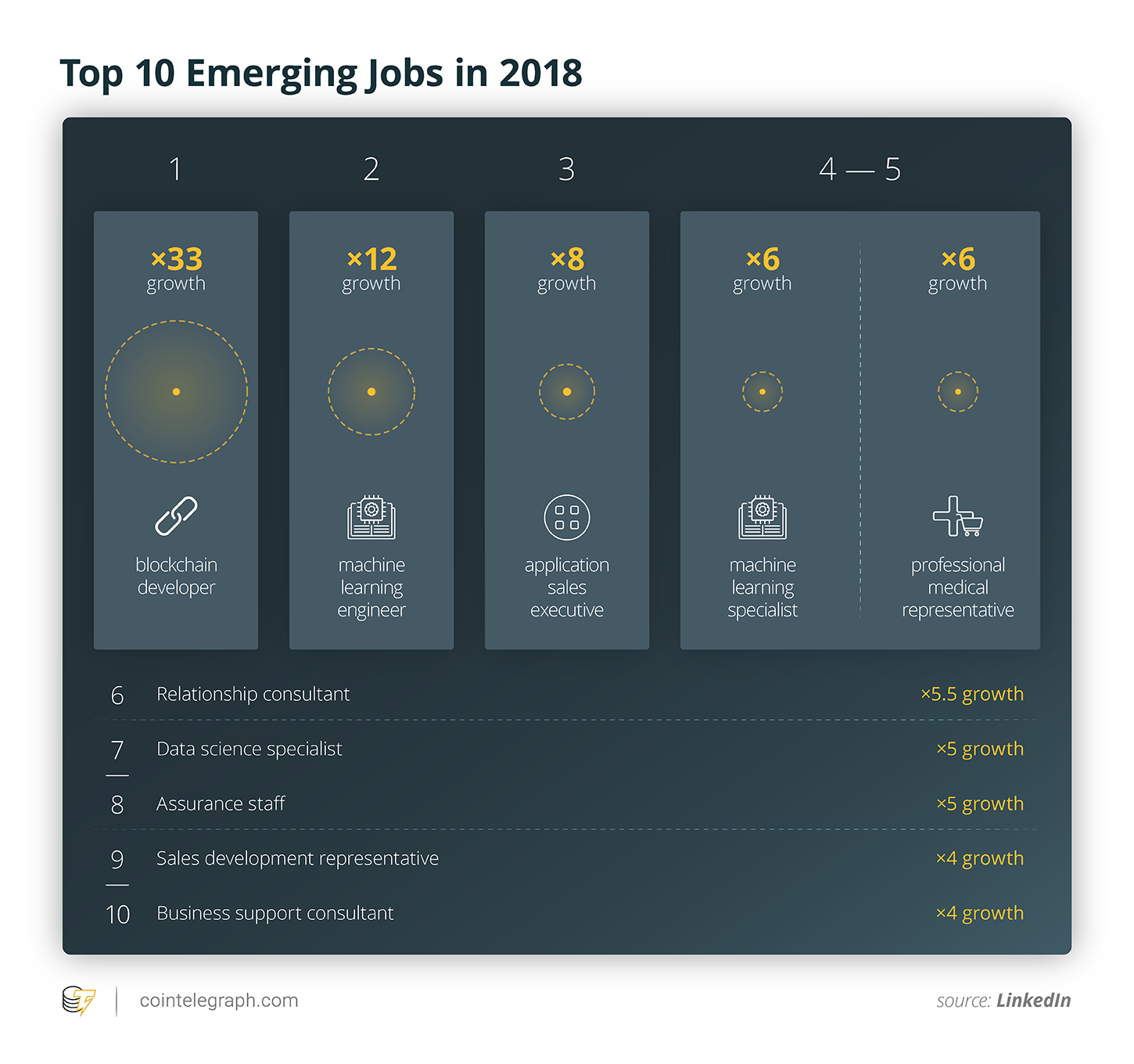 These jobs seem to be extremely lucrative, given the spike in interest in the space over the past two years. Blockchain engineers are said to be earning more than $150,000 a year.

Hired’s “State of Salaries” report also noted a 400 percent increase in demand for blockchain engineers by prospective employers since 2017, all despite the bear market that has dominated in 2018.

According to data from Challenger, Gray & Christmas, an outplacement company, November saw an uptick in the amount of looming job cuts in different industries in the U.S.

As a sign of the times, Challenger cited General Motors move to cut 15 percent of its workforce — which equates to around 14,000 jobs — in October, a move that would reportedly save about $6 billion.

The company’s vice president, Andrew Challenger, believes that data collected by Challenger shows that the current economic climate is not helping matters:

In comparison to more significant job cuts around the world, the current slump in the cryptocurrency markets and ensuring job cuts in associated companies seems relatively benign.

In 2015, The Washington Post published an article that took a look at the biggest job cuts in history by some of the biggest corporates around the world, according to data from Challenger.

IBM’s layoffs in 1993 are still ranked as the highest in history, with 60,000 jobs cut. Citigroup, Sears, Roebuck & Co, and the U.S. Army each cut over 50,000 jobs at different stages, but these job cuts put most others in perspective.

As previously mentioned, one can draw similar parallels between the rise of internet companies in the 1990s and the rise of cryptocurrency- and blockchain-focused companies from 2010 onward.

Mainstream media headlines have often proclaimed the death of Bitcoin and cryptocurrencies over the past few years.

As an article from the Guardian back in December 2000 summed up, the year the dot-com bubble burst saw around 130 internet companies close their doors, leading to around 8,000 job cuts from internet companies. However, those that survived ended up laying the foundation for the cryptocurrency and blockchain industry we have today.