Is Crypto Space Fated to Become Another Dotcom Bubble?

The cryptocurrency craze over the past year saw the prices of crypto tokens rise to tens of thousands of times their original values. And Bitcoin wasn’t the only token to reach its all-time high. Even the prices of altcoins like Ethereum, Cardano, Ripple, Stellar, and NEO were all buoyed to new heights by the increased demand from investors seeking to take a piece of the action. The cryptocurrency market hit a peak of total capitalization of nearly $800 billion in January earlier this year. The market’s meteoric rise had many, especially those from traditional investing, calling the phenomenon a “bubble.” Since people try to make sense of new events using the past, the crypto space has been commonly viewed through the lens of the “dotcom crash” in the late 1990s- the early 2000s. Hundreds of companies met their ends in the aftermath of the so-called “dotcom bubble.”

So, is the crypto space headed down a similar path?

The crypto space can still be considered a frontier. Blockchain, as a technology, is only starting to see wider, gradual, adoption. There are still a few regulations to keep ventures and participants in check. The market trades heavily on speculation. Most projects behind crypto tokens have even yet to actually show or deliver definitive real-world value.

It seems to be difficult to pin down the basis of what’s driving the performance of cryptocurrencies. Support can shift easily from one project to another even if there isn’t much fundamental basis for a token’s sudden climb.

It’s also tough to anticipate how certain events would impact the market. For example, many would have expected for China-based blockchain projects to have a hard time considering the country’s ban on initial coin offerings (ICOs). This ban, however, appears to have been quite advantageous for ventures like NEO. Since the platform’s launch preceded the ban, it essentially avoided being used by scam projects that have emerged. Support for the project is growing, and NEO’s social hype and price movement even showed resilience when Bitcoin dipped.

Economic bubbles are formed when assets are being traded at prices that are significantly more than their intrinsic values. The crypto market’s highly speculative nature has definitely contributed to the overvaluation of a number of cryptocurrencies. Joke currency Dogecoin, for instance, has a market capitalization of over $323 million at the time of writing. It even reached over a billion dollars at its peak – an astounding achievement for a project meant to be nothing more than a parody.

So, by traditional definitions, there are bases to call what’s happening to cryptocurrencies a bubble. As such, it’s only natural and considerably fair to compare it to the dotcom bubble since it’s the most recent one that involved disruptive technologies. Both have displayed similarities in the buildup of events.

Arrival of disruptive technologies. The emergence of accessible personal computing, commercial internet service providers, and better web browser technology created a consumer market for internet companies. Internet adoption in the 90s also experienced rapid growth. As for crypto, Blockchain has been around for longer prior to this cryptocurrency boom. Use of distributed ledger technology had been proposed from more than a decade back. It was only until recently with the buzz surrounding Bitcoin and the introduction of platforms like Ethereum that it found more applications. Traditional institutions legitimized the technology by embarking on Blockchain projects themselves.

Explosion of ventures. Both events featured the sudden explosion of projects and ventures looking to capitalize on the technology. Hundreds of companies were founded during the dotcom craze. In 1999, there 457 initial public offerings (IPOs) most of which were tech companies. In March 2000 during the market’s peak, there were 4,715 companies trading on Nasdaq. The crypto industry is experiencing something similar with ICOs. In 2017, CoinSchedule logged 210 ICOs, up from just 43 in 2016. These ICOs raised more than $6 billion in funding. In 2018, there have already been more than 70 token sales so far. 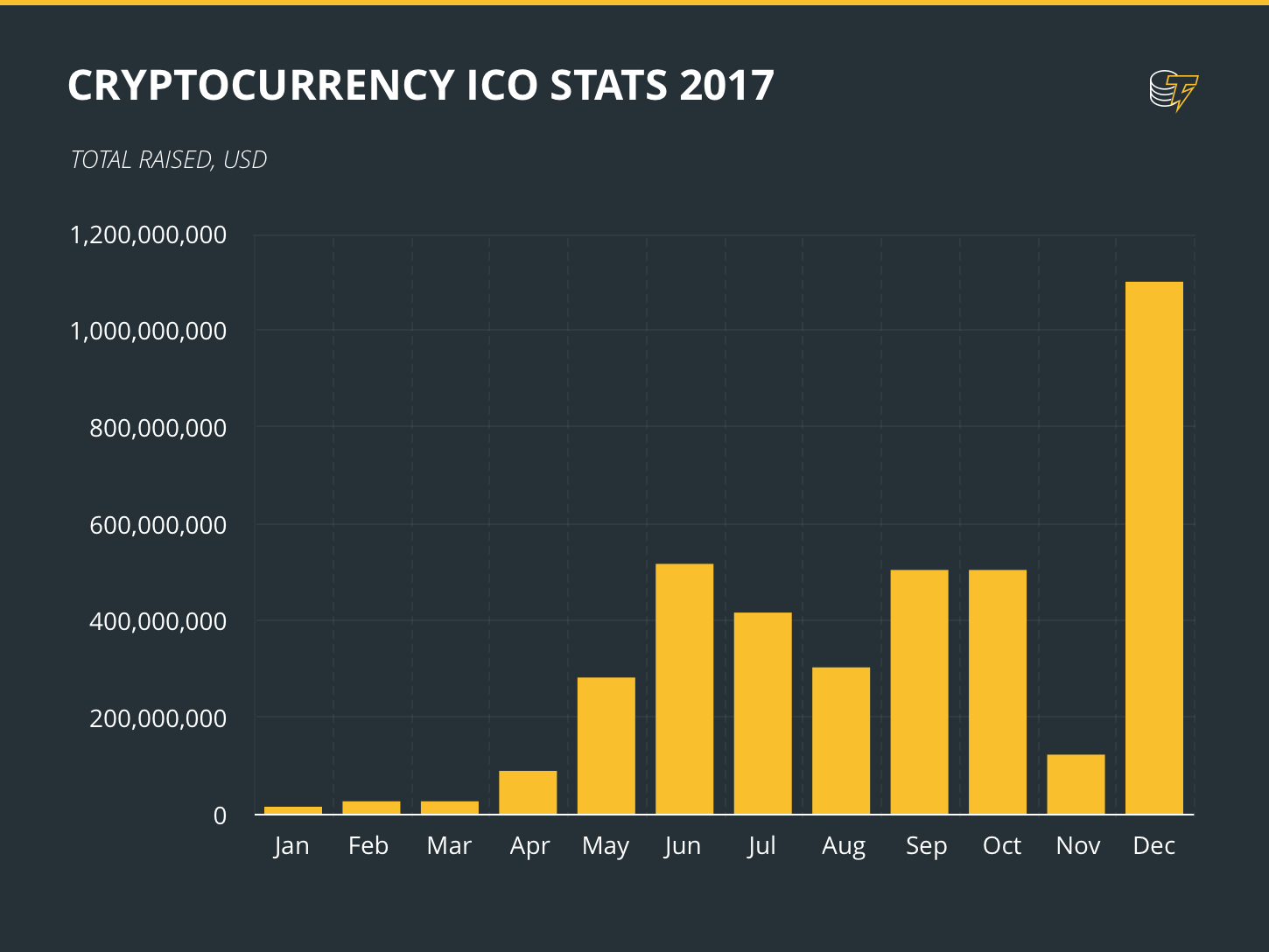 Sharp climb in stock/token prices. Internet company share prices skyrocket while the dotcom industry was developing. Of the IPOs in 1999, 117 companies doubled their share prices just on the first day of trading underscoring the exuberance of the market. Nasdaq peaked in March 2000 hitting an intraday high of 5,132. Crypto tokens display even more gains. It isn’t uncommon in the crypto market to see tokens rise to hundreds of times their ICO prices in just a matter of months. These are the patterns that lead many to believe that crypto’s trajectory is the same. The dotcom bubble burst sometime in 2002. Nasdaq bottomed out in September of 2002.

Recent events seem to tease something similar. February of this year was met by a massive correction that saw Bitcoin’s price tumble down to the $6,000 mark. Other coins also took major hits. The total market capitalization dropped by more than 60% from the peak to around $265 billion. Many thought that this was the bubble bursting. Analysts even warned that Bitcoin would go below the $1,000 mark. Token prices have been pretty volatile throughout March and haven’t found a bottom for the time being.

Lessons to Be Learned

“So, the real question is not: are we in a bubble? But rather, how big will the bubble get? If we respect the natural evolution of disruptive technology, then we must understand that with every massive speculative run-up, there is an equally massive crash. From the tulip bubble of the 1600s to the Internet bubble only 15 years ago, the crashes are inevitable. Thus, the question is, what can we learn from past bubbles, and how much can they guide our actions within the cryptocurrency market?”

The case of Pets.com, the poster child of what went wrong during the dotcom era, should contain plenty of lessons for crypto stakeholders. The arrival of the internet encouraged companies to pursue direct-to-consumer e-commerce efforts. Pets.com sought to sell pet accessories and supplies much like how Amazon sold books through an online channel. The company was also able to attract venture funding that bumped up its valuations.

However, it had a poor business model and had no independent market study to ensure its sustainability let alone its profitability. The company failed to make ends meet. Trying to absorb the high shipping costs of heavy pet supplies like pet food and cat litter was clearly more than an oversight.

The crypto space is already seeing similar poorly-planned me-too ventures emerge. It seems like companies are trying to tokenize everything using Blockchain not to be minding if the technology is mature enough to handle a particular use case or if these ventures’ targeted verticals have any real need for the decentralized technology.

However, Blockchain ventures can’t be taken in exact comparison. Here are some key differences in how they operate:

Zero to minimal logistics. A lot of dotcom companies were forced to balance running both online channels and physical fulfillment. Many found themselves overwhelmed by logistics like the case of Pets.com, eToys, and Webvan. Blockchain projects deal with mainly digital transactions and tokenized assets. Unless the venture seeks to omnichannel or brick-and-mortar presence, most services interaction layer, there are minimal logistics concerns.

Smaller workforce. Since many dotcom companies had to deal with physical fulfillment, they had to hire all sorts of manpower to deal with warehousing and logistics on top of their development, sales, and marketing staff. Most blockchain teams are lean and mean. Most can even easily operate remotely lessening the need to put up physical offices and infrastructure.

Comfort with technology. Market-wise, crypto ventures also have demographics on their side. Dotcom companies had to deal with technological migrants in the boomers and Gen Xers forcing them to allot resources for client education and after-sales support. Millennials are now the dominant demographics. Participants in the crypto market are now comfortable using digital channels for big-ticket transactions.

While it is only prudent and smart for anyone entering the crypto space to proceed with caution especially when it comes to trading and investing in crypto assets, it would be unfair to be totally dismissive of what the Blockchain technology has brought about. The parallels with the dotcom bubble should serve as lessons to stakeholders.

One must remember that the aftermath of the dotcom bubble also affirmed that truly innovative organizations and technologies could weather the storm. Companies such as Amazon and eBay proved that pairing novel ideas with good business acumen can lead to success.

Surely, the situation today with crypto and the environment of dotcoms from nearly twenty years ago would have their differences. Ventures must be able to navigate these nuances in order to make the best possible decisions moving forward. Whether or not crypto ventures will share a similar fate to dotcoms remains to be seen. At least for now, crypto stakeholders have a chance to write a different story.