Bitcoin and Ethereum Show New Momentum After 20% Gain, Is a New Rally in the Works?

As Bitcoin recovered to over $5,200, the crypto market has found new momentum, pushing others like Ethereum to recover.

Year-to-date, the price of Bitcoin (BTC) is up 40% against the United States dollar, and other major cryptocurrencies such as Ethereum and Litecoin have also demonstrated strong gains in the past four months.

Performance of crypto assets in the past month. Source: coin360.io

Litecoin, for instance, recorded a staggering 208% increase in value since January — outperforming most crypto assets apart from a handful, including Binance Coin and Enjin Coin. 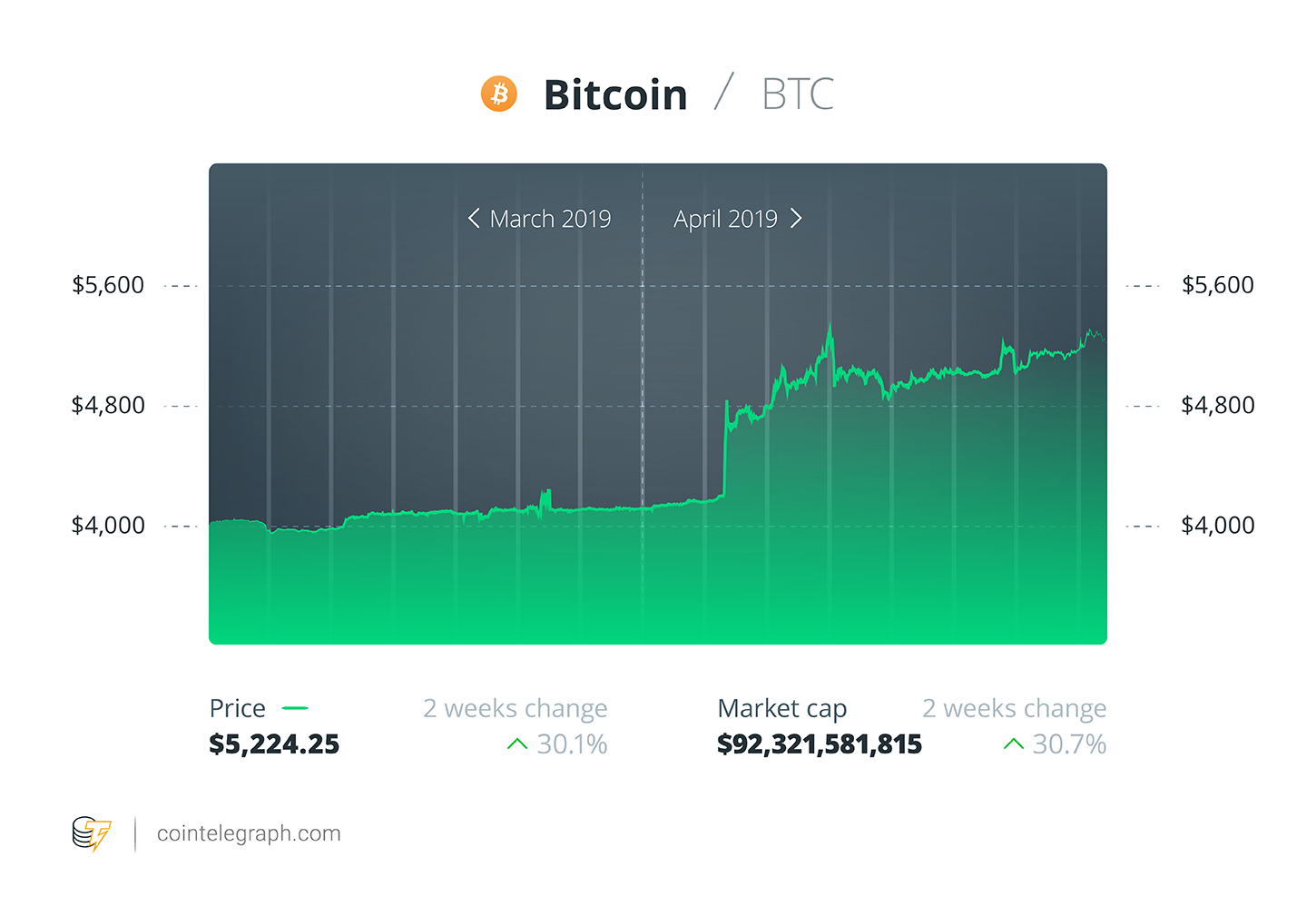 After experiencing a slight retracement, Bitcoin along with Ethereum and the rest of the cryptocurrency market are showing signs of new momentum, with BTC recently breaching $5,200. 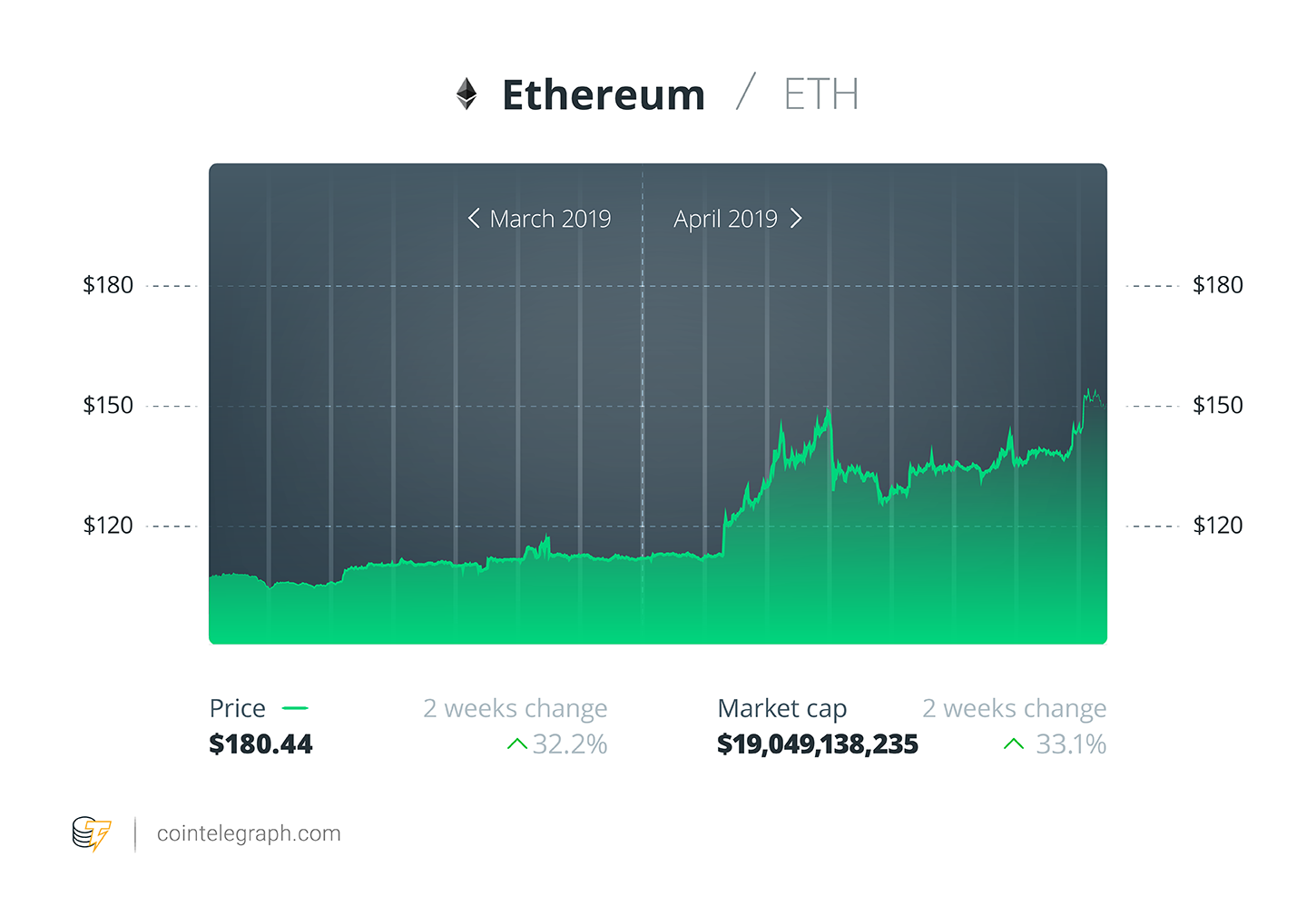 What caused the initial rally on April 1?

The rally of Bitcoin in the first week of April is said to have been triggered by four major factors:

The $4,200 resistance level has been a roadblock for the near-term recovery of Bitcoin since January, and every attempt to break out of it led the price of BTC dipping below $4,000. As soon as the crucial resistance level was breached cleanly for the first time in 2019, Bitcoin began to move up rapidly toward $5,000.

But, one potentially overlooked factor in analyzing the price trend of Bitcoin in the beginning of April may have been the dominance of Bitcoin futures markets based in the U.S.

Due to the relatively small volume of major futures markets such as CME Group, the impact of futures on the price trend of Bitcoin was believed to be minimal by many.

Danny Les, a former hedge fund manager, told Cointelegraph in February that the downside movement of Bitcoin two months ago was not likely to have been affected by futures:

“I don’t think futures closing made a difference. Just like when the CME Bitcoin markets kicked off and everyone expected it would have a huge effect on price. It didn’t. Same applies here as far as I’m concerned.”

However, on March 22, Bitwise Asset Management disclosed in its presentation to the U.S. Securities and Exchange Commission (SEC) that 35% of Bitcoin trading volume in February was processed through CME and CBOE futures.

“And, when you remove fake volume, CME and CBOE futures volume is significant ($91M), especially compared to the real spot volume (35% for Feb 2019). This is good news because it means CME — a regulated, surveilled market — is of material size, which important for an ETF.”

From March 4 to 8, Binance, the world’s largest cryptocurrency exchange, processed $110 million worth of Bitcoin trades. In the same time frame, according to Bitwise’s report, CME and CBOE processed $91 million.

At least until March, the volume of Bitcoin futures markets in the U.S. neared that of the Bitcoin volume of the biggest exchange in the global cryptocurrency market.

In the future, with CBOE’s reported pullout from the Bitcoin futures market, the share of the futures market in the volume of BTC could change, but in the general scheme of things, Bitwise has shown that futures markets can no longer be dismissed when analyzing the price of Bitcoin.

What can stimulate the next rally?

The liquidation of short contracts and the large volume coming from U.S.-based futures markets were crucial in fueling the momentum of Bitcoin in early April, acting as near-term price catalysts.

Bitcoin has not been in the $5,000 region since early November, and pushing through September and October levels in the $6,000 to $7,000 range would require proper fundamental and technical factors to gain new momentum.

Purely based on fundamentals, the block reward halving of the Bitcoin network that is expected to occur in May 2020 could have an impact on the price of the asset in the near-term.

Historically, as several analysts suggested, the price of Bitcoin has tended to increase in value about a year before its halving.

Historical data shows that about a year before the halving, the cost of Bitcoin starts to go up.

In 2012 and 2016, the exchange rate occurred 376 and 320 days before the halving of the miners reward.#cryptocurrency #bitcoin #btc #Trader #crypto #trading $btc pic.twitter.com/i1SQVBYXy7

Arguments against the halving theory certainly exist due to the rising mainstream awareness of Bitcoin and its halving mechanism. The main argument is that, because halving is already anticipated by investors, it may not have a noticeable effect on the price.

But, Bitcoin is nearing its fixed supply of 21 million and the restriction the halving would put on the circulating supply of the asset is highly likely to affect the price of the asset, especially if the demand remains at the current level or even rises in the months to come.

So far, 84% of the fixed supply of Bitcoin has already been issued, and several reports from firms such as Chainalysis have shown that a few million BTC could be lost permanently.

In late 2017, Fortune exclusively reported that 4 million BTC is estimated to be lost permanently, possibly from hacking attacks, loss of private keys and many other reasons.

At the time, Kim Grauer, a senior economist at Chainalysis, said that it is difficult to conclusively state that the lost BTC is priced into the market because the projected market cap of Bitcoin does not consider BTC that is out of circulation:

“That is a very complex question. On the one hand, direct calculations about market cap do not take lost coins into consideration. Considering how highly speculative this field is, those market cap calculations may make it into economic models of the market that impact spending activity. Yet the market has adapted to the actual demand and supply available — just look at exchange behavior. Furthermore, it is well known monetary policy procedure to lower or increase fiat reserves to impact exchange rates. So the answer is yes and no.”

Considering the relatively large portion of the supply of BTC and the upcoming halving that would further slow down the rate at which new BTC is mined and would significantly reduce the available supply of the asset, an overall increase in value can be expected.

In many areas, as ShapeShift CEO Erik Voorhees stated, crypto is maturing.

Crypto is maturing. It is now firmly in its adolescence.

Another strong indicator of the growing maturity of the cryptocurrency market is the emergence of independent price movements.

In the past four months, a fairly large number of crypto assets — such as Litecoin, Enjin Coin, Binance Coin, Augur, Ontology, Cardano and EOS — have shown price movements independent from that of BTC.

It is entirely possible that the stability of the dominant cryptocurrency provided investors in the cryptocurrency market with the confidence to take higher-risk opportunities to invest in lower market cap tokens.

Investors also may have found the lower valuations of tokens, most of which fell by 90% to 98% against the USD at its lowest point during the 16-month correction, compelling enough to invest in the market.

Ultimately, for Bitcoin, Ethereum and the rest of the cryptocurrency market to engage in a new rally following an impressive 20% gain in the past week, strong stimuli such as last week’s short squeeze or the investment of nearly $100 million by a single buyer are needed.

One caution of strategists, however, is that Bitcoin may be overbought.

David Tawil, president of crypto hedge fund ProChain Capital, told Bloomberg that, while a positive move is “nice to see,” he would be more comfortable with BTC climbing up gradually to key resistance levels rather than with a big, short-term spike, which may leave the asset vulnerable to a retest of previous levels.

“Certainly, an investor would much rather see a gradual rise with constant floors in terms of downside being established, as opposed to a very, very quick run-up. It could be easy come, easy go.”