Bitcoin is at its most overbought level since its record highs in December 2017, Bloomberg analyst Mike McGlone claims.

Bitcoin (BTC) is at its most overbought level since its record highs in December 2017, Bloomberg Intelligence analyst Mike McGlone claimed in an article published on April 5.

Per the report, Bitcoin’s GTI Global Strength Indicator shows that the coin has not been this overbought since its price neared its record peak of $20,000. Bloomberg also claims that similar patterns in the past have heralded multi-week long downturns. 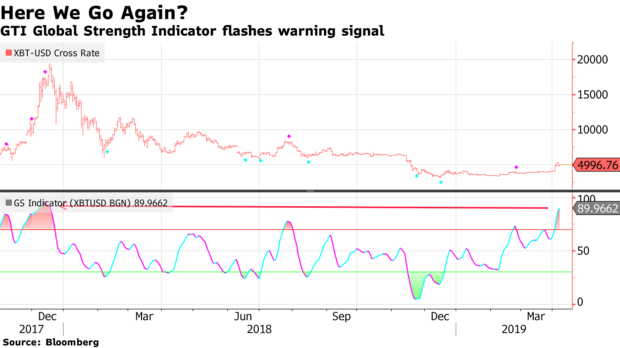 According to McGlone, recent market growth occurred because of long-term price compression and low volatility, which caused the price to be “released from the cage.” McGlone stated that he expects a similar downturn period to follow the recent growth:

“Now it’s a question of duration and I suspect when you have such a massive bubble, you’ll always have an overhang of people who need to sell.”

The article also quotes David Tawil, president of crypto hedge fund ProChain Capital, who reportedly expects the market to continue its downward trend. While he admits that “it’s nice to see a positive move as opposed to a negative move,” he notes that it is not comforting:

“Certainly, an investor would much rather see a gradual rise with constant floors in terms of downside being established, as opposed to a very, very quick run-up. It could easily be easy come, easy go.”

McGlone’s and Tawil’s analysis appear to contrast with that of Fundstrat Global Advisors co-founder Thomas Lee. As Cointelegraph reported yesterday, according to Lee, Bitcoin is back in a bullish trend. Lee pointed out that BTC has now broken over its 200-day-moving-average.

Additionally, trade and author Peter Brandt seemingly disagreed with McGlone, having tweeted on April 5 that he wouldn't be surprised if Bitcoin was to enter another parabolic phase.