Is a big move on the horizon as Bitcoin price is stuck in a triangle and trading volume fizzling out?

Bitcoin (BTC) price is stuck within the descending triangle formation for some time now and slowly moving towards the apex of it. Interesting enough, the apex of the triangle is around the actual launch of Bakkt on Sept. 23.

So is BTC price in a bearish pattern or is it just re-accumulation on a higher level? Let’s take a look at the charts. 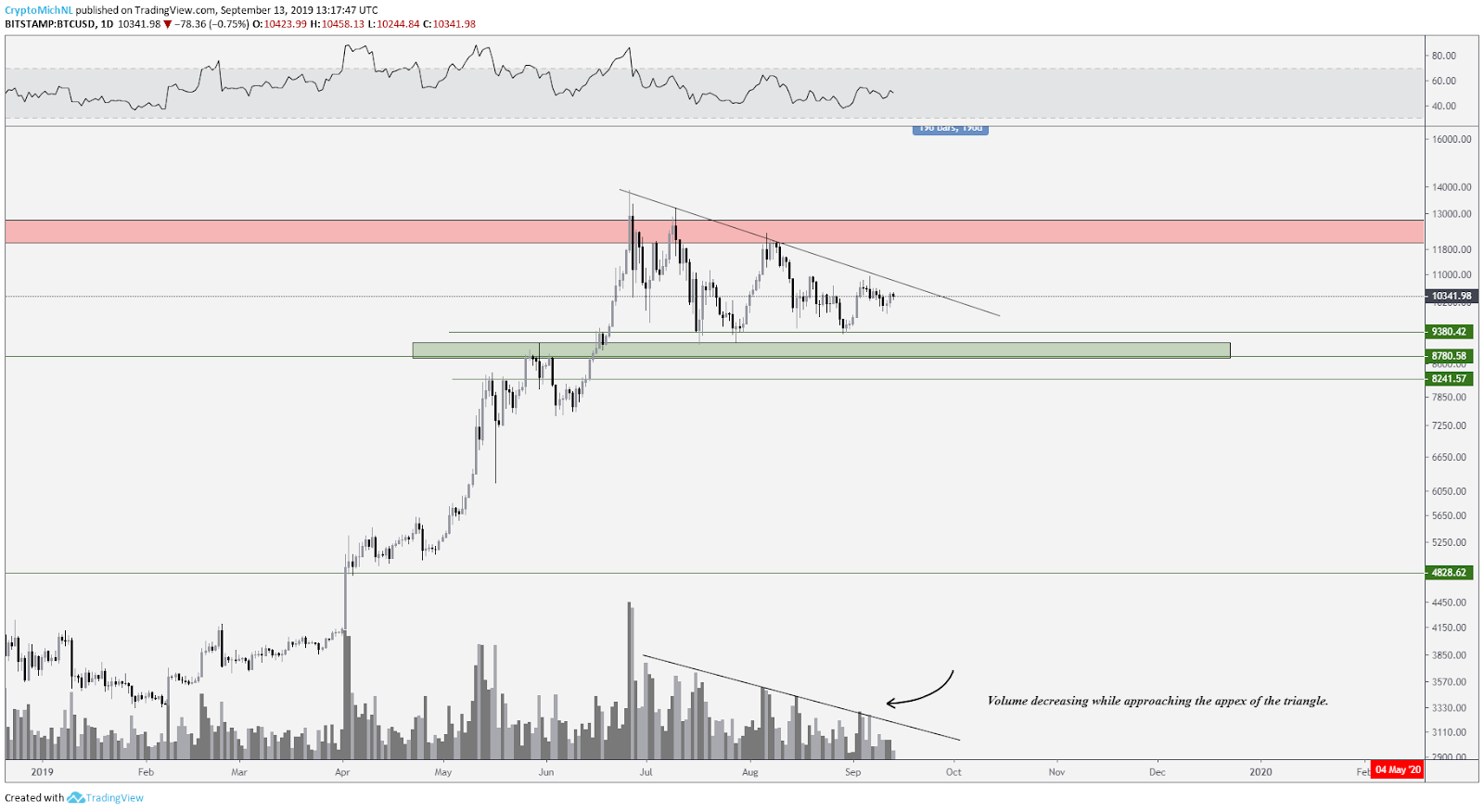 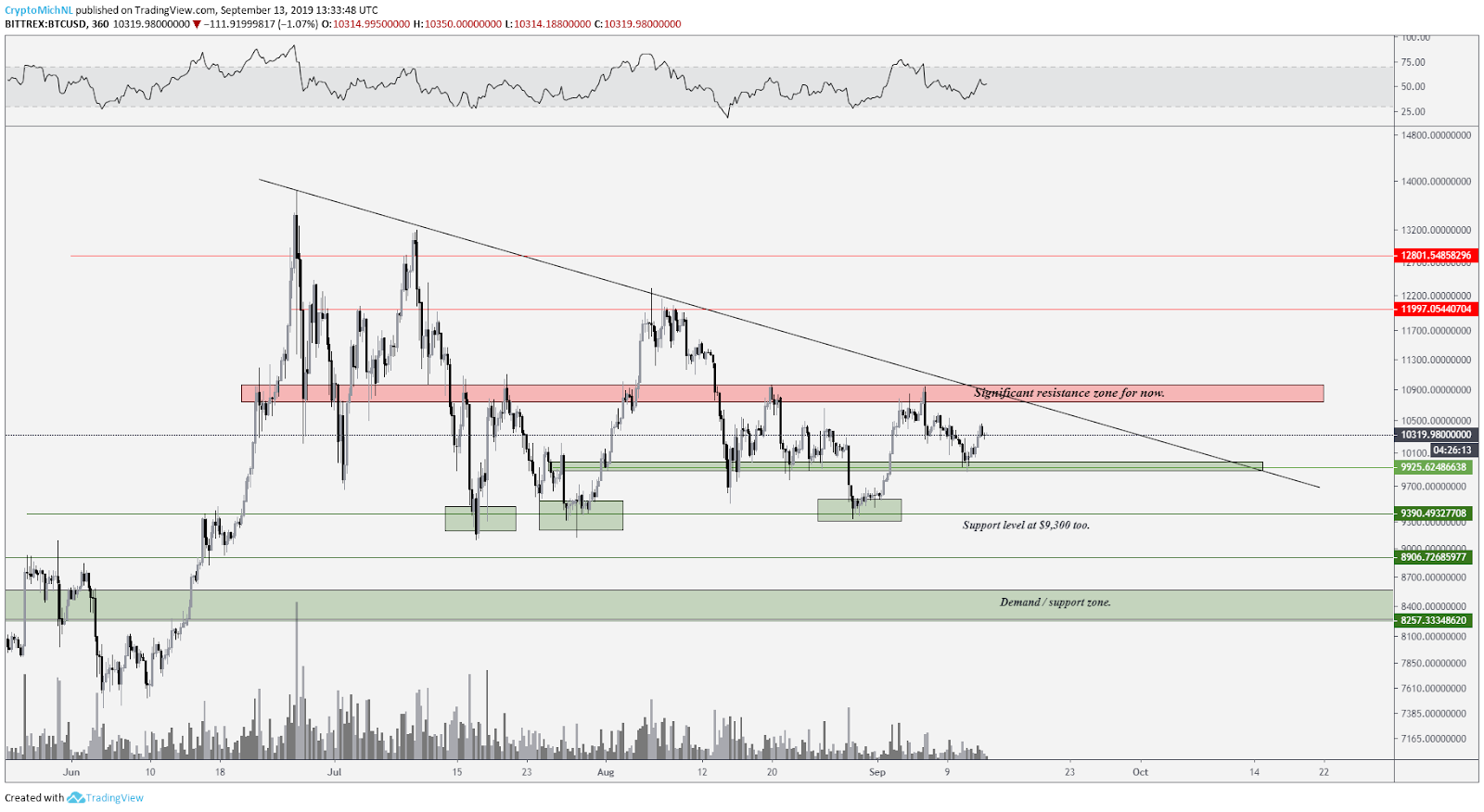 As stated in the previous article, the bullish scenario is still being followed accordingly through the bounce of $10,000. After this bounce, the price is range-bound between $9,900 and $10,600 going towards the climax of the triangle as the volume is fizzling out.

Typically, decreasing volume going towards the resolution point of these patterns has traders generally looking for a breakout and confirmation of direction before entering a new trade. Right now the pattern is range-bound as the market is indecisive on which direction it will break.

It is to be expected that a breakout, either way, will lead to a high volume move of the entire market and that it should take a few weeks more before it occurs. Interestingly enough, the Bakkt launch lines up with the apex of the triangle around Sept. 23. 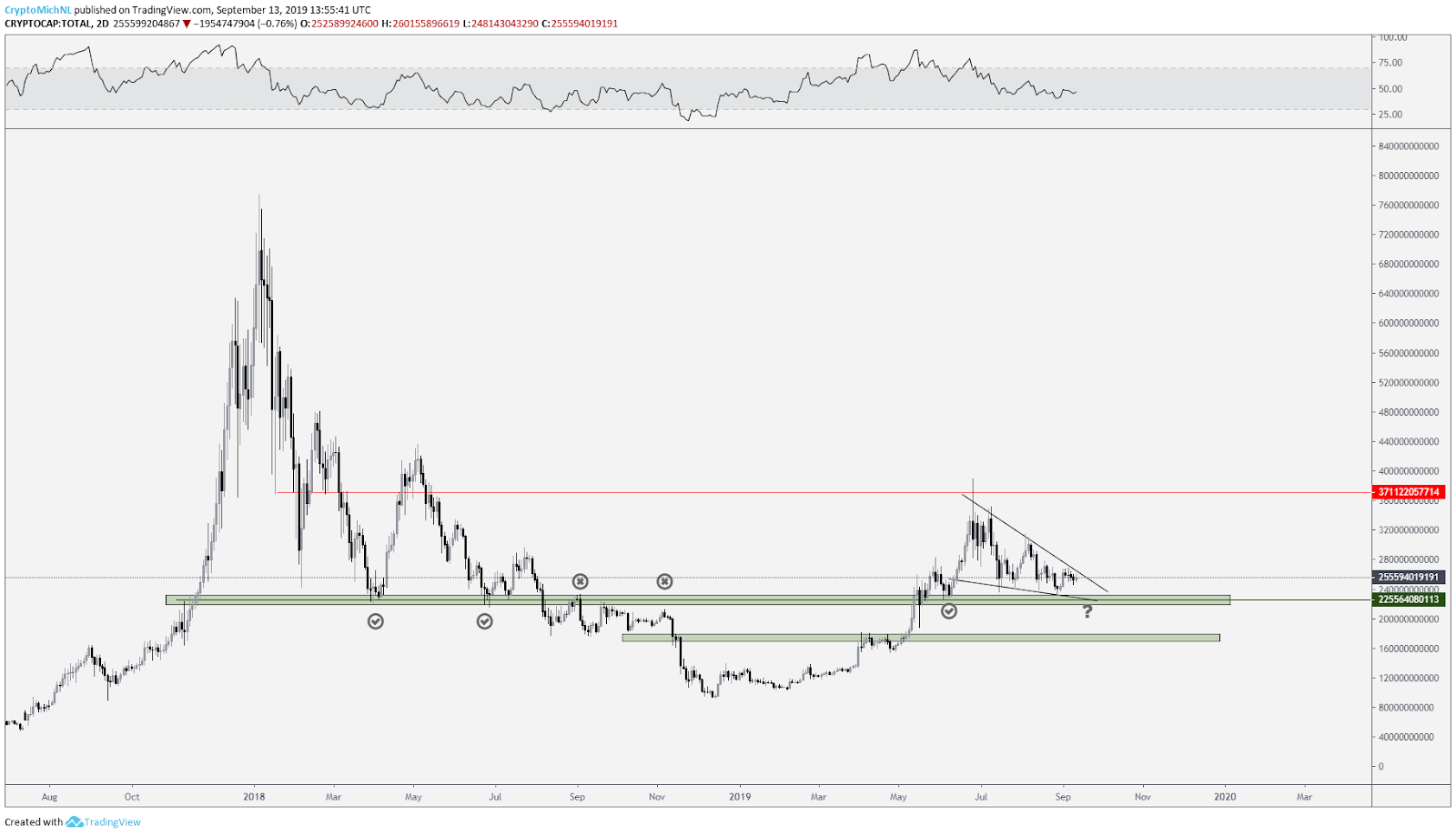 In a complete analysis, it’s necessary to analyze the total market capitalization of the crypto market as well. Though the Bitcoin chart is giving a bearish view through the descending triangle perspective, the overall market cap is not providing evidence of a bearish view.

The chart is giving a falling wedge structure through which the market is retesting an important support level. This level has been the “bouncing ball” in 2018 before a heavy breakdown. If the market is able to reclaim the level as support, an upwards target of $370 billion can be the next move for the market (and the confirmation of a new range).

On the other hand, if the market is not able to keep this level as support, a likely retest of $160 billion is next, and this would take Bitcoin likely down towards the $7,500 level. 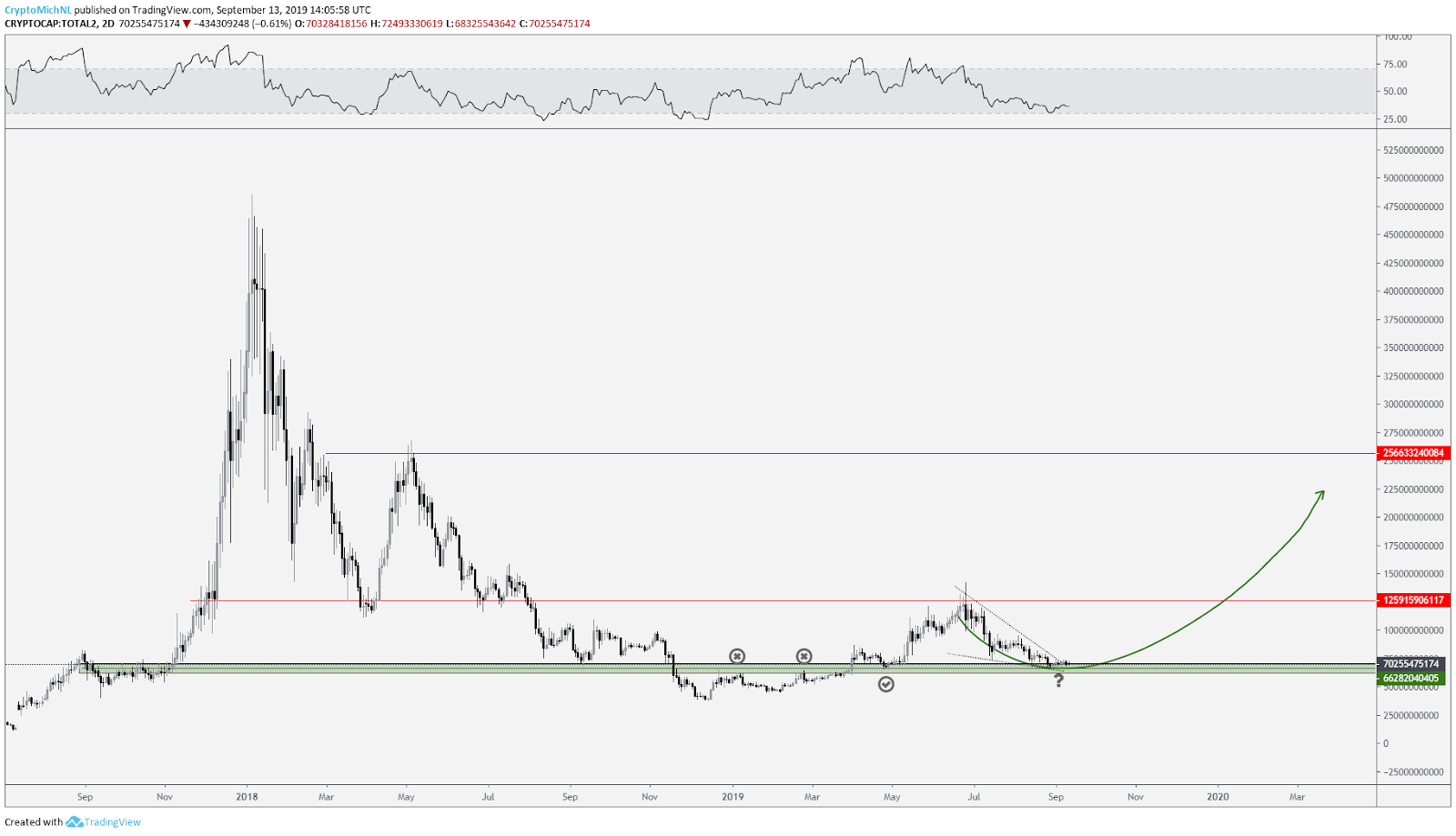 Checking the total market cap without Bitcoin, the same conclusion can be drawn as last week and in the previous section. The altcoin market cap broke upwards above $62-66 billion and currently testing whether this level can become support again.

If the market is able to break upwards, the altcoin market could then target $125 and potentially $250 billion, switching the whole sentiment from ultra bearish (depression levels) towards disbelief and bullish. 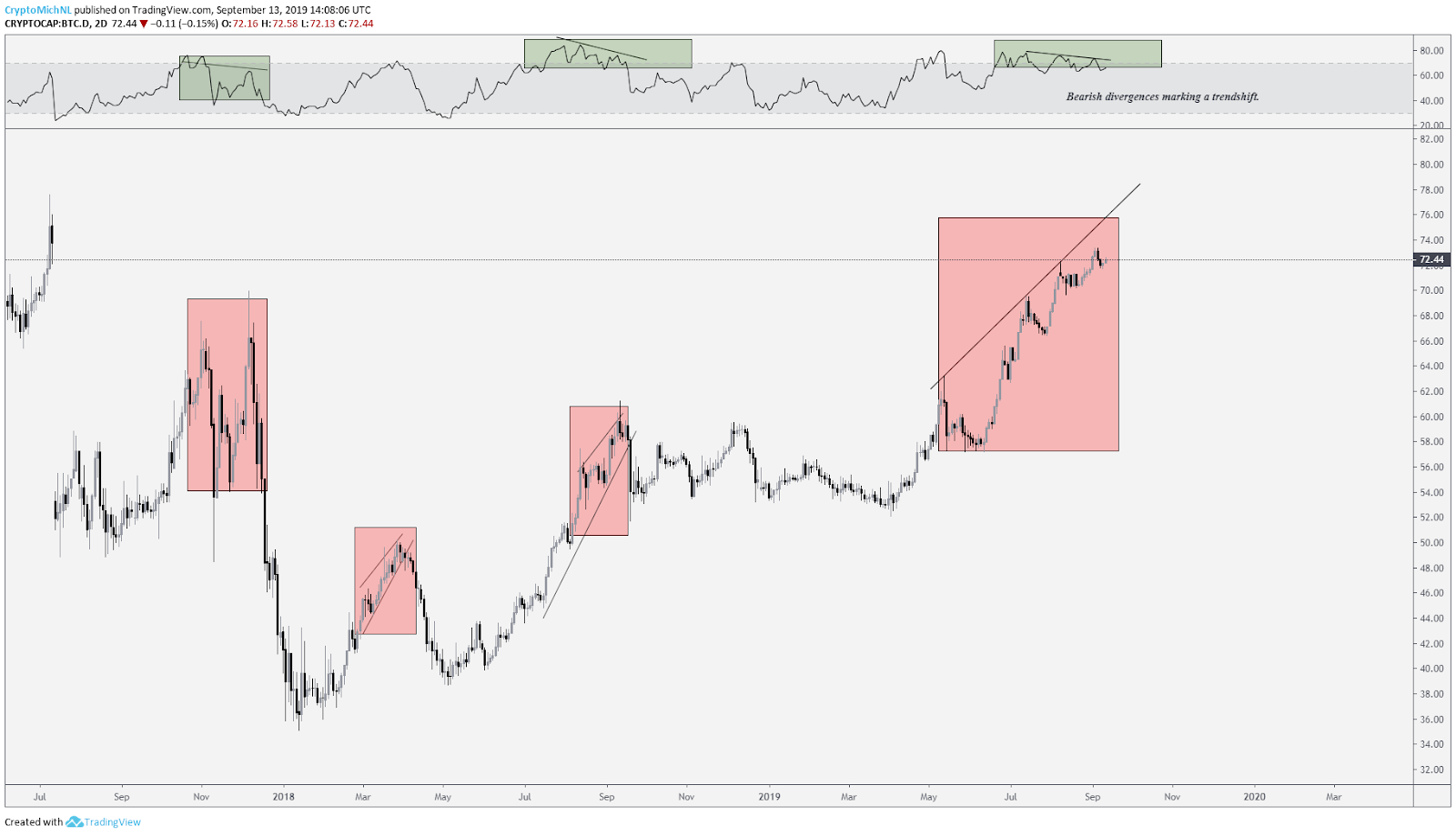 The Bitcoin dominance chart is still showing the same “potential” bearish divergences as the market was showing the past week.

If the Relative Strength Index (RSI) and dominance chart will not show any confirmation next week, a new rally in dominance is still in the cards. The target for a bullish push in the dominance index could easily reach 75-80%. 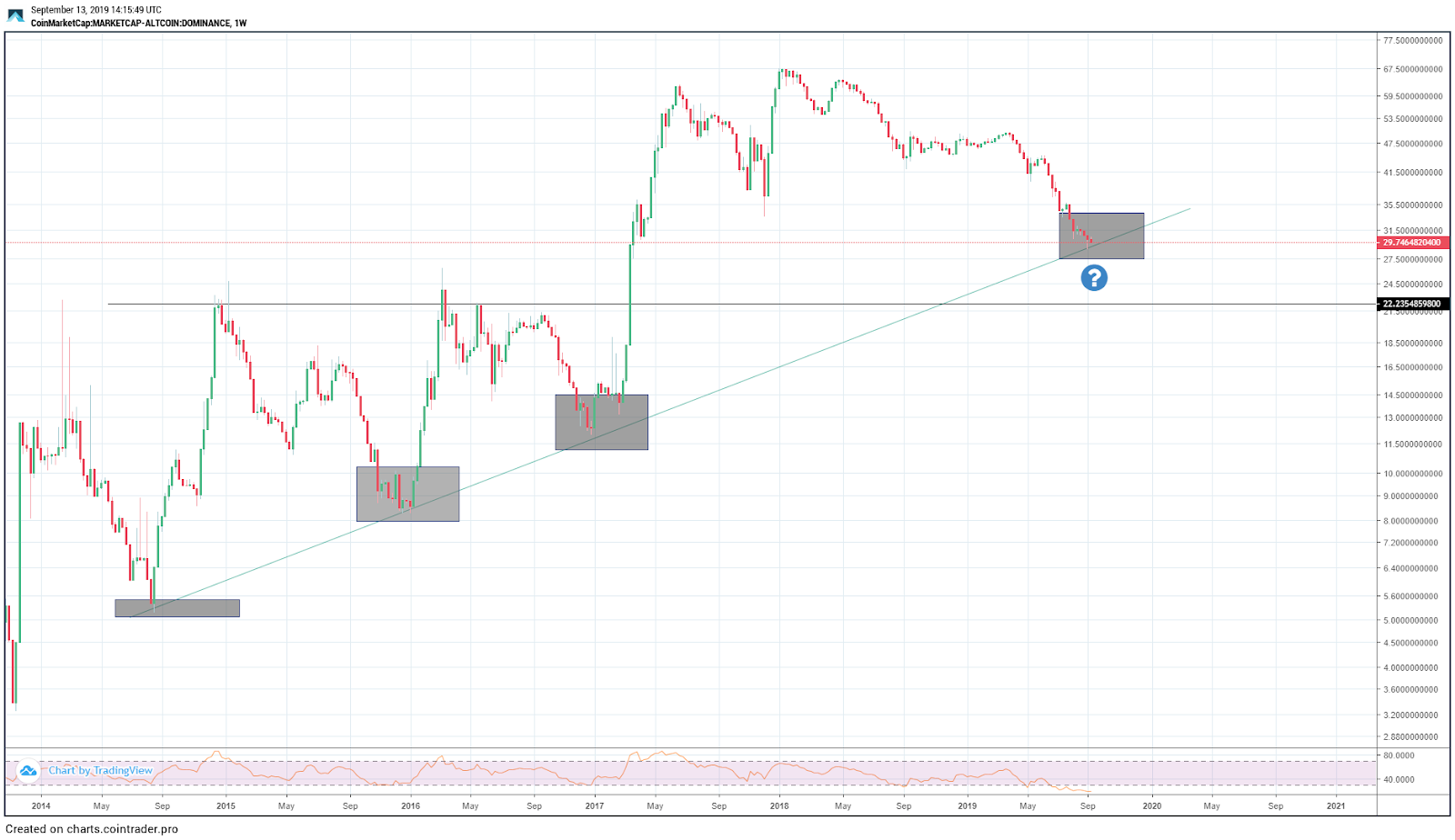 As stated in previous articles, the altcoin dominance is on the edge of the trendline and testing a key level as well.

If the altcoin dominance breaks upwards here (showing the lowest RSI in history and potential bullish divergences on the 3D too), the trendline will remain intact and altcoins will be able to move upwards.

However, losing this trendline and the next level for a potential bounce is the 22% area, which equals 78% of Bitcoin dominance (and in that scenario, the Bitcoin price breaks upwards in a heavy volume move).

In other words, it’s now do or die for the altcoin market.

So, what type of scenarios are there for Bitcoin at this point?

In a bullish scenario, Bitcoin has to maintain the range and stay above support at $10,000 for the coming week. After that, a breakout with high volume above the heavy resistance zone of $10,900-11,000 is required. 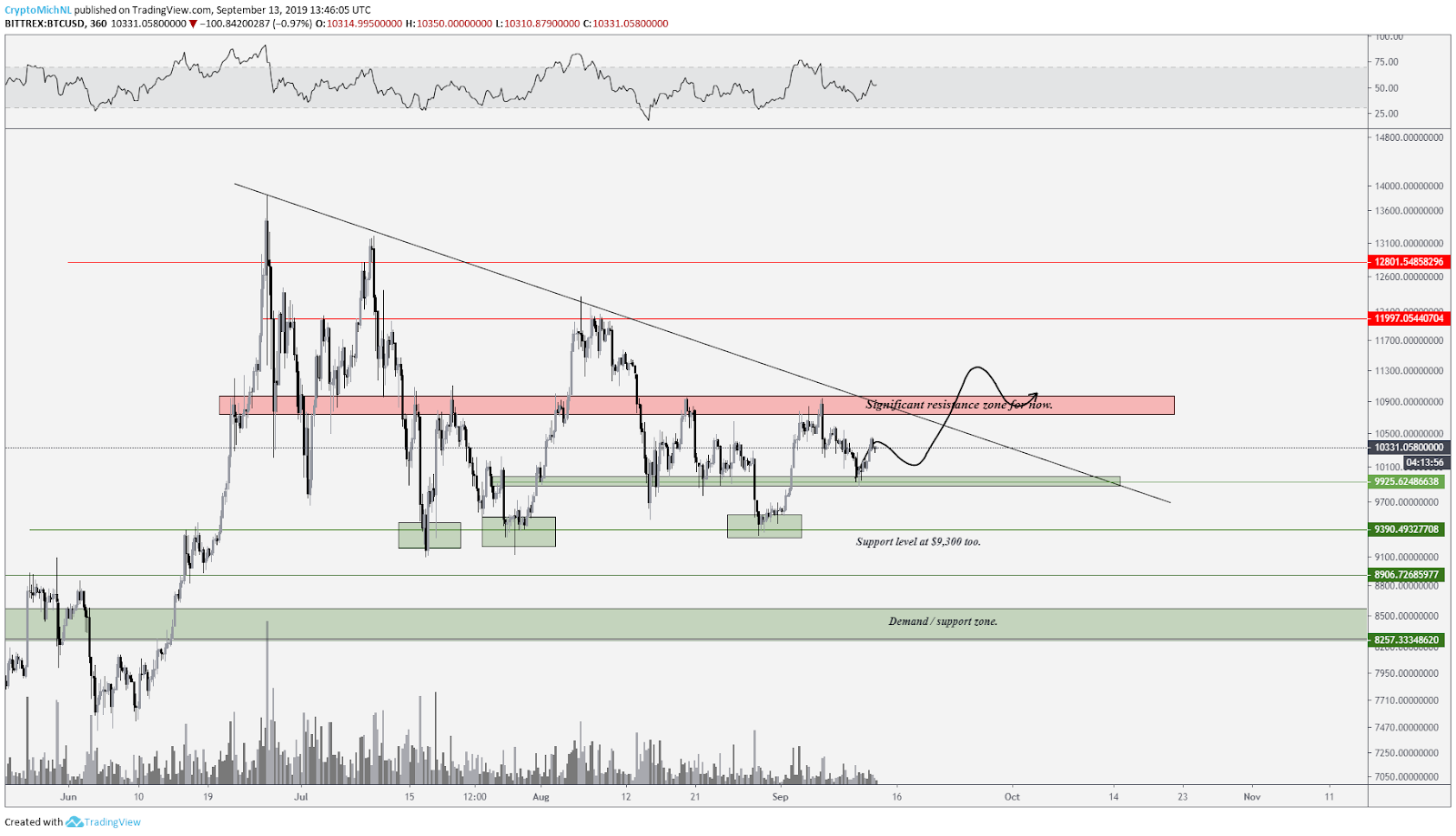 In this scenario, if the price manages to hold the red zone as support, making a required support-resistance flip, BTC price can continue moving upwards attacking the highs of $14,000 and a new impulse wave can be produced.

In that case, altcoins are likely to go up in USD terms, however, the BTC pairs will most likely be crushed once again, given that many people will jump from altcoins to Bitcoin.

In this case, a small descending triangle will be made and the price acts like a “bouncing ball” with the lower highs. 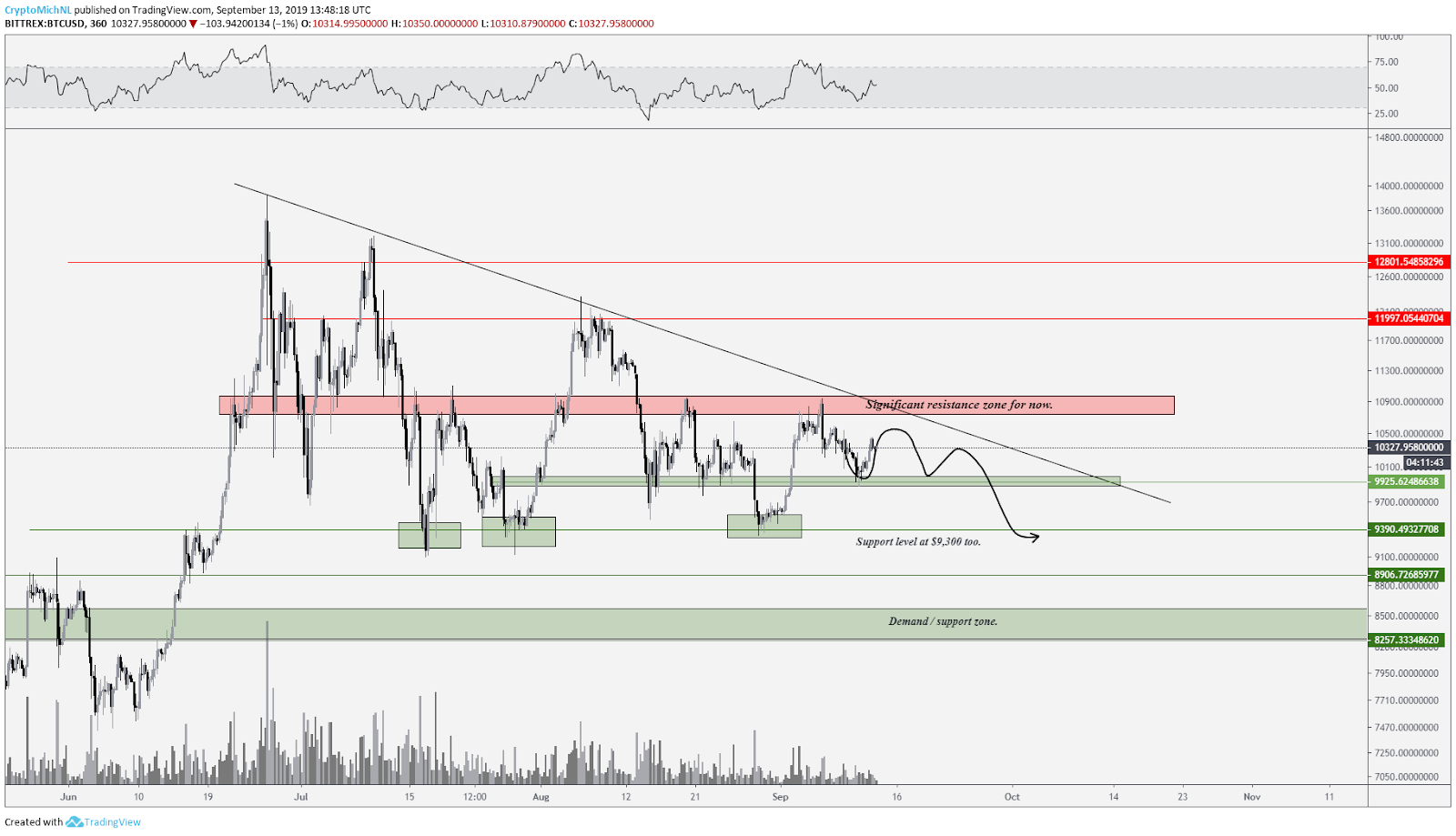 Ultimately a breakdown of the support follows, through which the price will be moving towards the 21 Weekly Exponential Moving Average (EMA) around $9,300, and support of the big descending triangle structure.

It is essential for the market to hold that floor as support and the 21-Week EMA as support since that was the main indicator during the last bull market. Losing the 21-Week EMA will be a big volume move down — like towards the $7,000-7,500 levels (100-Week MA).

All in all, a range-bound market going towards the final stages of the descending triangle pretty much guarantees exciting times ahead.