Bitcoin & US Elections: Surge in Hedges Against Market Decline As Trump Leads

Is the demand for Bitcoin going to rise in the face of a declining market outlook as U.S. elections draw closer with mixed signs? 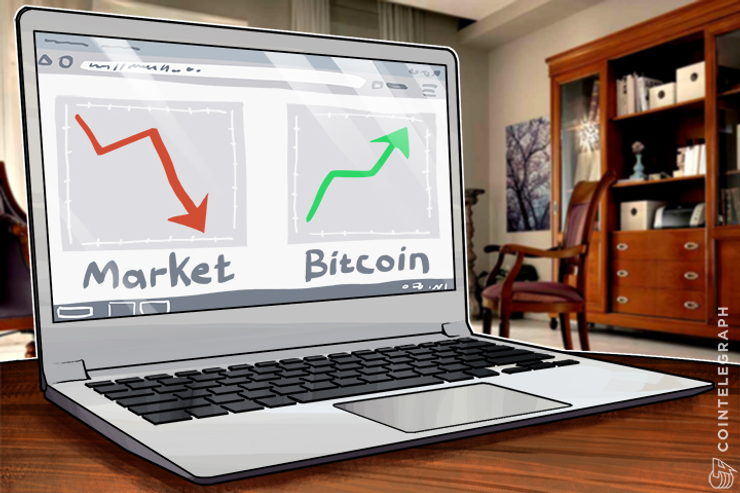 Reports say a tightening U.S. election race has gotten Asian shares tumble to a 7-week lows and the US dollar lost ground against the yen and the euro on Wednesday November 2.

This comes as the Republican presidential candidate, Donald Trump, is reportedly closing the gap with his Democrat counterpart, Hillary Clinton, and money is being forced out of riskier assets and into safe-havens such as the Swiss franc and gold, according to Reuters.

As a growing safe haven alternative to gold and its recent record high in number of users and transactions, Bitcoin is likely to benefit from the current market outlook.

Though there hasn’t been any empirical proof to support the claim of a direct correlation with Bitcoin and its recent corrected price to the slightly above $700 range, the Trump’s candidacy, has been implied to be in tandem with the growing popularity of the top digital currency.

Recently, an academic and author David Golumbia suggested in a blog post that the politics of Blockchain should make people worried about Trump and those who support him, signaling that some attributes of Bitcoin and the Blockchain technology are interfering with the ongoing US presidential election and that a substantial number of Bitcoin users support the Republican candidate. Time will tell if these are mere conjectures or proven.

In the meantime, Britain's FTSE, Germany's DAX and France's CAC have been tipped to fall 0.5% to 0.8% just as the Mexican peso, which posted its biggest fall in two months on Tuesday November 1, extended losses to 19.380 to the dollar to be at its lowest level since early October - Mexicans seem the most wary of a Trump presidency.

This follows the fall of U.S. stocks to its lowest since July, breaking below chart levels that have held for four months. The CBOE volatility index, VIX, often seen as investors' fear gauge, briefly rose to a 2-month high above 20%.

There has been a surge in hedges against a market decline in recent days particularly immediately after reports that the Federal Bureau of Investigation is reviewing files that may be related to an investigation of Clinton’s e-mail practices when she was secretary of state.

Reports say ten of 11 main industries in the S&P 500 fell Tuesday, with real estate and utility stocks leading losses with declines of at least 1.7%. Technology shares, the biggest group by weighting, slid 0.8 percent as Apple and Facebook Inc. dropped more than 1.1 percent.

Aside the presidential politics, other issues that are supposedly fuelling the falling market trend are the indeterminate Federal Reserve rate hikes and coming data on the labour market.

Just as it happened as investors braced up for the results of the U.K.’s Brexit vote, and the recent use of Bitcoin by Chinese people to hedge against the yuan’s weakness amid capital controls, there could be another big jump in the top digital currency based on higher demands in the face of the current outlook.