Can Crypto Exchanges Be Trusted With Hard Forks?

On July 31, a Chinese Bitcoin investor sued local crypto exchange OKCoin for allegedly blocking him from getting his Bitcoin Cash (BCH) after the Bitcoin fork.

While the case is new for China, compilations regarding hard forks and exchanges have been amassing since perhaps as early as the DAO incident in 2016. So what happens when you have a coin that is about to be split into two, but you’re holding it on an exchange’s hot wallet?

Essentially, a hard fork is a change to the cryptocurrency’s protocol that makes previously invalid blocks/transactions valid — and vice versa — and therefore requires all users to upgrade to the latest version. In other words, a hard fork splits the path of the asset’s underlying blockchain, wherein the upgraded, separated blocks start following new sets of rules. Simply put, it’s the equivalent of a ‘reset’ button. There’s also a soft fork, which entails a change of protocol as well, although such forks can still work with older versions.

Why launch a hard fork at all? Basically, it can be initiated to correct security risks found in older versions of the software, to add new functionality or to reverse transactions. The latter, for instance, was the reason for the infamous DAO hard fork, which will be described in greater detail in the next section. 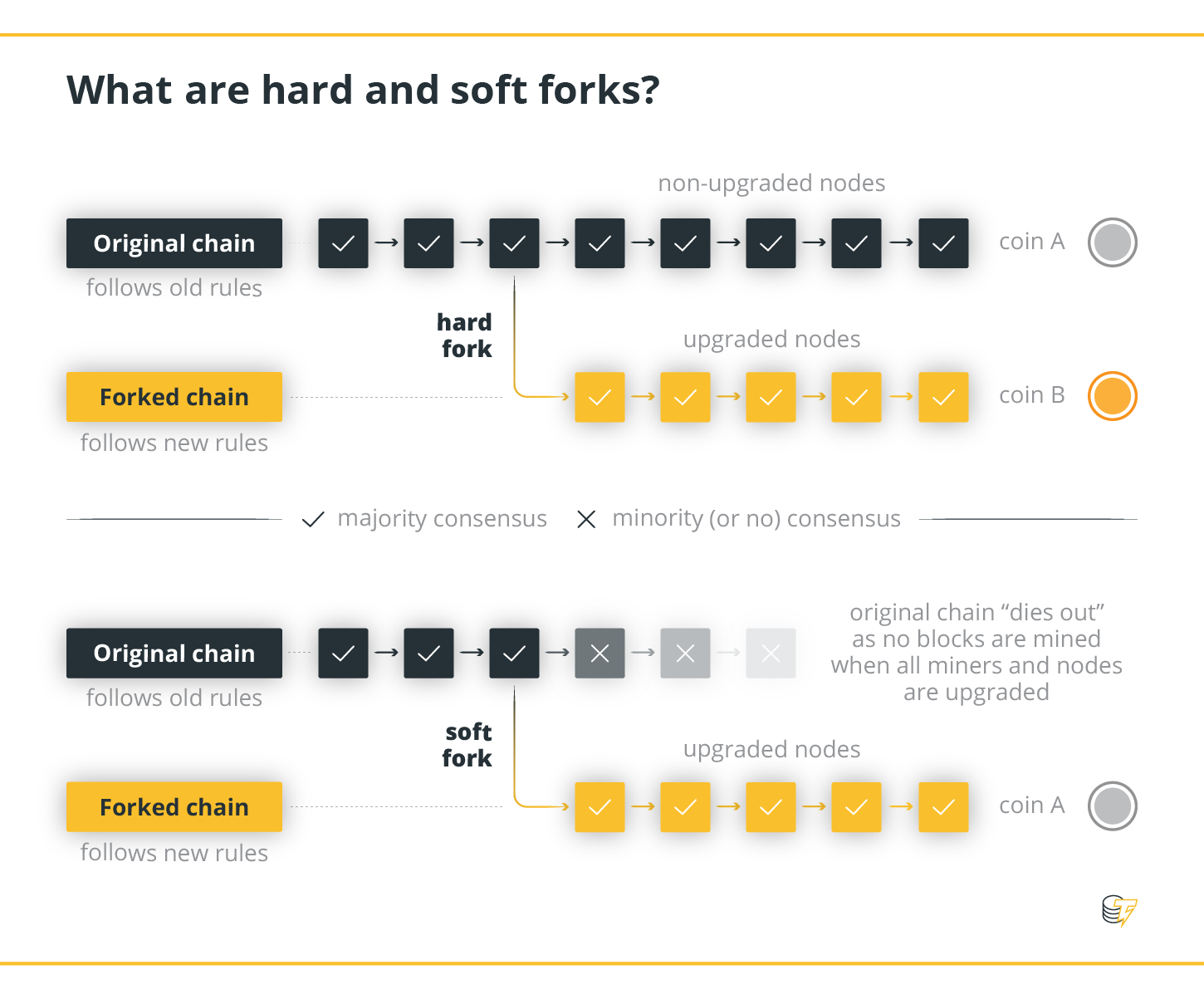 According to data obtained from Forkdrop.io, there are currently 116 forks, 74 of which are affiliated with Bitcoin. There are major ones, like Bitcoin Cash (BCH), Ethereum Classic (ETC) or Bitcoin Gold (BGD), that compete with the top coins and are commonly listed on the largest exchanges — they rank 4th, 12th and 24th respectively, as per Coinmarketcap. There are also smaller ones that are worth just a few cents, and are hence less likely to be featured on large platforms. Charlie Lee, the creator of Litecoin who previously worked at Coinbase, described how the platform would approach forks in the past:

The DAO example: To fork or not to fork?

The DAO was set up in April 2016 as a decentralized autonomous organization. Its purpose was to invest in other businesses, making it a form of an investor-directed venture capital fund, powered by smart contracts. The prominent project swiftly gathered a record-breaking $120 million in Ethereum (ETH) during the fundraising stage.

However, in June, some users exploited a vulnerability in the DAO code that allowed them to drain one-third of the DAO's funds (roughly $50 million) to a subsidiary account. It wasn’t a hack, per se, as the attackers simply found a loophole in the coding — as one of the alleged participants soon declared, he merely used the possibilities of the DAO code.

That lead to a debate in the community, where members effectively took two sides: Some argued that the vulnerability was unfair and their funds should be given back, while others opined that the whole purpose of a smart-contacts-based system is its inviolability and, hence, no manual adjustments should take place. The community voted in favour of the refund (the results can be seen here), and the Ethereum team performed a hard fork. The hacked funds were sent to an account available to the original owners. The token owners were given an exchange rate of 1 ETH to 100 DAO tokens, as per the initial offering conditions.

However, the part of the community that rejected the intervention and favored immutability decided to keep using the unforked version of Ethereum: Ethereum Classic (ETC). ETC held on to the existing Ethereum blockchain and did not implement the hard fork code to ‘undo’ the DAO attack. As the project's website explained, “Ethereum Classic intends to keep the original censorship-resistant Ethereum going” and “provide an alternative for people who strongly disagree with DAO bailout.”

Therefore, all people who held ETH at that point received the right to claim the equivalent amount of ETC — to do that, they had to access MyEtherWallet and upload their JSON files (which contain the private keys for coins in possession), then claim ETC coins and send them to another address. As can be seen from this example, users can receive chain-split coins as long as they provide the private keys as the proof of their claim.

How do exchanges handle hard forks?

Thus, providing private keys shouldn’t be difficult as long as the coins are stored in a software or hardware wallet that can connect to the coin’s mainnet. However, the situation is different when the forked cryptocurrency is held on a crypto exchange’s hot wallet — in that scenario, the keys are technically held by the platform along with the coins. Consequently, the exchange gets to decide if new coins are going to be distributed among clients or not, and the overall process of claiming those coins gets more complicated.

For instance, when the aforementioned ETC fork occurred, Kraken exchange announced its support and declared that it was crediting client accounts with their ETC balance as long as they had an ETH balance on Kraken at the time of the fork. Similarly, when Bitcoin Diamond (BCD) forked off of the original Bitcoin blockchain in November 2017, Binance was one of the few major exchanges to issue the new coins to BTC holders, while many other exchanges ignored the hard fork entirely.

Therefore, it comes down to the exchanges’ politics when a hard fork nears — although, usually platforms let their clients know beforehand if they are going to support a coin split and reimburse them with new coins. However, some exchanges opt to accommodate most forks by default — for instance, in July, Binance announced that it will endeavor to support airdrops and forked coins conducted by any project, as long as the project team reaches out and contacts the platform directly. Somewhat similarly, in April, Coinbase declared that it will support the withdrawal of Bitcoin forks across Coinbase products (albeit not trading).

In the opposite way, some exchanges choose not to support forks deliberately. Thus, in May, Dutch exchange Bl3p chose to delist BCH prior to its hard fork, citing requirements for altcoins that the coin allegedly failed to meet. The platform warned the clients to withdraw their remaining BCH.

However, even if the exchange supports a certain hard fork, complications might arise. That was the case with the Chinese investor known under the pseudonym Feng Bin, who recently filed a lawsuit against local crypto exchange OKCoin. Bin claimed that the platform prevented him from getting Bitcoin Cash (BCH) after the BTC fork took place in August 2017.

According to local news agency Legal Weekly, Feng Bin claimed that he couldn’t receive the 38.748 BCH that he was due after the split. In the lawsuit, he explained that he attempted to sell his share of BCH when it reached its all-time high of around $4,000 in December, 2017, only to find “that there was no ‘button’ to extract the [BCH] that the platform promised.”

Following a complaint about the platform’s customer support, OKCoin stated that Feng Bin could not extract any BCH simply because the platform’s program for claiming the forked crypto had expired at that point. The investor, in turn, accused the crypto exchange of failing to provide an official announcement about the deadline for such applications.

While Feng Bin’s case is reportedly a first-of-its-kind in China, a group of five Japanese lawyers have already challenged an unspecified ‘majority’ of local exchanges that have been reportedly failing to deliver on split coins.

“The virtual currency you deposit at an exchange should not belong to the exchange, but to the user,” the lawyers argued, stressing that when exchanges decide not to grant split coins to clients or release them after a delay, they essentially rob them of their profits.

In their announcement, the lawyers recognized that there is no legal framework for handling hard forks, and that seems to be the essential problem in regards to the complex relationship between crypto exchanges and hard forks.