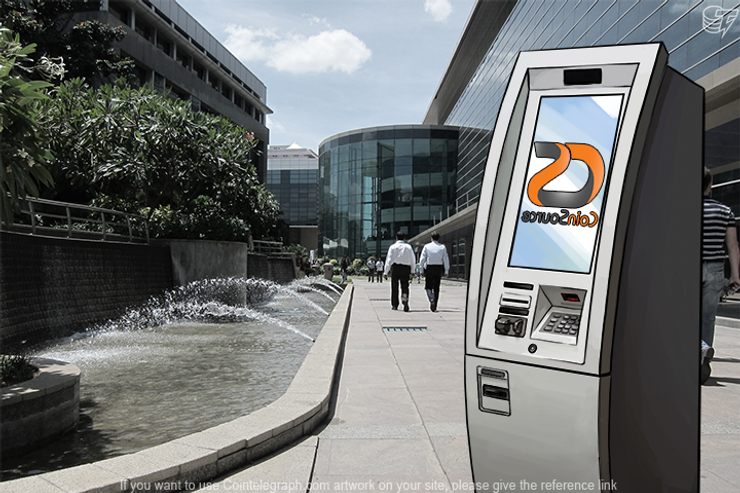 CoinSource, a Bitcoin ATM network in US, has just announced the instalment of two Bitcoin ATMs in two of America’s most highly populated states: California and Texas. The Bitcoin ATMs installed today are one-way GenesisCoin BTMs where customers can instantly purchase bitcoin in a convenient way. Both BTMs found their new homes today, December 16, 2015.

The new Bitcoin ATM installed in Palo Alto, California is strategically located in the city’s technology district just two miles from Stanford University and four miles from Google’s headquarters, at the Barron Park Market at 3878 El Camino Real, otherwise known at State Route 82. According to CoinSource this Bitcoin ATM machine “replaced an existing machine that often did not work, that was owned and operated by a different provider.”

While another BTM just installed in Dallas, Texas is the first Bitcoin ATM in the North Dallas market. It is installed near the intersection of Interstate 635 and the Dallas North Tollway.

“Relative to the other machines in Dallas, GenesisCoin machines are more battle tested. They are also more reliable than existing Bitcoin ATMs in this area and have been proven to be easy to use for both new and veteran customers.”

More US customers able to purchase Bitcoin in person

Apart from these two new BTMs, there is currently only one other BTM in Palo Alto, and only two others in Dallas, while according to Coin ATM Radar, there are a total of 190 BTMs across the entire US, said Sheffield Clark. He also mentioned that nationwide, roughly 25% of BTMs operate with two-way functionality.

Sheffield Clark also noted that this was a particularly important development for him personally: “My family and I live in the Dallas area and, as a result, today's announcement is of particular importance for me. We look forward to helping serve the Dallas community and to helping bitcoin grow."

Eric Grill, CEO and Co-Founder of CoinOutlet, a Bitcoin ATM operating company in the US, who previously had a Bitcoin ATM in Palo Alto but moved it a few weeks ago to Los Angeles and haven't turned it on yet, commented to Cointelegraph about the technical difference between CoinSource and CoinOutlet’s maschines:

“[CoinSource] are using BitAccess machines and their system. Functionally [Bitcoin ATM’s] do the same. Although ours is built on top of NXT network, they are all run on the same "Network", those BTM's are standalone and operate independently. We are using NXT blockchain to fascilitate the transactions.”

We hope that you like the companies that were mentioned in this article. Find them in our rating of top bitcoin ATM companies and vote for your favorite.