Cointelegraph has learned that crypto hedge fund Adaptive Capital, will shutter all operations after taking heavy losses during the March 13 crypto market meltdown which saw Bitcoin (BTC) price drop to a 2020 low at $3,775. As first reported by The Block, the fund has issued a letter to its investors announcing the closure of the fund and the return of all remaining assets to investors.

The hedge fund had previously reported gains over 552.77% from October 3, 2018, through May 3, 2019. The letter to investors is said to cite a series of infrastructural problems with a trading venue as the primary cause of the losses.

Although the venue hasn’t been named in Adaptive Capitals’ letter to investors, BitMex was inoperational for almost an hour during the massive sell-off, leaving the hedge fund operators unable to respond to the market.

BitMex has since reported on this and has blamed a DDoS attack for the down period.

Did Adaptive Capital miss the signal?

Since dropping from $10,500, Bitcoin’s price action had already taken a bearish slant and the digital asset’s positive trend seems to have been broken on Feb. 26, when the daily candle failed to gain above $9,200. This completed a head and shoulders pattern and was followed by a strong downside move for Bitcoin. 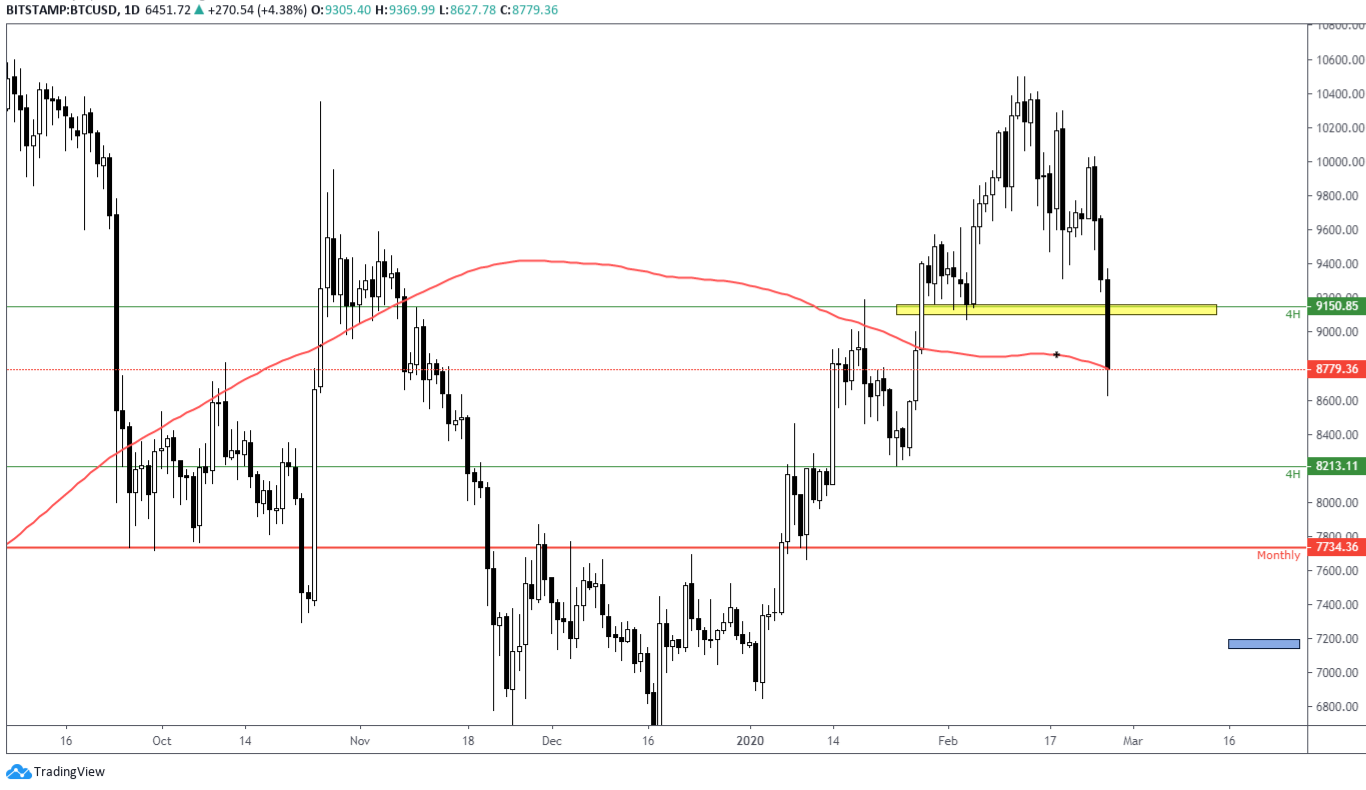 The bloodbath that ensued was unpredictable as no one, including Adaptive Capital, seemed to expect a devaluation of around 50%, leaving Bitcoin near $3,775, a price point that hasn’t been seen since April last year.

Like many institutional investors, Adaptive Capital likely had the longer Bitcoin’s price action on  longer timeframes in mind. Proof of this comes from an August 2019 tweet from Murad Mahmudov, former Goldman Sachs analyst and the Chief Investment Officer at Adaptive Capital.

In the tweet Mahmudov showed just how bullish he was by predicting a $100,000 price target for Bitcoin in the long-run:

“At first glance this looks like a weak chop for the next week or so, but my intuition tells me there is steady accumulation happening at these levels. Don't try to outsmart yourself on short timeframes, zoom out & think big. In my view, BTC is going to $100K per orangecoin.”

Crypto hedge funds: Another one bites the dust

Crypto Funds gained popularity with crypto and traditional finance investors, especially in 2018, fueling many of the companies and projects available today. These typically range from hedge funds like Alliance Capital to venture capital funds like the Digital Currency Group.

It is not uncommon to see traditional venture capital firms delve into crypto which shows some level of institutional demand for cryptocurrencies.

In a report published in May 2019, PwC estimated that in 2018 150 active crypto hedge funds collectively managed $1 billion in assets, and despite the negative performance of many new and ambitious crypto hedge funds are still being created, although the number of new funds has now decreased by more than half in 2019 compared to the year before.

Despite signals of institutional demand for cryptocurrencies and blockchain technology, this has failed to materialize in 2019 and hedge funds can only take so many losses before they throw in the towel. According to a December 2018 report from Crypto Fund Research nearly 70 crypto hedge funds have shut down.

In the meantime, exchange traded funds continue to see rejections from the U.S. Securities and Exchange Commission (SEC) amid concerns that the Bitcoin market is simply too prone to manipulation. Most recently, the SEC rejected another ETF submission by Wilshire Phoenix. The NY-based firm was hoping to hedge against Bitcoin’s volatility by including US Treasury bonds in the basket.

As the current Coronavirus situation unfolds, it is hard to say how hedge funds and other market players will cope but as even traditional safe-haven assets like gold continue to fail, Bitcoin may find itself in completely new territory as an emerging asset class.

Whether that is good or bad, it’s left to be seen but members of Adaptive Capital remain bullish nonetheless. Earlier this week, Willy Woo, partner at Adaptive Capital and self-described “pioneer in on-chain analytics” tweeted:

“Dump then moon. We are undergoing flight to safety right now, BTC is looking for its bottom. But know that once the bottom is in there are strong bullish pressures ahead. It's this economic environment in the years ahead that Bitcoin was built for.”