Crypto markets remain in the green, as Bitcoin and Ethereum see small gains in their price with total market cap also increasing.

The top ten coins listed on CoinMarketCap are all in the green today, April 8, with Bitcoin (BTC) above $7,000 and Ethereum (ETH) finally back above the $400 barrier.

BTC is currently trading at an average of $7,070 on Cointelegraph’s price index, up a little more than 2 percent over a 24 hour period to press time. ETH has seen even more growth, up over 4 percent over a 24 hour period, and trading at around $403 by press time, according to Cointelegraph’s price index. 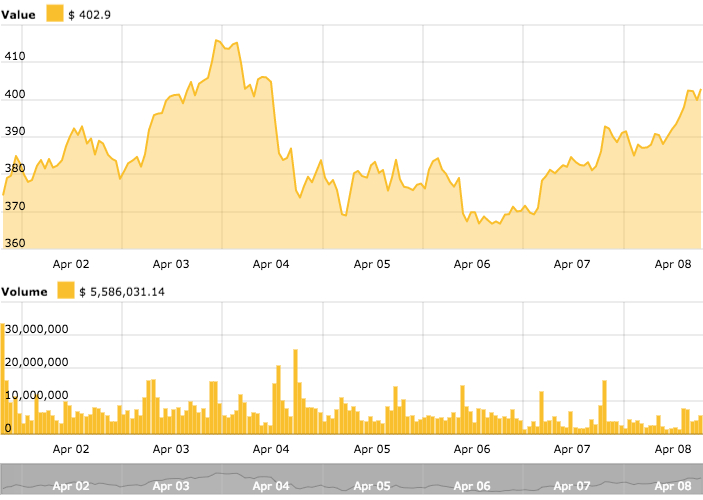 Bitcoin Cash (BCH) is up almost three percent over a 24 hour period, trading at around $656 by press time, despite the fact that the BCH-promoting Twitter account @bitcoin has been suspended, most likely due to an influx of Bitcoin enthusiasts reporting the account as a scam.

Total market cap of all cryptocurrencies on CoinMarketCap is currently around $267 bln, up 9.4 percent on the week. Bitcoin dominance is at around 45 percent, a level its been holding since late March.

The positive uptick in the market today could be attributed to major tech venture capital investor and crypto enthusiast Tim Draper’s reaction to the news that India’s central bank would end relationships with crypto-related accounts, a move that Draper called a “huge mistake.” In another win for crypto this week, it was reported that the Soros Management Fund, headed by investor George Soros who had harshly criticized as a “bubble,” would be investing in cryptocurrencies, along with the Rockefeller family’s venture capital firm.