Did 2019 Deliver on All That Was Promised for the Crypto Industry?

Has 2019 lived up to the expectations of the crypto community and those working in the industry, and what are the biggest disappointments?

Disappointment isn’t always a bad thing. It can be a spur, motivating one to work harder to meet expectations and goals. It is in this spirit that Cointelegraph informally surveyed members of the crypto community about this past year’s unfulfilled industry promises. Here are some of 2019’s biggest disappointments:

Where are the giant blockchain or crypto projects — enterprises that seize the imagination, rivet the public’s attention, and quiet the crypto skeptics? As Nouriel Roubini noted last year, “[Blockchain] still has only one application: cryptocurrencies.” Many in the industry are still waiting. As Lanre Sarumi, CEO of crypto derivative exchange Level Trading Field, told Cointelegraph:

“The lack of a groundbreaking project that would have opened the eyes of skeptics is most disappointing. Libra came the closest with a lot of promise, but nothing else [in 2019] really popped.”

Not much comfort can be drawn, either, from Forbes’ list of the top 50 financial technology firms. Only five crypto and blockchain firms made the 2019 “Fintech 50” list: Coinbase, Ripple, Bitfury, Gemini and Circle — compared to 11 in 2018.

The industry is still looking for a flagship application. “People need a simple use case that makes the benefits of blockchain technology clear and straightforward, like email,” said Chris Hart of Civic Technologies in a recent report published by the Zage marketing platform.

Killer DApps, scalability and institutional adoption are often cited as three missing ingredients required for blockchain to reach the tipping point in public acceptance. With regard to institutions, some progress was made in 2019 with the entry of Fidelity and ICE’s Bakkt, among others. But is it enough?

“Failure to attract institutional investors was certainly a disappointment,” Sarumi told Cointelegraph. “The Bakkt futures contract was specifically designed to attract both institutional and retail and it got a lukewarm response. Ditto for the recently launched Eris [credit and interest rate] futures.”

Many experts agree that usability must improve before the wider public adopts crypto and blockchain networks. In Zage’s survey of 102 blockchain technology project leaders, 41% of respondents agreed that a seamless user experience was key to mass adoption. The blockchain DApp experience needs to be more like the web and mobile phone user experience. “Right now to use most blockchain and cryptocurrency products, you have to essentially be an expert,” said Kory Hoang, co-founder and CEO of the stablecoin platform, Stably.

Stephen Pair, CEO of Bitpay, would have liked to see more rapid progress in the consumer adoption of cryptocurrencies in 2019, “and more adoption because it got easier to use,” he told Cointelegraph, continuing:

“Like not having to deal with Bitcoin addresses directly. If we could just solve some simple problems like that, ideally in an industry standard way, that could make a difference.”

Pair was also disappointed in the mix of products being purchased with crypto at present: “I would like to see a healthier mix of everyday consumer items and services being sold, such as consumers paying their cell phone bill, or DirecTV bills [with cryptocurrency].”

Pair also believes that people tend to spend BTC when prices are high, he added, often purchasing expensive items, like Lamborghinis. Nothing wrong with that — but he’d like to see more everyday items too.

Regulatory compliance remains an afterthought in parts of the crypto/blockchain world.

Moreover, compliance at 24% of the exchanges was “weak,” meaning those exchanges allowed CipherTrace researchers to withdraw at least 0.25 BTC daily with virtually no questions asked — the researchers didn’t even have to show ID verification. 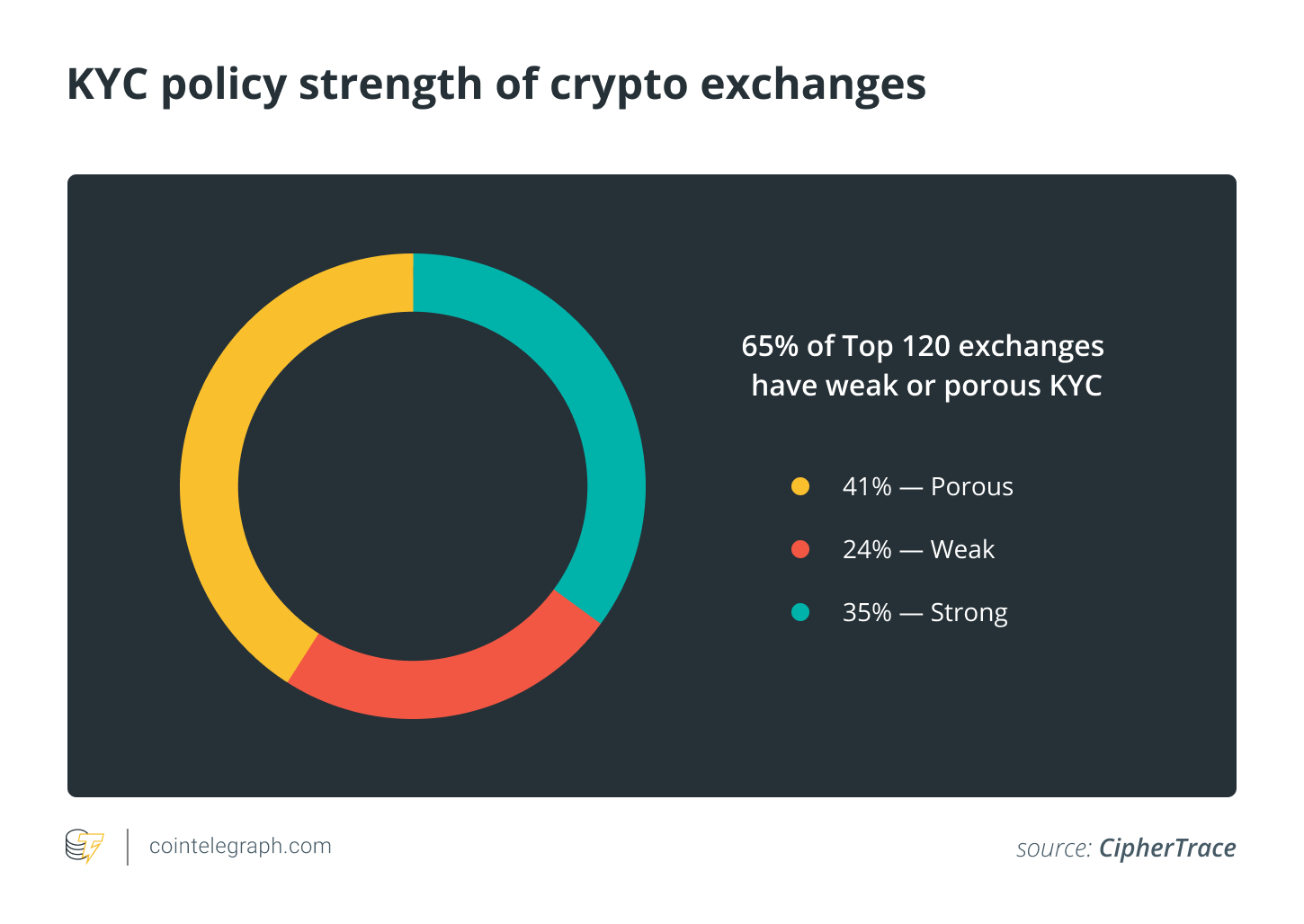 PwC Global Crypto Leader Hong Kong Henri Arslanian told Cointelegraph that, “Anyone who is launching a crypto exchange in 2019 with no regards to KYC or AML probably does not have the future of the crypto ecosystem at heart.” Regulatory noncompliance, especially around Anti-Money Laundering, remains a barrier on the road to mass acceptance of cryptocurrencies, continued Arslanian:

“A large AML or sanctions violation scandal today could erase years of hard work from the community which tried to show that crypto is much more than just the Silk Road or the dark web.”

The industry should not only comply with regulations, it should welcome them — at least if it wants to grow, as Lone Fønss Schrøder, CEO of the Concordium blockchain solution, told Cointelegraph: “I am certain that big companies will not go beyond the proof of concept stage on a chain that doesn’t enable the authorities to regulate.” Firms are going to need the validation that regulation grants.

Misperceptions about cryptocurrencies and blockchain technology persist. When Nordea Bank banned its 31,500 employees from trading in Bitcoin or other cryptocurrencies — even in their own time — it said it was worried that its employees might “unwillingly get involved in activities that are unethical or outright illegal,” as the bank told Cointelegraph in December.

“Most people still associate blockchain with volatile cryptocurrencies and IPO scams,” Schrøder noted, adding that, “In the blockchain space we have a shared responsibility to educate business leaders, not only about what blockchain is, but more importantly what it can do for businesses and institutions.”

Along these lines, in late December 2019, Concordium announced the formation of the Blockchain Academy Network, a collaboration between Concordium and academia to foster the use of blockchain within businesses.

The industry needs to do a better job reaching out to the non-crypto public, including through the conferences, added Nick Saponaro, co-founder and chief information officer of The Divi Project, in an email to Cointelegraph:

“I’m disappointed educators and conferences are failing to attract newcomers, instead opting for the creation of an echo chamber. High prices and luxurious venues are keeping out the people who will benefit most from this technology.”

CipherTrace reported a significant reduction in cryptocurrency crime in the third quarter of 2019, good news “after two years of large, high-profile exchange hacks and exit scams.” That said, “2019 still experienced a massive spate of crypto crimes — more than $4.4 billion to date,” and a big jump from 2018. 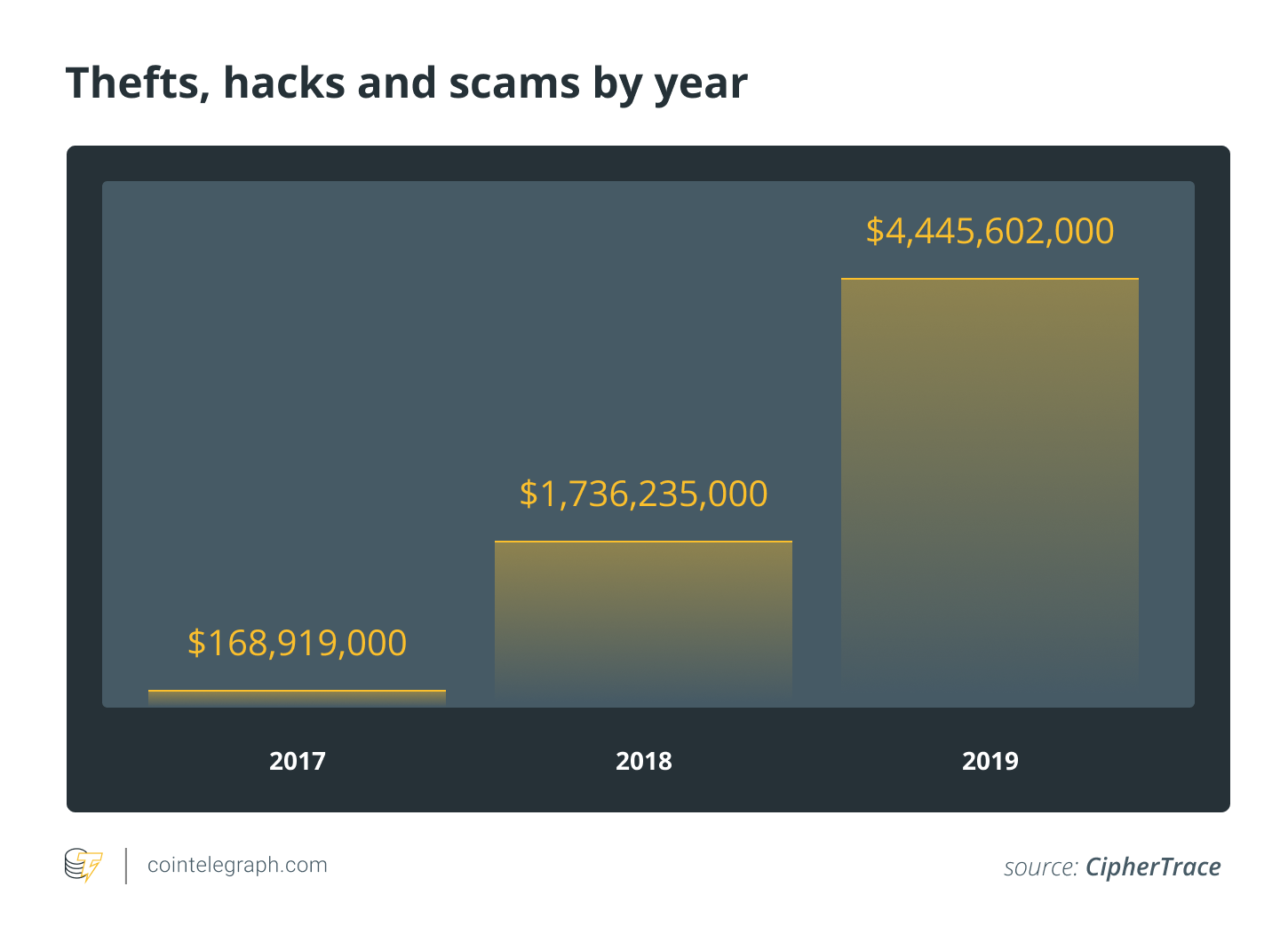 The security firm detailed several large exit scams and misappropriation of funds in 2019: Plus Token at $2.9 billion, QuadrigaCX at $192 million, and the Bitfinex misappropriation of $851 million. PlusToken, a Chinese Ponzi scheme, particularly had the potential to rile crypto markets, Chainalysis reported on Dec. 16, which stated:

“We believe that the criminals behind the PlusToken Ponzi scheme could be driving down the price of Bitcoin when they liquidate their stolen funds via OTC brokers.”

In fact, soon after the Chainalysis report, Ether dropped 10% within minutes — which some attributed to a PlusToken dump. The ETH price then went on to face even more selling pressure on Dec. 19 as several large transactions that were associated with PlusToken disturbed traders, as reported by Cointelegraph. The industry evidently needs more self-policing. “As a community, we need to do a better job in calling out the bad apples,” commented Arslanian.

According to Saponaro, the most disappointing thing for him in 2019 was the lack of integrity, “Exit scams, Ponzi schemes, pump and dumps, and extortionist tactics are still abundant throughout the space.”

The continued lack of integrity — or the perception of such — sullies the reputation of the crypto/blockchain community, said PwC’s Arslanian. “We are always as strong as the weakest member of our community.”

Cutting corners is a bad business strategy, too, according to Felix Hartmann, managing partner at Hartmann Capital, who said: “Whoever is willing to play the long game, both in terms of creating a community-first, integrity-driven business/network model, as well as putting technology and usability first, will see success.”

Instead of citing a single disappointment in 2019, or even a series of unfulfilled promises, Vinny Lingham, co-founder and CEO of Civic Inc., has opted to look at the year as a whole. As he told Cointelegraph:

“When the crypto community looks back at 2019, it will be remembered as the lost year. This is not unexpected because 2017 was such a milestone year. I like to say that the bigger the party, the bigger the hangover. We’re still dealing with the hangover.”

“After the crypto winter, the general thinking was that the departure of the rent seekers and easy money worshippers would allow the true believers to roll up their sleeves and fulfill the true potential of blockchain/crypto. Well, the true believers probably have long arms and/or long sleeves because they are still rolling up.”

It’s possible, however, that one could be underestimating the amount of progress made this year. It’s like an iceberg, as one industry executive told Cointelegraph; the greatest volume is below the waterline, unseen. But once these blockchain network projects achieve a certain scale, those watching will begin to see the power that has been created — “in the next three to five years it will be huge.”

“Maybe it needs more time, but the sound of crickets in the realm of groundbreaking projects to me was the most disappointing,” concluded Sarumi. “Hopefully a few emerge in 2020.”