Egypt Lays Out Path for a Crypto Future With Draft Law

The Egyptian government is ready to overcome years of uncertainty on crypto, with new laws reportedly coming by the end of 2019.

6478 Total views
206 Total shares
Listen to article
0:00
Analysis
Own this piece of history

In the end of May 2019, the Central Bank of Egypt (CBE) announced that it is working on a draft law for crypto-related activities. When introduced, it will oblige financial institutions in the country to obtain licenses in advance for creating, advertising or operating platforms that issue or facilitate trading of cryptocurrencies. Licenses will be issued by the CBE’s board of directors. This marked the first step the Egyptian government made toward the legalization of activities related to cryptocurrencies.

Is Egypt defining its stance on crypto? 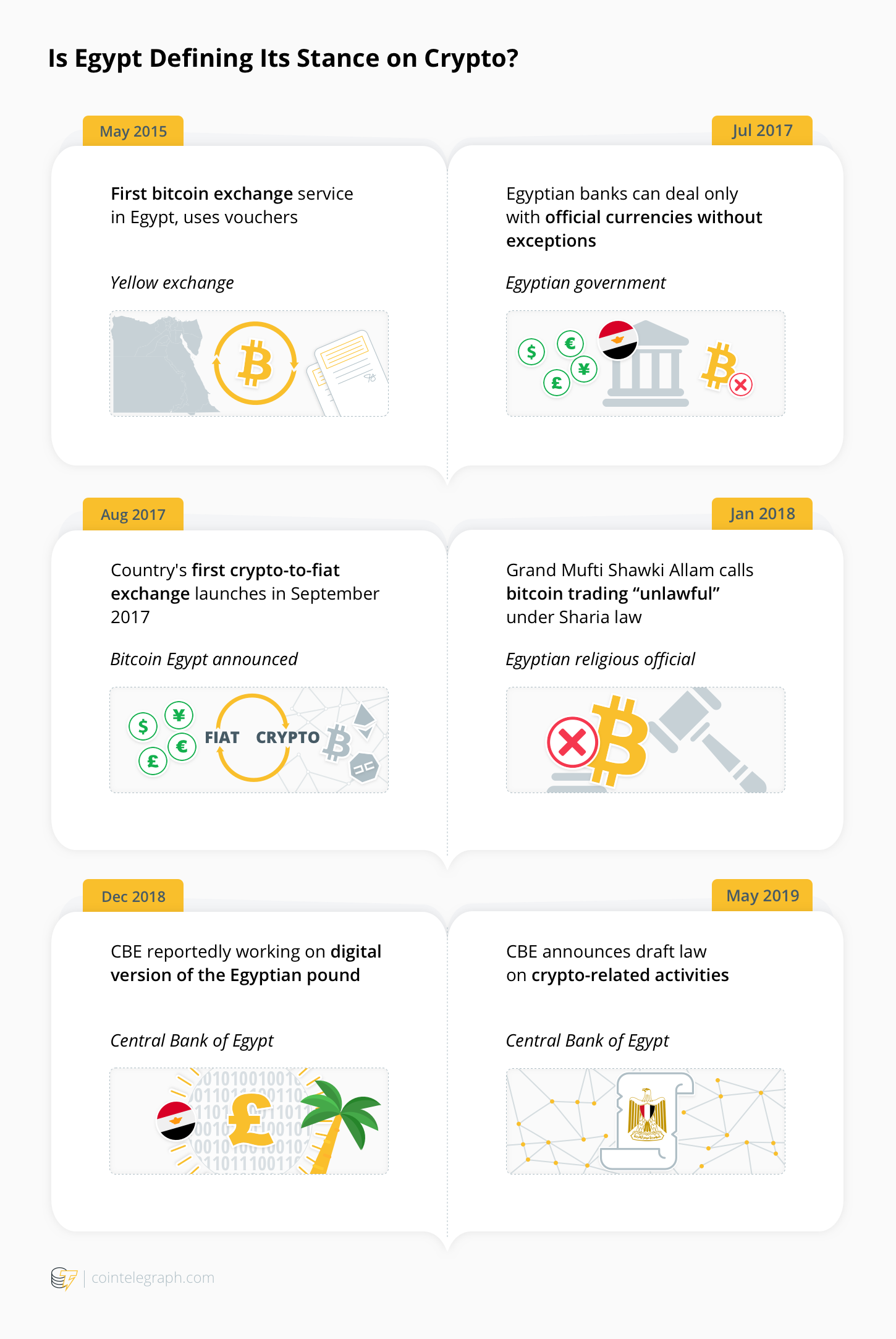 The state’s attitude toward the new sector of the economy, especially the financial structures in Egypt has always been unstable. Bitcoin (BTC) and cryptocurrencies only began to be widely discussed in 2015, when the startup Yellow launched a bitcoin voucher service. In fact, it was the first service in the region of the Middle East and North Africa that allowed Egyptian citizens to buy bitcoin for the national currency through the use of vouchers.

According to the creator of the service, David El Achkar, only 10% of Egyptian citizens had bank cards and accounts. So, he saw the prospect for widespread use of bitcoin and other cryptocurrencies in the country.

And he was proven right. Cryptocurrencies quickly became popular among the citizens, partially due to the unstable financial situation in the country. Crypto-enthusiast Ahmed Elmogy claimed that many Egyptians preferred money transfers in bitcoin as a convenient and cost-effective instrument. But even then, he noted that the government of the country was rather sceptical about new technology and digital currencies due to a poor understanding of the essence of this technology.

His words were confirmed in July 2017, when the Egyptian government made a tough statement that indicated that cryptocurrencies carried a certain risk, as they could be used by terrorist groups to finance their activities anonymously.

Since then, the financial situation in the country continued to deteriorate, and just a month after the announcement, in August 2017, news surfaced that Egypt would be getting its first crypto exchange — i.e., Yellow — which was supposed to start trading in September 2017. The exchange was supposed to be the first service where the Egyptian pound could be exchanged for digital currencies in a bitcoin\pound trading pair, without the use of other currencies like the United States dollar.

But in January 2018, a high-ranking official on religious law, Grand Mufti Shawki Allam, called bitcoin trading illegal under Islam’s Sharia law, as bitcoin was not an “acceptable interface of exchange” and therefore unlawful to trade it. The cleric also said that bitcoin was a tool for money laundering and indicated that it was not under the control of any government, and so it could potentially undermine the economy of Egypt.

On the road to a national cryptocurrency

The government employed a strict attitude toward cryptocurrencies until the end of 2018, when, in late winter, the government had to look for ways to cut costs. Then, the representative of the CBE said that the government wanted to introduce a digital version of the Egyptian pound. The bank worked on a feasibility study of such a maneuver.

There were claims that Egypt believed that the digital version of its blockchain-based paper currency could help to minimize the government’s expenses on issuing paper money and transactions compared to coins and bank notes, which was the first step toward a cashless society.

But further development and research stumbled. The CBE did not introduce and did not issue its cryptocurrency, perhaps because of the low awareness and understanding of blockchain technology or possibly due to real economic problems, because of which a digital national cryptocurrency was not the primary goal.

As it turned out, the government did not abandon the idea of a national cryptocurrency and in May 2019, it announced the intention to issue licenses for fintech firms and banks, which in turn would allow them to issue and trade cryptocurrencies, as well as process transactions. The purpose of the future law is to establish state control over the development of new technologies in the financial and banking sectors. The law is expected to become the basis for digital payments in the country.

A possible reason for this step by Egyptian authorities is the interest of neighboring countries in the development of blockchain industry. For example, representatives of the United Arab Emirates and Saudi Arabia announced at the beginning of the year a cooperation in order to create a joint cryptocurrency, which will be used as cross-border digital asset between the banks of both countries.

Experts from both countries discussed the jointly integrated strategy, including initiatives in such areas as civil aviation, financial literacy for young people and the creation of a digital currency intended for cross-border payments. Earlier, UAE-based payment company UAE Exchange created a blockchain payment system together with Ripple.

But the legal status of cryptocurrencies in Egypt is still uncertain — i.e., it is not defined. The CBE has yet to determine its position on digital currencies and their place in the country's economy. But, what is pleasing, however, is that the authorities have moved away from the path of prohibitions that will enable exchanges to conduct their business in the country.

At the same time, some on Twitter have questioned whether the prohibition of cryptocurrency trading in Egypt was ever present:

Actually - I can't find any evidence of an Egypt Crypto ban. The #libraryofcongress says
1. CBE has issued a warning about the danger of crypto
2. Various Egyptian religious authorities have 'banned' crypto - but a fatawa isn't a legal document

So, the licensing of cryptocurrency exchanges is an ambiguous thing. For ordinary users the most important issue is the safety of their funds. Licenses do not contribute to this: Hackers might break into any exchange and do not pay attention to their legal status, just as in the recent attack on a highly compliant exchange, Binance. Having crypto exchanges without any sort of regulation in this day and age would be unthinkable, since such a young industry is full of fraud.

Therefore, it seems like the Egyptian authorities have managed to overcome the sharp denial of cryptocurrencies and have recognized the importance of fintech companies in the country.

The development of licenses in Egypt also marks a step toward the development of a digital economy, which is widely discussed in most western countries. Surely the confirmation of digital payments, exchanges and transfers requires deep learning and testing. But the Egyptian mood regarding cryptocurrencies has been changing for a while, ever since the CBE reported on developing a digital version of the national currency.

The main problem the government wanted to solve was the increasing complication of printing bank notes. The cheaper it is to create money, the less destructive will the inflation be for the country's economy. Besides that, the transfer to a cashless society provides many more tools to maintain the general welfare of the country. The regulation of cryptocurrencies in Egypt isn’t expected until the end of 2019, but the licenses must become sufficient until that time comes.

It is clear that there are still a lot of questions and uncertainties about both the new law and the Egyptian government’s approach to cryptocurrencies. But some experts are optimistic about any attempt of the state to welcome the new technology.

According to analytical ratings website ICObench, there are currently only three initial coin offerings (ICOs) that are related to Egypt. In comparison, there are nearly 750 ICOs being held in the U.S. The current disparity is vast, but maybe a more favorable stance from the government might encourage new ICOs to emerge.

The fact that Egypt has begun to switch its approach may signal that it is ready to accept the progress of crypto, gain new streams of income and even open up a new sector of the economy. Perhaps such a long wait to remove the ban was not accidental. The government was possibly studying how other progressive countries, such as the UAE, successfully issued licenses for cryptocurrencies exchanges, which ensured the security of digital assets. And now, Egypt is also potentially ready to repeat that successful experience while taking minimal risks.