EOS has long been the most legitimate competitor to Ethereum, so what does the upcoming ETH 2.0 implementation hold?

12650 Total views
34 Total shares
Listen to article
0:00
Analysis
Own this piece of history

When the EOS network launched in 2018, it looked to be one of the biggest contenders to Ethereum (ETH) — not just in terms of providing a scalable development platform for decentralized apps, or DApps, but also in terms of a well-funded project with great support, and one that could rival Ethereum as the second-ranked cryptocurrency.

So far, while EDApps OS is definitely a worthy competitor, it’s hard to argue that it has toppled Ethereum, which houses almost nine times more DApps on its platform than EOS, according to State of the DApps. Nevertheless, EOS remains a top competitor, mainly due to its superior throughput. Facilitating over 700,000 transactions in 24 hours, EOS can currently handle around 20 times the volume of Ethereum. This also translates into user numbers, with EOS now catching up. 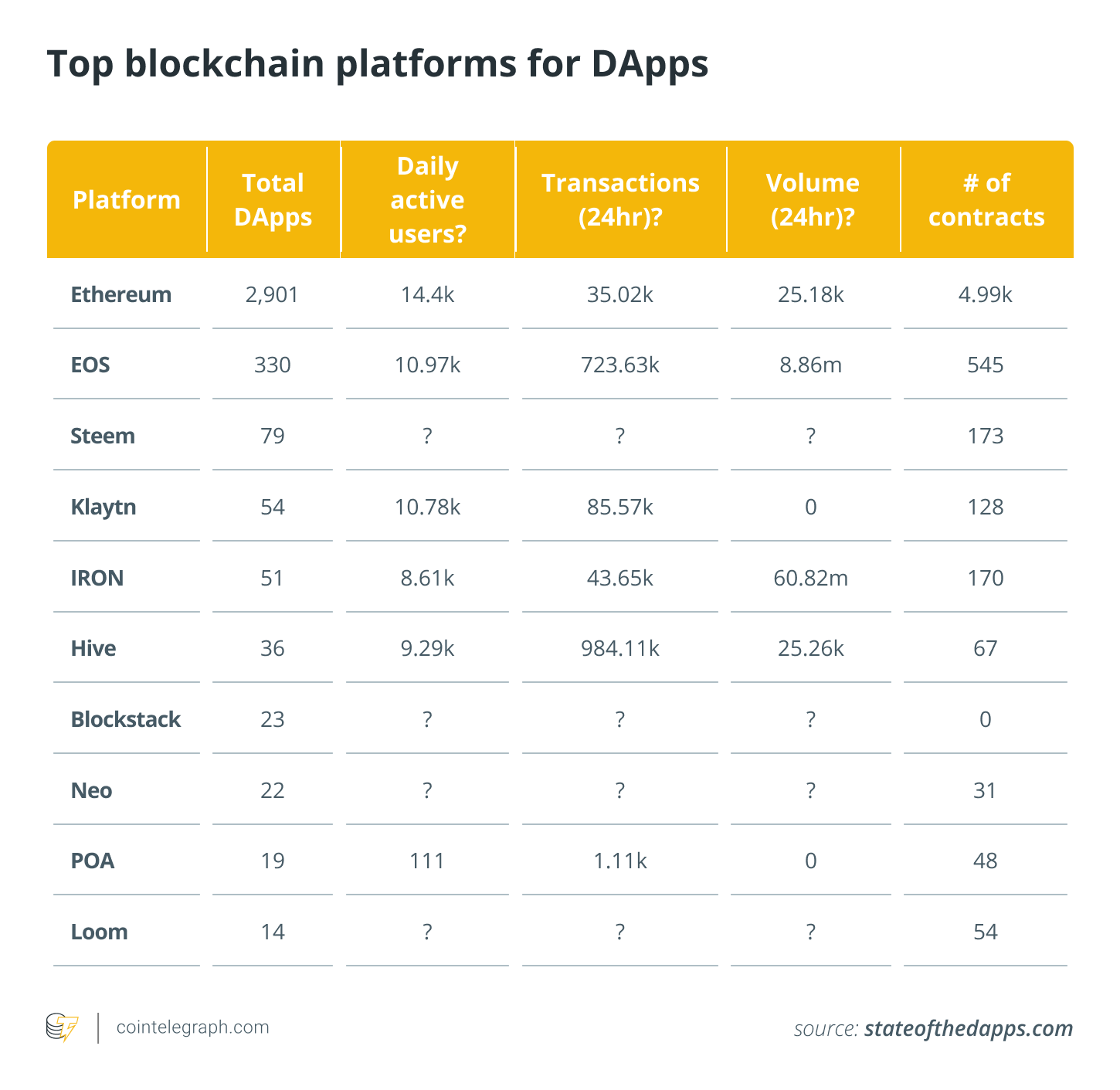 Ethereum’s 2.0 upgrade is looming ever closer on the horizon, promising to level up scalability through sharding. So, how will the new and improved version of Ethereum measure up to EOS?

Scalability: The name of the game

Ethereum’s ongoing challenges with scalability have been one of the most pressing drivers for the 2.0 implementation. Currently, the platform can support around 30 transactions per second, which causes frequent network congestion and spiraling gas fees.

Ethereum co-founder Vitalik Buterin has indicated that ETH 2.0 implementation will bring a vast improvement, ultimately achieving 100,000 transactions per second, or TPS, with the help of the sharding mechanism, which enables parallel execution by splitting the blockchain into pieces. However, although the first phase of the Ethereum upgrade will happen by the end of summer 2020, only the final phase — which is around two years away — will implement sharding, bringing about the assured 100,000 TPS speed.

In contrast to Ethereum, EOS was designed from the start with scalability in mind, and is achieved by enabling parallel transaction processing while keeping the number of block producers small, speeding up throughput. EOS’s scalability, in comparison to Ethereum, contributed to much of the buzz generated around the project from the time it started selling tokens in 2017 to its first launch in 2018. Currently, the maximum throughput achieved on EOS stands just shy of 4,000 transactions per second.

Therefore, there’s every chance that Ethereum 2.0 could contend with EOS by the time its implementation is finalized. However, this assumes that EOS will maintain the same transaction speeds it can currently handle. EOSIO’s strategic vision lists scalability as one of the platform’s priorities, detailing various methods that can enhance vertical and horizontal scaling and parallel smart contract execution. Dan Larimer, chief technology officer of the company behind EOS, Block.one, told Cointelegraph that EOS will continue to hold the edge over Ethereum in that metric:

“EOSIO will continue to be the faster option in ‘single shard’ applications, given that it’s entrenched in the architecture level, and Ethereum’s 2.0 release will account for more applications on its platform, but not bigger ones.”

Interestingly, inter-blockchain communication also features among the EOSIO priorities. Larimer clarified that interoperability between blockchains could be another area for EOS to excel, adding, “We’re strongly encouraging interoperability solutions, like our recent EOSIO Challenge winner eosio.evm, that empower developers to keep using and scale their legacy ethereum smart contracts.”

Beni Hakak, CEO of LiquidApps — which runs the DAPP Network — told Cointelegraph that he believes the interoperability will bring about a future where both platforms will operate in harmony for the benefit of developers:

“The future is multi-chain, giving developers the opportunity to blend together the advantages of various chains, allowing them to optimize their dApps for performance and cost-efficiency in a way that best fits their end-users. Developers can choose the base layer based on their specific use case, and interoperability will give them the freedom to migrate to a different chain.”

Ethereum is arguably more decentralized than EOS. Currently, anyone with the right mining equipment can join the Ethereum network and become a miner. The first stage of the ETH 2.0 implementation will involve a move to proof-of-stake, with the minimum stake set at 32 ETH. Anyone who can reach this barrier can still join the network as a validator to compete for block rewards.

A vast interest in staking led some analysts to suggest that there may be a price rally resulting from large quantities of ETH being put out of circulation. Whether mining or staking, Ethereum’s decentralized network makes it secure against attack, because the cost to attack the network is almost prohibitively high.

So far, one of the biggest criticisms of EOS is its centralization — an integral part of the platform’s design. The delegated proof-of-stake consensus only ever allows a fixed number of 21 block producers, with token holders entitled to cast their votes for who gets to participate as one of the group.

However, the number of block-producing nodes isn’t the most pressing concern. Claims around lack of voter engagement, vote-buying and concentration of tokens into the hands of a powerful few have prompted concerns about the balance of power within EOS. Last year, news emerged that multiple block producers were possibly being operated by a single entity. In this respect, if a powerful party turned malicious, they could attack the EOS network.

Nevertheless, Vitalik Buterin himself has previously shown support for the EOS governance model, recognizing that although it’s centralized, it does avoid the problems that emerge from decentralized blockchains.

The respective teams behind EOS and Ethereum development are a fairly good reflection of how each platform operates. The ETH 2.0 team isn’t a single coherent entity. Rather, there are several teams working on different iterations of the platform. Among them are well-known names in the blockchain community, including Vitalik Buterin, Justin Drake and Vlad Zamfir.

On the other hand, while EOS is open-source, the company that originally built the platform, Block.one, continues to develop it today. Block.one is headed by CEO Brendan Blumer and Daniel Larimer, Block.one’s chief technical officer and the architect of both the delegated proof-of-stake consensus and the Steem blockchain.

The biggest announcement to emerge from the EOS camp in recent months is around the launch of its social network, Voice. The company behind EOS, Block.one, has previously provided $150 million in funding to ensure that the project can operate independently. Meanwhile, most of the news around Ethereum continues to focus on the ETH 2.0 upgrade. Although no timeline is currently set, it’s widely expected that the first phase will be this year with the final public testnet already confirmed for launch on Aug. 4.

So, despite EOS being touted as the other half of a “clash of titans” with Ethereum, the two platforms continue to co-exist without a clear winner emerging. However, the promise of vastly improved throughput from Ethereum 2.0 does make it a more serious contender for EOS in the scalability stakes.

Nevertheless, a more centralized design of EOS arguably gives the platform an agility edge over Ethereum. Therefore, there’s every possibility that EOS could pull off a scalability or interoperability upgrade before Ethereum 2.0 is fully implemented.

Either way, there isn’t any reason why the two platforms can’t continue to operate side-by-side in the future, as developments in interoperability could even see them start to play together in a way that has not been possible to date. As Hakak of LiquidApps put it: “Each chain serves a purpose, and brings its own functionalities and its own advantages to the table. We aren’t far from a point where dApps would combine Ethereum and EOS technology without the end-user being exposed to the backend.”