The first federally regulated platform for trading Bitcoin futures is off to a slow start, but predicted to pick up steam over time.

Assuming that it is digital assets’ volatility and lack of regulatory safeguards that deters otherwise highly interested institutional investors from going big on BTC, Bakkt’s debut is a major milestone on the timeline of crypto adoption – and many in the space anticipated its debut with great excitement. However, as the first week of operation is coming to a close, the trading volumes on the platform remain meager.

Worse luck, Bakkt’s launch coincided with an immense slump in Bitcoin’s market price, leading some analysts to suspect a causal connection between the two. Does the underwhelming kickoff signify an early end to Bakkt’s aspirations of becoming a gateway for widespread, institutional adoption of crypto?

The Intercontinental Exchange is a U.S. enterprise headquartered in Atlanta that operates a dozen major regulated exchanges and marketplaces around the world, including the New York Stock Exchange (NYSE) and ICE Futures Europe. In August 2018, ICE announced its plans to create a Bitcoin futures marketplace fully compliant with CFTC regulations, looking to launch it at the end of that year.

Unlike the Chicago Mercantile Exchange (CME) Bitcoin futures contracts that have been on the market since December 2017, the idea behind Bakkt is to create an instrument that would settle in actual Bitcoin upon liquidation. Whereas the value of a CME contract is delivered in cash equivalent and matched to the spot-market-based BTC price index at the time of expiration, owners of Bakkt futures get “physical” Bitcoin sent to their custodial account.

This modification could be seen as a step toward enhancing investors’ confidence in the new asset class. Presumably, as traders come to feel more serious about Bitcoin and its potential, they would prefer exposure to the actual coin rather than engaging with an instrument whose connection to the underlying asset is purely nominal.

Winning this edge over the competition, though, invoked the need for an additional operational layer: reliable custody. It would be too long of a shot to expect that conservative institutional investors would line up to buy a nebulous asset that they didn’t know how to handle safely.

This approach was bound to create additional red tape for its proponents, as it required going the extra mile to clear regulators’ rigorous requirements for entities that seek to operate as crypto custodians. Negotiations with the CFTC centered on the custodial issue stalled and dragged for several more months than ICE had initially planned.

It wasn’t until June 2019 that Bakkt secured the CFTC’s approval. Finally, on August 13, Bakkt Trust Co., the platform’s clearinghouse, obtained a charter from the New York State Department of Financial Services to operate as a custodian, marking the end of the platform’s regulatory quest.

On the day of its launch, Bakkt offered traders two types of derivatives: daily contracts, whose buyers receive their Bitcoin at the end of the same day — almost as if trading on a spot exchange — and monthly contracts, which ICE management hopes to be instrumental in longer-term BTC price discovery.

Amid overall high expectations further fueled by crypto Twitter and media hype, Bakkt failed to impress on the first day of trading, with a paltry 71 contracts sold and the volume picking up slowly in the following days. To make matters worse, the day after launch, Bitcoin price took its largest intraday hit since January, losing some 13% within Tuesday. 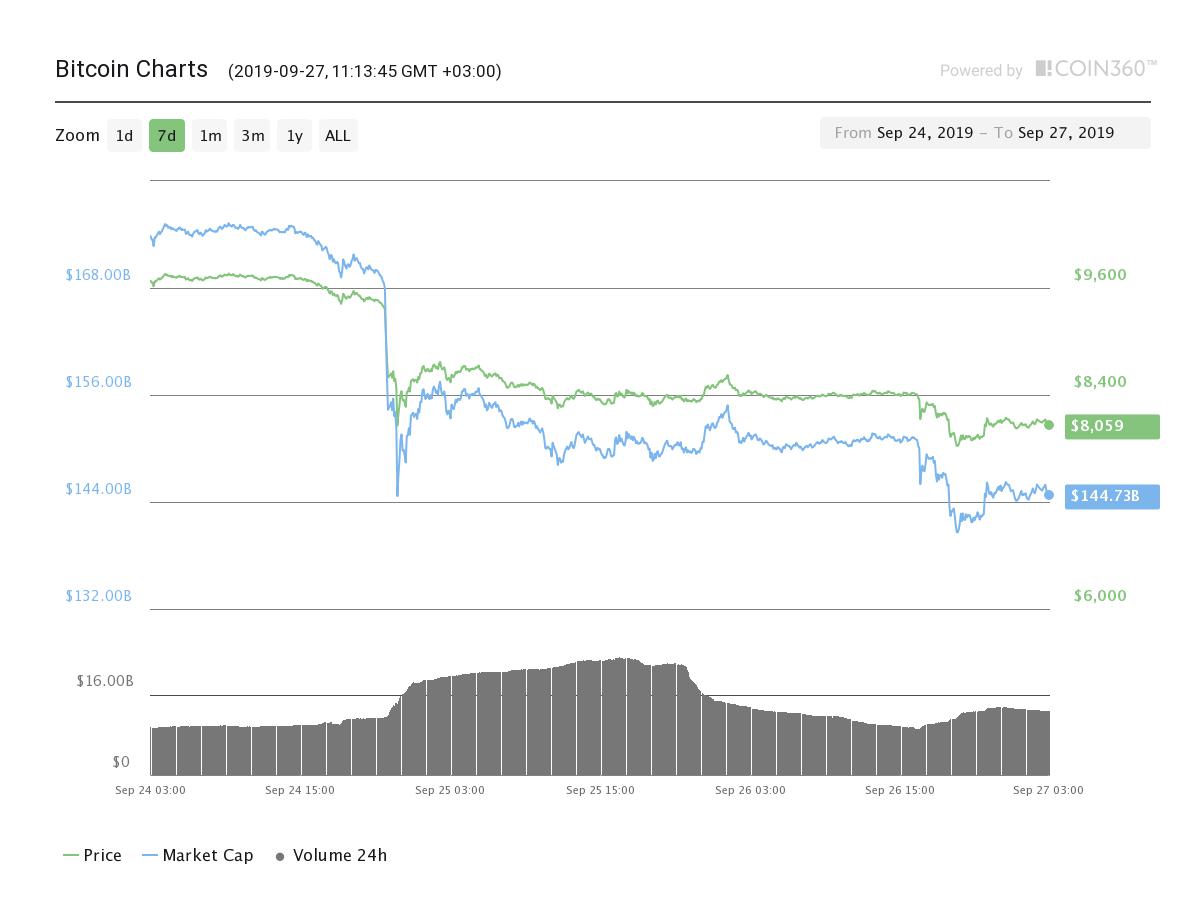 Bitcoin price declines by 13% in one day. Source: Coin360.com

Some observers were quick to suggest that Bakkt’s slow showing was to blame. Mati Greenspan, senior market analyst at digital asset trading platform eToro, told Barron’s: “The catalyst for today’s plunge, in my mind, seems to be the underwhelming launch of Bakkt. This is a prime example of “buy the rumor, sell the news.”

Others pointed out the glaring difference between Bakkt’s 71 first-day deals and CME’s 5298 trades in the first 24 hours. There was also something ominously similar between the two premieres: the day after CME futures became available, Bitcoin price took a tumble from around $19,000 to below $17,000.

In the big picture, skeptics may be tempted to conclude that such a lackluster performance of a much-anticipated regulated platform indicates the real level of interest that institutional investors have for crypto assets, and that the drop was induced after market participants suddenly realized the big money is not coming all at once.

It is quite possible that the situation is less unequivocal, however. For one, the comparison between Bakkt’s debut and that of CME’s futures is not really appropriate. Derivatives offered by the Chicago exchange hit the markets at the very peak of the December 2017 crypto craze, following a months-long race of price inflation.

Bakkt opened business within a much more sober and stable market. Furthermore, it is not just the overall crypto market, but the crypto futures market that has dramatically transformed, having become much tighter. Alex Lam, CEO and co-founder of digital asset services platform RockX, shared his observation with Cointelegraph:

“While its launch was a highly anticipated milestone for both Bakkt and the wider crypto community, its lacklustre reception attests to the highly competitive market and the current barriers to mass entry.”

A popular demand for BTC derivatives trading is well-served by a number of unregulated platforms, which still host the bulk of the volume. Marketplaces such as BitMEX and OKEx enjoy high liquidity and offer traders leverage of up to 100:1. Christophe de Courson, CEO of blockchain asset management fund Olymp Capital, told Cointelegraph:

“Since the launch of Bakkt Bitcoin futures, the intraday volume has stayed between 70 to 100 BTC which, indeed, is small when compared to BitMEX, an unregulated exchange, with more than 270,000 BTC intraday volume on September 23rd 2019. However, it is noteworthy that regulated platforms generally have a smoother launch in comparison with crypto native platforms.”

Most of the experts who have spoken to Cointelegraph on this matter agree that, given this retail-driven character of crypto trading, it is unlikely that institution-oriented ventures like Bakkt will be exerting significant influence on the overall BTC market in the near future. Fran Strajnar, Founder and CEO of cryptocurrency research firm Brave New Coin, said:

“Bitcoin and crypto trading remains a retail-led phenomenon. Accessible products available on platforms like Bitmex, and spot exchanges like Binance, are likely to continue to drive volume in the near term.”

The recent price drop could be partly driven by the reaction to Bakkt’s initial performance, but the effect should not persist for too long if it is indeed the key driver behind the observed movement.

Other developments of the week could have also contributed to plummeting prices, most notably, the inexplicable drop in BTC network’s hash rate soon after the start of futures trading. The incident still leaves many questions unanswered, as the popular explanation — that Kyrgyzstan suddenly cut off electricity to dozens of crypto mining entities at once — doesn’t seem to be compelling.

Even if Bakkt’s “physical” delivery is indeed a major competitive advantage that should entice investors at higher rates compared to cash settlement, it is barely enough to override institutional inertia that underlies traditional asset managers and funds’ reluctance to rush to the gate immediately. Tom Maxon, Head of U.S. Operations at the blockchain security company CoolBitX, said:

“When it comes to institutional investors, Bakkt’s move will probably not make much of an impact to the price of Bitcoin at first. This is because Bakkt’s product faces two major obstacles: one, Bitcoin is still too unpredictable for institutional investors, and two, institutional funds’ board of directors will continue to perceive Bitcoin as a risky asset and fund managers will face an uphill battle to include this asset within their portfolio due to fiduciary duty. […] If conservative institutions have taken this long to invest in legal cannabis, they’re certainly going to take a long time to tolerate Bitcoin.”

Attracting big money to Bakkt’s new playground will likely be an incremental process, as many of the experts who have spoken to Cointelegraph on the matter admit. Jonathan Speigner, Founder and CEO of the crypto wallet company Coin.Space, noted to Cointelegraph:

“The main reason the volume is low is they just do not have the customer base yet, it will more than likely take several more months before they see broader institutional customers using the platform. Remember institutional money has always been skeptical of Bitcoin.”

Brave New Coin’s Fran Strajnar was also willing to give Bakkt more time to prove its worth as Bakkt is likely to evolve into a gateway that will capture today’s suppressed demand for crypto trading vehicles within the institutional investment space. Strajnar added that, “This demand will take time to materialize. It’s too early to conclude that Bakkt is a failed product based on tepid demand in its first few days of trading.”

Most industry experts were also willing to commend Bakkt for bringing a unique product to the market, which, in Tom Maxon’s words, is a “bold step towards the future of Bitcoin products.” Bill Shihara, CEO of cryptocurrency trading platform Bittrex, said in a statement for Cointelegraph:

“Bakkt’s regulated futures market is an exciting moment that marks how far the blockchain industry has come. These types of markets take time to build and reach to institutional traders, so a few days of trading isn’t representative of long term potential or performance. As an industry, this is a step in the right direction.”

Meanwhile, the busy market that Bakkt has just entered is poised to get even busier: CME has recently announced plans to supplement its futures contracts with options in early 2020, while up-and-coming competitors LedgerX and ErisX are getting closer to securing regulatory approval for launching their own physically delivered futures products. Along with the overall dynamics of investor interest for regulated crypto derivatives, we will soon have a chance to learn how different players in this field stack up against one another.