Bitcoin (BTC) and “unsteady cryptocurrency mania” are the one of six factors that threaten Goldman Sachs 2018 market outlook, according to a July 2018 report by the Goldman Sachs Investment Strategy Group.

The report entitled “(Un)Steady as She Goes,” highlights “cryptocurrency mania” as one of several factors that could affect their initial market outlook for this year.  Other factors listed included terrorism, the rise of populism, rising geopolitical tensions, and an increasing threat of cyberattacks.

The investment bank expects cryptocurrency markets to “further [decline] in the future given our view that these cryptocurrencies do not fulfill any of the three traditional roles of currency...” According to Goldman Sachs, crypto is “neither a medium of exchange, nor a unit of measurement, nor a store of value.”

While the adjusted outlook lists cryptocurrency instability as a possible risk factor, it also states that “we continue to believe that such declines will not negatively impact the performance of broader financial assets, because cryptocurrencies represent just 0.3 percent of world GDP as of mid-2018.” The report adds that cryptocurrencies “would not retain value in their current incarnation.” 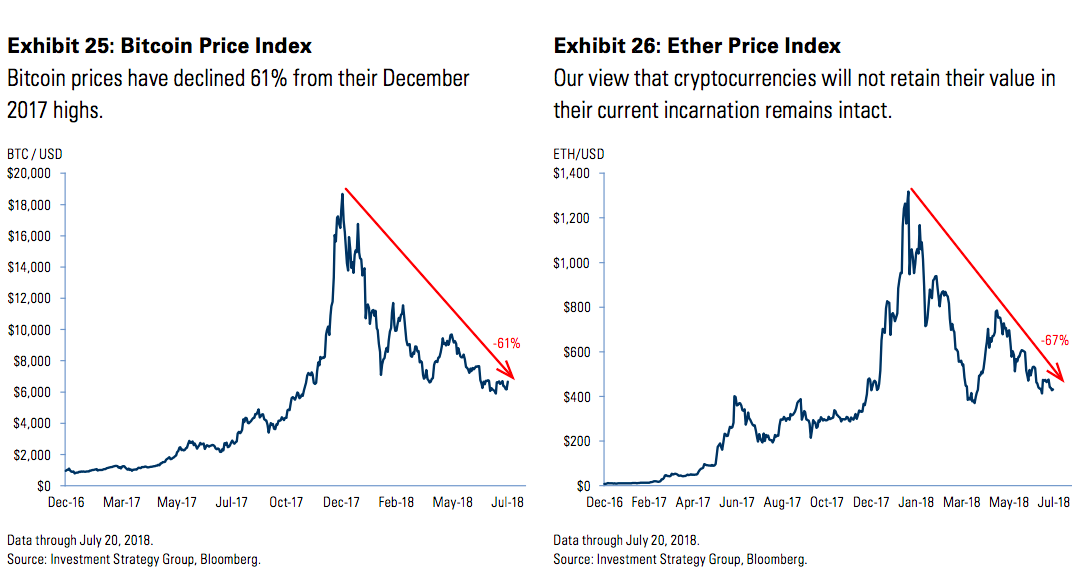 In a previous report in January, the group listed “cryptocurrency mania” as a factor that caused “higher levels of investor unease,” claiming that the sharp rise in Bitcoin's price “has pushed it into bubble territory.”

At that time, Goldman Sachs refrained from making a forecast on crypto prices, claiming that even if Bitcoin’s price would “double or triple,” the company still does not believe it will retain its value in the long term.

While Goldman Sachs’ skeptical stance on crypto “remains intact,” the investment bank’s CEO Lloyd Blankfein has suggested that the adoption of crypto like Bitcoin could happen in a similar way as that of paper money, which replaced gold and silver coins. In an interview in June, Blankfein stated that it is “too arrogant” to argue that crypto cannot be adopted on a large scale only because it is “uncomfortable” or “unfamiliar.”

The company’s COO David Solomon claimed that Goldman Sachs is exploring crypto trading derivatives, in a move to assist clients in such derivatives as Bitcoin futures and to “evolve its business and adapt to the environment.”