The week saw several wins for Bitcoin (it is “not” a security, it is “digital gold,” to name a few) and adoption gains for crypto from Argentina to Indonesia.

Steve Wozniak said this week that he sees “only Bitcoin [as] pure digital gold,” echoing previous comments by Twitter CEO Jack Dorsey about Bitcoin becoming the “single” currency of both the internet and the world. According to Wozniak, all other cryptocurrencies give up some aspects of Bitcoin that makes Bitcoin a unique asset class.

SEC Chairman Jay Clayton Believes Bitcoin Is Not A Security

After months of uncertainty coming from the SEC over cryptocurrency and ICO regulation, the SEC chairman Jay Clayton said during a CNBC interview that Bitcoin is not a security because it acts as a sovereign currency able to replace the dollar, euro, yen, etc. However, Clayton strongly implied that digital assets and their offerings will be regulated as trading of securities.

Major US crypto exchange and wallet Coinbase has begun the process to become an SEC-regulated broker dealer by acquiring securities dealer Keystone Capital Corp. in addition to Venovate Marketplace, Inc., and Digital Wealth LLC. If approved, these acquisitions will enable Coinbase to expand to other non-crypto financial products, as well as offer blockchain-based securities.

John McAfee — who last week tweeted about the creation of his own crypto-backed fiat currency — will be running for president in the 2020 US elections with either the Libertarian Party or a new party of his creation. McAfee tweeted this week his run will “provide the ultimate platform” for the crypto community.

The EOS blockchain began its launch on June 9 after a majority of “Block Producer” candidates voted “go” to launch the mainnet. The launch is still under progress at press time.

“Only Bitcoin is pure digital gold… and I totally buy into that. All the others tend to give up some of the aspects of Bitcoin,” — Steve Wozniak, co-founder of Apple

“We believe that this technology and this asset class is going to change some facet of financial services, and we think it is going to exist forever,” — Bart Smith, the head of the digital asset group at Susquehanna, on cryptocurrencies

The SEC has created a new senior advisory position for overseeing securities regulation of the cryptocurrency sector, filled by the former head of the SEC’s distributed ledger group. Valerie A. Szczepanik, the new hire, recently said that protecting investors is the best way to make the crypto industry “flourish.”

Russians will now be able to access crypto media website Bitcoininfo.ru, as a court in St. Petersburg has overruled the July 2016 decision that banned access to the site due to its crypto-related information.

Ripple Labs has appointed a former chair of the SEC to represent them in a class action lawsuit that alleges that sales of Ripple token are sales of unregistered securities. The defendant claims that he lost a little more than $551 by trading XRP, and accuses the company of profiting personally from XRP’s price increases. Ripple maintains that, in their opinion, XRP is not a security.

The governor of Connecticut, Dannel Malloy, signed a bill into law this week that established a blockchain working group that will create a plan to foster the “expansion of the blockchain industry in the state.” By the end of the year, the group will submit both a study and recommendations on how to expand blockchain in commerce, banking, finance, and other industries to the General Assembly.

After launching in investigation into alleged illegal activities at the cryptocurrency exchange Bithumb, the South Korean government has cleared the exchange of any allegations of wrongdoing. Although no evidence of tax evasion or suspicious practices were found, Bithumb was ordered to pay around $28 mln in taxes.

Leading US crypto exchange Coinbase will soon be entering Japanese markets by applying for a license with Japan’s financial regulator within the year. Coinbase is reportedly working with the Mitsubishi UFJ Financial Group (MUFG) on its path to enter Japan, as MUFG has been responsible for over 1 bln yen in Coinbase since 2014.

Bitcoin Argentina and Bitcoin Americana will be touring Argentina and Latin America in a minivan as part of a crypto awareness tour to even rural villages that they have named “Bitcoineta” (a combination of Bitcoin and the Spanish word for minivan).

This week, the Indonesian Trade Ministry’s Futures Exchange Supervisory Board has made crypto a commodity able to be legally traded on a stock exchange, while Indonesian blockchain startup Pundi X also began installing its crypto point-of-sales (POS) devices in the country. Both of these Indonesian adoption moves come as crypto remains unrecognized as a legal payment option in Indonesia.

Circle is looking to obtain a federal banking license from the Office of the Comptroller of the Currency and a brokerage and trader venue registration from the SEC as a way to expand crypto services to the public. Circle CEO says the company would be a “great guinea pig” to show the traditional financial sector how to deal with crypto.

Susquehanna International Group, an international trading and technology firm, will begin trading in Bitcoin futures, as well as allowing clients to buy and sell BTC, ETH, and BCH. The firm has also created its own systems for crypto storing, with the private keys kept off-site to make them more secure against hacks.

During this week’s Money 20/20 conference, delivery system supplier DHL announced a partnership with TradeIX with the aim of using the TIX platform to “create more efficient networks” through digitization and include more funding and risk mitigation options in the DHL product.

German insurance group Allianz, Deutsche Bank, and the Berlin-based car excahgen Auto1 have joined together in order to offer auto financing using blockchain tech with their new company “Auto1 Fintech.” The jointly-owned firm will offer insurance products and loan refinancing for car dealerships that buy Auto 1’s vehicles that will then be recorded on the blockchain. 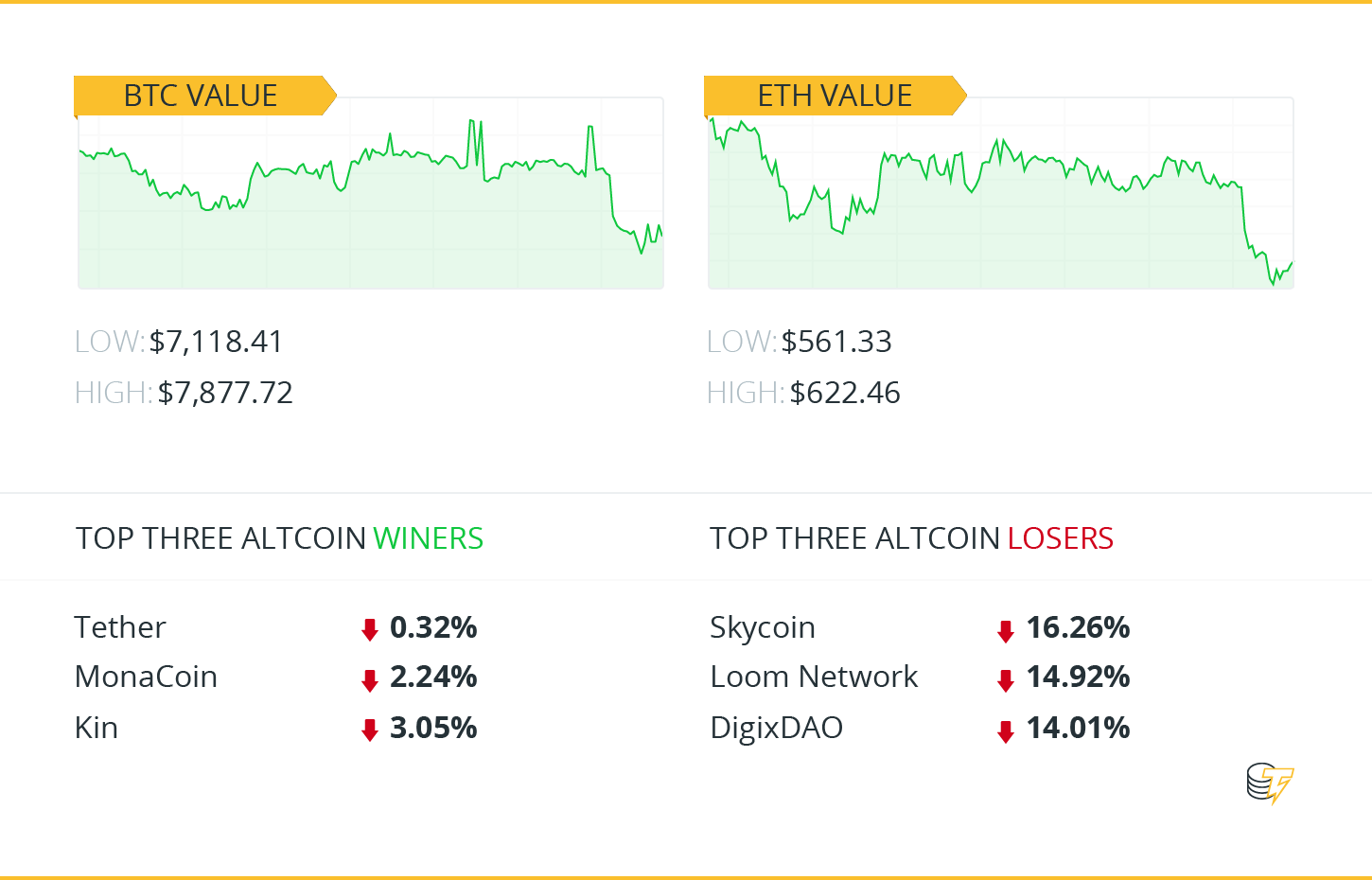 The crypto markets are still not seeing large gains with week, with Bitcoin below $7,500, ETH dancing around below $600, and total market cap at around $320 bln.

99Bitcoin obituary list has added its 300th entry this week, as a Forbes article declared the cryptocurrency “dead” due to the large amount of electricity it requires for mining. Cointelegraph would like to point out that an entity currently and actively requiring high amounts of energy may not fit the definition of something no longer alive.

Better To Own Food Than Bitcoin, Says Hedge Fund Exec

Hedge fund executive Jim Chanos — who predicted the fall of Enron — said this week that Bitcoin was “masquerading as a technological breakthrough” and that if a global crisis ever hit, it would be more useful to own food (or fiat).

The Japanese Financial Services Agency (FSA) has rejected the license of cryptocurrency exchange FSHO, whose activities had already been suspended two times by the regulator. The FSA notes their reason for the license denial is that FSHO lacks “the necessary systems to operate its business.”

Parity Technologies has found a testnet vulnerability that could spread to the Ethereum network, describing the security problem as a consensus issue that could cause Parity users transactions to fall out of step with the Ethereum network. Parity asks users to prevent any problems by upgrading to a matched version of the software that will protect the bug from spreading.

The GuardiCore security team has found a crypto mining and malicious traffic manipulation campaign called Operation Prowli on computers across the finance, education, and government industries. The attacks, whose aim was money-making rather than espionage, used exploits and password brute-forcing to take over the devices.

A report by cybersecurity company Carbon Black has found that around $1.1 bln in crypto has been stolen so far this year, citing criminals’ use of the dark web to facilitate theft. According to the report, there are 12,000 marketplaces and 34,000 offering associated with crypto theft on the dark web, with the malware marketplace worth an estimated $6.7 mln.

Learn more about Irish conceptual artist and photographer Kevin Abosch’s path to turning himself into a coin, which involved creating 10 mln IAMA tokens and stamping their addresses with six vials of his own blood on pieces of paper.

A Guide for Blockchain Usage Metrics

Blockchain industry analyst William Mougayar on how to we need to find tokens that are “actually used” to bring “sanity” into our evaluations.