How MIT Joined Ethereum in the Race for the PoS Blockchain

Security, scalability, decentralization: What will the first proof-of-stake blockchain by MIT look like and why might it become a threat to Ethereum?

As reported by Cointelegraph on Jan. 24, the press service of the Massachusetts Technical Institute (MIT) announced the development of a new cryptocurrency design based on the proof-of-stake (PoS) protocol.

Ethereum — Algorand’s closest competitor, according to the existing estimates — will launch its PoS system sometime between 2019 and 2021. Scheduled updates required for a gradual transition from the proof-of-work (PoW) to a PoS algorithm have been regularly postponed by the Ethereum Foundation due to network vulnerabilities and failures in the process of the network’s upgrade.

Trilemma: It's all about scalability

The term “trilemma” was first used by Vitalik Buterin when referring to the phenomenon when only two of the following parameters can be achieved at the same time within the framework of the blockchain 一 security, decentralization and scalability. If the first two qualities successfully coexist in the current state of the blockchain, the final one has not yet been achieved.

The fact is that the current blockchain system is designed in such a way that each node stores information about the entire network and processes all transactions. This mechanism provides a maximum degree of security but, at the same time, reduces scalability. The blockchain cannot process more transactions than is processed by a single node. That is why Bitcoin currently processes about three to seven transactions per second (TPS), and Ethereum about seven to 15 TPS. 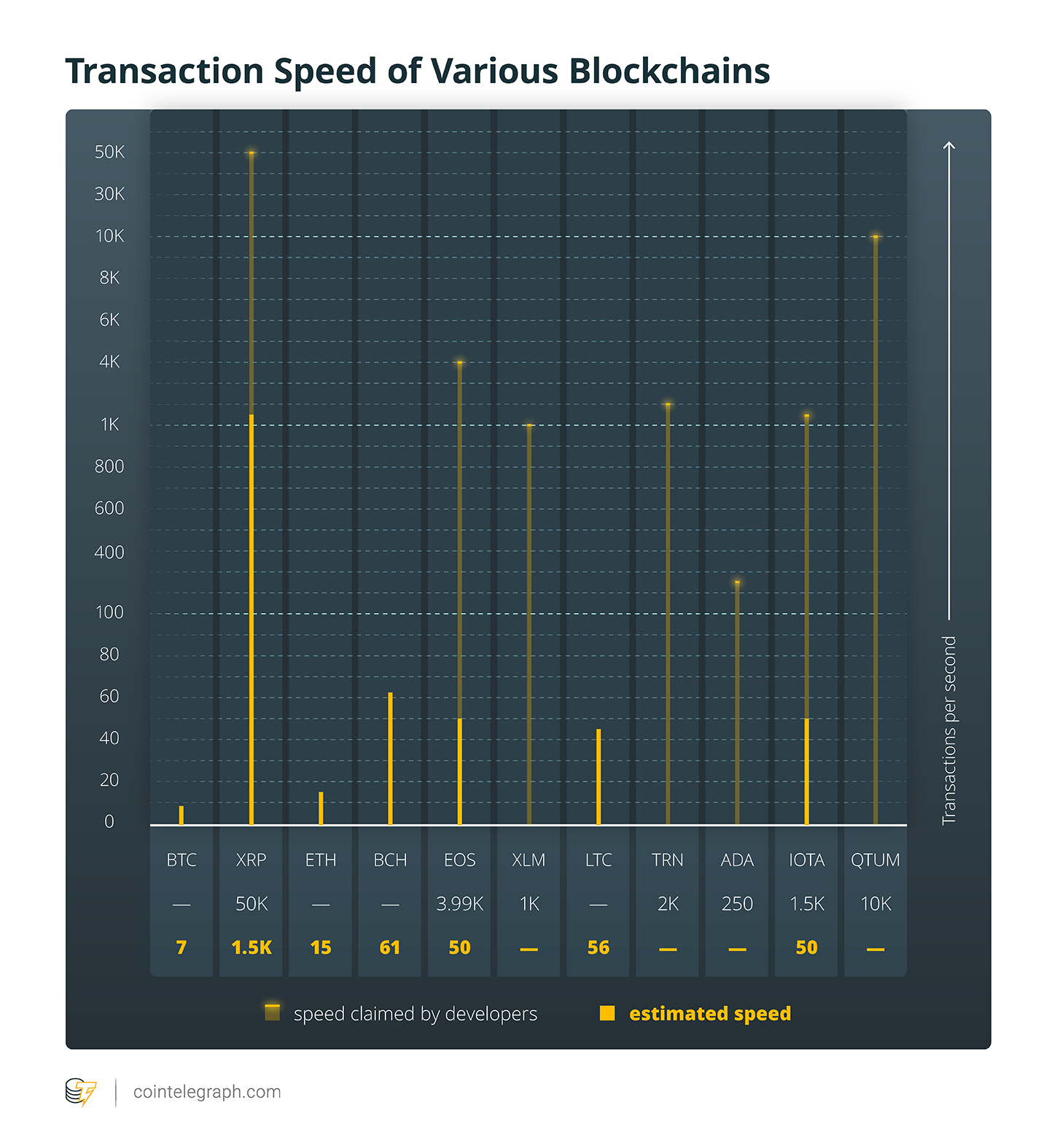 Ethereum’s perspective on the scalability 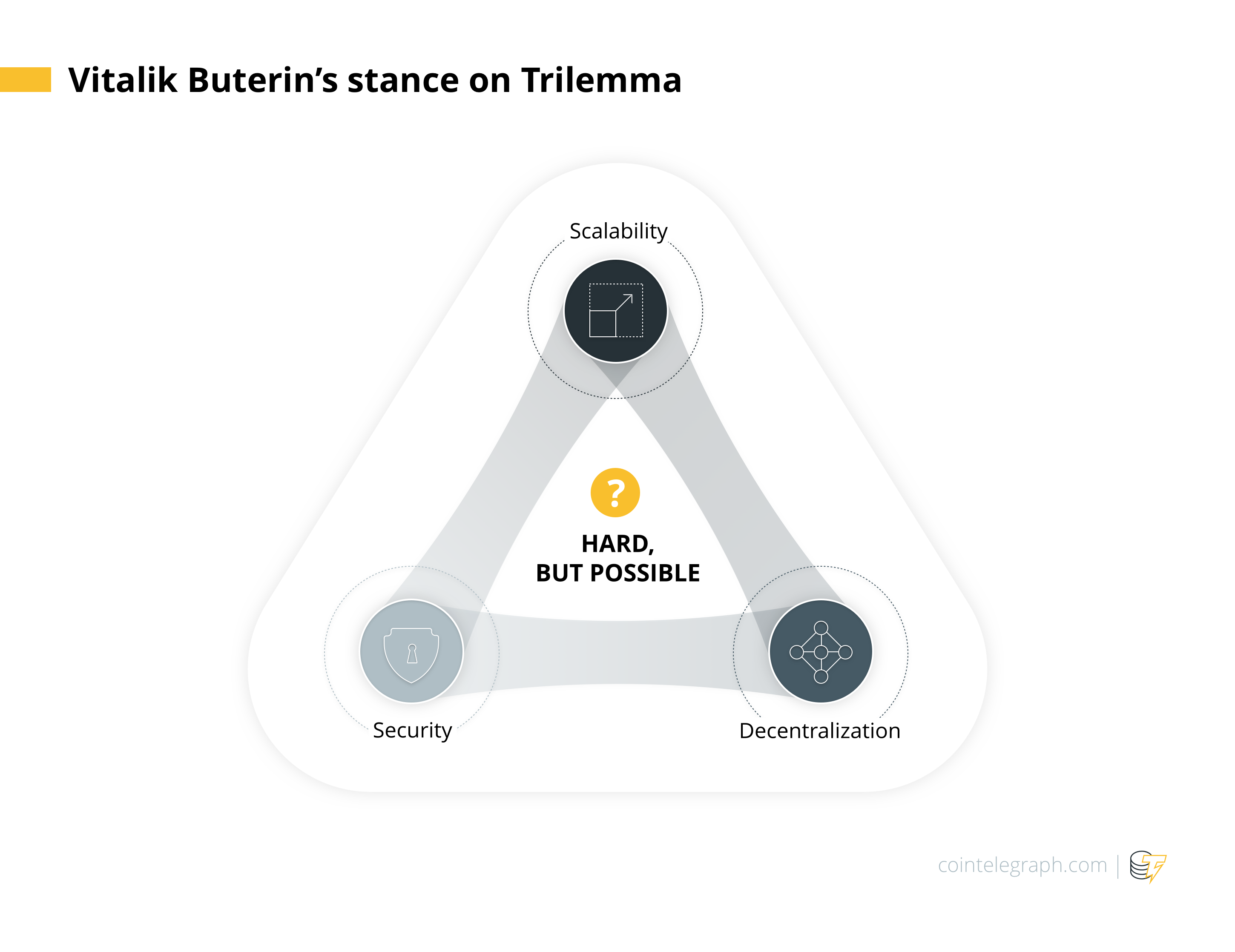 In order to find a solution, the Ethereum team has developed an entire roadmap, which provides a framework to gradual transition to a PoS consensus within the Casper project, as well as Ethereum's layer one and layer two solutions.

The layer one is represented by sharding, which splits the global network nodes into groups (segments), so each group of nodes has the same bandwidth as the current Ethereum network. Then they are connected to each other through cross-references, so the network remains unified and receives almost unlimited scaling opportunities, depending only on the total number of full-featured network nodes. Development of the layer one includes channels similar to the Lightning Network, such as the Raiden Network and the model of the “childchain,” or sidechain, on which the Plasma solution is based.

The complexity of these mechanisms, as well as the fact that some of these changes, especially intra-network adjustments of protocols, require coordination between the relatively large user base and Ethereum developers, have caused the launch dates of the various phases of the roadmap to be postponed several times, with developers reconsidering the security settings. 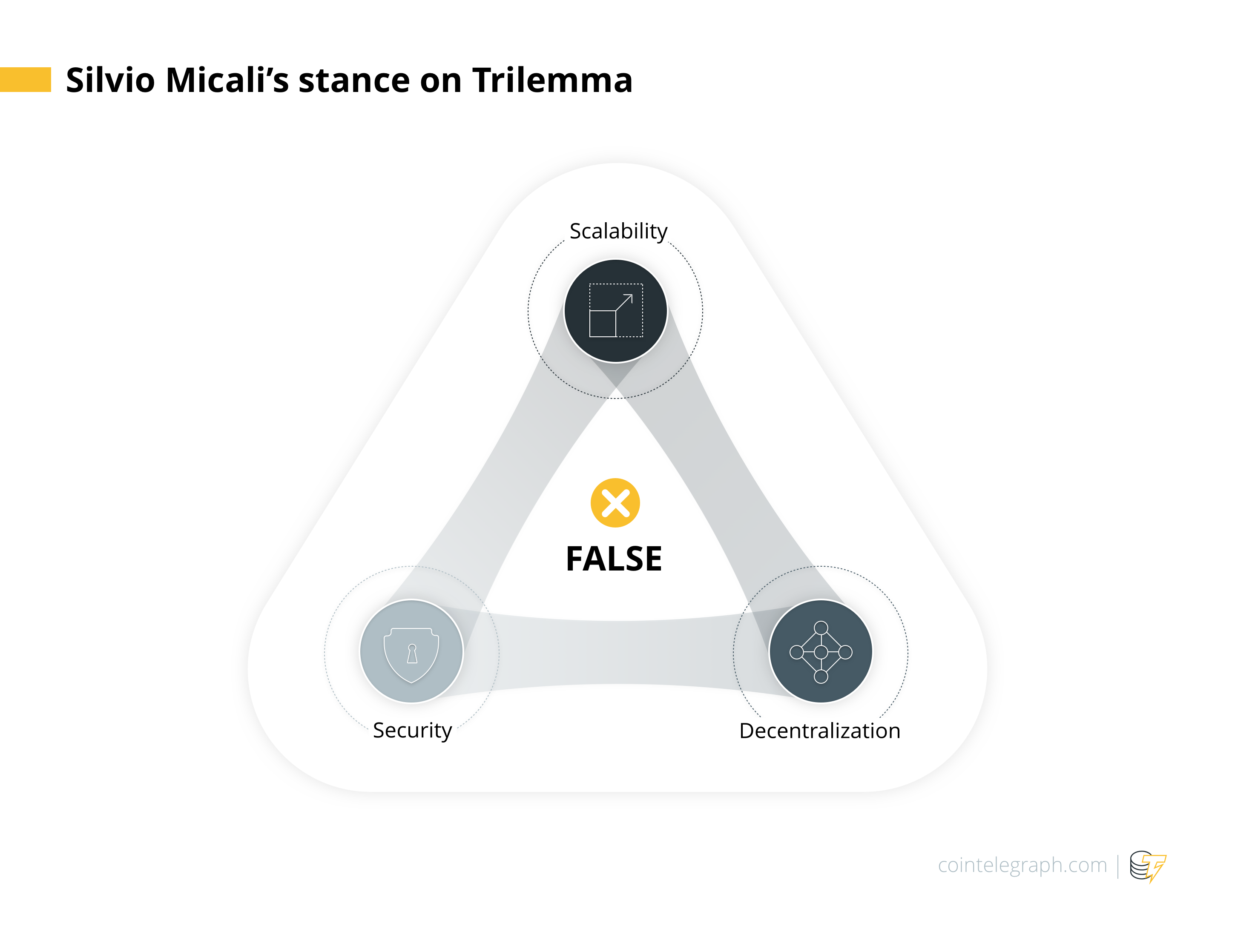 Algorand intends to get ahead of Ethereum and release pure PoS later this year. The new cryptocurrency design — named Vault — will work on the basis of the Algorand blockchain, which was first presented at the Financial Cryptography and Data Security Conference on April 4, 2017.

The author of the solution is Silvio Micali, a professor at the MIT and recipient of the Turing Award, who, in 1982, together with Shafi Goldwasser, created the first public-key probabilistic encryption system. According to Micali, trilemma is false:

“The trilemma is false. The fact that 2000+ prior blockchain projects could not simultaneously be secure, scalable and decentralized is not proof that achieving all these three properties is impossible.  Algorand exists to solve this exact challenge and we are advancing the limits of blockchain by means of technological breakthroughs like our pure of proof stake algorithm.”

The creators of Vault and Algorand promise users that they will not have to download the entire blockchain to their computer. This requires only a small part of the information about operations in the network.

“With Vault, a blockchain compression technology, we want to make sure that Algorand will avoid the storage and bandwidth costs associated with other blockchain protocols, which in turn make it a more viable blockchain solution for companies to adopt. The most exciting parts of Vault are that it frees up local storage on nodes, distributes the storage costs of the Algorand blockchain across different parts of the network by sharding (without sacrificing security), and reduces the bandwidth required to join the network by allowing new nodes to avoid checking every block since day one.”

The technical presentation of the project prepared by MIT states that the Vault’s block size is 10 megabytes, which is equivalent to 10,000 transactions, and each block contains a hash of the previous block. For comparison, to verify transactions in the Bitcoin network today, the user must download 500,000 blocks with a total data volume of about 150 gigabytes. At the same time, MIT assumes that it is required “to keep all account balances in order to check new users and ensure that they have enough funds to complete the transactions.”

To reduce the amount of stored data, Vault applies a special principle of data separation. Vault’s blockchain, like Bitcoin, stores transactions in a Merkle tree, but it is divided into fragments assigned to different groups of users. Each of them needs to store transactions only from its fragment and root hashes. For verification of transactions outside the assigned fragment, a special method has been developed for searching a group of nodes that intersect the entire tree. So, there is no need to check all the blocks from the very beginning.

Ethereum developers plan to scale the PoS network with the interaction of two layers 一 sharding and Plasma, in which, according to Buterin, it will be possible to conduct tens of thousands of transactions per second.

“If you add 100x from Sharding and 100x from Plasma, these two together basically give you a 10,000x scalability gain.”

The Ethereum foundation suggests a PoS blockchain model in which nodes can work in parallel – “shardchain.”

The model is quite similar with the one used by Algorand, and implies that each node has to carry a small part of data in order to complete a transaction — and each shardchain is a separate blockchain having separated accounts, state and transactions.

“Imagine that Ethereum has been split into thousands of islands. Each island can do its own thing. Each of the islands has its own unique features and everyone belonging on that island, i.e. the accounts, can interact with each other and they can freely indulge in all its features. If they want to contact with other islands, they will have to use some sort of protocol.”

In order to achieve high bandwidth, Ethereum plans to process part of the transaction outside the blockchain by means of its second layer, Plasma.

Plasma may be regarded as a childchain that could run entire applications featuring thousands of users with minimal interaction between it and the Ethereum mainchain. However, this childchain would also be able to produce its own childchains, essentially creating numerous branched blockchains, all of which are connected to the mainchain. Since operations on those sub-chains won’t have to be replicated across the entire mainnet, they could move a lot faster and reduce transaction fees.

Unlike similar solutions from other projects — for example, EOS — Algorand will work on a pure PoS system, Micali said:

“Algorand's consensus model is a Pure Proof-of-Stake (PPOS) model based on a Byzantine agreement protocol. This means that the blockchain is distributed and fault tolerant without any form of centralization and will continue to function as long as more than two thirds of the currency is in honest hands.”

The secret is in the use of a Verifiable Random Function (VRF) — created by Micali back in the 1990s — which performs a secret cryptographic sortition to select committees to run the consensus protocol. This allows the Algorand blockchain to reach the scale and performance necessary to process transactions of millions of users.

“Essentially, when a new block is proposed to the blockchain, a committee of ‘voters’ is selected to ‘vote’ on the proposed block. If more than two-thirds of the ‘votes’ are cast by honest users, then the block is deemed valid and will be certified. Committee members are chosen based on the number of algos they have. Committees are made up of randomly selected accounts with voting power dependent on their online stake.”

Will the trilemma be solved?

Despite the repeated delay of the Constantinople release — a fundamental intermediate update on the road to PoS — Afri Johnson, an Ethereum developer, assumes that Ethereum 2.0 and PoS will not be delayed, since they are being worked on by several independent teams and will go live soon:

“Furthermore, it's important to understand that Proof-of-Stake, the so-called ‘phase 0’ / the ‘beacon chain,’ will not be a hardfork, unlike other milestones. We will see beacon chain testnets very soon, within weeks or months. And I expect that we can reach the Serenity milestone within a year, optimistically speaking.”

During one of the latest presentations of Ethereum 2.0 on Oct. 31, Buterin suggested that its launch is not so far away. Earlier, he said that the blockchain in its current state is doomed until PoS starts functioning.

I think I've been pretty consistent about my view that (i) every present-day existing blockchain, including ETH and BTC, sucks, and (ii) PoS is necessary. Not sure why anyone surprised.

Micali feels more confident in setting the release dates for Algorand for 2019.

.@rhackett @FortuneLedger— 2019 will also include the launch of @Algorand a credible blockchain platform that solves the Trilemma. With maturing science & tech, I believe 2019 will have a more equal playing field where businesses & people participate & benefit from these projects https://t.co/b6qX8h30Nm

The latest version of Vault will be presented at the Network and Distributed System Security (NDSS) Symposium in late February.