The future will see Bitcoin take ever more market share from altcoins, says the well-known trader, and even cause the “destruction” of competitors such as Ethereum.

Bitcoin (BTC) will cement its dominance over the cryptocurrency market next year in a fresh blow to altcoins, a veteran trader has said.

In the latest episode of his Trading Bitcoin YouTube series on Dec. 22, Tone Vays warned that altcoin traders faced even worse conditions as 2020 begins.

Continuing, Vays explained that Bitcoin further strengthening its market position would echo gains it already secured this year — dominance is currently 69% versus 51% in January. As a percentage against its position in January 2018, Bitcoin dominance is up 87%.

For him, in the long term, the figure could expand to see BTC all but usurp altcoins altogether: 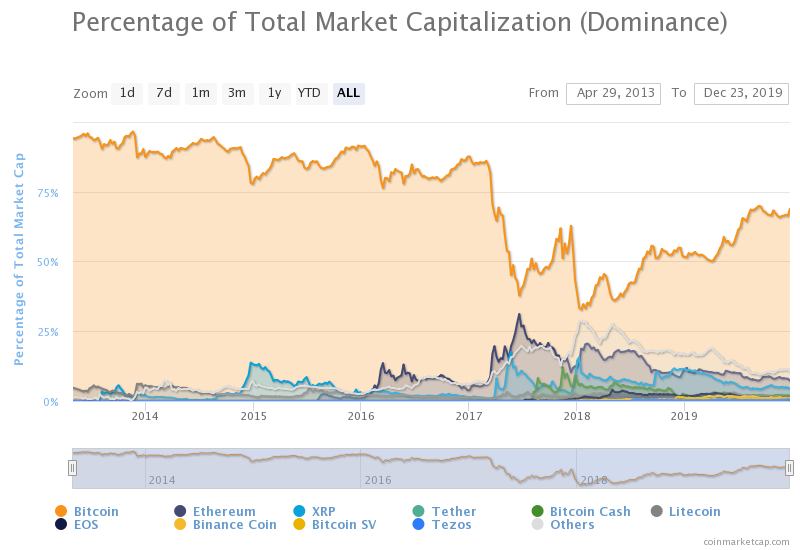 The fundamental factor driving Bitcoin’s success would be the hash rate strength. Since BTC/USD hit its all-time high in December 2017, the hash rate has grown by 800%, something Vays describes as “incredible.”

Hash rate refers to the overall computing power miners choose to devote to validating the Bitcoin blockchain. Despite lower prices, interest and competition among miners continue to expand, also resulting in a more secure Bitcoin network.

“Show me another sh*tcoin that has this kind of hash rate growth,” he argued.

Famously unconvinced about the potential role for alternative cryptocurrencies, Vays went on to predict that Bitcoin’s Liquid sidechain product would ultimately “destroy” the utility of competitors.

Specifically, these are Ethereum, EOS and Cardano, all of which have accompanying altcoins for their platforms in the top twenty cryptocurrencies by market cap.

Vays has not always been so clear cut on Bitcoin’s outlook. Responding to a mainstream media interview covering investor Tim Draper’s $250,000 Bitcoin price prediction, he claimed such bullish forecasts had made him “more bearish.”

By contrast, he told crypto media network BLOCKTV on Sunday, a $50,000 BTC/USD price by 2023 was still reasonable.